The school year is starting up again, and our site’s Steven Cohen recently wrote up a Gear Buying Guide for College Dorms that includes HDTVs, speakers, streaming services and more. I don’t know how old you are, but I sure didn’t have this fancy stuff when I went to college. In today’s Roundtable, we reminisce about the crappy gear we were stuck with back in the days when we lived in dorm rooms.

I started college in the fall of 2005, a transitional time when flat-screen HDTVs and SD tube TVs still coexisted peacefully together, and quality high definition was still a premium product for customers with far deeper pockets than my own. With that in mind, I began my undergrad education with a 20-inch standard definition Toshiba CRT TV in my very own room. Though it may not have had the same pixel count as my current plasma, it really was a pretty great set… that is, until it broke during my sophomore year right as I was reaching the half-way point in ‘The Legend of Zelda: Twilight Princess’.

Of course, I didn’t mind so much because it gave me a great excuse to use some of my hard-earned scholarship money on my very first HDTV, a 32-inch 720p Samsung LCD model. Yes, textbooks would have probably been a more responsible purchase, but I had a princess that still needed saving! That set ended up lasting me until my senior year when my HD enthusiasm (spurred on by reading Blu-ray reviews on this very site!) led me to use my hard-earned Circuit City summer job cash to upgrade to a 46-inch 1080p Samsung LCD model. Though the damn thing took up most of my room, it was one of the best TVs I’ve ever owned and still looks great to this day. It now sits in my parents’ bedroom back in Florida.

Outside of some solid Klipsch 2.1 desktop computer speakers (which I still use now), I didn’t invest in any audio gear back in college, but both my roommates were rocking full 5.1 systems in their rooms. To be clear, we were in an off-campus apartment, not a dorm… and my roommates were crazy. I did proudly own an HD DVD player that I bought during a big sale right before the format received its final blow, and I eventually relented and bought a PS3 when the format war came to an end. In fact, my Blu-ray collection first began in that college apartment and it hasn’t stopped growing since.

For some reason, I was determined to go to college and live a monk-like existence of study. Given the ratio of guys to girls at RIT back then, half of that monk-existence was easy to maintain. But when you’re addicted to movies, you can only go so long without a way to watch them. By the second or third week, my roommate and I had bought Movie CDs (Remember these? No?) of ‘The Player’ and ‘Friday’ at CompUSA. (Remember that? No?).

They were a terrible way to watch movies. Most of the time we would stack couches on cinder blocks in the common area, in order to make rough stadium seating to watch ‘Star Wars’ marathons. Around Christmas of my freshman year, I went to Circuit City (Remember that? No?!!) to buy my first DVD player, which I paired with a used TV that I was forced to buy at a junk shop after my dorm neighbor blew out my grandfather’s old TV while trying to repair a finicky power switch.

During my first semester in college, my Aiwa Pro Logic five speaker plus sub sound system was the home theater highlight. I set it up along with my 19″ Magnavox TV and Sony Stereo VHS in my apartment bedroom. My roommate also had a 19″ Magnavox TV and Sony Stereo VHS, which we set up in the main room. (I think he had a 13″ TV in his bedroom.) I had an N64 and a Pentium I PC, which later became my first DVD player via a Creative Drive and a RealMagic decoder card with remote. We sprung for two phone lines, and then passively fought over them. In the spring, we got a nice intro deal on premium cable boxes. I can recall quite vividly that our downstairs neighbors hated my Aiwa. 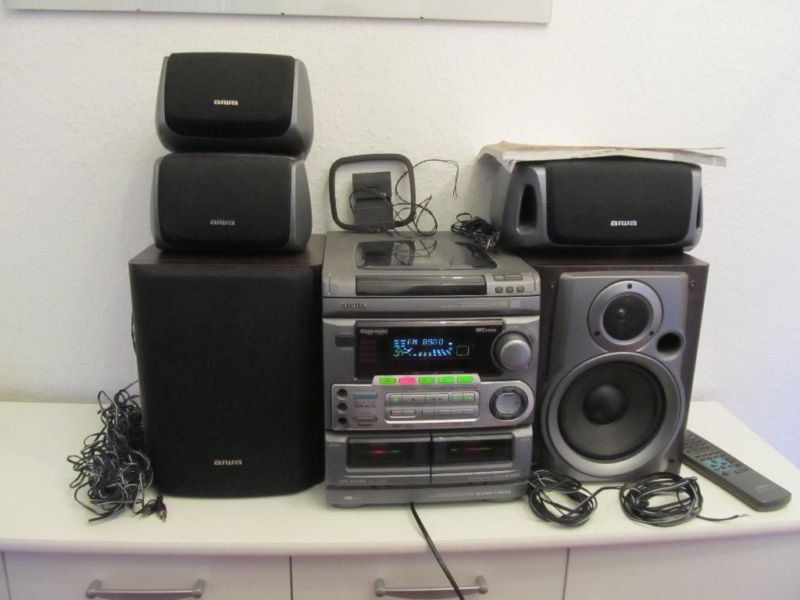 From the time I started college in 1996 to my graduation four years later, my TV more than quadrupled in size. That sounds much more impressive than it actually was, though. For my freshman year, I’d brought with me a 13″ TV I’d gotten for Christmas five years earlier. It was so basic that all it had was an RF input. At some since-forgotten point, I upgraded to a cheap 19″ set, and I’m pretty sure that was RF-or-die too.

I didn’t have a sound system to call my own at the time, or at least not one that I used for anything but CDs. I always had roommates with a VCR, although I don’t think I brought one with me. I was more of a PC gamer back in those days, so I didn’t have a videogame console with me back then either.

In the fall of 1999, I rang in my senior year with a new 27″ TV and a DVD player. That was practically a big screen by Clemson dorm standards, and I don’t think anyone else I knew had a DVD player at the time. I would say that I can’t believe how much things have changed over the past twenty years, but I refuse to acknowledge that my first day of college was anywhere near that long ago.

Freshman year (1984), I had a turntable, a stereo receiver, cassette tape deck and speakers. The speakers were really cool flat panel transducers from a company called Bertagni Electroacoustic Systems (BES). I loved that wide open flat panel sound, though they weren’t great with the bass.

While in college, I picked up a huge (25″) Sylvania CRT TV and a VHS HiFi VCR which we used to watch movies in the dorm and later in the townhouse apartment I was in during junior and senior years. There wasn’t much surround sound gear at the time. I think it was shortly after college (late ’80s) when I picked up a Yamaha DSP1 Dolby Surround decoder. But even without surround, the system was pretty sweet for its time. Our place was a popular hangout for watching movies or MTV’s ‘120 Minutes’ video show. It helped that we usually had beer. (It was Piels… we were on a budget!)

I didn’t bring a TV with me to college. That would have been too much to haul from Florida to Boston, and I couldn’t afford to buy a new one when I got there. Instead, I relied on my roommates to have televisions while I brought my VCR (four heads!) and collection of tapes. As it turned out, my first roommate was a raging fratboy prick and I tried not to spend much time in the room anyway.

My roommate sophomore year was much better. As I recall, we jury-rigged a way to hook my VCR up to his 12″ computer monitor. I’d estimate that the CRT tube had about 30% overscan, so you can imagine how much fun it was to watch tapes that had already been panned-and-scanned on that screen. The only option for sound was the tinny speaker (singular) built into the monitor.

For music, I had a state-of-the-art Sony Walkman cassette player that I bought for $15 (headphones and all) at Circuit City. It crapped out after a couple months of use.

I satisfied my need to watch movies not in the dorm at all, but at work. I had the best Work Study job ever. The college’s Media Lab was a small room crammed with televisions (some up to a whopping 25″!), VCRs and, best of all, a pair of Laserdisc players. I worked the night shift every evening from 5 PM to 9 PM. I was the only person there at that hour. The entirety of my job was to simply be present in case a professor came in needing a TV to use in class. If that happened (which was maybe twice a week, sometimes not even), I’d make him sign a sheet and then I’d point to a cart he could wheel down the hall. Then I waited for him to return it. That was the sum total of my responsibility. In between those small flurries of activity, I’d watch Laserdiscs that I rented from a shop near campus. (Nobody ever signed out the Laserdisc players.) A four-hour shift typically meant two movies a day, every weekday for four years. Forget all the time I wasted in film studies classes; that’s where I got my education.

Do you think that, someday a couple decades from now, the kids entering college today will look back and bemoan the primitive 50″ flat panels they once suffered with in their dorms? I mean, geez, they don’t even have full immersive holographic VR projected from a device the size of a postage stamp or anything! (“What were postage stamps, dad?” they will ask.)

What kind of gear did you have in your dorm room? Tell us in the Comments.