Aargh! It’s right on the tip of my tongue. What movie is it that Demon Wind reminds me of? Maybe you could help jog my memory.

A group of twentysomething-year-old friends all arrive at a ramshackle place in the middle of nowhere. 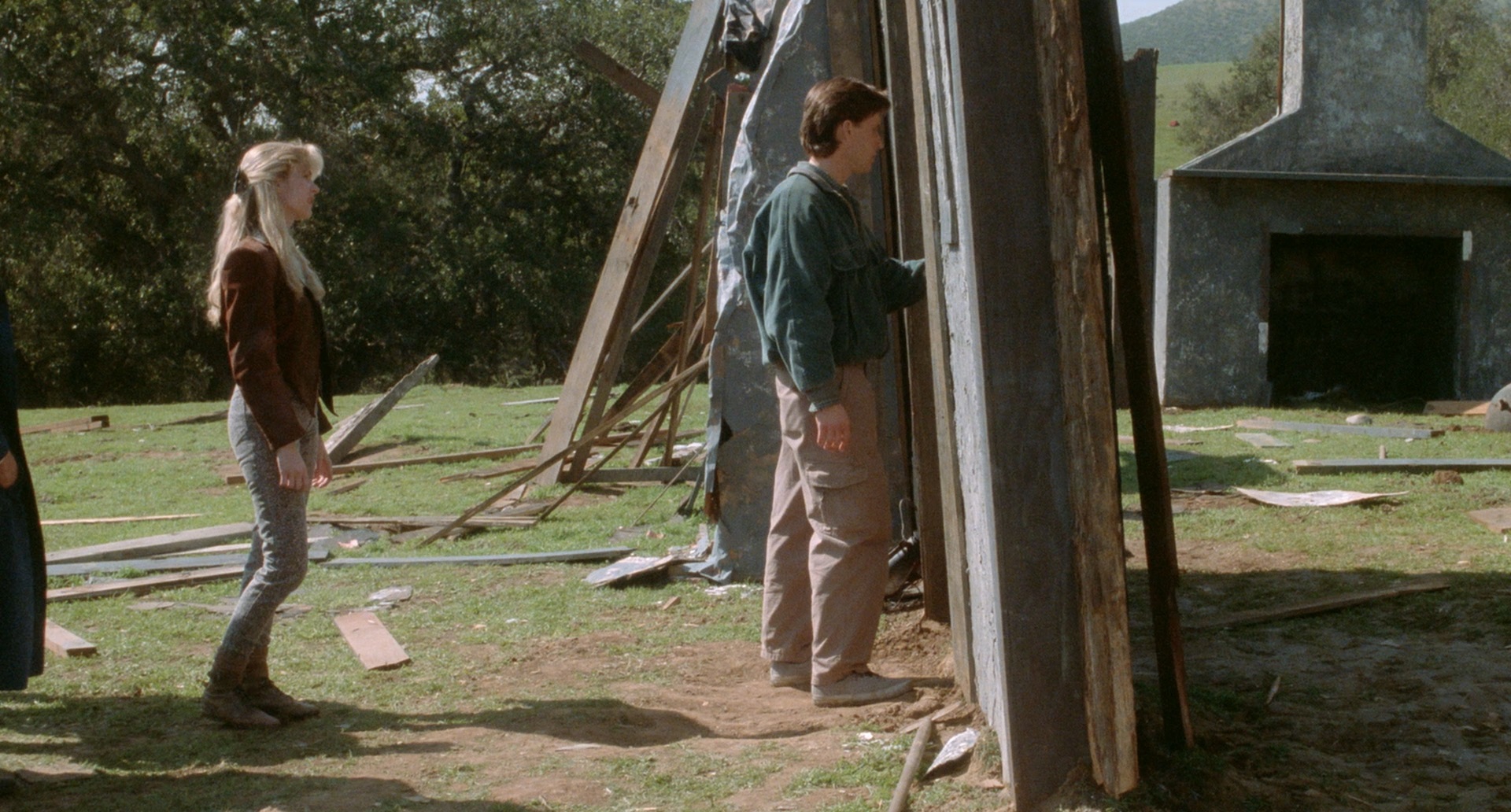 Some sinister, faceless entity is – for a while, anyway – embodied as howling wind (plus an ’80s music video fog machine, but who’s counting?). 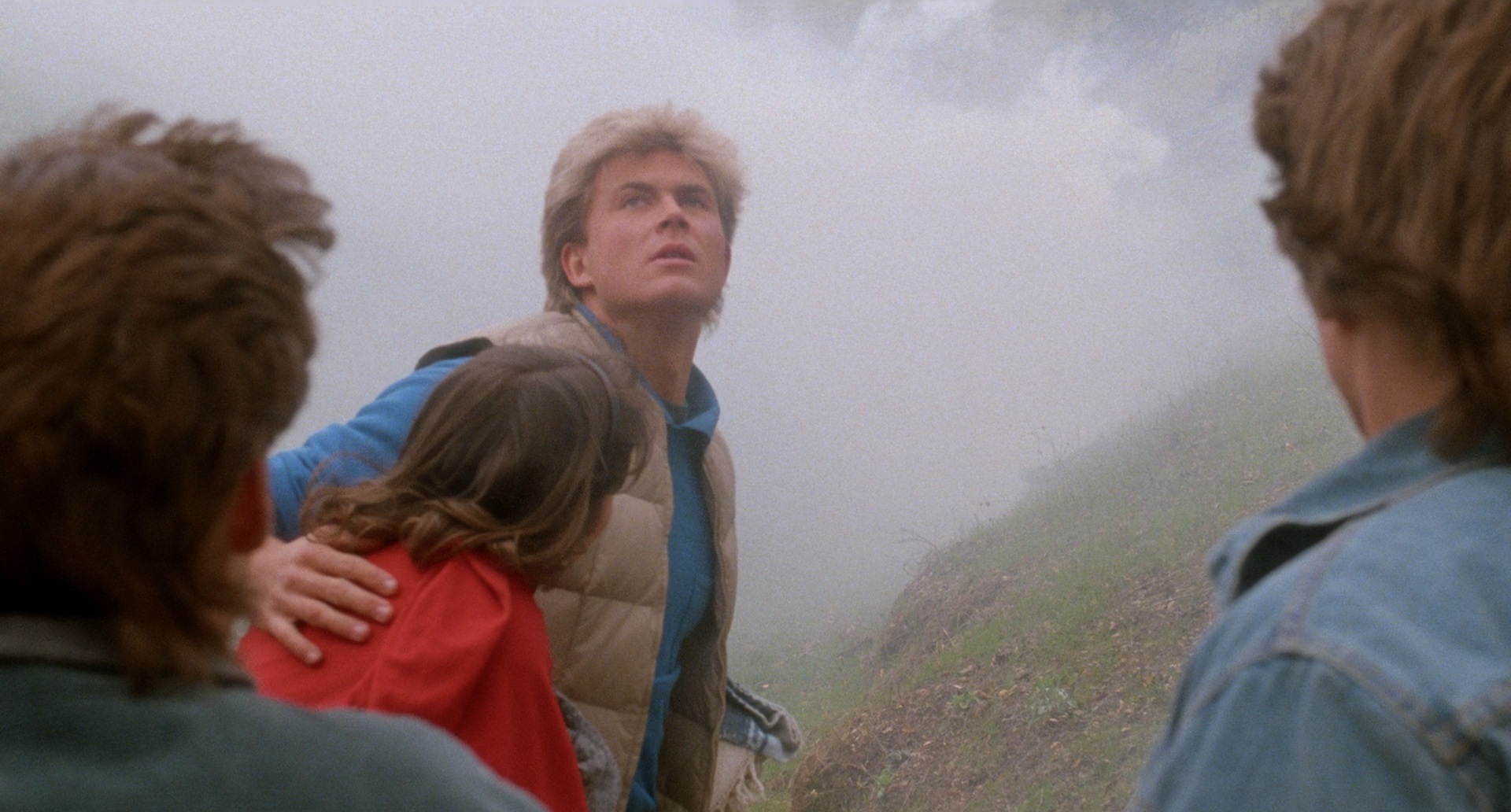 This nefarious force will not let them leave. But hey, at least the gang has a roof over their heads and some decent reading material. You’ve just gotta be careful what incantations you speak aloud. 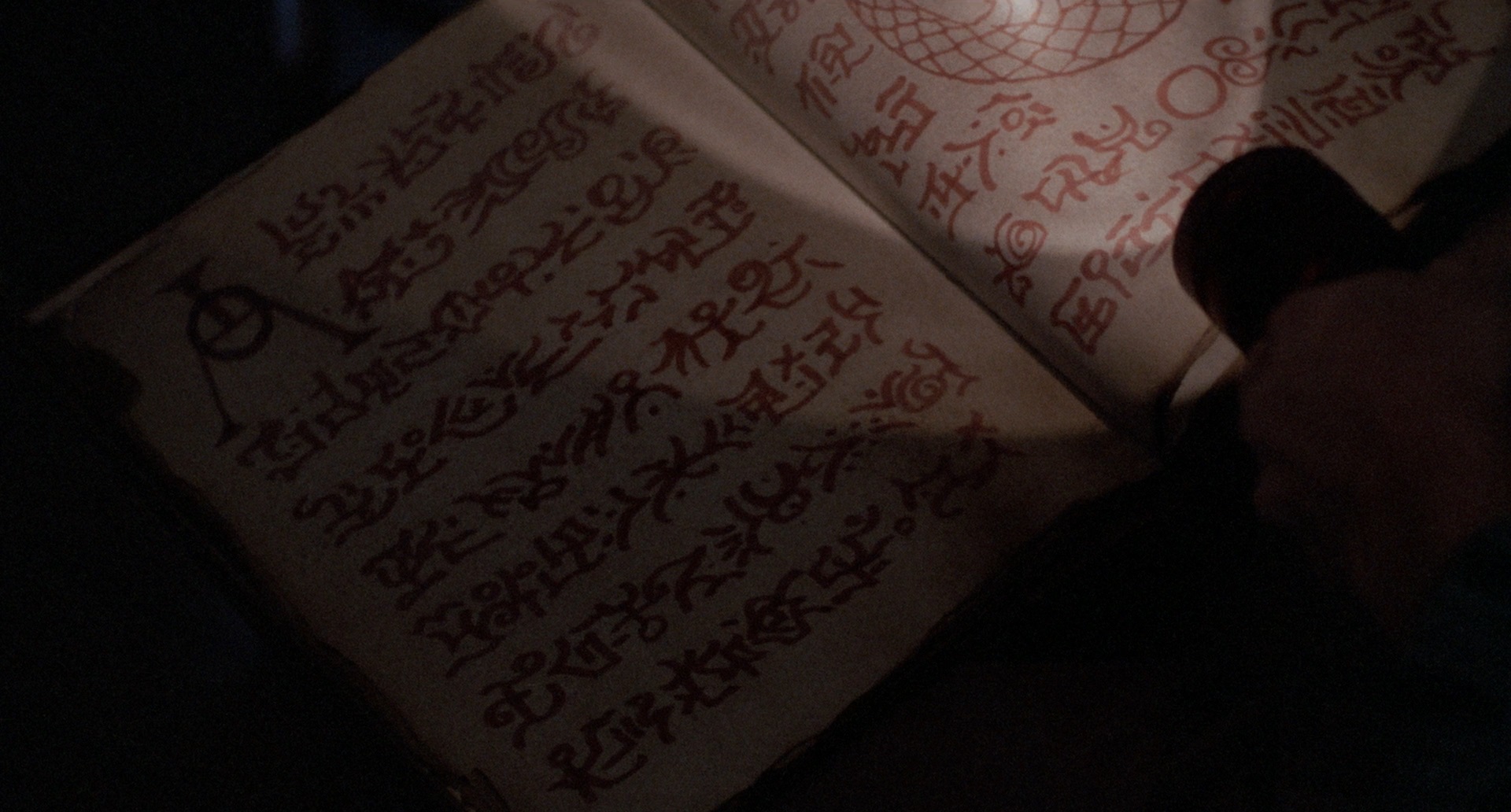 Ooh! Look: his and hers demon-killing daggers. 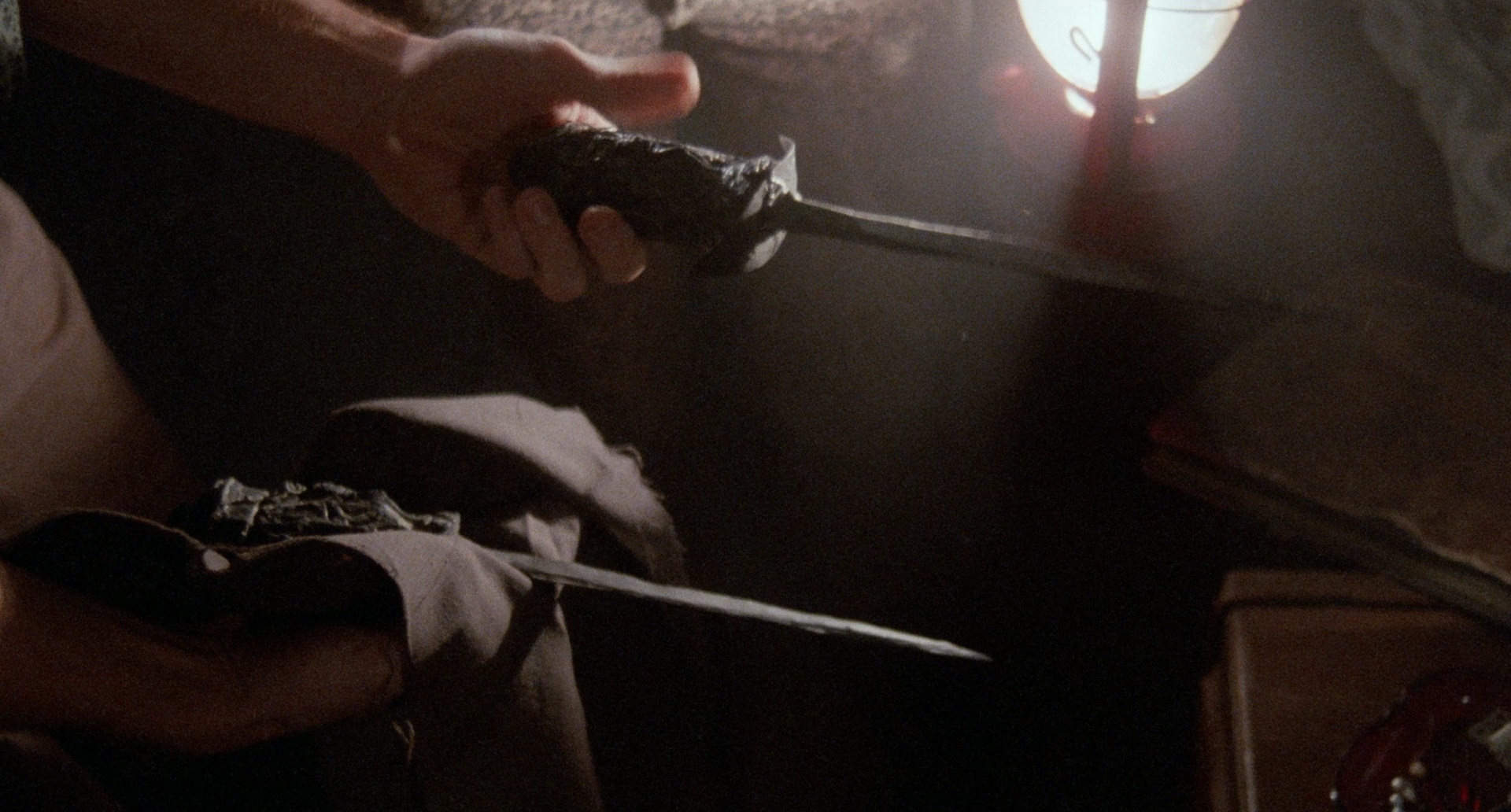 And I guess it follows that… yeah, demons. 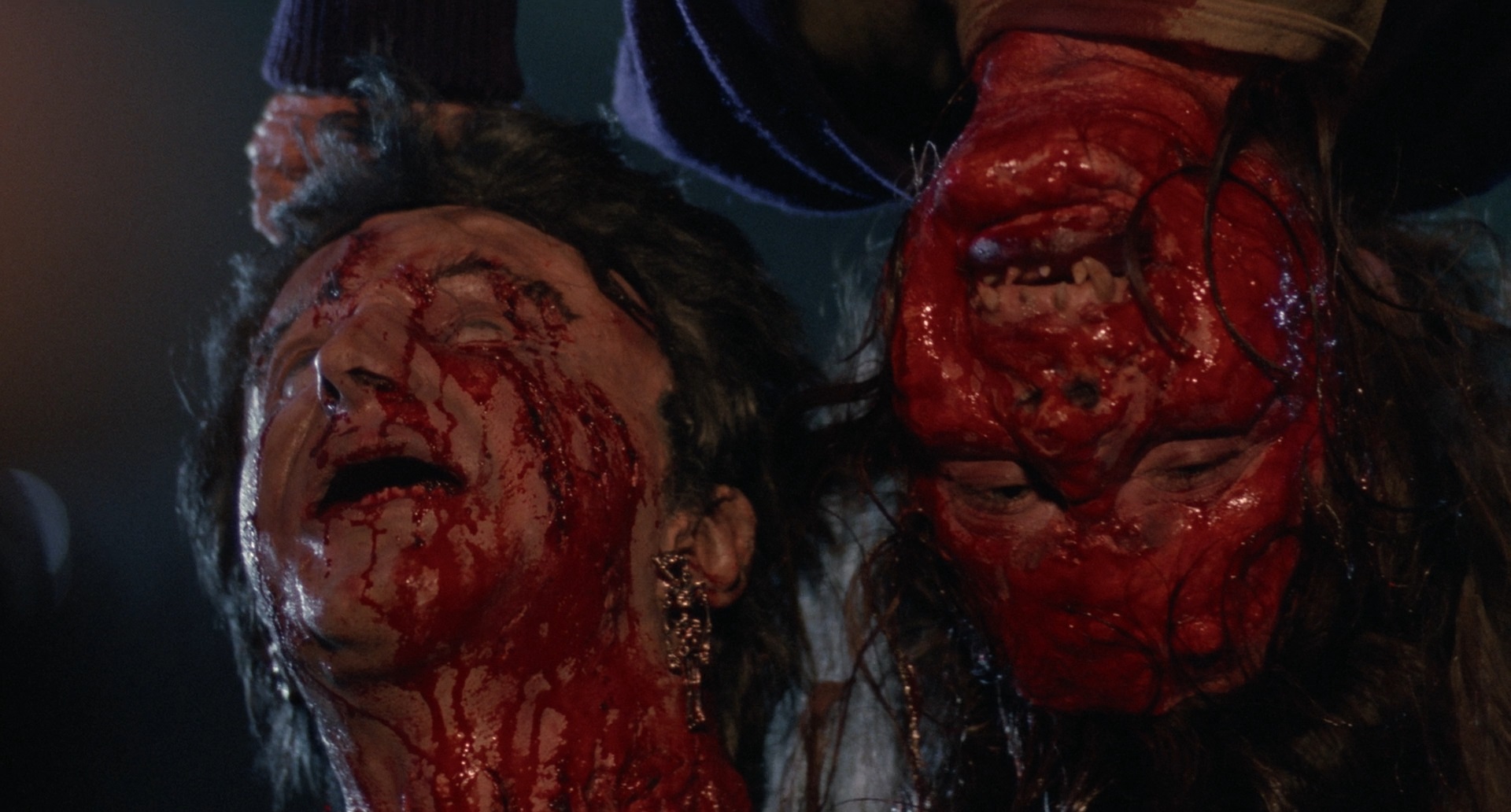 You obviously get where I’m going with all this. If Demon Wind had been content to settle for shamelessly knocking off The Evil Dead, it still would’ve had my attention. Better still, writer/director Charles Philip Moore filters that stone-cold classic’s key beats through Night of the Demons. More friends never before mentioned keep showing up to ensure there’s a steady supply of lambs for the slaughter. Demon Wind has that same gloriously ridiculous sense of humor seen in a lot of the horror that closed out the ’80s, aiming more for crack-open-a-brewski fun than abject terror.

There’s hardly even any point in recapping the plot. Still reeling from his father’s suicide, Cory (Eric Larson) rings up half his graduating class to meet him at what’s left of the family farm. (You see, the house exploded because Grandma threw a snowglobe at the floor prior to Paw Paw Demon’s deathstroke.) And, yeah, they inadvertently summon a demonic force that revives the long dead and eventually consumes these kids’ souls as well. 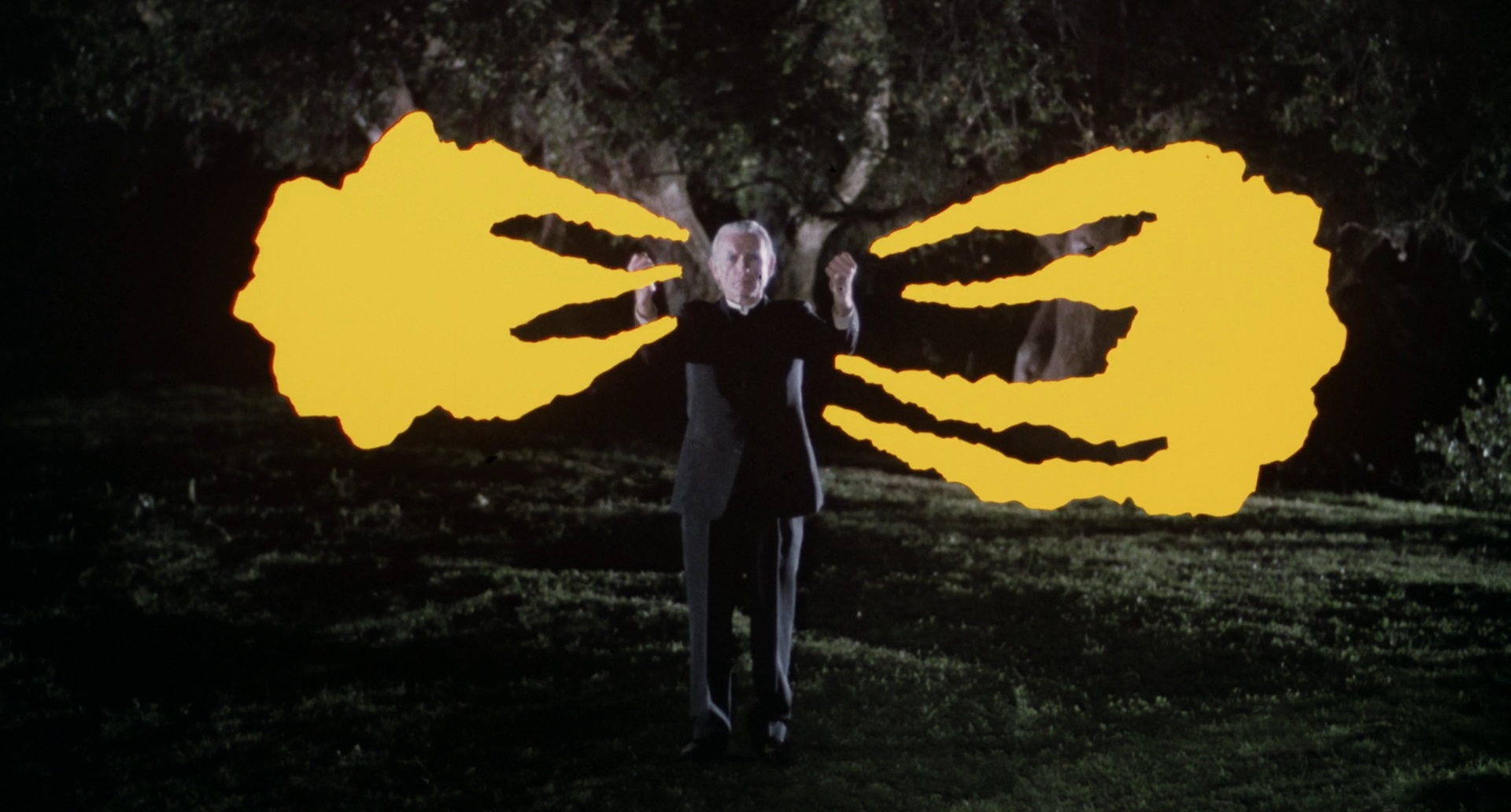 It’s not as if any of that matters, so let’s instead just talk about how jaw-droppingly WTF-ish Demon Wind can get.

Not too long after the gang shows up at the farmhouse, they’re tormented by some teleporting Village of the Damned old-timey kids with superhuman strength. Oh, plus they wield the power to mystically transform Flashdance-besweatered Bonnie into a bloodied baby doll that bursts into flames. 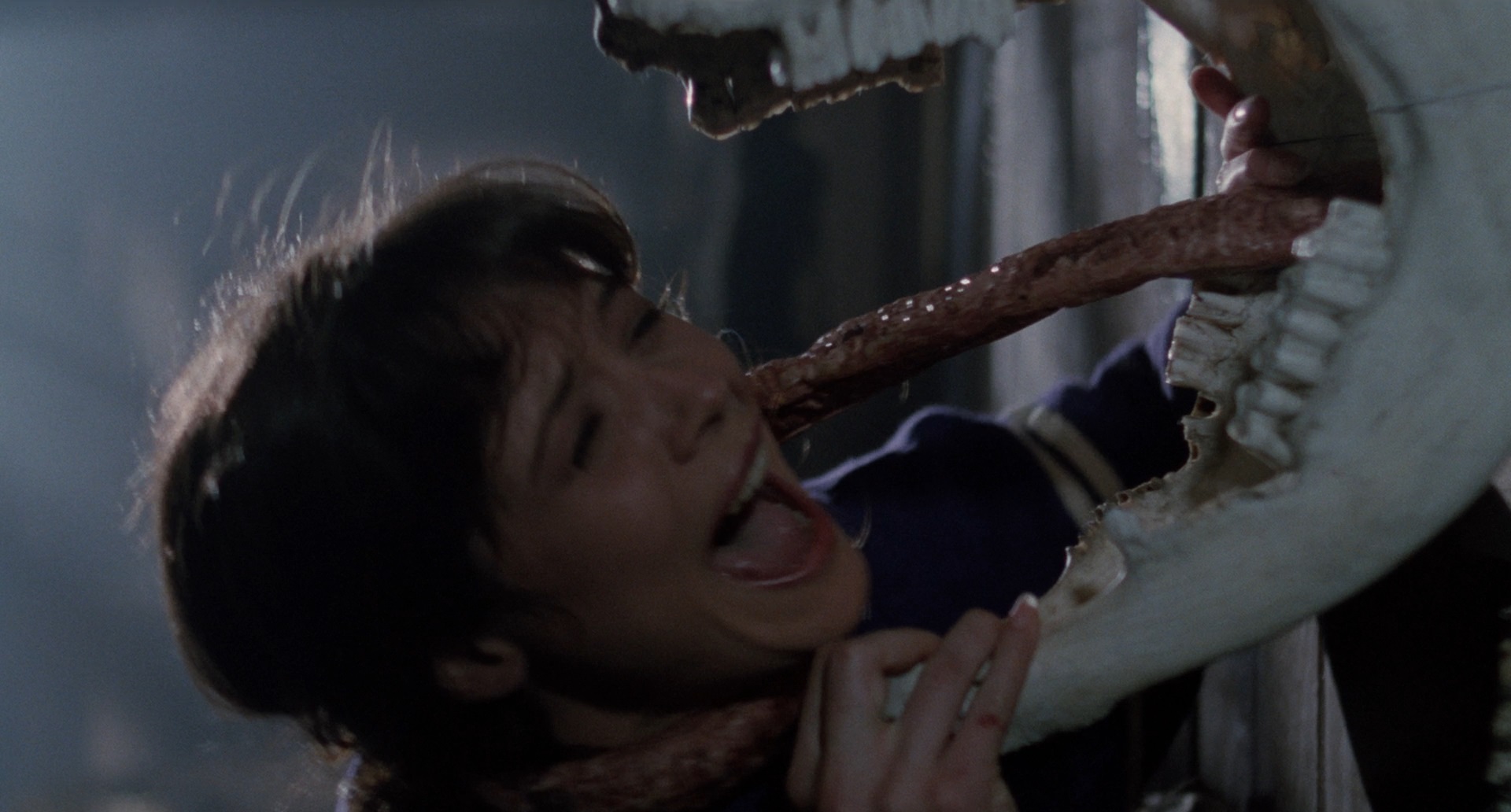 Later, the cow skull in a Satanic altar whips out its mammoth tongue, choking a new arrival and eventually chomping her to death.

The most brilliantly gleaming star in the flick is Chuck (Stephen Quadros), a magician ex-boyfriend (complete with cape) who rolls in on his buddy’s convertible and promptly unleashes an aluminum-can-kicking martial arts demonstration. I have pictorial evidence of part of that, anyway. 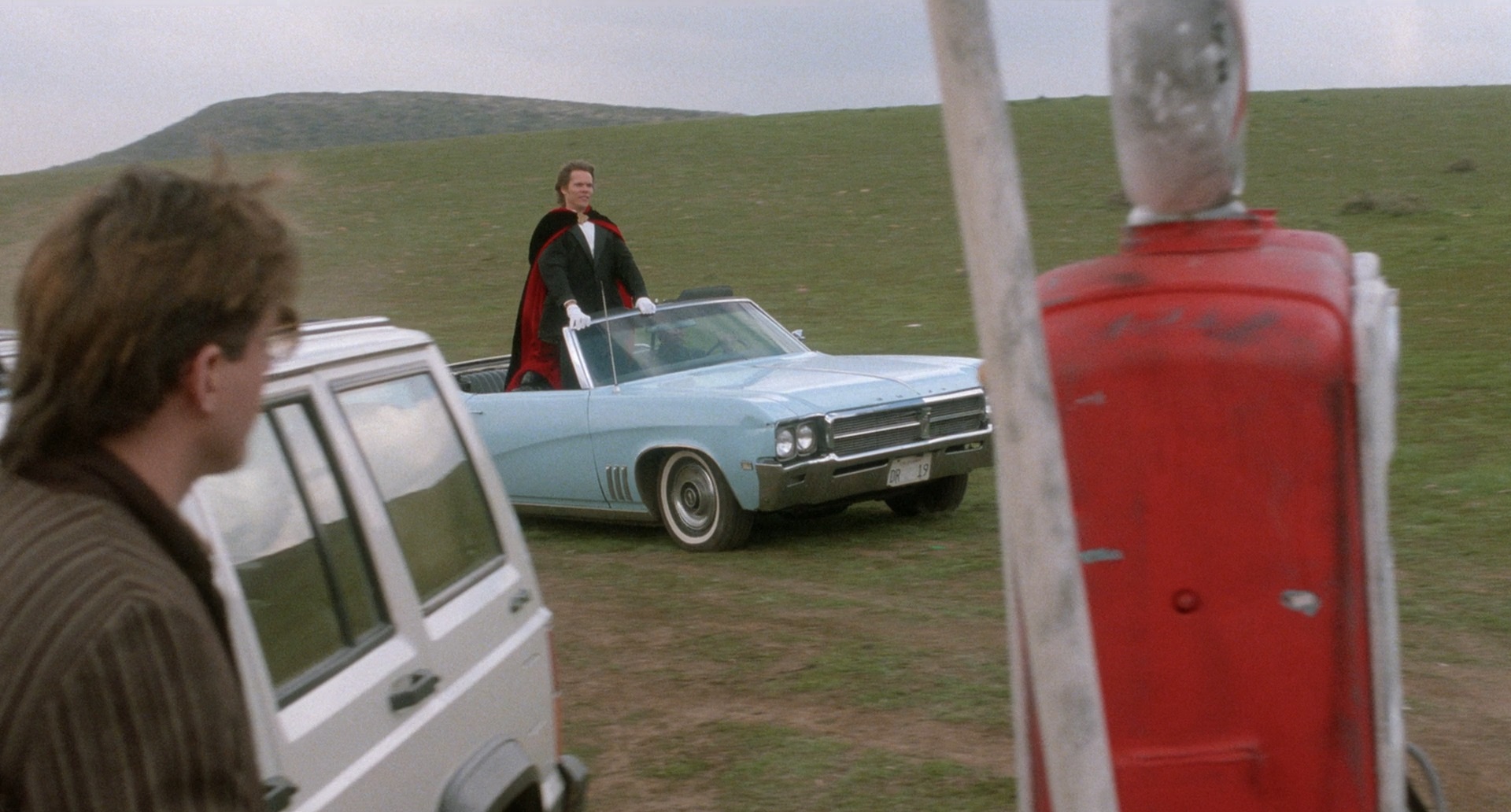 But why stop there? Here’s a quick exchange between Chuck and his sidekick Stacy:

“Will the puppets from Hell show tonight?”
“My son, if they do, we’ll just have to go out and kick some supernatural ass.”
“Charles, my man. I like your attitude. Very American, very… John Wayne.”
“Very what choice do we have?”
“It’s a good point. Man, I just wish we had some hand grenades or something.”
“I’d rather have a Tahitian vacation.”
“Not Tahiti!”
“Why not?”
“Voodoo, man. They do voodoo in Tahiti.”
“Eh, let’s say Chicago.”
“Vegas. We know nothing spiritual lives in Vegas.”
“Good point. Vegas it is.”

…and then a bare-breasted, middle-aged demon lady coos “Yoo-hoo!” and starts jiggling her stuff around outside.

Geez, I was so distracted by the awe and glory of Chuck that I didn’t even get to the part where this happens: 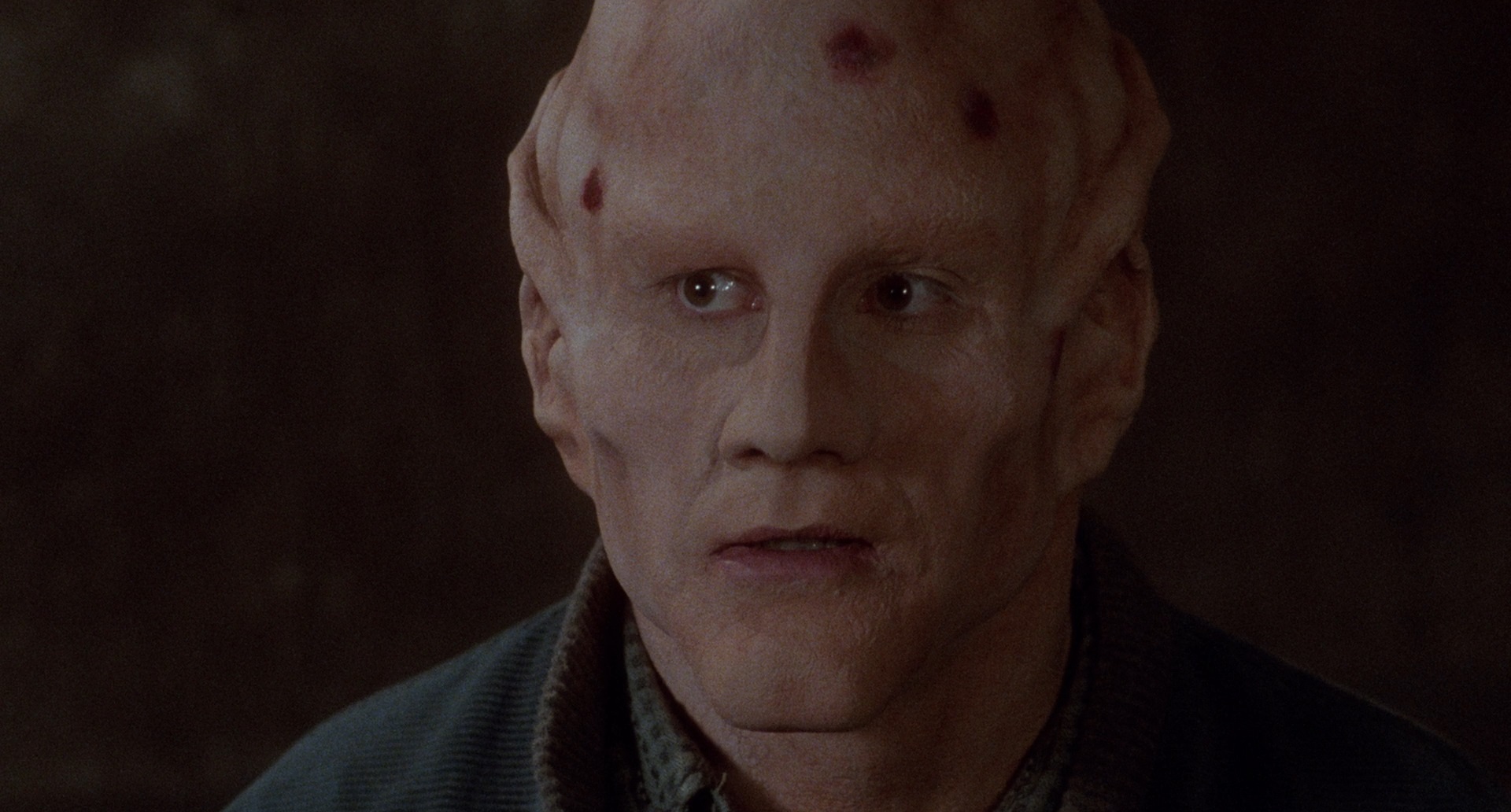 If this review seems rambling and self-indulgent to the point of incoherence, that’s just because we’re talking about Demon Wind here. I guess the charitable thing to say is that it has a dream-like narrative – bounding from one wildly imaginative set-piece to the next without much regard for logic. You probably won’t be startled to hear that the acting is no great shakes. The movie’s pace alternates between extended, mildly tedious setup and a screaming rollercoaster of I don’t even know what’s happening right now.

It can be excruciatingly predictable, thumbing through every page of The Big Book of Stock Genre Clichés. Then, at other times, a stabbed monster will transmogrify into a dove, an alpha-demon will get kicked in the balls, or Cory will look at his girlfriend’s exposed panties only to moan, “A moon for the misbegotten.” 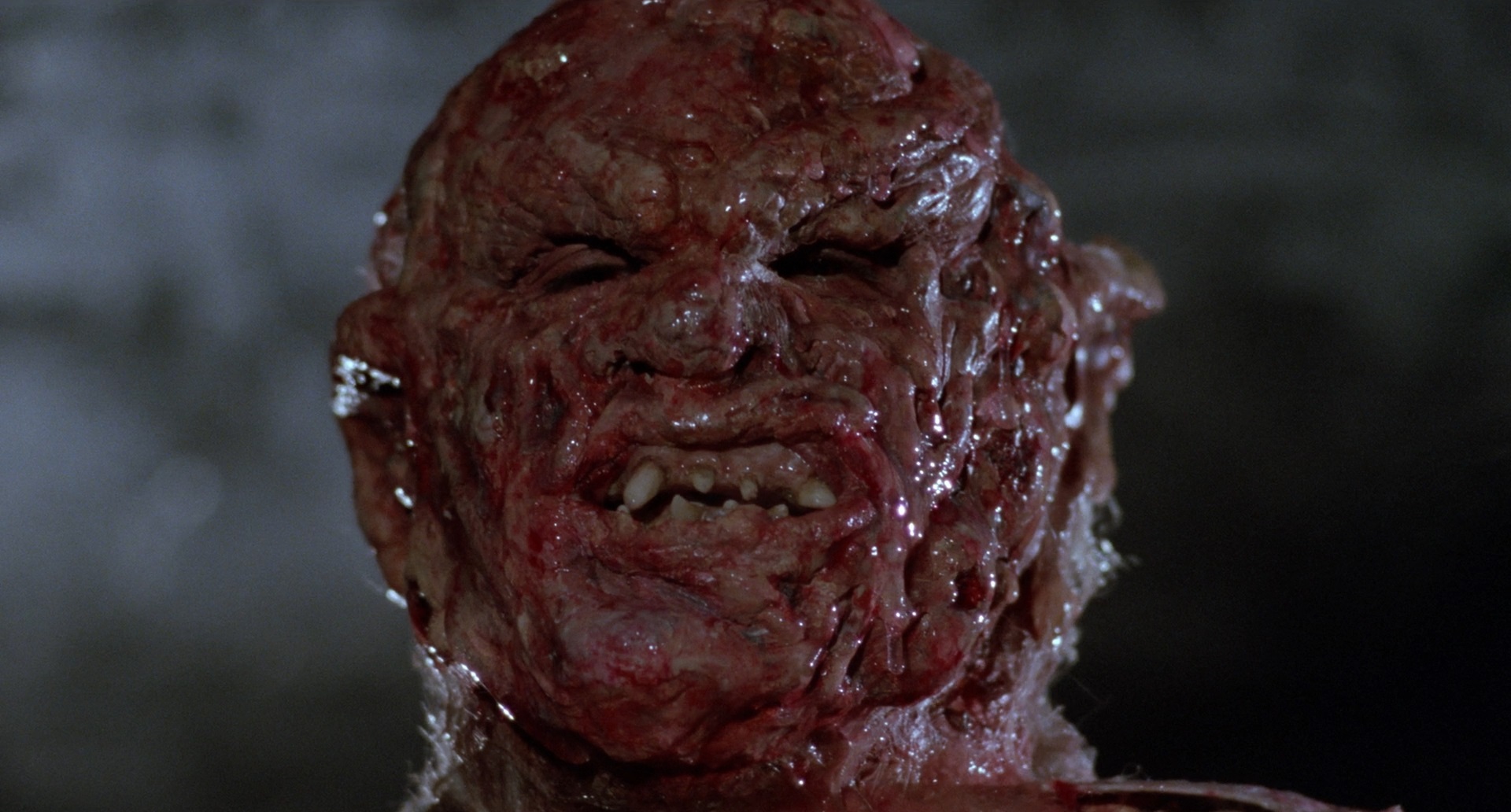 Demon Wind may not be good in the sense of… yeah, but that doesn’t stop it from being kind of amazing just the same. The tastiest slice of cheese this side of an upscale grocer, Demon Wind is currently streaming on Prime Video and Shudder. The same supernaturally gorgeous presentation is also available on Blu-ray, along with more than 80 minutes of interviews, courtesy of our pals at Vinegar Syndrome.