Wow! This newly-discovered cave drawing proves that ancient man once co-existed with dinosaurs. And, thanks to that meteor soaring through the sky right now, history’s about to repeat itself. 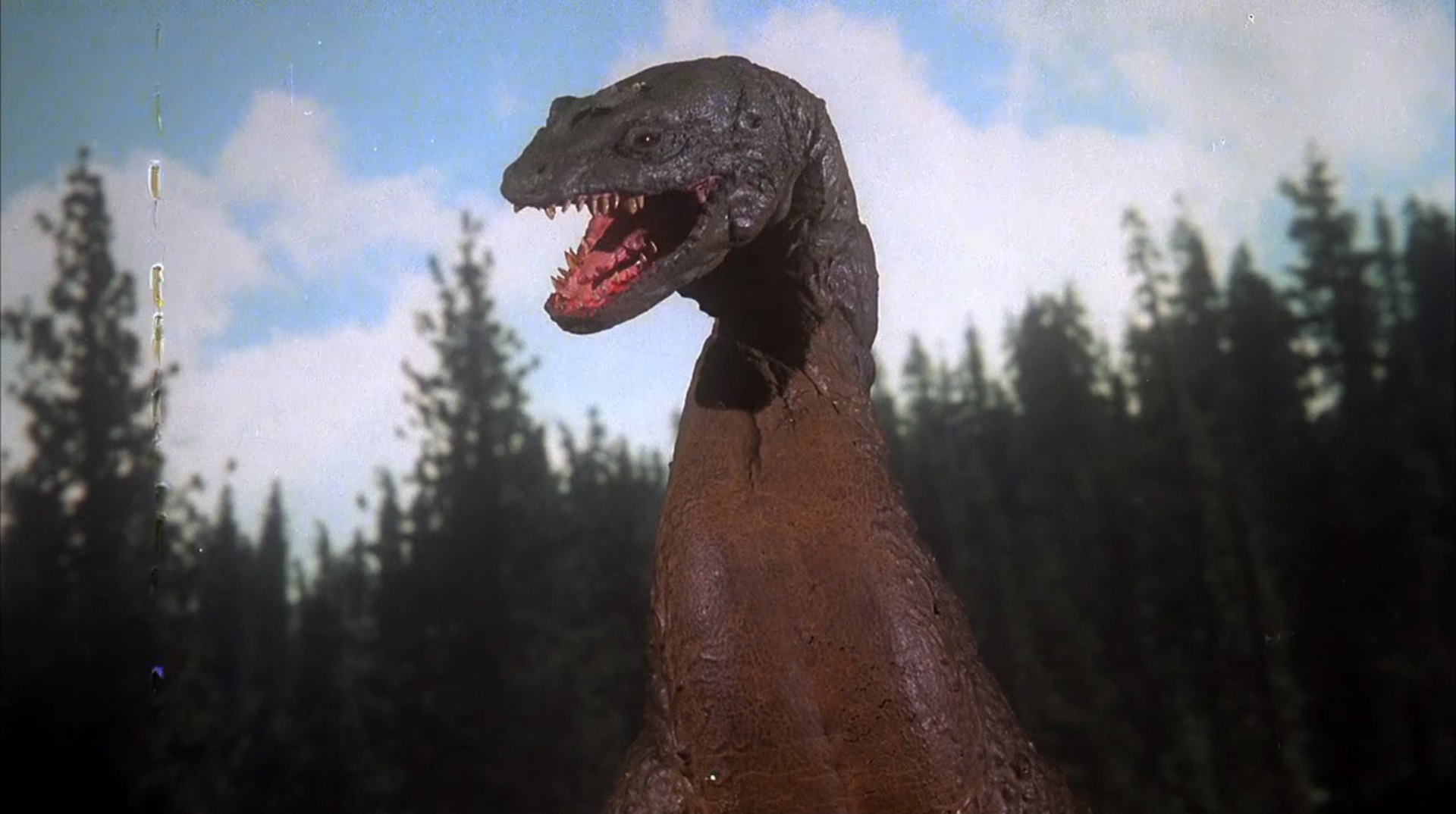 Okay, okay, plesiosaurs are ancient, aquatic reptiles and not technically dinosaurs. Still, when a colossal beast from tens of millions of years in the past is trying to sink its teeth into you, its proper genus and species aren’t really foremost in your mind. That’s the headache about Northern California all of a sudden hosting its very own Nessie. She’s long since devoured all the fish in Crater Lake (no, the other one). Just about all that’s left to eat around there is… well, us. 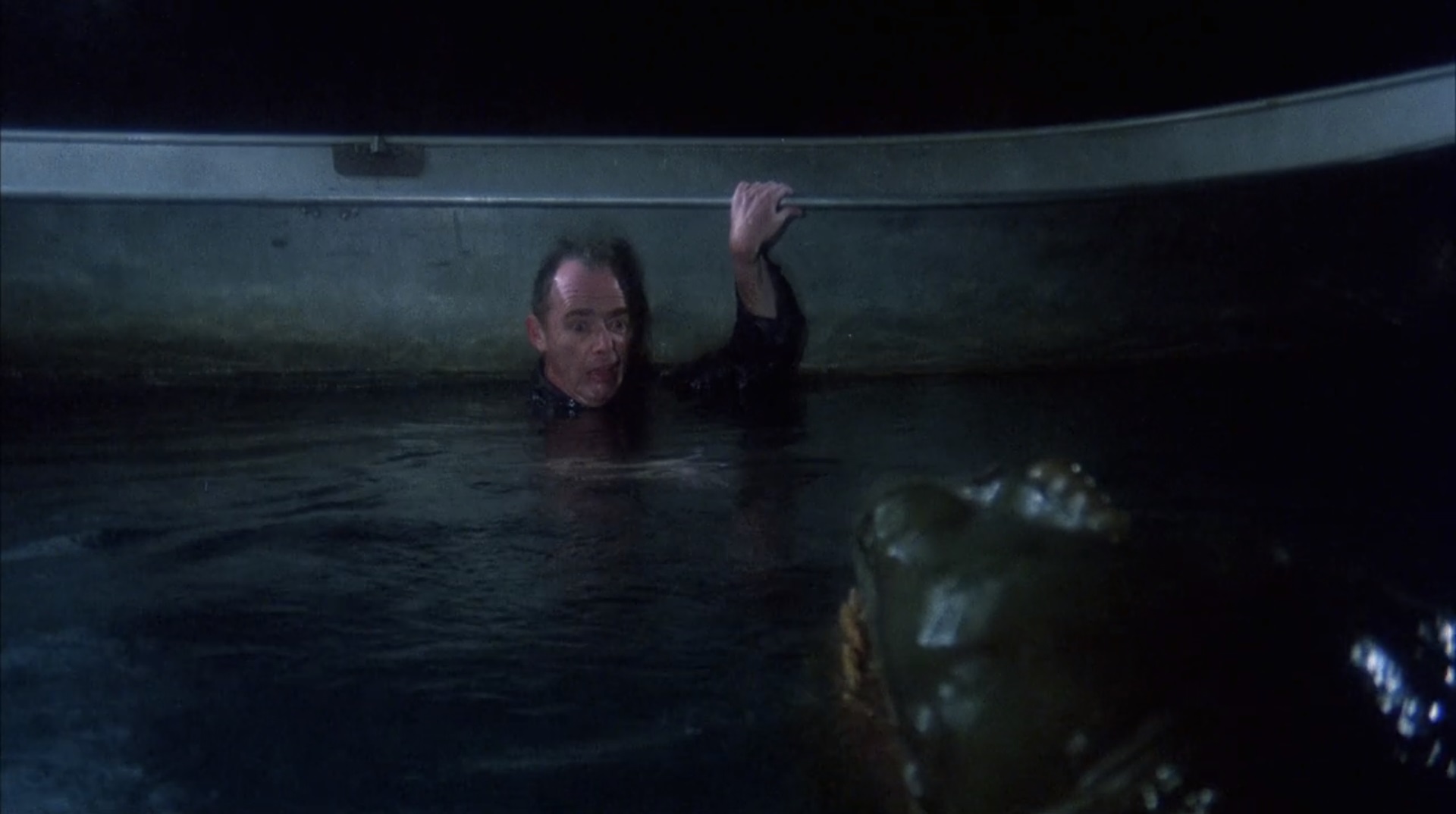 Far and away the best thing about The Crater Lake Monster is, of course, the creature itself. This plesiosaur was brought to life by the likes of Steve Neill (Ghostbusters), David Allen (Willow), Randall William Cook (the The Lord of the Rings trilogy), Jim Danforth (Clash of the Titans), and the legendary Phil Tippett (Star Wars). The stop motion animation is terrific, far outclassing what the drive-in crowd was typically able to deliver back in the 1970s. Those visual thrills are tempered somewhat by the use of a full-scale, mostly immobile, and generally ridiculous dino-head elsewhere, but at least the actors have something to interact with there.

It’s just that the creature only scores a few minutes of screen time in all, leaving more than 80 plesiosaur-less minutes to fill. Therein lay the tragedy of The Crater Lake Monster. 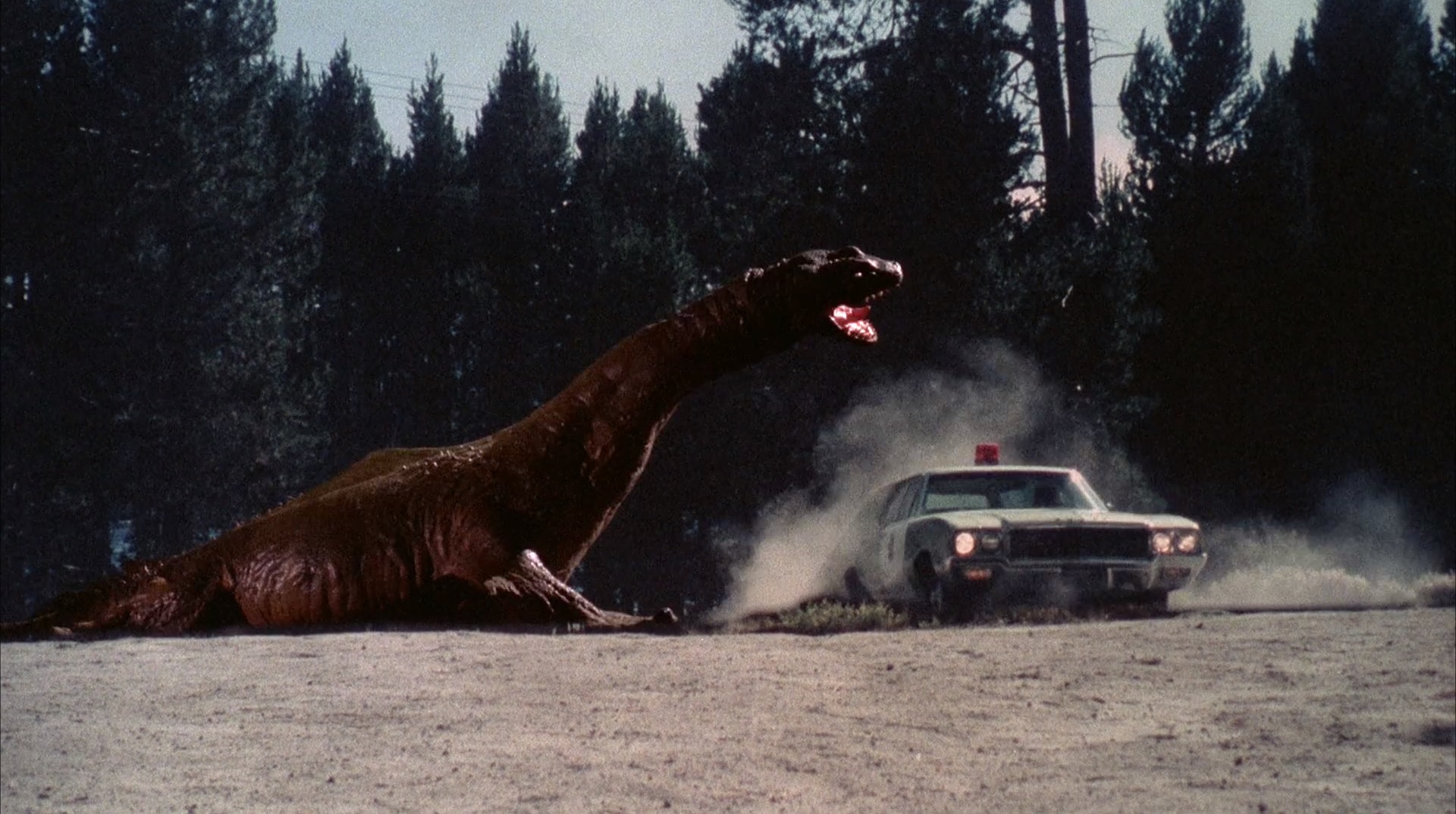 The story goes that once Crown International Pictures was brought in mid-production to help with financing, everything fell apart. Ambitious effects sequences were canned, leaving shockingly few dino-assaults and none of the havoc you’d expect from a giant monster flick. Even some completed animation was somehow lost during post-production, resulting in a lackluster, anticlimactic finale. Crown was so tight with the checkbook that there’s not a dissolve or fade anywhere throughout the film. They didn’t even bother to tint shots that were meant to be day-for-night. This is why you have a couple of awestruck Vegas cast-offs shouting “Look at the stars!” in broad daylight, as well as an early kill that cuts back and forth between the dead of night and the late afternoon sun. The wall of a swimming pool is even visible in one underwater sequence.

The Crater Lake Monster is peppered with the sorts of archetypes you’d expect: the small-town sheriff in way over his head, the town doctor, and a couple of scientists in love. They all wind up being about as consequential as the barrage of redshirts doomed to be devoured a couple minutes after being introduced. No, the real stars of the movie are a couple of lazy, conniving hillbillies with a floundering boat rental business. Marvel as they bicker like an old married couple at Olive Garden, try desperately to cheat what few customers they have, and wrestle for what seems like forty-five minutes straight. If you understandably miss that Mitch and Arnie are intended to pass for comic relief, the finger-wagglingly wacky score and cartoon library sound effects will help remind you. 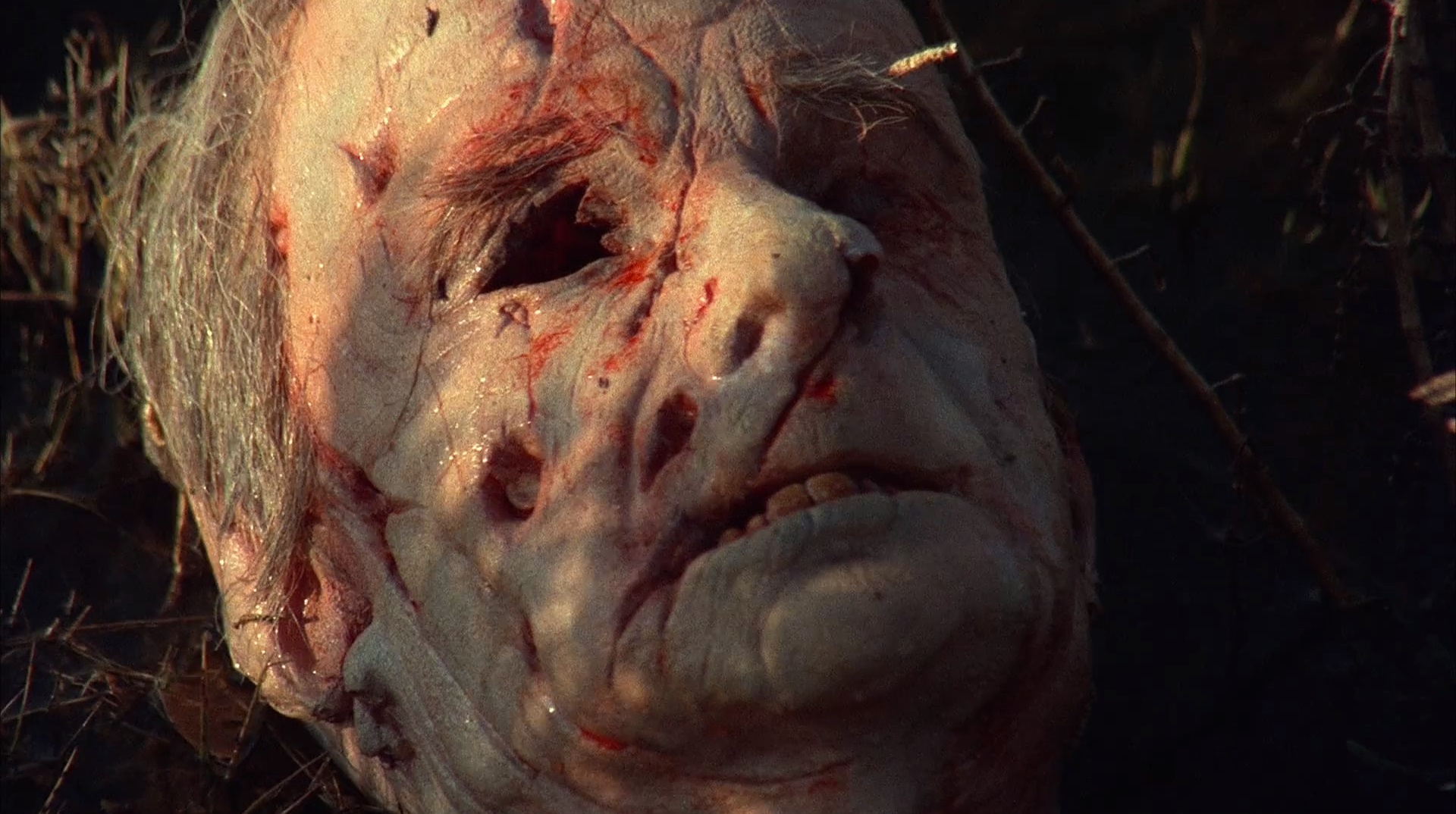 The effects shots are bridged with a whole lot of nothing, leaving The Crater Lake Monster as the single most excruciatingly dull movie I’ve written about in this column. Internal logic isn’t too much of a thing here, with the sheriff taking great pains to keep this all under wraps one minute – even keeping the FBI at bay from investigating the grisly death of a U.S. Senator! – and hosting a town hall about the plesiosaur the next. (Of course, “Don’t tell the state police/military brass/whomever about the dinosaur gobbling up our townsfolk!” thing is driven more by budget than common sense.) There’s a generally pointless subplot about a drunken loon who murders two people in cold blood to avoid shelling out for a bottle of hooch, yet he’s shown shortly afterwards paying for lunch at a nearby diner. What? Why? Even something as theoretically exciting as a car chase is sluggish and inept.

As much as I love its stop-motion animated plesiosaur, and as gorgeous as its cinematography of the lushly forested mountains and lake can be, The Crater Lake Monster is too miserable a slog to recommend. 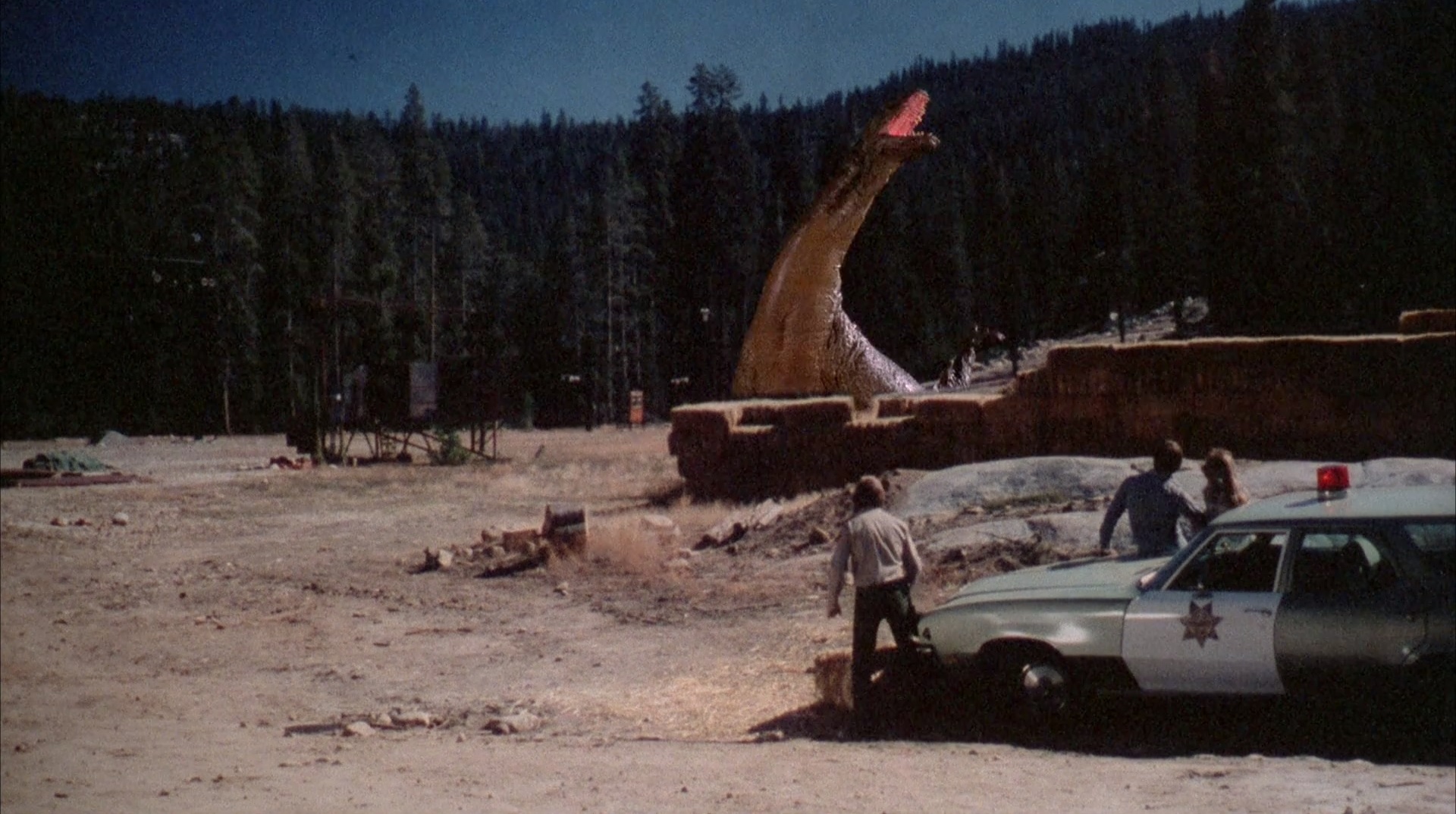