My sons have recently become obsessed with the story of the Titanic. Because they’re still a little young to watch the famous blockbuster about that disaster, which would be too long and too scary for a couple of 4-year-olds, I had the dubious idea of starting them off with Ghosts of the Abyss, James Cameron’s follow-up documentary about exploring the wreck of the ship. Results on that were mixed.

Ghosts of the Abyss

In the years after his Titanic became the highest-grossing movie of all time and put a couple of Oscars on his shelf, James Cameron couldn’t get the big ship out of his head. Rather than launch another major production right away, he instead spent a lot of time in the north Atlantic, skulking around the famous shipwreck. A deep-sea enthusiast for years, Cameron had visited the wreck himself in 1995, and used footage from that voyage in the bookend sections of his film. He returned to the boat on another expedition in 2001, this time filming in high-definition 3D for what would become the IMAX documentary Ghosts of the Abyss, released in 2003. Yes, the first theatrical feature James Cameron made after Titanic was another movie about the Titanic. I suppose we should be grateful it was a documentary and not a sequel.

Watching the movie today is a pretty melancholy experience for a couple of reasons. While Cameron tries not to dwell on this aspect of it, the documentary can’t help but serve as a reminder that over 1,000 people died in the original disaster. Moreover, the main person we see on screen for most of the running time is Cameron’s friend and Titanic star Bill Paxton, whose death last year still feels fresh. Cameron uses him as an audience surrogate, a layman observer who accompanies his pal Jim on the adventure, looking out the submarine window in awe of the spectacle in front of him and regularly asking dumb questions (almost certainly scripted) the scientists and researchers wouldn’t otherwise think to explain. Much footage of Paxton’s face is shot from an angle outside the tiny window looking in, which begs the question of what he was actually looking at. Logically, the only thing he’d be able to see was the camera itself, and probably not even that since it’s shining a light directly onto his face. I have to assume that these scenes were shot in a studio water tank many months after the voyage was over, making the “documentary” aspect of the film seem like a lot of bullshit.

A fundamental problem with the movie is that we already know most of what it has to say. The Titanic story is incredibly famous and was already covered in exhausting detail in Cameron’s own movie. Even the premise of showing us what the boat looks like today is flawed because, once we see it, the whole thing is covered in 90 years of barnacles and crud, and simply isn’t as visually interesting as it sounded on paper. The deeper the robotic submersibles penetrate into the wreck, the more crud covers everything and the less light is available, making it all the more difficult to tell what we’re looking at. Cameron must understand this, and he continually tries to distract viewers’ attention from it by cluttering the frame with picture-in-picture windows and staging gimmicky scenes where actors in costume are overlaid onto images of the destroyed ship as it looks now.

Make no mistake, Ghosts of the Abyss is not really a movie about the Titanic at all. It’s a movie about James Cameron, intrepid explorer, whose massive success making another movie about the Titanic allowed him to mount this expedition. Cameron inserts himself throughout the film, allowing us the privilege of watching him micro-manage research scientists that he assumes don’t know their own jobs nearly as well as he does. The director’s reputation as an anal-retentive jerk is well on display here.

The movie exists in two versions. The theatrical cut that played in IMAX theaters runs just over an hour. An extended 92-minute version was released later on DVD and eventually Blu-ray. For this viewing, my sons and I watched the short version. When I asked them, the boys said that they liked it, but they were clearly bored well before the end and both asked me repeatedly when it would be over. While the film doesn’t have any scary parts, I suspect that some of the talk about how many people died may have troubled them, even though we had discussed that beforehand.

I first caught Ghost of the Abyss when it was released on DVD in boring 2D. Despite not exactly loving the movie, I also spent a fair bit of coin to import a special 3D DVD from Japan. That disc was presented in a process called ColorCode, which was very similar to crappy red/blue anaglyph 3D except that the cardboard glasses had yellow and blue lenses. The 3D experience was only marginally better than anaglyph.

The Blu-ray edition released in 2012 is a three-disc set. One disc has the short theatrical cut of the movie in frame-sequential 3D, another has both cuts in 2D, and the final disc is a DVD copy. We watched in 3D, and this was the first time my boys had ever seen a 3D movie. I’m honestly not sure whether they were impressed with it or not. When I prodded them about it, they acknowledged a couple times seeing things come out of the screen, but they both seemed pretty blasé about the experience.

I should note here that my 3D projector is currently out of service and we had to watch on a smaller 3D TV instead. That said, for my part, I was grateful to see the movie in full-color 3D. However, the image routinely suffered ghosting artifacts on the right side of the screen. Anyone who tells you that passive 3D displays don’t have ghosting is mistaken, but the problem in this case may have had something to do with my viewing angle.

James Cameron is a major advocate of 3D, and the movie in general has a very effective and natural sense of 3D depth. Scenes above water are bright and colorful and have some fun pop-out effects. Once the cameras go underwater, unfortunately, the darker image offers fewer opportunities for good 3D. Because I was watching with kids, I didn’t turn the DTS-HD Master Audio 5.1 soundtrack up too loud, which is probably a good thing because even at a lower volume it seemed obnoxiously bass-heavy.

Supplements are limited to a half-hour making-of piece (a documentary about a documentary) and a pointless gag video. Missing from the DVD is an interactive feature that allowed you to toggle between multiple camera angles from the submersibles exploring the shipwreck. 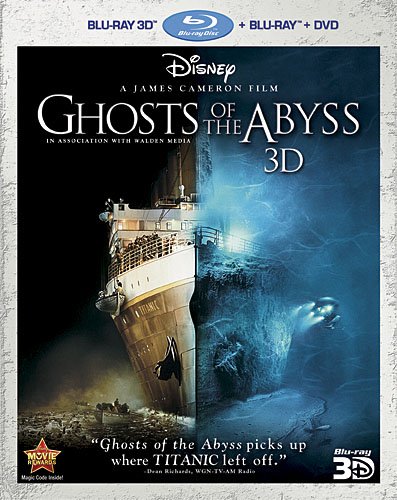 Ghosts of the Abyss – Buy on Amazon