Earlier this week, I had a chance to hop aboard Nintendo’s Mario-themed Airstream trailer to check out the exciting fall lineup including games like ‘Donkey Kong Country Returns’ and ‘Kirby’s Epic Yarn’. Needless to say, it was awesome.

I can’t exaggerate how nice it is to see Nintendo back in tip-top shape. Sure, the company has been making money hand over fist, but its game releases have been sub-par for quite some time now. This fall is different, and includes a huge list of titles that the hardcore crowd has been begging for.

I got to test hands-on with a few of these games, and I couldn’t be happier with the way they play. I’m so impressed, in fact, that I’m actually going to purchase a Wii – something I’ve been putting off since launch.

Sure it’s already been released, but the latest installment in the ‘Metroid’ franchise was first on the list. I played through the first ten or so minutes of the game up until the first boss fight. It’s slick, and plays like a Team Ninja game should.

I won’t get into it too much since it’s already out, but it was great playing a side scrolling style ‘Metroid’ game again. I had a bit of trouble with the transition between the traditional and first-person views – You have to do this to use your missiles, but it seems like something that will get easier as the game goes on.

This DS-based puzzle game was next up, and I just can’t help but love it. You won’t find any drastic changes from the first two titles, but that’s probably a good thing. The puzzles I went through were challenging, but not to the point of frustration.

The thing that makes ‘Professor Layton’ so great, I’ve always thought, is what surrounds the puzzles. Any game can do puzzles, but few can do it with such charm. The music is fantastic and the visual presentation is exceptional.

When I watched Nintendo’s E3 press conference, I expected absolutely nothing out of the company other than the 3DS. In the last few years, it’s revealed little of interest to me, and I just assumed more of the same. This year was different, though. So different, in fact, that High-Def Digest’s Dick Ward (hey, that’s me!) remarked, “Nintendo kicked ass this year. Everyone’s ass. All over E3.” 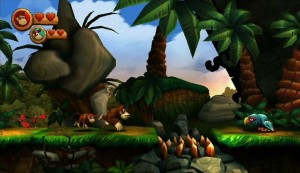 The most exciting game from that press conference for me was ‘Donkey Kong Country Returns,’ a side-scrolling platformer that thankfully ignores everything that came after the initial ‘Donkey Kong Country.’ Now that I’ve played it, I’ve gone from excited to some other state of being where humans become pure energy.

All right, maybe I haven’t gone that far. But from what I’ve played, this game is exactly what I wanted it to be. It looks, sounds and plays like a higher resolution version of the original. You get the same swinging music, plenty of barrel rides, and more collectables than ever – if you’re into that kind of thing.

I played cooperatively with one of the reps from Nintendo. (Since I’m terrible with names, I can’t properly give her a shout out.) She handled Diddy Kong while I took on the role of Donkey Kong. We smashed our way through a level, and the game took me right back to when I was 12.

The one thing that might be a letdown for those looking for that old school experience is that you’ll have to use the Wiimote and Nunchuck. When you ground pound as Donkey Kong or blow flowers (yes, you can blow flowers – no, I’m not joking) as either character, you’ll need to shake your hands up and down. The small bit of motion control integration doesn’t take away from the game at all, though I can’t say whether it enhances it or not.

My time with ‘Donkey Kong Country Returns’ was enough to finally get me to pick up a Wii. Congratulations, Nintendo.

It’s been a long while since I’ve been interested in a ‘Kirby’ game. The first few were interesting, and I have to admit a fondness for the golfing game ‘Kirby’s Dream Course,’ but that was back in 1995. Since ‘Kirby’s Dream Land 3,’ the character and games have done absolutely nothing for me. ‘Epic Yarn’ may change that.

I went through the first level of this game cooperatively – I love that co-op play is becoming a standard feature – and had a blast. It’s lighthearted and whimsical, and it just plain works. 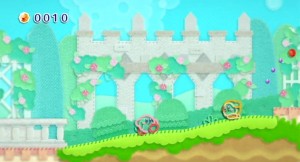 The look of ‘Epic Yarn’ is completely different from anything you’ve played before. The protagonist, Kirby, is made up of a bit of yarn, and the world around him is made of fabric, zippers and string. This may sound a bit like ‘Little Big Planet,’ but the aesthetic is decidedly different. If you haven’t checked out the trailer, do so now.

It takes a minute or two to get used to the idea of a mostly see-through hero, but once you’re used to the difference it works just fine. The game surprised me a few times with the different things I could do and the different shapes I took as I did them. Clearly, a lot of thought went into this game.

Controls are responsive, platforming is fun. I even discovered a few things you can do in cooperative play that you won’t be able to in single player, like throwing my partner up to collect items.

It’s a blast to play, but some folks might be put off by how gosh-darn cute it is. You might not want people to catch you playing this game on your own. But if the rest of the game plays as well and remains as clever as the intro, the embarrassment may be well worth it.

Sure, ‘Scribblenauts’ had its flaws, but it was still one of the most inventive games of the last few years. My friends and I got hooked on it, trying to come up with the craziest solutions to things and – more importantly – finally settle the argument of who would win in a fight between a vampire, Cthuhlu and a lumberjack. You can probably guess the outcome.

So what can you possibly add to a game that lets you summon up creatures from the depths of hell to help you collect a star from a tree? The guys at 5th Cell simply unpacked their adjectives.

I played through a few levels pretty quickly, summoning up objects like a blue axe, a large brachiosaurus and a small kitten. It was plenty of fun. With movement controls, switching to the D-pad it was a lot less frustrating to play.

I finished up with a game called ‘FlingSmash’ that’s exactly what it sounds like. You control a ball-like character who can be flung towards objects, which he promptly smashes.

The simplest way to think of ‘FlingSmash’ is as a sideways version of ‘Breakout‘ that scrolls through a level. You control the character like you’d control a tennis ball – by smashing the bejeezus out of it.

It’s not the deepest game you’ll find, and it’s not going to satisfy the most hardcore of gamers, but it’s plenty of fun and is being released at a price point of $39. Sure, it’s no ‘Donkey Kong Country Returns,’ but it might be a nice break in between levels.