I’ll just come right out and say it. Nintendo kicked ass this year. Everyone’s ass. All over E3.

Nintendo’s E3 press conference yesterday was absolutely brilliant. And it’s about time. The last three years have been dire for the once-great company. Sure, sales have been through the roof, but the core gaming audience has just walked away disappointed again and again, trying to make a meal out of scraps. One strong title a year is not enough. 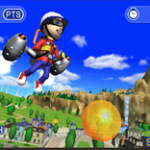 Now before cries of fanboyism get started, let me mention that I don’t actually own a Wii. I own a DS, but I use it mainly for ‘Personal Trainer: Cooking’ and the occasional bout of old ‘Final Fantasy’ titles. I’ll take the SNES over almost any other console, but that hardly enters into the situation. Then again, based on Nintendo’s game lineup, it just might.

The press conference started out with the announcement of a new ‘Zelda’ game, which looks interesting, and will almost certainly sell like crazy. It finally does the whole motion sensing thing in the most intuitive way possible. The sword moves in the way you swing it. Normally, that would be it. One big announcement to make core gamers happy and then a bunch of stuff for mom and dad.

But not this year. It’s like Nintendo finally woke up and said, “Hey, let’s make our biggest fans happy.”

So we get ‘Donkey Kong Country Returns,’ which is a 2-D platformer in the style of the SNES ‘Donkey Kong Country.’ It looks amazing. It might be the reason (along with ‘New Super Mario Brothers’) that I finally shell out the cash for a Wii. It’s nice to see Nintendo going with its strengths.

Then the 3DS stole the show. It’s everything that we thought it would be and a bit more. The touch-sensitive bottom screen seems no different than usual, but the top screen adapts a wide aspect ratio, which should be a real benefit. There’s also a slider to adjust the depth of 3-D images from Off to Full. The key word here is depth. None of that popping out stuff – it’s all inward. At least for now.

The system wasn’t dated or priced. That will probably happen at the Tokyo Game Show. But we got to see a ton of games in development, and they weren’t just the kind of dreck that the DS launched with. There are revisits to classic titles like ‘PilotWings,’ ‘Mario Kart,’ ‘Star Fox 64,’ and even some exciting third party stuff.

And the game that’s been rumored for years now finally got announced. There’s a new ‘Kid Icarus’ on the way. Did I like the old ‘Kid Icarus’ game? No, I didn’t. But this is far different than the NES classic and I’m willing to embrace it.

Microsoft’s press event was geared much more to the family audience than usual, which let Nintendo come in and win the core audience back. It’s safe to say that Nintendo succeeded in getting people excited.