Let’s be honest, this summer has been abysmal. Like, a bottomless pit of suffering and strife. If Hollywood were Maximus, asking if we’re entertained, I think we would all jeer, “No!” Then probably add, “And put a shirt on, you jerk!” Thankfully, ‘Toy Story 3’ is here to rescue us. And guess what? You probably won’t see a more emotionally rich, visually extravagant film all year.

Getting into plot specifics would be pointless and ruin a lot of the fun. Just know that the gang of toys from Andy’s room (Woody, Buzz, Slinky, Jesse, the aliens, etc.) have found themselves at Sunnyside, a day care facility lorded over by a grandfatherly teddy bear named Lotso (Ned Beatty). It’s here that the gang meets a whole host of new toys. There’s something like a dozen new characters. Among them are a fey Ken (Michael Keaton) and Stretch (Whoopi Goldberg), a sparkly purple octopus. Andy’s about to leave for college, and the toys want to get back to their child, or at least to his attic. Especially so considering the rough-and-tumble way the kids at Sunnyside treat them. But they can’t leave. Woody has been separated from the other toys. He’s in a little girl’s house with a small squad of scene-stealing toys, including Timothy Dalton as a thespian hedgehog. Woody plots to break them out, at which point the general shape of the film is revealed: it’s a heist/escape movie, for the most part.

This section of the movie is a whole lot of fun. You can tell that the guys and gals at Pixar were eating up the opportunity to jump back into the comedy formalism of the ‘Toy Story’ movies after the rugged experimentalism of ‘WALL*E‘ and ‘Up.’ The jokes come fast and furiously, with a considerable amount of edge and wit. Of particular comedic value is the relationship between Ken and Barbie (Jodi Benson). Maybe in an attempt to quiet the frequent talk that Pixar is a boys’ club that rarely delivers great female characters (which is a fair enough criticism), Barbie has been upped a few notches. She’s a strong and commanding character, while Ken is a clothes horse and wimp. The two together? Comedy gold. 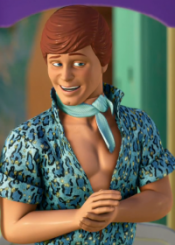 As much fun as the heist plot is, the emotionality of the piece comes together and the movie’s thematic weight presents itself in the last act. The first ‘Toy Story‘ was about maturing into adulthood, the second one was about growing old, and the third movie is about death. This isn’t me reading too much into it, either. It’s very obviously about moving on, about letting go. There’s some very powerful “hell” imagery towards the end of the film. It’s beautiful, powerful stuff. As soon as the third act started, I could hear the audience at my screening crying. That wasn’t just the stifled sniffles of polite movie critics; the screening had a bunch of “real world” people too. And they were letting out deep, cleansing, guttural sobs. (My manliness prevented me from crying, but I did tear up.) I realized afterwards that the audience’s reaction was as much about what was happening in the movie as it was about facing the prospect of living without these characters. After all, the first movie was released way back in 1995, the second entry came out in 1999, and in a lot of ways we’ve grown up with these characters. We don’t want to let them go either.

Thankfully, Pixar rises to the challenge and delivers a sequel that’s emotionally nuanced, really exciting, and incredibly funny. If you see a movie that’s more emotionally truthful all year, I’ll be very surprised.

I’m being very coy with details in this review, because I would hate to spoil any of the fun. The movie isn’t flawless. There’s some major problems with the villain’s motivations, for example. But it’s such a pure work, that comes from such a wonderful place, that you can’t really fault it for anything except making every other lousy summer movie look even worse.