Sometimes, even filmmakers can be wrong about their own movies. Usually in these cases, the creators have a higher opinion of their work than anyone else does. Steven Soderbergh’s 1995 heist thriller The Underneath, however, is a much better movie than its director would have you believe.

The Underneath is the movie that almost ended Steven Soderbergh’s career, for reasons entirely of his own doing. The film was a box office flop, yes, but many directors survive and come back from flops. Soderbergh had such a miserable time making the movie and was so displeased with the result that it left him depressed and disillusioned with filmmaking as a medium that he wished to explore any further.

Even to that point, you might expect to hear horror stories about studio interference or loss of creative control. But no, those weren’t the issue either. In fact, his bosses at Universal were so embroiled with production problems and budget overruns on Waterworld at the time that they mostly ignored the little $6 million thriller he was shooting in Texas and left the director to his own devices. According to Soderbergh, they weren’t even fazed or upset when it lost money. He also had a good cast, all delivering strong performances. To my knowledge, the shoot went smoothly without any significant obstacles. Quite simply, Steven Soderberg just decided halfway into it that he hated the movie he was making and, in his words, put himself on autopilot to get through it.

Soderbergh marked himself as a breakout talent right out of the gate with his debut feature, Sex, Lies, and Videotape, which caused a huge stir at Sundance and effectively kicked off the indie boom of the 1990s. Early success like that is often difficult to live up to, and he struggled with his next couple of pictures. Kafka was an ambitious dud. King of the Hill was warmly received by critics but little seen by anybody else.

In that early career, Soderbergh made a point of trying something different with each new movie. Sex, Lies was a probing psychological drama, Kafka was a surreal mystery, and King of the Hill was a nostalgic coming-of-age period piece. For his fourth feature, the director wanted to make a crime thriller infused with classic noir elements, heightened by a rigid formalist style and non-linear storytelling techniques. For source material, he chose the novel Criss Cross by Don Tracy, which had been made into a movie once before in 1949, featuring Burt Lancaster.

Peter Gallagher stars as Michael Chambers, a former gambling addict who burned a lot of bridges when he left his Texas hometown years earlier, but returns for his mother’s wedding and claims to have turned over a new leaf. Although he’s supposedly square with everyone he owed money to, his ex-girlfriend Rachel (Alison Elliott) still has hard feelings about the way he departed and isn’t happy to see him again. In trying to re-ingratiate himself with Rachel, Michael runs afoul of her new boyfriend, Tommy Dundee (William Fichtner), a shady club owner with a short temper and a strong jealous streak. Improvising quickly, Michael concocts a story about wanting to enlist Tommy himself in a job – a job job. After he got back to town, Michael conveniently lucked into a position at an armored car company, and can use his inside info to plan a robbery for upwards of a million dollars. Even if he doesn’t trust Michael, a score like that is too big for Tommy to resist.

The plot that follows has as many twists and turns and double-crosses as you’d expect from a neo-noir thriller. Soderbergh plays around with the genre by mixing up the chronology, repeatedly jumping around between flashbacks and flash-forwards. He also shoots the whole movie in highly stylized manner with heavy color filters, interesting compositions, and unusual devices such as split-focus diopters to disorient viewers. It’s entirely fair to call The Underneath an arty genre movie, though Soderbergh himself is more likely to use the word “pretentious.”

Somehow, the story never gets lost in all of this. In fact, the film has a smart plot, clever dialogue, and interesting characters. Gallagher is sympathetic as the conflicted hero, and Fichtner makes a terrific slimeball villain. Honestly, The Underneath is a great little clockwork thriller, even if the director is too close to the material and isn’t able to see it clearly through the cloud of his own feelings.

Of course, Steven Soderbergh would recover from the mid-life crisis he suffered on the set of this film. After The Underneath, he left Hollywood for a time to go off and make a bizarre, micro-budget surrealist comedy called Schizopolis, starring himself speaking nonsense dialogue that consisted mainly of random words strung together. Nobody saw it (until the much later Criterion DVD release), but the project was exactly what the filmmaker needed to re-energize himself and reaffirm his faith in making movies. He’d come back after that with some of his strongest work, including the more successful crime caper pictures Out of Sight and Ocean’s Eleven.

The Underneath was released on Blu-ray by the Criterion Collection in 2014 in a very stealthy manner. The film is technically available only as a bonus feature on the Criterion Blu-ray edition of Soderbergh’s King of the Hill, a fact you have to read the print on the back of the slipcover art to discover.

Criterion’s liner notes only discuss King of the Hill and make no mention of the video transfer for The Underneath, which leads me to assume that the master was provided by Universal and that Criterion had no hand in it. Because Universal has had a bumpy track record for catalog titles (especially those released around this time), this left me worried that we’d be stuck with a subpar, over-processed mess. Fortunately, that’s not the case at all. The 2.35:1 image is nicely sharp and detailed, with only rare occasions where a little DNR might be noticeable. (Some scenes are heavily grainy by design, and that hasn’t been changed at all.) Colors, which are such an important part of the film’s visual design, and strong and lovely. Contrasts are also very rich.

For some reason, the soundtrack is only provided in lossy Dolby Digital 5.1. That’s a disappointment, but the movie still sounds pretty decent. Dialogue is clear, fidelity is OK, and the score by Cliff Martinez has some moderate bass.

Most of the extras on the disc pertain to King of the Hill for obvious reasons. The only items relevant to The Underneath are a trailer in exceedingly crappy 4:3 pan-and-scan, and a 22-minute interview with Soderbergh from 2013. The director makes it abundantly clear that he absolutely hates the movie and doesn’t recommend it to anyone except for academic purposes. He considers it his “bottoming out.” Shockingly, he claims that only 22 prints of the film were ever struck, which is pretty astounding if true because I definitely saw one of them at the time. 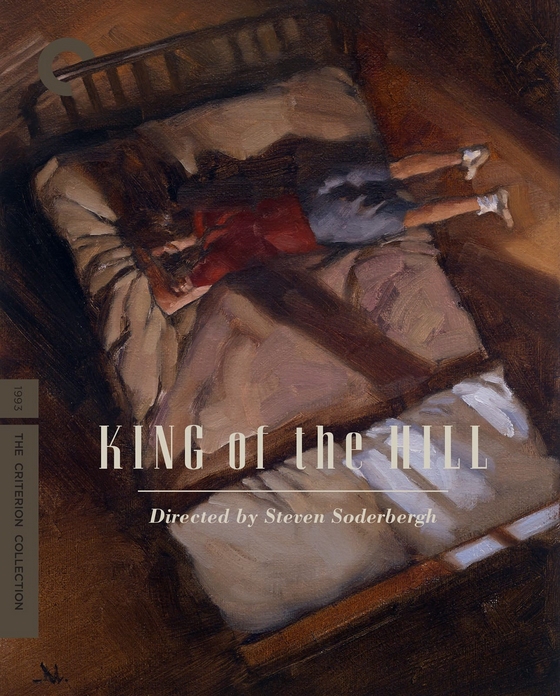 King of the Hill / The Underneath Blu-ray – Buy at Amazon