With its confusing and frankly meaningless title, cable TV origins, and mostly B-level stars, The Last Seduction largely flew under viewers’ radars back in 1994. Fortunately, the movie holds up remarkably well as a darkly comic neo-noir with one of the greatest femme fatale characters of its era.

Director John Dahl made some small waves on the art house scene in 1993 with Red Rock West, a noirish thriller starring Nicolas Cage and Dennis Hopper that got a number of good reviews from critics and played well at festivals. Sadly, the studio that bought it, PolyGram, had little faith in its marketability and sent it straight to HBO. Only afterwards did positive buzz lead to a limited theatrical run.

Similar issues plagued Dahl’s follow-up, The Last Seduction. The low-budget erotic thriller starred Linda Fiorentino, an actress who’d appeared in movies like Vision Quest and After Hours but was pretty far from a household name. Allegedly, production company ITV Entertainment financed the film with the intention that it be a direct-to-late-night-cable “Skinemax” flick, but Dahl had subversive intentions to make something that was actually good whether the studio wanted it or not. They clashed, and the director had to cut out some of his more artistic aspirations, but Dahl ultimately still delivered a movie far better than expected. Nevertheless, it wound up on HBO first before the studio grudgingly released it to theaters as well. 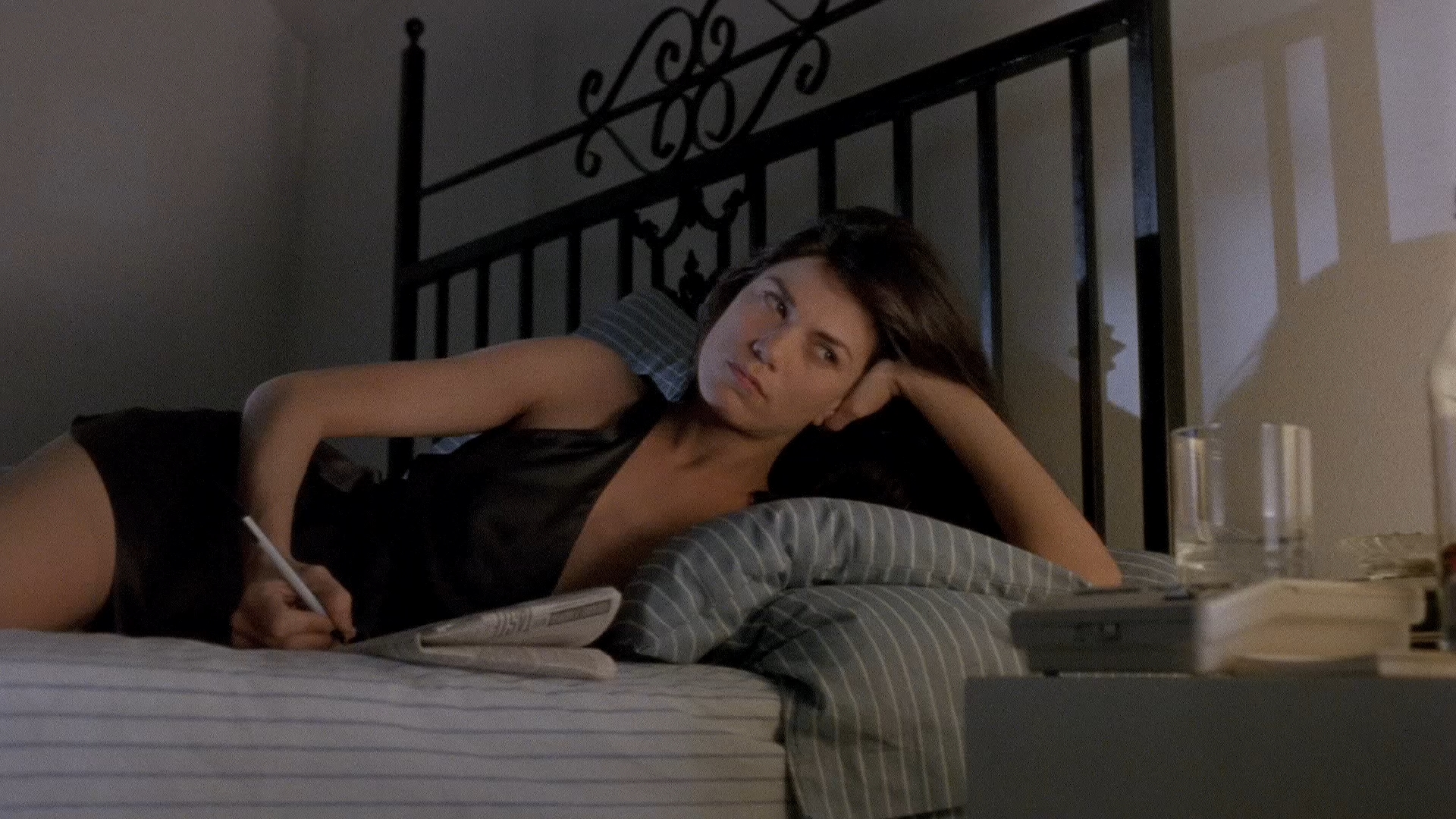 We first meet Bridget Gregory (Fiorentino) as the ball-busting floor boss of a telemarketing scam operation, and immediately know that this lady is no good. Her husband, Clay (Bill Pullman), is a doctor of some indeterminate type who steals pills to sell on the black market. He’s a dirtbag and a buffoon, with a temper he’s not very good at controlling. After he makes the mistake of smacking his wife, Bridget steals the entire cash haul from his latest sale and hightails it out of New York, leaving Clay with a looming loan shark debt he can’t pay and a hunger for revenge.

On her way to a new life in Chicago, Bridget gets stuck in the (fictional) small town of Beston, NY, and is advised by her dirty lawyer (J.T. Walsh) to stay put for a while. She assumes the new identity of Wendy Kroy, takes a job at an insurance firm, and pretends to settle into a life of boring domesticity that she loathes in a town she can’t wait to get out of.

A one-night stand with a local loser named Mike Swale (Peter Berg) results in an unwanted infatuation. As much as she makes it clear that she wants nothing more to do with him, Mike falls hard for Bridget/Wendy and pines for a real relationship with her – a concept she finds revolting. However, if he insists on doting on her like a puppy, Bridget might as well put Mike to some use. Soon enough, the lovesick dope finds himself the patsy in Bridget’s devious plan to give her husband a permanent divorce.

Unlike most traditional femme fatales, Bridget puts up no pretense of being a good girl or an innocent victim before revealing her dark side. She’s a stone-cold bitch from the first frame and makes no bones about letting everyone know it. Her contempt for her surroundings and everyone she meets can barely be contained. She’s also by far the smartest character in the movie, always ten steps ahead of everyone else. The Last Seduction is her film from beginning to end. She’s the hero, not the villain, and Linda Fiorentino is fantastic in the role. She owns this movie, exactly the right combination of cruel but sexy and appealing. We root for Bridget to succeed in her scheme and pull one over on everyone else.

Fiorentino is so good, in fact, that she was widely talked-up as a surefire nominee in the 1995 Oscar race. When the Academy of Motion Picture Arts and Sciences ruled her ineligible because the movie premiered on cable before it played in theaters, the producers (the same ones who sent it to cable because they thought it’d be a dog) attempted to sue, but were unsuccessful. Looking at the actual list of nominees that year finds no Best Actress performance even half as magnetic or memorable as Fiorentino’s. 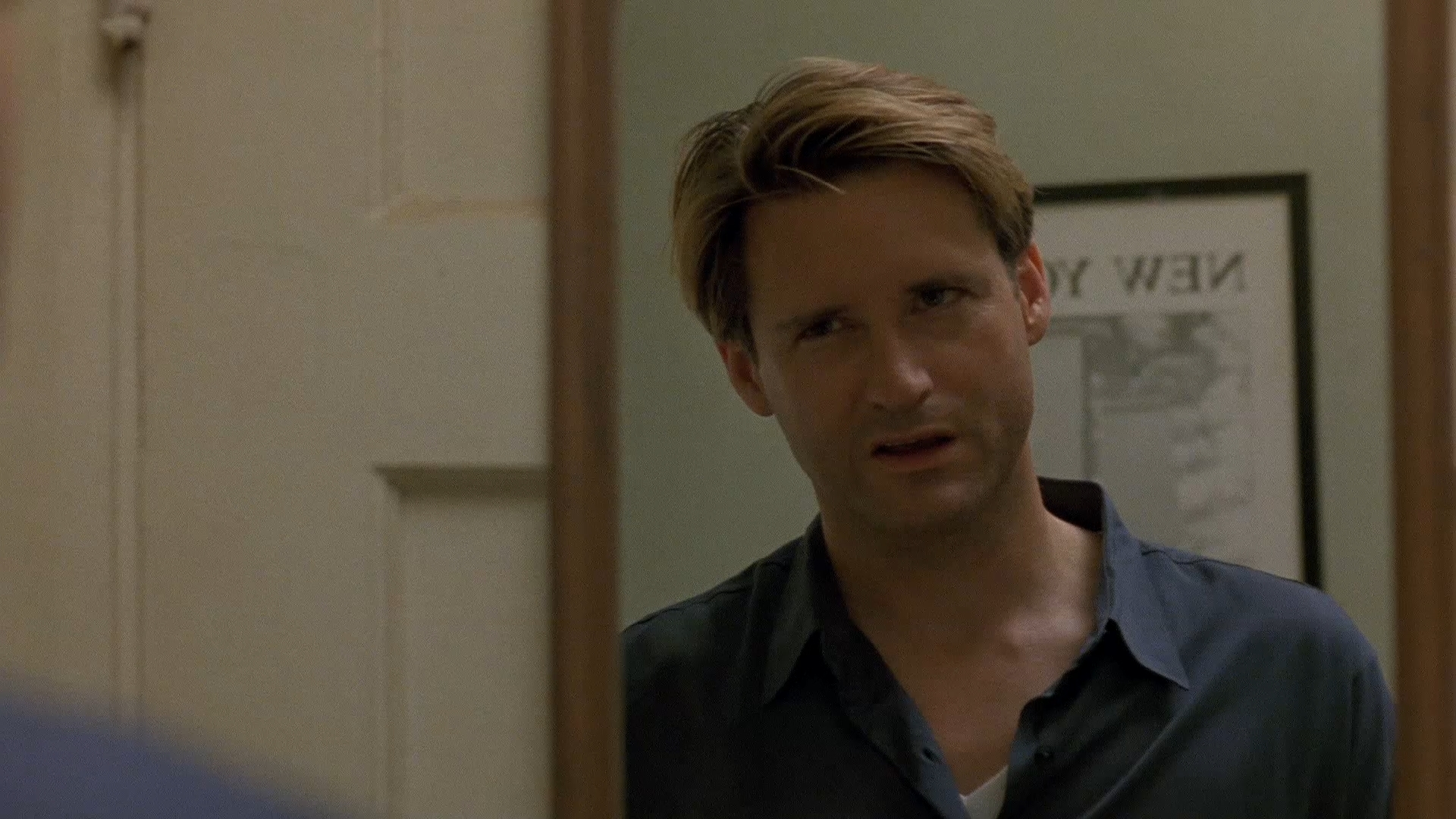 The Last Seduction has more up its sleeve than just one good character. Cleverly plotted, stylishly directed, and filled with sly humor, the film is just as much a delight today as it was 25 years ago.

The Last Seduction came to Blu-ray from Scorpion Releasing in November of last year. A small-print notation on the back of the cover art states “Master provided by ITV,” which I suppose is a way for the disc label to pass the buck for what amounts to a pretty lousy high-definition presentation. The open-matte 16:9 transfer is clearly very old, likely created for TV syndication in the late ’90s or early 2000s. The image is extremely dull and noisy, with weak detail and flat colors. Edge ringing artifacts even creep in during some scenes. To be blunt, it looks awful. Sadly, this may be the only chance The Last Seduction gets for a Blu-ray release. Without a remaster now, the odds of it getting one later (for streaming, I suppose) seem very slim. 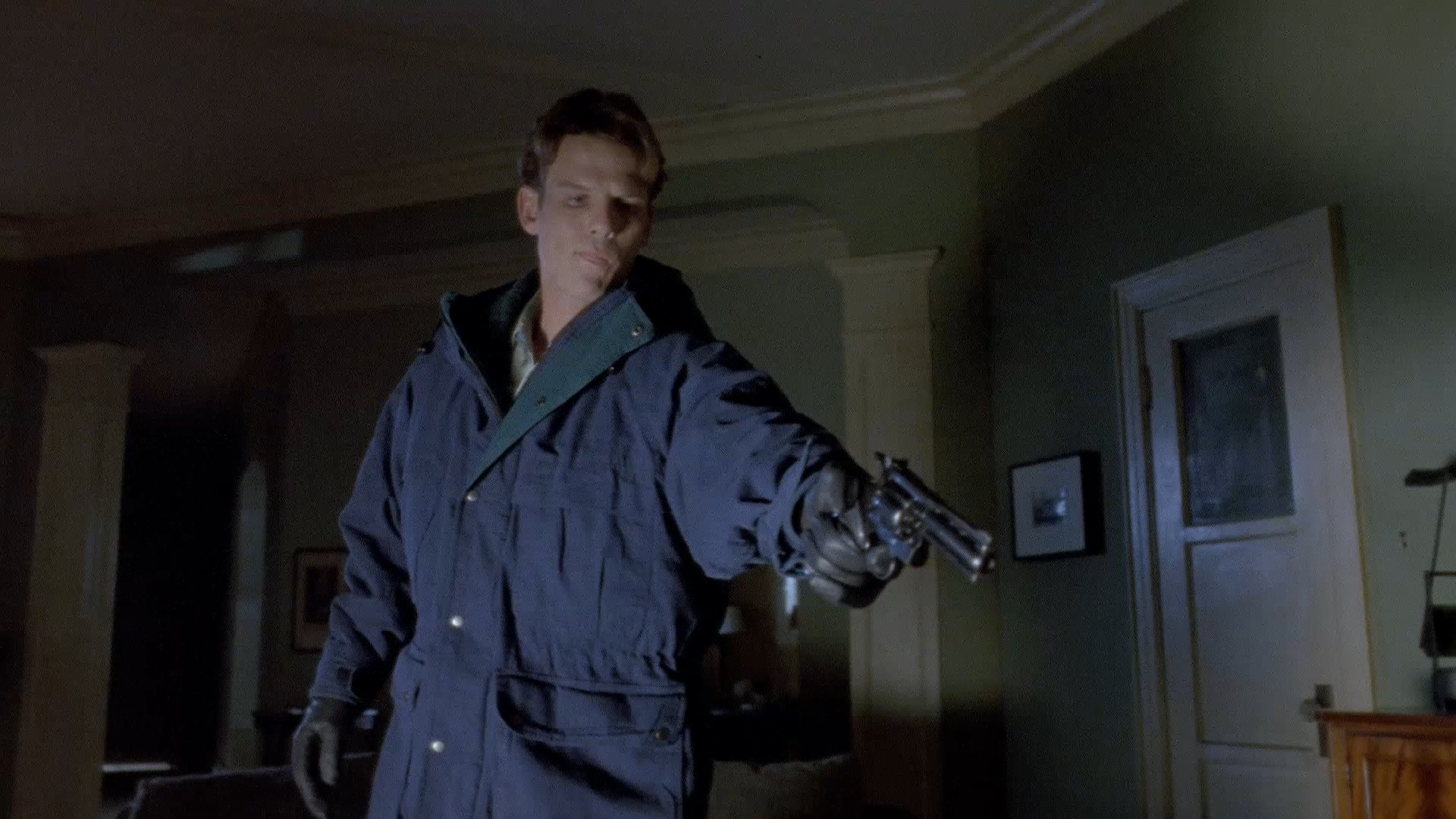 The audio is a little better, but just a little. Encoded in DTS-HD Master Audio 2.0 format, the soundtrack expands well with Dolby Surround Upmixer processing. The jazzy musical score by Joseph Vitarelli (HBO’s John Adams miniseries) is loud and spacious, with reasonable dynamics from a thrumming cello. Even here, however, the dialogue is frequently harsh and sometimes distorts.

A new audio commentary by director Dahl and film historian Nathaniel Thompson is the highlight of the disc’s bonus features. Other extras include a vintage featurette and behind-the-scenes footage, about 20 minutes of deleted scenes that take an hour to watch due to bookend footage from the finished movie around each, an alternate ending, an image gallery, and a trailer.

The Blu-ray may be underwhelming, but the movie is so good that I’m still grateful to have gotten the chance to rewatch it. 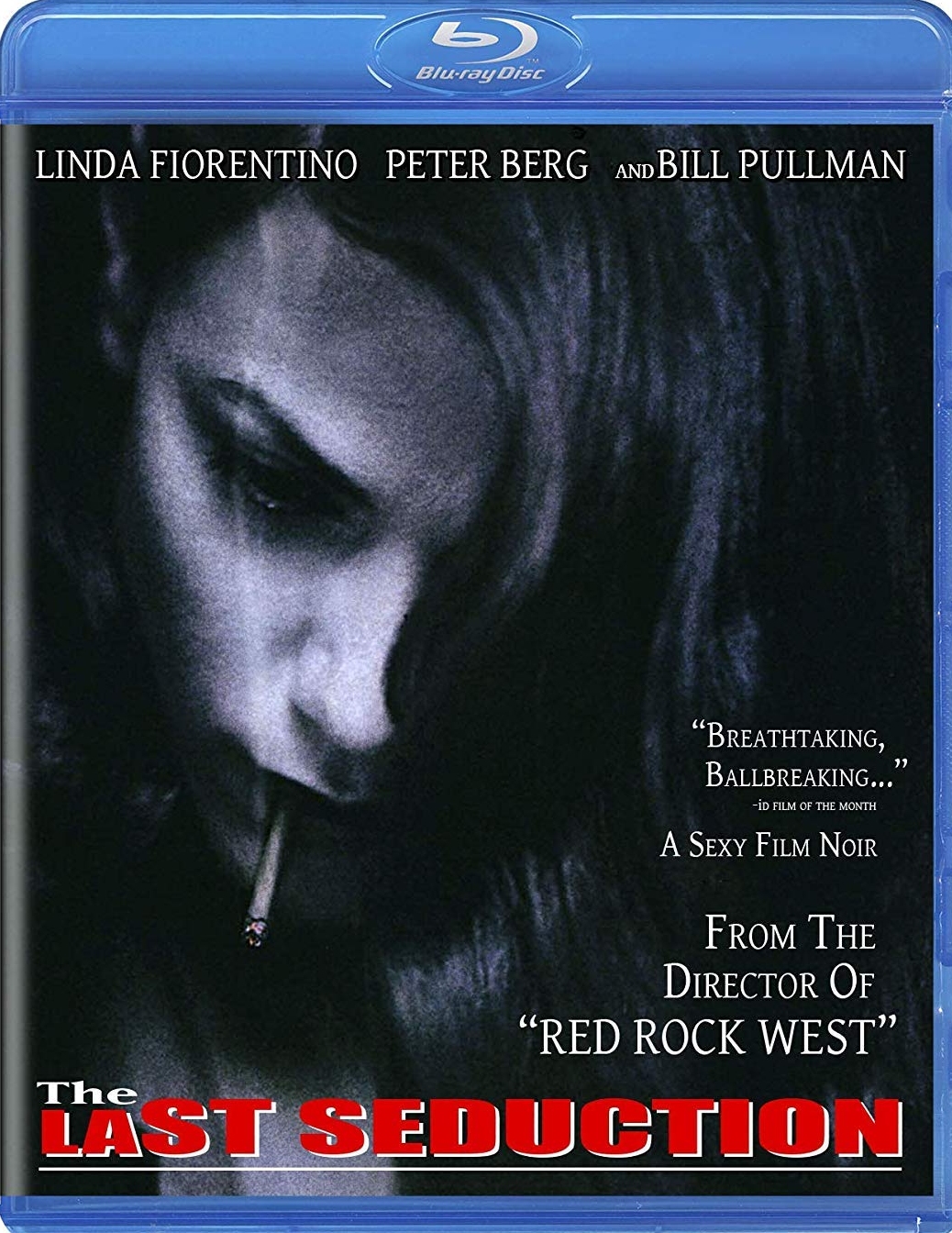