Ten years after emerging from the shadows and bringing top hats back into style, Hurrican’s classic board game ‘Mr. Jack’ has returned to the tabletop with an all-new look. Come now, Watson… the game is afoot!

1898 – Whitechapel, London
The night is covering its alleyways with a dark cloak, leaving only a few areas lit by the gaslights. Eight investigators have come together to track down Mr. Jack, still at large. Mr. Jack is very clever, though: he is pretending to be one of them…

If you’ve never heard of ‘Mr. Jack’, it’s a two-player deduction game designed by Bruno Cathala and Ludovic Maublanc first published in 2006. (Cathala also co-designed the game ‘Raptor’ I just reviewed recently). In ‘Mr. Jack’, one player takes the role of the infamous Jack the Ripper – who’s disguised as one of eight investigators hot on his trail. The other player portrays the detective who must catch and unmask the criminal before he flees into the night forever!

‘Mr. Jack’ includes a nicely illustrated game board depicting the dark alleyways of the Whitechapel district, 9 colored wooden discs (with matching stickers) used for character and turn-countdown pawns, 6 Gaslight tokens, 2 Manhole Cover tokens, 2 Police Cordon tokens, 1 double-sided Witness card, 8 Character cards (green backs), and 8 Alibi cards (red backs). It’s hard to make out in the image shown below, but the cards are actually super thick cardboard tiles and have quite a bit of weight to them. There aren’t a ton of components to ‘Mr. Jack’, but what’s included in the box is definitely quality stuff. 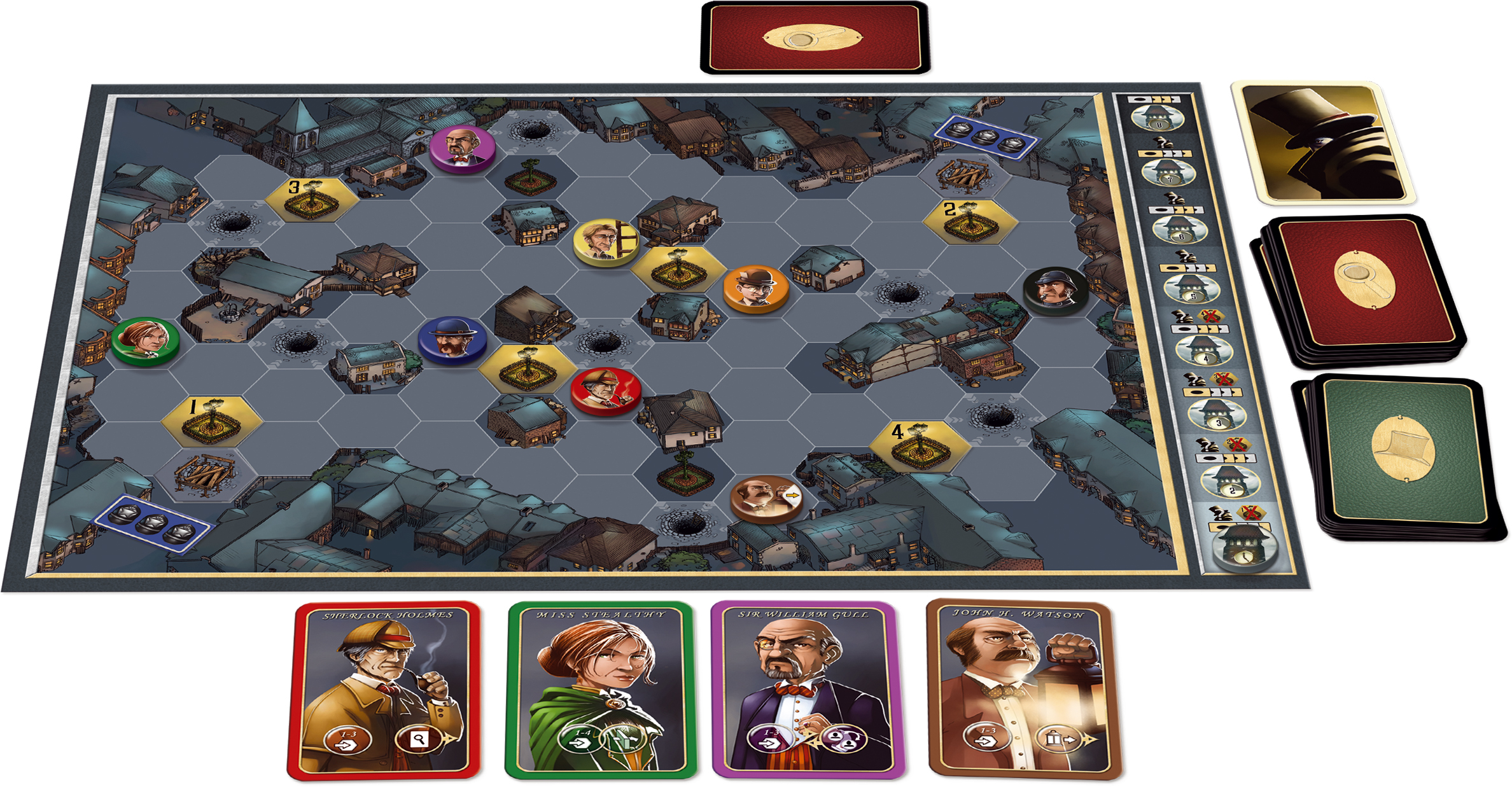 Every game of ‘Mr. Jack’ begins with the same pre-determined setup found on an oversized foldout diagram in the rulebook. The board is divided into hexes of terrain that sometimes can impact movement. There are four exit points (one in each corner), and on the right side there’s a tracker to indicate the current game round. Once all the various tokens are placed on their indicated starting spaces, the player who is Jack then draws one Alibi card and keeps it secret face down in front of him (or her). This Alibi card identifies which of the eight characters Jack is impersonating and will change from game to game. The detective has to identify and arrest this person before time runs out.

On the first turn (and all subsequent odd-numbered turns) four random Character cards are revealed and players take turns activating these characters with the detective player choosing first. Jack then chooses two, and then the detective activates the last of the four. Then, on every even-numbered turn, the four characters that weren’t flipped over on the previous round are used, except the choosing order is reversed (i.e. with Jack getting first choice). As soon as four characters have activated, the round ends with Jack using his/her Witness card to tell the detective player whether Jack is visible or not. Characters are considered visible if they’re in a lit area (such as being next to working gaslights) or are adjacent to another character. Otherwise, they’re treated as invisible. This is how the detective is able to rule out suspects, because if Jack is visible then every character that isn’t also visible is obviously innocent (and vice versa). Eliminated suspects are then turned to their “innocent” side, which helps the detective zero in on his target in later rounds. 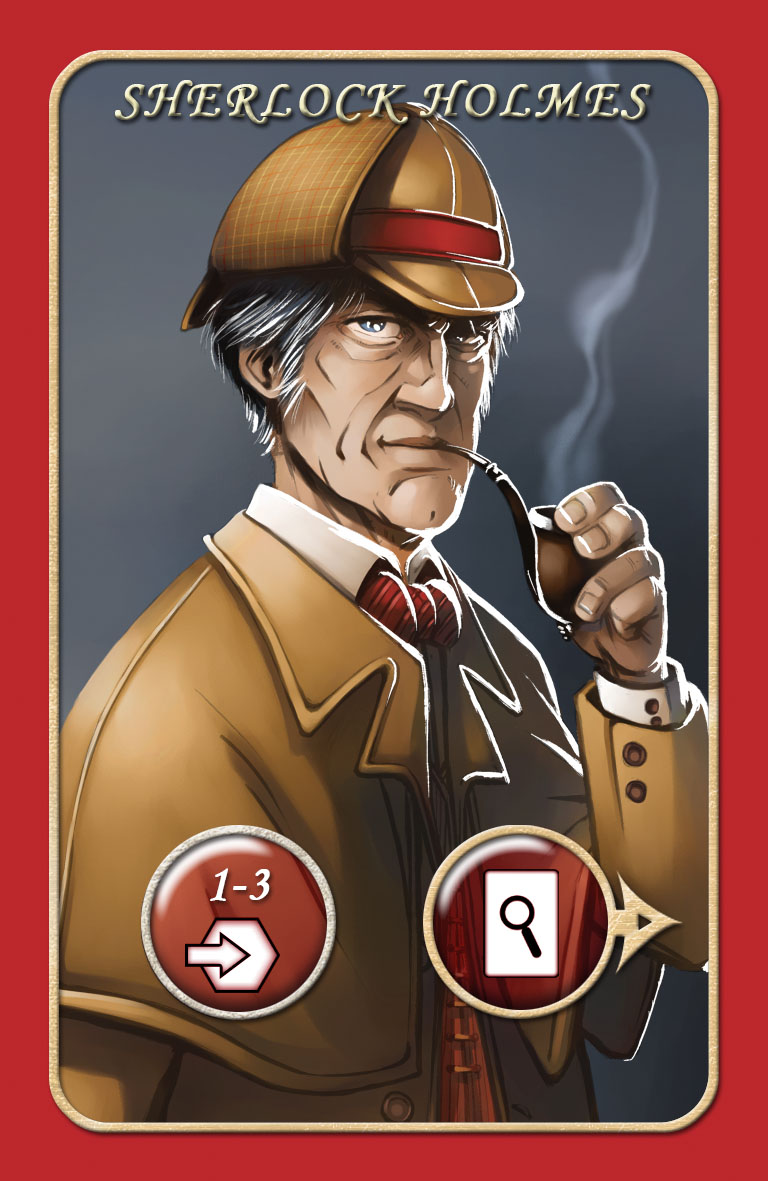 What makes each of the eight characters unique and interesting is that they all have a special ability that triggers at some point during their activation. Choosing the legendary Sherlock Holmes enables a player to draw an Alibi card – which either lets Jack conceal information or may help the detective eliminate a suspect. Holmes’ trusty sidekick John Watson can shine his lantern down an alley, illuminating everyone in its path. Some characters, like Sir William Gull and Sergeant Goodley, can even be used to reposition other characters. Every power has its own purpose, and knowing when and how to use them to your advantage is an important part of this game.

As an asymmetrical game, the winning conditions are unique for each player. In order for the detective to achieve victory, the player must make an arrest by moving any character he or she activates on top of the suspect believed to be the true impostor. However, if the detective makes a false accusation, Jack makes it off the board via one of the four exit points. If, at the end of the eighth round, Jack still hasn’t been captured, then Jack has outwitted the authorities and wins the game.

I’m a big fan of deduction games, and ‘Mr. Jack’ is easily one of my favorites. The designers have become well known in the industry for creating games with innovative concepts and deceptively simple mechanics. ‘Mr. Jack’ is a prime example of both. The way players share the pieces on the board is a stroke of genius, and there’s a fair bit of strategic planning involved when moving characters and utilizing their powers. Players can’t just think about themselves; they also have to take into consideration what they may be leaving behind for their opponent to use that round. More than a few times, I’ve found myself wanting to utilize one character, but ended up going with a different one just so that it wasn’t used against me. As the detective counts down the turns and Jack senses the noose tightening around his neck whenever a suspect is eliminated, there’s a considerable amount of tension felt on each side that’s constantly on the rise. For such a light game with only eight different actions, that’s pretty impressive.

‘Mr. Jack’ also delivers the goods with its theme, which succeeds rather well in bringing a late 19th Century manhunt across London to life on the table. One rule I haven’t mentioned yet is that during each of the first four rounds, one gaslight is actually removed from play, which assists Jack and creates atmosphere.

While the inclusion of Jack the Ripper might rub some people the wrong way, ‘Mr. Jack’ has no killings, no bloodshed, and no part of the game goes beyond a PG rating. He’s merely used as a symbol. And let’s face it, he’s one of the most recognizable villains of all time. However, if you find the structure of the game interesting but the theme still bothers you, be sure to check out Hurrican’s ‘Le Fantôme de l’Opera‘ – another terrific game that uses the ‘Mr. Jack’ system but is based on ‘The Phantom of the Opera’.

For the 10th anniversary of ‘Mr. Jack’, Hurrican has updated the game with a few notable differences worth mentioning here. The most noticeable change is that all of the artwork has been completely redone by an artist named Pierô, who also did the work found in the original release. The board is now much darker and gloomier than it was before. Another interesting touch is that each of the characters’ portraits appear to have aged a few years, too. The only other difference is that the positions of some of the manholes have been shifted around a bit (and a new one has been added to the board). The starting positions for Miss Stealthy and John Watson have also been switched. These particular changes were made for balancing purposes to put both sides on more of an even keel, since statistics indicated that the detective side had a slight edge over Jack.

Note: Hurrican has made a PDF available for download for those with the first edition who want give the updated setup a try. 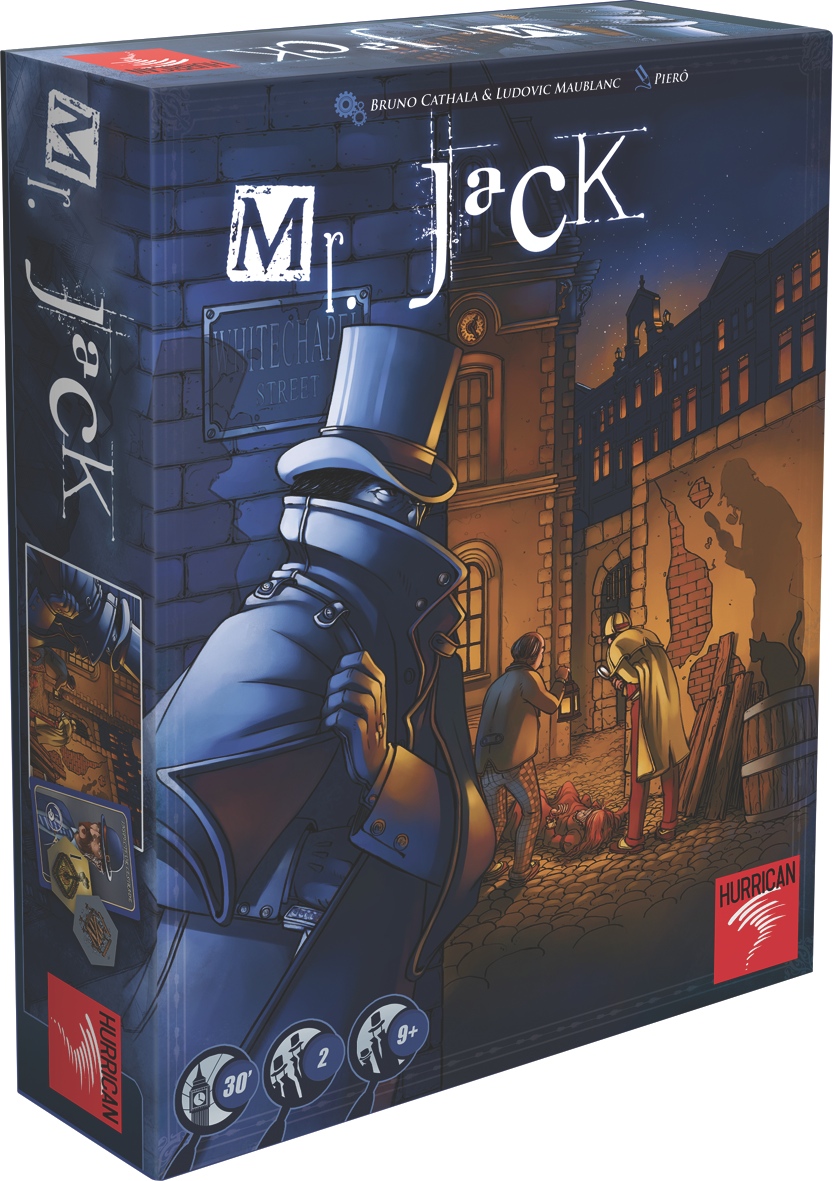 [Order ‘Mr. Jack’ (Revised Edition) from Amazon or from Asmodee.]