Get ready to embark on a journey to a lost world (shh… don’t tell InGen) as we take a look at Matagot’s new board game ‘Raptor’, developed by acclaimed game designers Bruno Cathala and Bruno Faidutti.

Present day, on an isolated island in the Pacific Ocean.
“The expedition is about to land on the shore. The scouts we’ve sent came back wounded, but have confirmed the information we had: not all dinosaurs have disappeared! On this island, a female velociraptor lives with her babies. So far we’ve seen five of them, but there might be more. Our mission: to capture the children, alive, or neutralize the mother, who is fast and powerful. It will be an epic face-to-face struggle, but every true scientist would love to take my seat. Let the hunt begin!” – Professor Lindenbrock, Paleontologist

‘Raptor’ is an asymmetrical board game for two players where one player takes on the role of researchers who set out to catch living dinosaurs in the name of science, while the other controls the mother velociraptor who will do whatever is necessary to protect her young.

Components include ten cardboard game tiles, a mini deck of nine action cards for each player, six plastic velociraptor miniatures (five babies and one mother), ten plastic scientist miniatures, fifteen cardboard tokens (ten fire and five sleep/bullets), nine cardboard 3D rocks (minor assembly required), two player aid sheets, and a full color rules booklet. What’s also worth mentioning is that each of the scientist miniatures even have their own unique sculpts — which I thought was a nice little touch.

The game board consists of ten double-sided tiles and there are two different landscapes to choose from: jungle or savannah. After selecting one of those two settings for a game, the six larger square tiles are placed randomly in a 2×3 pattern forming a rectangular board. The four smaller L-shaped tiles are then placed on the shorter sides of the rectangle to create exit points for the baby raptors. The raptor player places the mother in any space on either of the two central tiles and one baby on each of the five remaining square tiles. The scientist player puts one scientist on each of the four L-shaped tiles, keeping the remaining scientists in reserve. The exit spaces (the half circles) may only be used by the babies to flee the area. Finally, the 3D rocks are placed on the indicated spaces marked with rubble.

‘Raptor’ takes place over several rounds. During each round, both players draw a limit of three cards from their own action decks, which are easily identified by the different artwork on their backs. Players then play one of the cards from their hand face down, and the cards are then revealed simultaneously. Played cards normally remain in play to give players some knowledge of what their opponent still has access to for future rounds. More importantly, these cards have numbers and symbols on them that determine player initiative, what kind of special actions may be taken, and how many basic action points can be spent that turn. 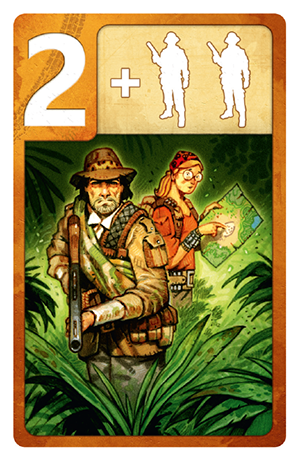 The player who played the card with the lower number goes first and may perform the special action indicated by the symbol on their card. Raptor special actions can do things like call baby raptors to the mother’s tile, wake up sleeping babies and/or remove sleep tokens from the mother, using fear to knock down a scientist and make them useless, or even have the mother temporarily disappear from the board and reappear after the opponent takes an action. This action in particular even lets her see the opponent’s card first before playing hers in the next round… clever girl! The special actions of the scientists, on the other hand, can knock out babies with sleeping gas, box raptors in by starting fires, gain extra movement via a jeep, or call in reinforcement scientists from the reserve. Both players’ “1” card also reshuffles all of their previously played cards back into their deck (in addition to the card ability), while the “9” has no effect.

As for the player who played the higher number, that person instead gains a number of basic action points equal to the difference of played card values. For example, if a “3” and “6” were played in a round, whoever played the “3” takes the special action first, then the player who revealed the “6” gains 3 action points (6-3=3) to spend however he or she chooses on a variety of basic actions. 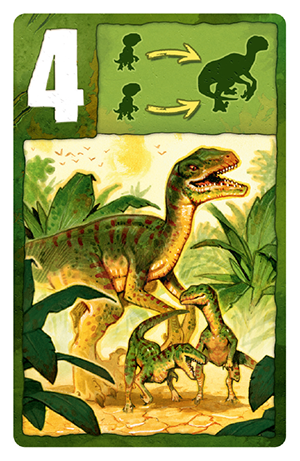 Raptor basic actions include moving a raptor (babies move one space at a time while the mother can move any number of spaces in a straight line), the mother may kill an adjacent scientist, the mother can wake up an adjacent sleeping baby (as long as it wasn’t put to sleep in the same round), or the mother can put out an adjacent fire as well as all fires connected to it. Basic actions of the scientists include moving one space, putting an adjacent baby to sleep, capturing an adjacent baby, shooting the mother with a tranquilizer along a straight path (but not through rocks or standing scientists), or recovering from being frightened and standing up. The only restriction is each scientist in play may only perform one “aggressive action” (shooting or capturing) per turn. It should also be noted that all movement and targeting is orthogonal in this game — diagonals are never allowed.

Finally, in cases where both players happen to reveal the same number, then the cards basically just cancel each other out with no effect and players move on to the next round.

The goal of the scientist player is to capture three baby raptors or neutralize the mother by hitting her with a total of five sleep tokens. The raptor player wins if either: the three babies exit the play area, or all scientists have been eliminated from the board.

One aspect of ‘Raptor’ that should definitely appeal to many is the theme. Dinosaurs are about as popular as zombies these days, yet there haven’t been a lot of solid games produced to feature them. ‘Raptor’ is one of the good ones. There’s plenty of depth and strategy to be found in this tactical battle of hunter vs. the hunted. The unique actions give each side their own distinct style and suit their roles rather nicely, so the subject matter most certainly doesn’t seem pasted on at all. ‘Raptor’ is pretty much a scene from one of the ‘Jurassic Park’ films, and almost feels like you’re getting two games in one.

The rules for ‘Raptor’ are also well written and easy to understand. The rulebook consists of only about eight pages, and while I’d still recommend taking a few minutes to go over them in full once or twice, most of the stuff you really need to know, from card iconography and basic actions to victory conditions, is found right on each of the included player aids. This makes gameplay run much smoother since you’re not always looking things up in the booklet. Plus, the aids are a great tool to have when trying to teach someone new to the game. After playing a few times, you probably won’t even need them anymore, but I still wish more games came with things like these to make first plays more about the fun and less about the learning. 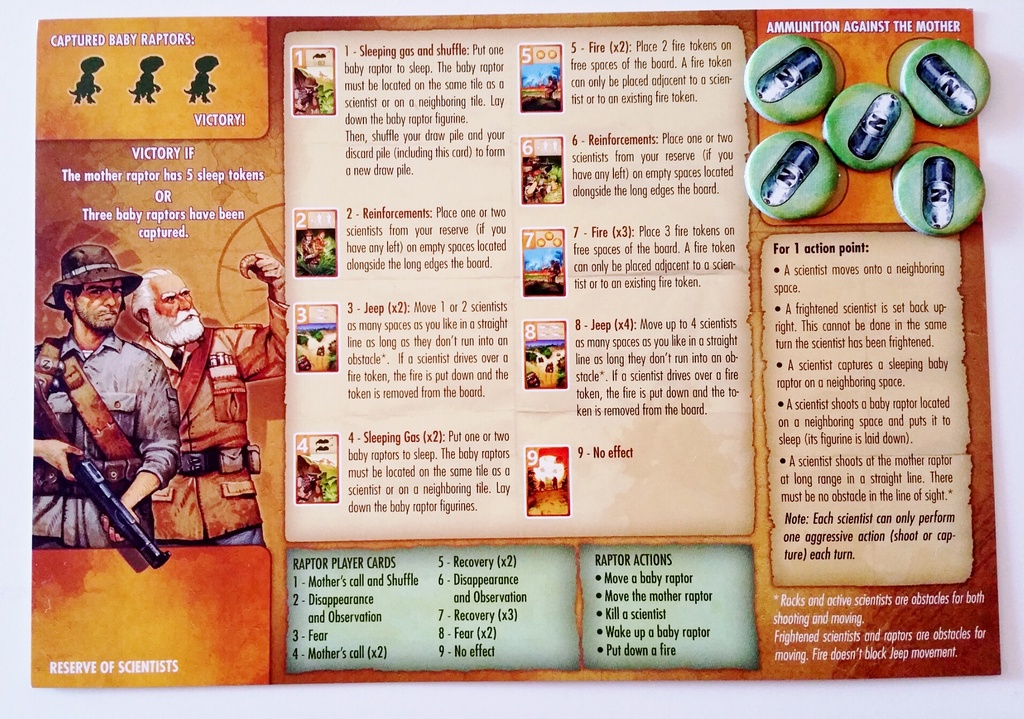 The bottom line is, ‘Raptor’ is a blast of a game with just the right amount of luck and strategy. Sometimes you may want to play a certain low valued card for a desired effect — such as replenishing your deck, but then you run the risk of giving your opponent a pile of actions just by making that choice. The actions themselves are cleverly done, too. I really like how the adult raptor can hide and reappear in a better position and also the way the scientists can actually slow her down by reducing her actions with each tranquilizer hit (just don’t bank on winning that way, it’s harder than it looks). The endgame also gets pretty intense as the humans start building up their collection of baby dinosaur trophies, while the limited number of scientists are killed off one by one. There is so much to think about, and the unpredictableness can bring about some wild and exciting turns. 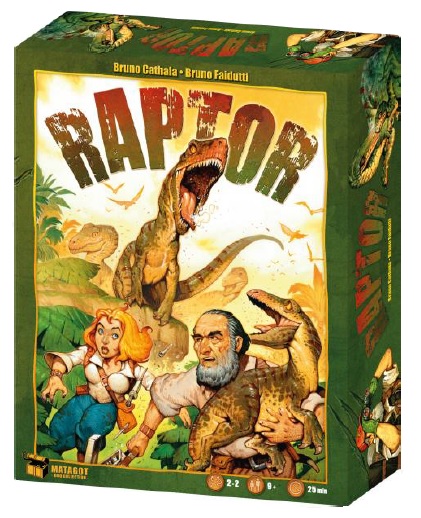