Stop me if you’ve heard this one before: Returning home on Halloween night, a knife-wielding, escaped mental patient mercilessly stalks a babysitter.

If you’re bracing yourself for a straightahead rip-off of Halloween, relax. Un-brace yourself. De-brace? There’s gotta be a word for that. I’m guessing there’s also a term for whatever it is that Trick or Treats is, exactly. Storming into theaters during the golden age of slasher cinema, maybe it’s supposed to satirize or deconstruct teen body count movies. Beats me. All I know is that, for better or worse, there’s nothing out there quite like it. 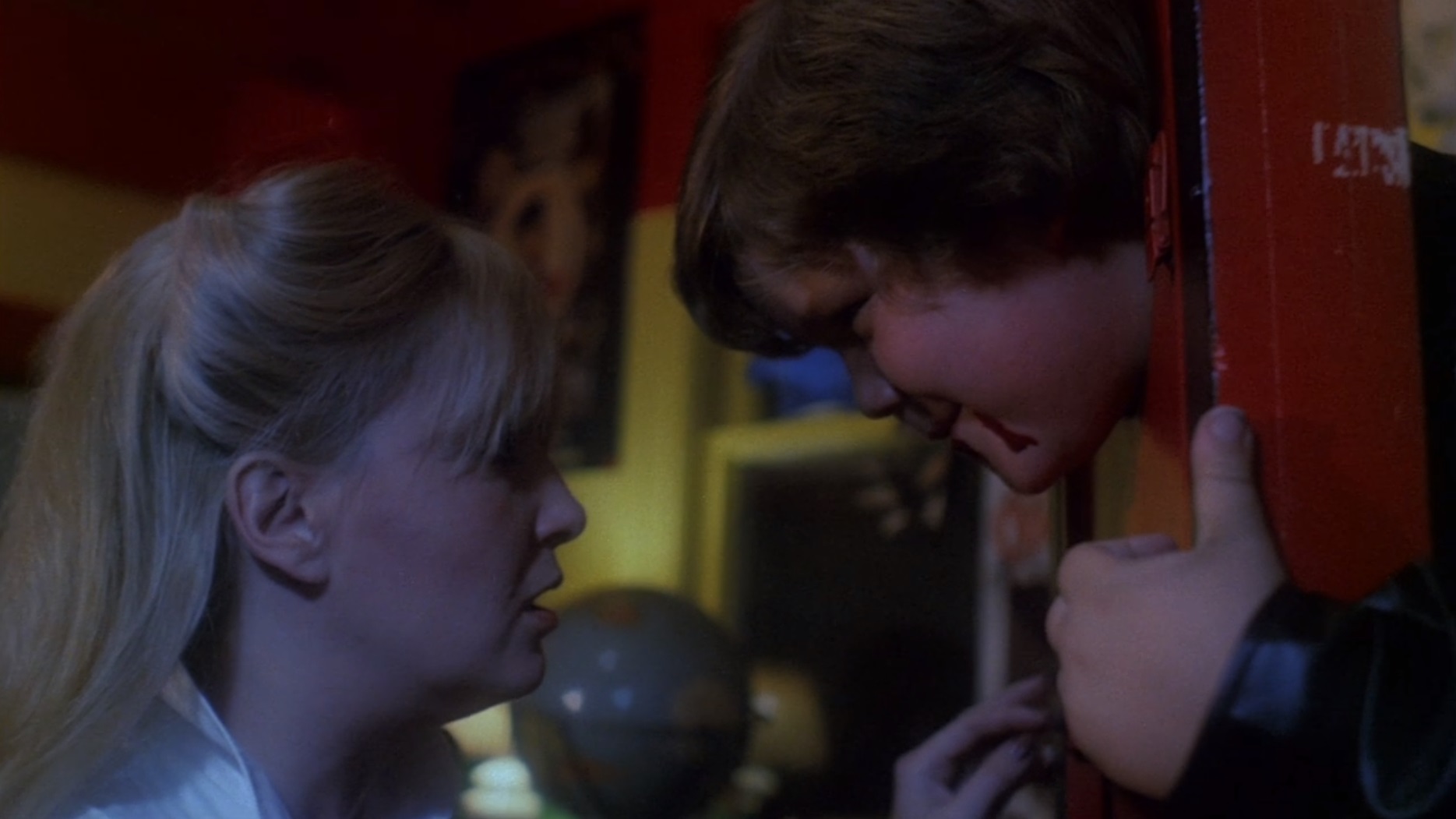 Trick or Treats opens with a prologue, because of course it does. Only instead of a savage murder or childhood trauma that’d linger in a killer’s mind for decades, it’s some schlub whose breakfast is interrupted by a couple of men in white coats. They chase multimillionaire Malcolm (Peter Jason from They Live) around his backyard for two and a half interminable minutes, clumsily attempting to strap a straightjacket on him. As Malcolm’s howls for help go ignored by his scheming wife (Academy Award nominee Carrie Snodgress), it’s just about time for a “Several Years Later” intertitle.

Linda, of course, tells him the story of the Boy Who Cried Wolf. You’d think that would land hard in what’s ostensibly a slasher flick, as Christopher’s loony bin escapee of a father picks tonight to return home and exact his revenge. But no, not so much. The kid barely even sees this nutjob running around with a knife, and the same goes for us as viewers. Malcolm doesn’t arrive home until the final half hour of the movie, and he doesn’t bother to rack up any murders along the way. We’re in the last twenty minutes before there’s a body count on the board, and the tally stands strong at 1 until right at the end.

I’d grouse and groan about Trick or Treats if I weren’t so fascinated by whatever it is that writer / director / producer / editor / cinematographer Gary Graver is aiming for here. It’s hardly the slasher that the movie’s poster art makes it out to be. By design, it has nothing resembling horror or suspense. Trick or Treats is almost a comedy, but it seems more content to settle for being intriguingly odd rather than outright funny. I could say more, but if I tell you that cult icon Paul Bartel plays a hobo forced to strip nude by a psychotic killer in a wig and brassiere, or that Christopher’s folks ponied up for a fully-functional guillotine for this little boy’s bedroom, a mental picture can’t help but form. 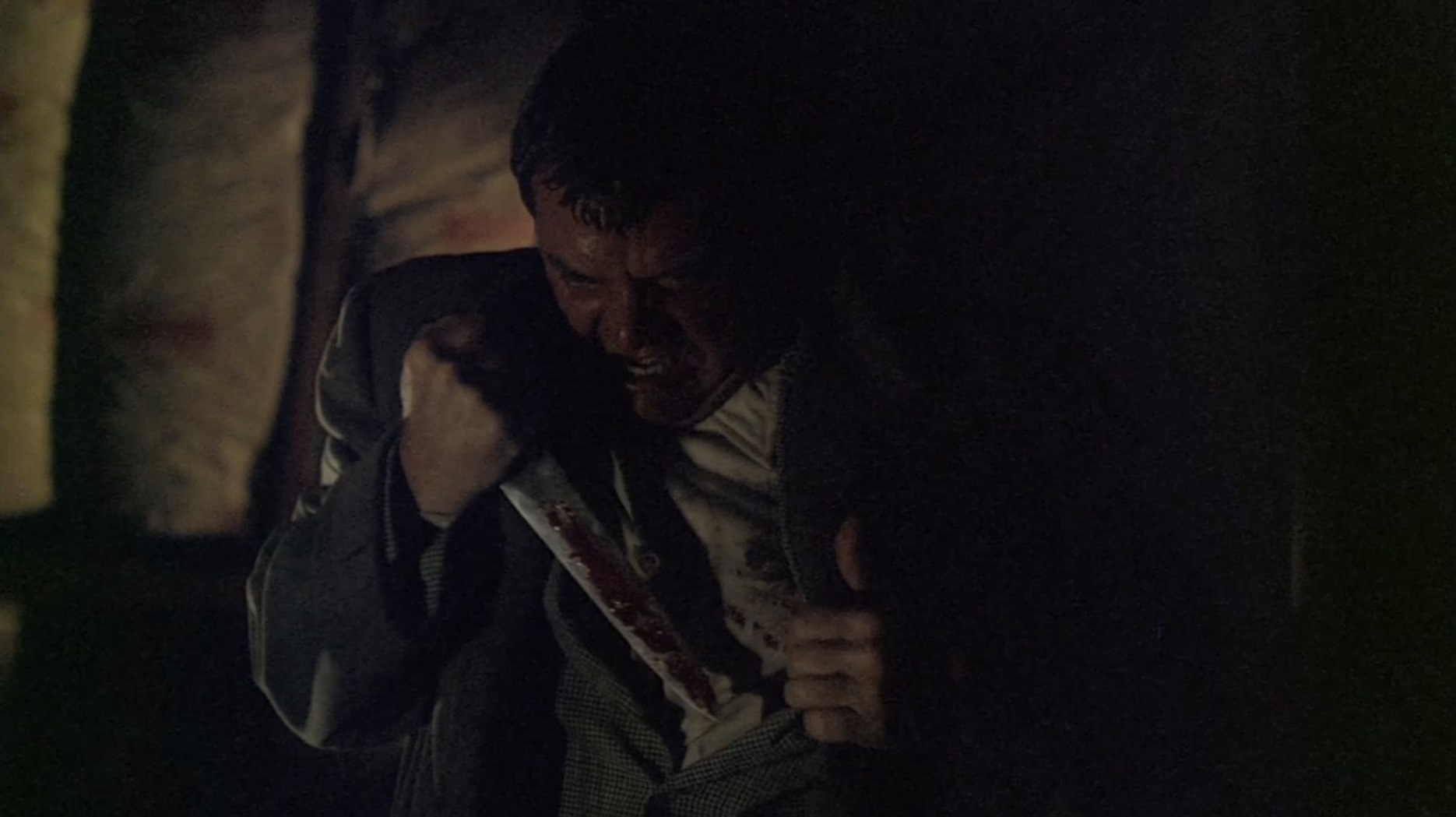 A character as petulant as Linda seems like she was written with a teenager or barely-twenty-something actress in mind, so it’s kind of jarring to have someone in her mid-thirties like Giroux as the lead. I get that Chris is a nightmare to babysit, but they’re both insufferable. At first, I thought Linda was hamming it up, pretending to be frothing with anger with a wink towards Christopher, but nope! Just about from word one, she spends the entire movie seething and loathing the kid, leaving me with no one to root for. Christopher’s endless barrage of magic tricks mostly seems like stuff a kid could’ve bought off the shelf at a novelty shop, which… points for authenticity and all, but it’s not particularly inspired. It’s also kind of puzzling how Linda keeps falling for it, but in the words of The Bard, she ain’t the sharpest tool in the shed.

Too many scenes drag on forever. Graver doesn’t subscribe to the Rule of Three when it comes to comedy so much as the Rule of Twenty-Seven, such as when a trick-or-treater ties a string to a knocker and dupes Linda into opening the door more times than I’d care to count, or Christopher slicing some Pepperidge Farm summer sausage into forty-five different pieces. Most of what’s introduced doesn’t really go anywhere. An awful lot of the cast only land a couple of scenes before vanishing, making little-to-no impact along the way. David Carradine, despite his high billing, only pops up in a single, early scene. Decked out for a performance of Othello, Steve Railsback spends something like a minute total on the phone. You get the idea.

Trick or Treats kind of feels like it was made on a lark, giving a bunch of friends an excuse to pal around together. Graver casts his wife and kid, for instance, and Giroux and on-screen lover Railsback were married at the time as well. There are multiple Kung Fu alums, and the list keeps going from there. Heck, the house that Snodgress’ character presents as her own – where most of Trick or Treats is set – is actually where the actress lived in real life. I’m sure the film was a blast to make, but it’s not nearly as much fun to watch.

I could buy that Trick or Treats is attempting to make a commentary on the state of horror in the early ’80s. At least, its characters have strong opinions about the art of movie-making, with a monologue about film editing for no reason in particular, plus a peek at a schlocky head transplant from movie-within-a-movie The Monster Strikes, which I’d rather be watching instead.

Trick or Treats is dreadful, but at least it’s fascinatingly awful rather than just more of the same. C’mon, Orson Welles is credited as a magic advisor! How many other ’80s slashers can say that? 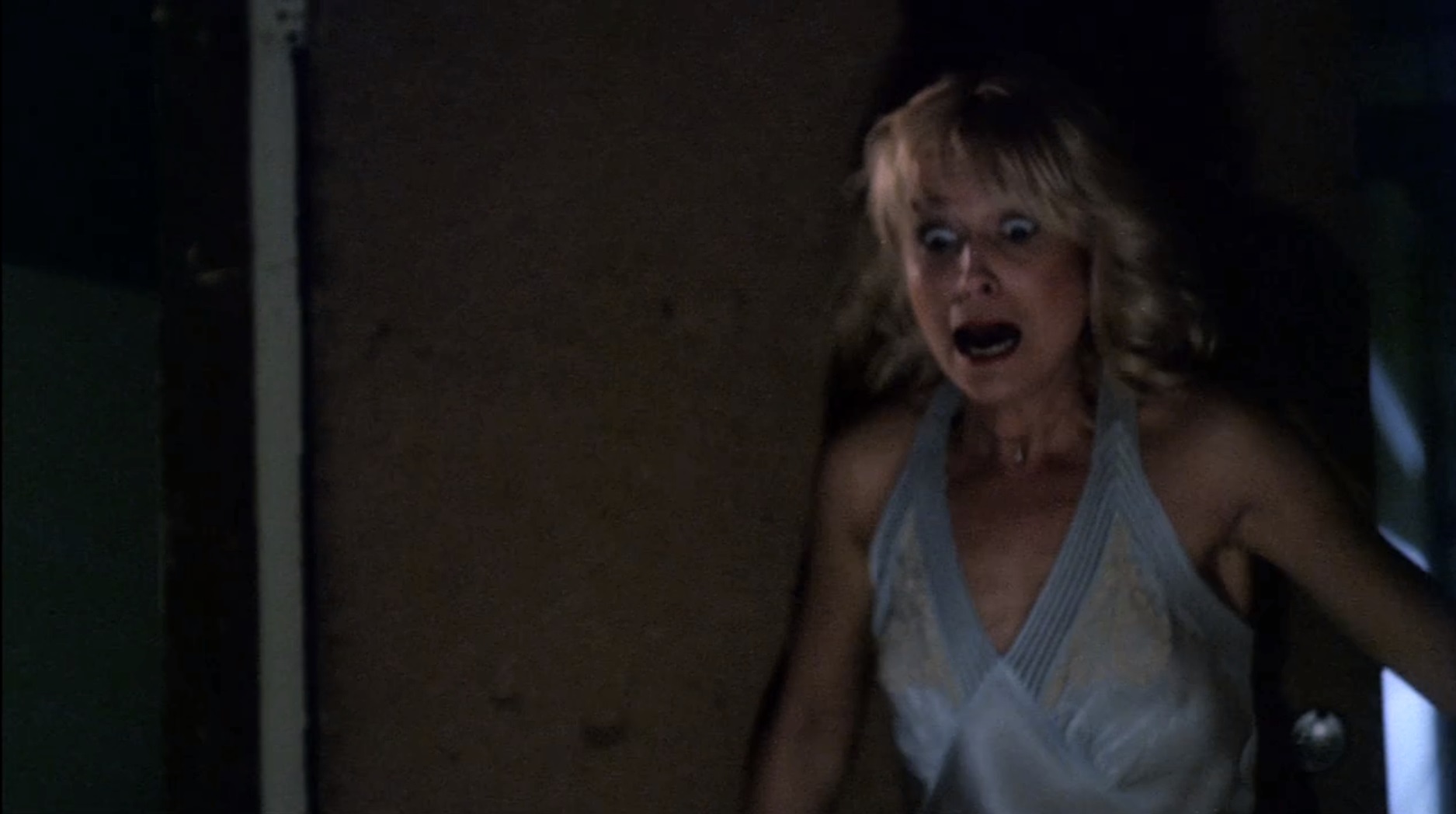 Code Red’s extremely limited edition of Trick or Treats has been out of print for years. The prices that Blu-ray release is going for on eBay these days is more terrifying than anything in the movie itself, but at least you can stream the flick on Amazon at no additional charge if you subscribe to Prime.