Thanks to a recent Amazon Lightning Deal, I (perhaps foolishly) made an impulse buy on an item I’d pondered for a while. The Laser Twilight laser stars projector claims to “Bring the Night Sky into Your Home.” That’s a fun idea for a home theater.

Given that most home theaters are typically dark – or at least darkened – rooms, it’s pretty common for owners to decorate them with a night sky motif on the ceiling. This can extend anywhere from some glow-in-the-dark star stickers to installing LED lights or even expensive light panels. Personally, I don’t want something that’s going to glow all the time even while I’m watching movies, nor do I want to install something permanent. Therefore, a light projector that shines stars upward onto the ceiling seemed like the easiest and least invasive method for my needs.

A number of products that do this are available. Some are fairly inexpensive, but none of those were quite what I wanted in my room. Smithsonian makes a model that projects accurate constellation patterns, but it’s essentially just a slide projector that rotates static images. Other units shine streaks of light that move all over the room for an alleged borealis effect, but they look more like lava lamps to me.

The Laser Twilight projector is fairly pricy (currently $95 on Amazon), which kept it sitting unpurchased on my wish list for a long time, but its features were more what I was looking for. Some of the user reviews there are ecstatic about it, but an alarming number have also complained about quality control issues and defective units. That left me hesitant to buy. However, when the Lightning Deal knocked a little over $20 off that price, I decided to take a chance. 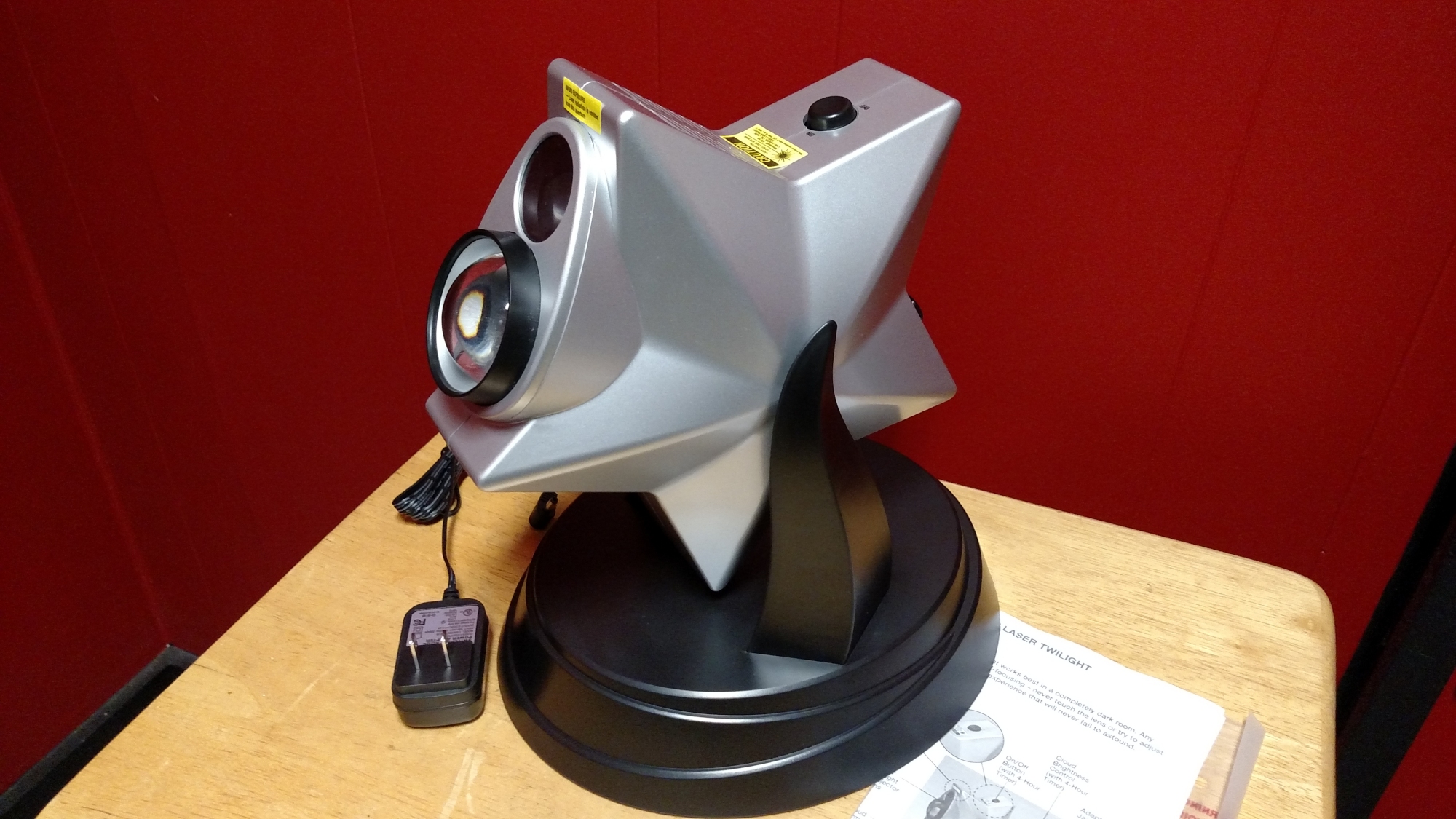 When you get it out of the box, the projector kind of looks and feels like a toy. It’s a very lightweight item molded in a gimmicky star shape. I suppose if your intention is to use it in a kids’ room, that’s appropriate enough, but for the money I expected something a little more… well, just a little more.

The projector has two functions: a laser that shines the star pattern, and a bulb lamp that shines a blue nebula cloud. You can use them together or either one individually. You turn on the nebula and adjust its brightness with a dial. The stars have a separate power button that resets if disconnected from power. If you unplug the unit and plug it back in, you have to push the button again to turn it back on. This is disappointing for me, because I had planned to plug it into a “smart” electrical outlet that I can turn on and off with Alexa voice control. Sadly, that will only work for the nebula cloud portion. Both lamps also have (individual) non-defeatable timers and will automatically turn off after four hours of continuous use.

The laser stars are green (not white) and sparkle a little. They do not project realistic constellation patterns, just a generic star field. None of this was a problem for me, but you should know what you’re getting before you buy. Because the light source is a laser, you must be careful not to look directly into it or risk a blinding hazard. That can be very problematic for an item that’s intended to sit at a medium or low height and shine upwards. If you have young children who are inclined to look too closely at sparkly objects, you should be very careful where you place this projector. I would personally not put this in a kids’ room or anywhere that my boys might run around unsupervised.

The stars project outwards with a very wide dispersal that, depending on placement, should be able to fill a pretty sizable room ceiling, if not the walls as well. I actually found the dispersal a little too wide and put a piece of black electrical tape over the bottom portion of the lens to mask it from shining onto my theater screen.

Perhaps the item’s best feature is that all of the stars move in complex patterns. They appear to circle around at different distances and in different directions in different parts of the sky. The motion is slow and subtle, but impressive. The nebula cloud also undulates and swirls about.

The device was designed to project onto a white ceiling and will no doubt give the best results that way. When I purchased it, I worried that the stars might not show up well on my black ceiling. Fortunately, at least after a few days of use, they’re plenty bright enough to display clearly. Sadly, if they dim over time, there is no brightness adjustment for the laser.

It could just be my black ceiling at fault, but I find that I need to crank the brightness on the nebula cloud to maximum in order make it show up with the sort of clarity and vivid color promised on the box and in demonstration videos. The bulb has enough range for this, but doing so washes out the stars. For the time being, I think I prefer just the stars on their own.

Another downside is that there’s no focus control for either the stars or the cloud. It’s almost inevitable that, no matter where you put the projector, some (perhaps a lot) of the stars will be fuzzy.

Despite these caveats, I think the results on my ceiling look pretty cool. I tried to take some pictures and videos, but unfortunately I don’t have a camera good in low light and they all came out pretty crappy. 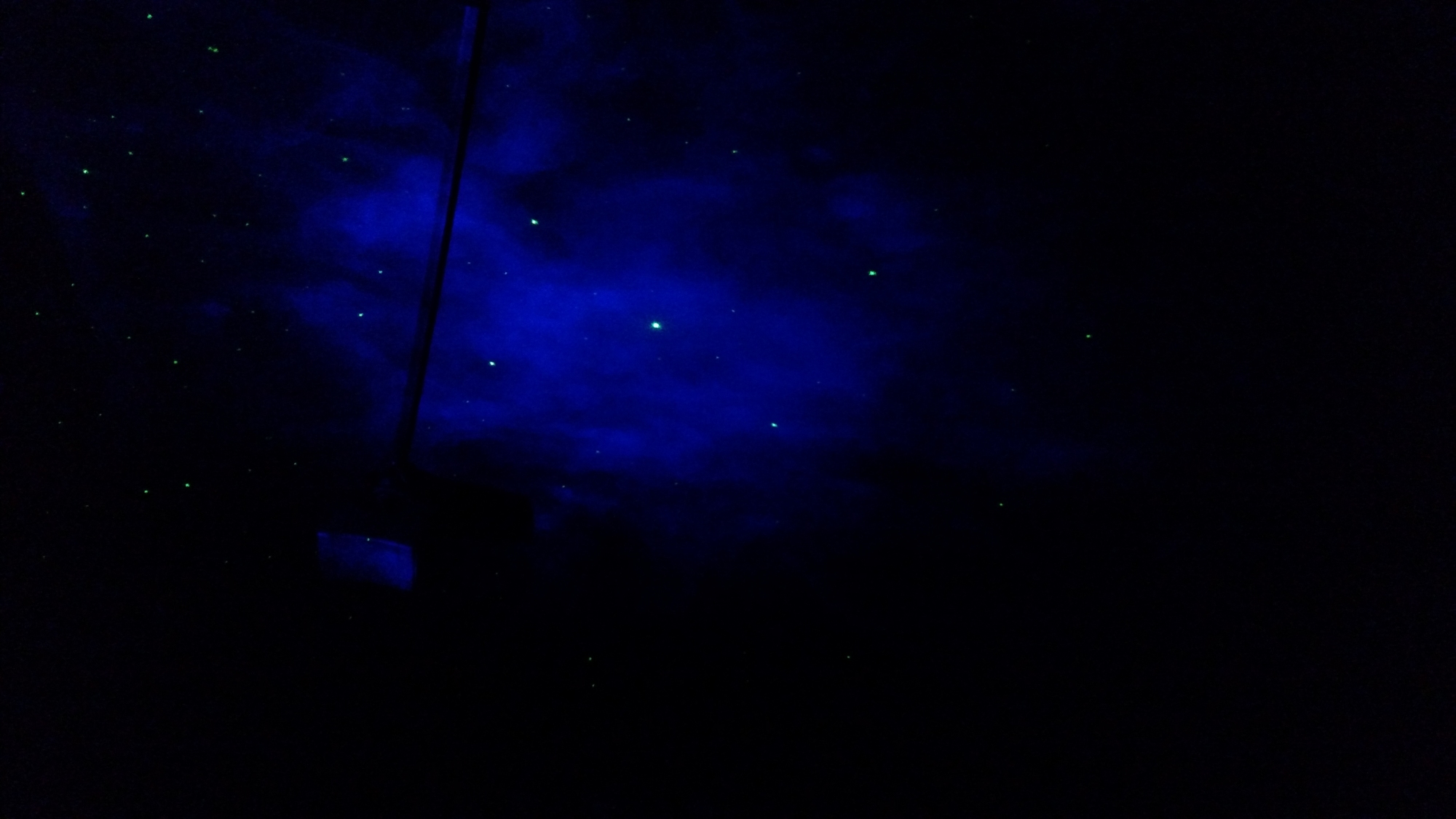 This video review I found on YouTube provides a much better demonstration of what the projector does:

Overall, I think this is a fun little toy. However, it’s overpriced for what it does, even with the Lightning Deal I snagged (which is not currently available). The numerous Amazon user reviews complaining about lamp failure after a just a few months (some even a few days!) of use also leave me concerned about whether I made the right decision. For the time being, I’m going to play with it for a little longer before I decide whether it’s a keeper. I may like the idea of it better than I like the product itself.