These days in the home theater world, it seems like everything is 4k this or 4k that. If it isn’t 4k, or doesn’t at least come from a 4k source, it must be garbage. Anyone can see that 4 is a higher number than 2, so logically 4k must always be better than 2k. Except when it isn’t. Technical specs only tell part of the story.

John Carpenter’s horror classic ‘The Thing’ is a popular home video staple that’s already had a couple of Blu-ray releases in the United States. Last year’s Collector’s Edition copy from Scream Factory received high marks from Shannon in his Blu-ray review. Nonetheless, some fans were put off by the published specs, which indicated that the video transfer derived from a 2k scan of the film’s interpositive. That source is at least one generation away from the original camera negative, and who even still does anything in 2k anymore? No matter how good it may have looked, surely it wasn’t good enough.

Meanwhile, Arrow Video in the UK announced its own restoration effort, which would come from a new 4k scan of the camera negative, supervised by both director John Carpenter and cinematographer Dean Cundey. Arrow has a pretty strong reputation as being something of a Criterion equivalent for cult movies, and everything about this project sounded like it ought to be the end-all/be-all definitive Blu-ray edition of ‘The Thing’ (at least, until Ultra HD, but that doesn’t seem to be on the docket anytime soon).

Arrow’s Limited Edition Blu-ray was released last week in two packaging variations – either a box set packed with physical bric-a-brac or a SteelBook. Anticipation for this release was so high that both sold out well in advance, but a Special Edition with the same disc in a keepcase will be released on November 20th. I ordered the SteelBook and received it late last week, good timing for a pre-Halloween viewing.

Due to distribution rights issues, the Arrow disc is locked to Region B. An American viewer will need a region-free Blu-ray player to watch it. The booklet included with the Blu-ray contains the following text regarding the video transfer:

Primary grading and picture restoration was completed at Silver Salt Restoration in London.

Audio mixes were produced and delivered by NBC Universal.

That sounds great, doesn’t it? With all that work and those credentials behind it, I sat down expecting to be blown away. Although the movie looks decent for the most part, nothing about it struck me as particularly stunning or revelatory. In fact, the image quality is pretty soft most of the time. At first, I questioned whether perhaps that was just the nature of the film’s original photography. However, a quick look at the screencaps Shannon included in his review of the Scream Factory disc put that notion to rest pretty quickly. I took my own screencaps matching his as closely as I could. (The last one was provided by one of our other reviewers, E.)

Expand these to full size in your browser window and you can see that in every instance, the Scream Factory disc is sharper and more detailed, sometimes dramatically more. Colors are also cleaner and better resolved. 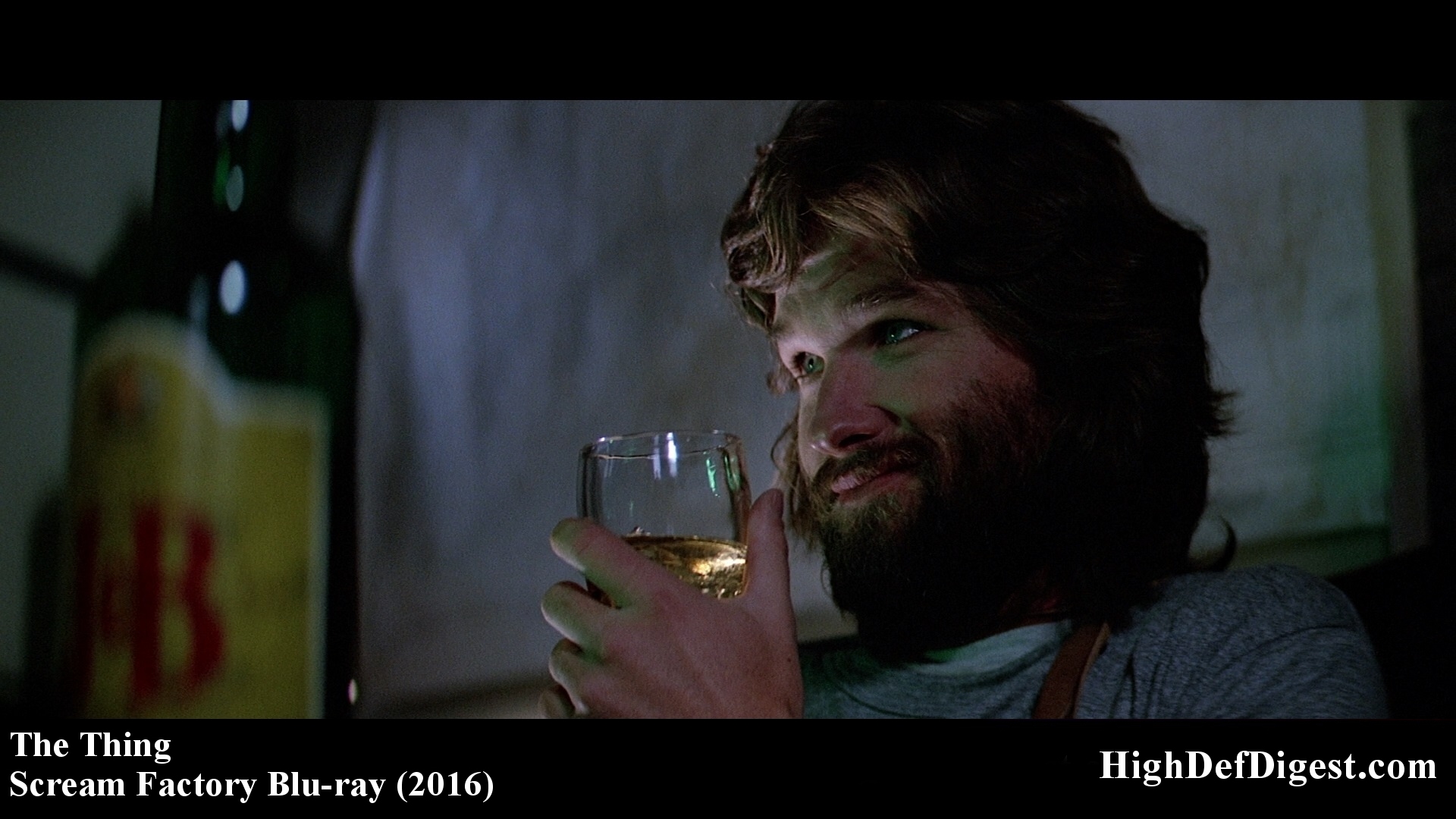 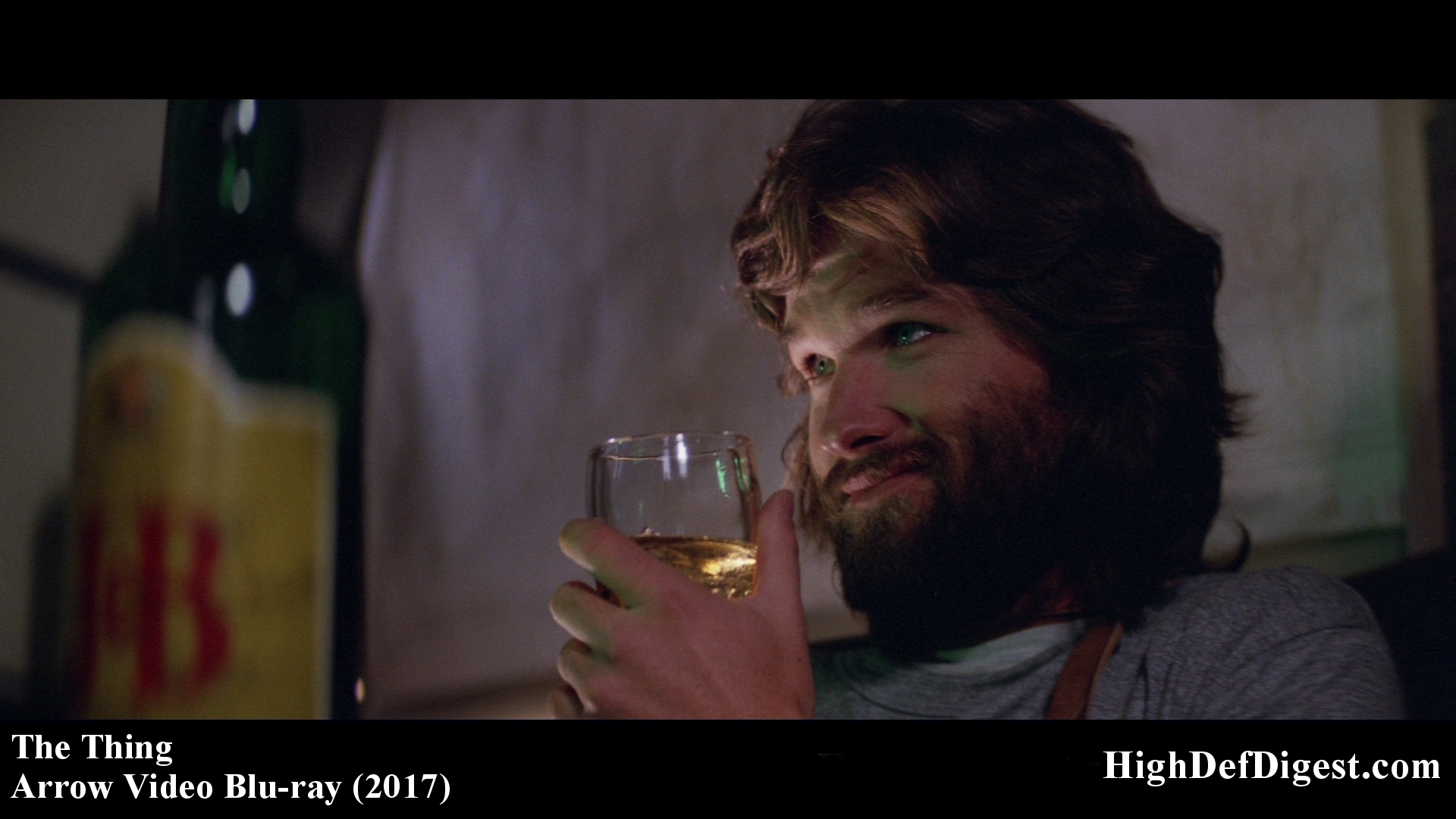 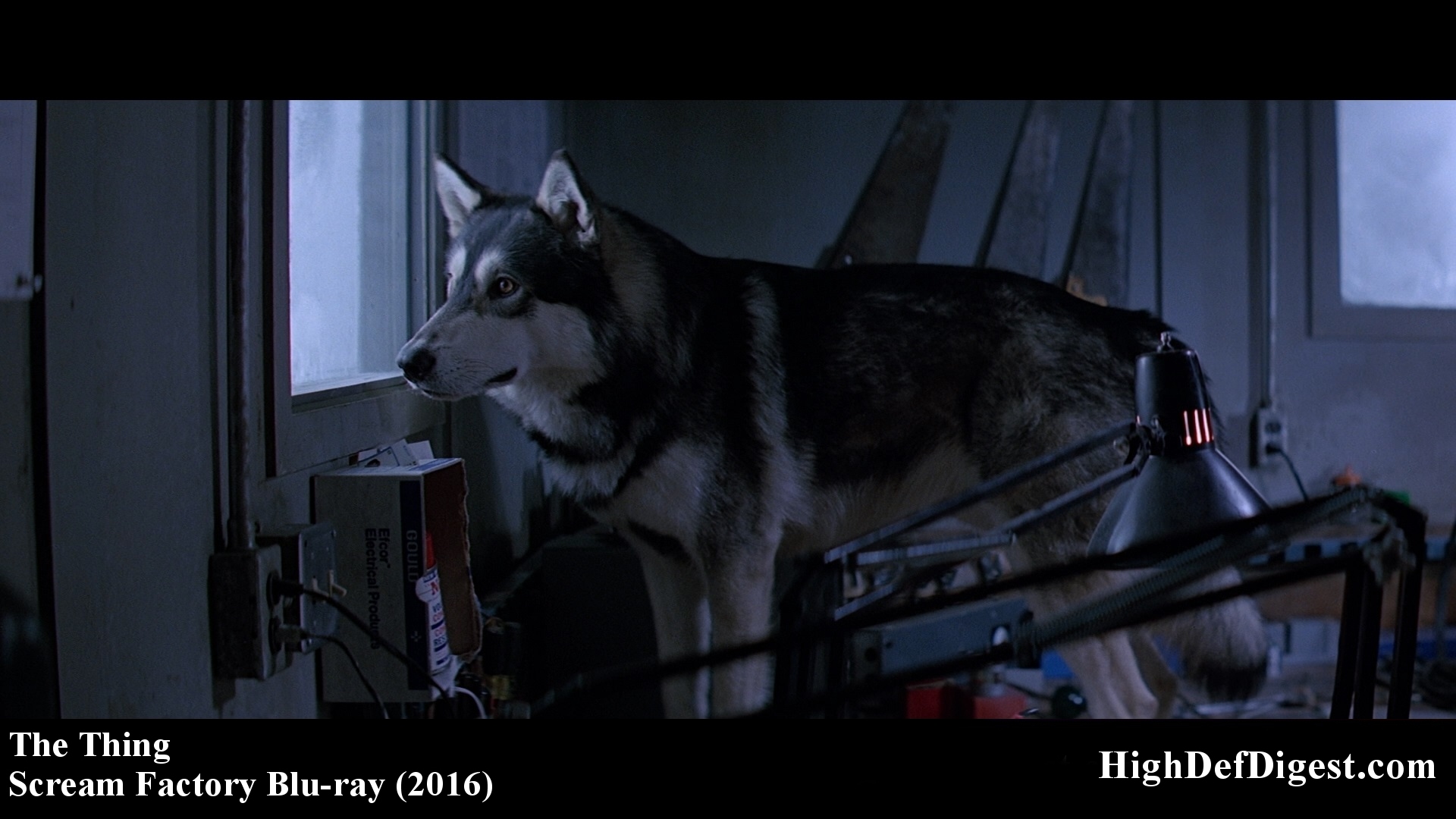 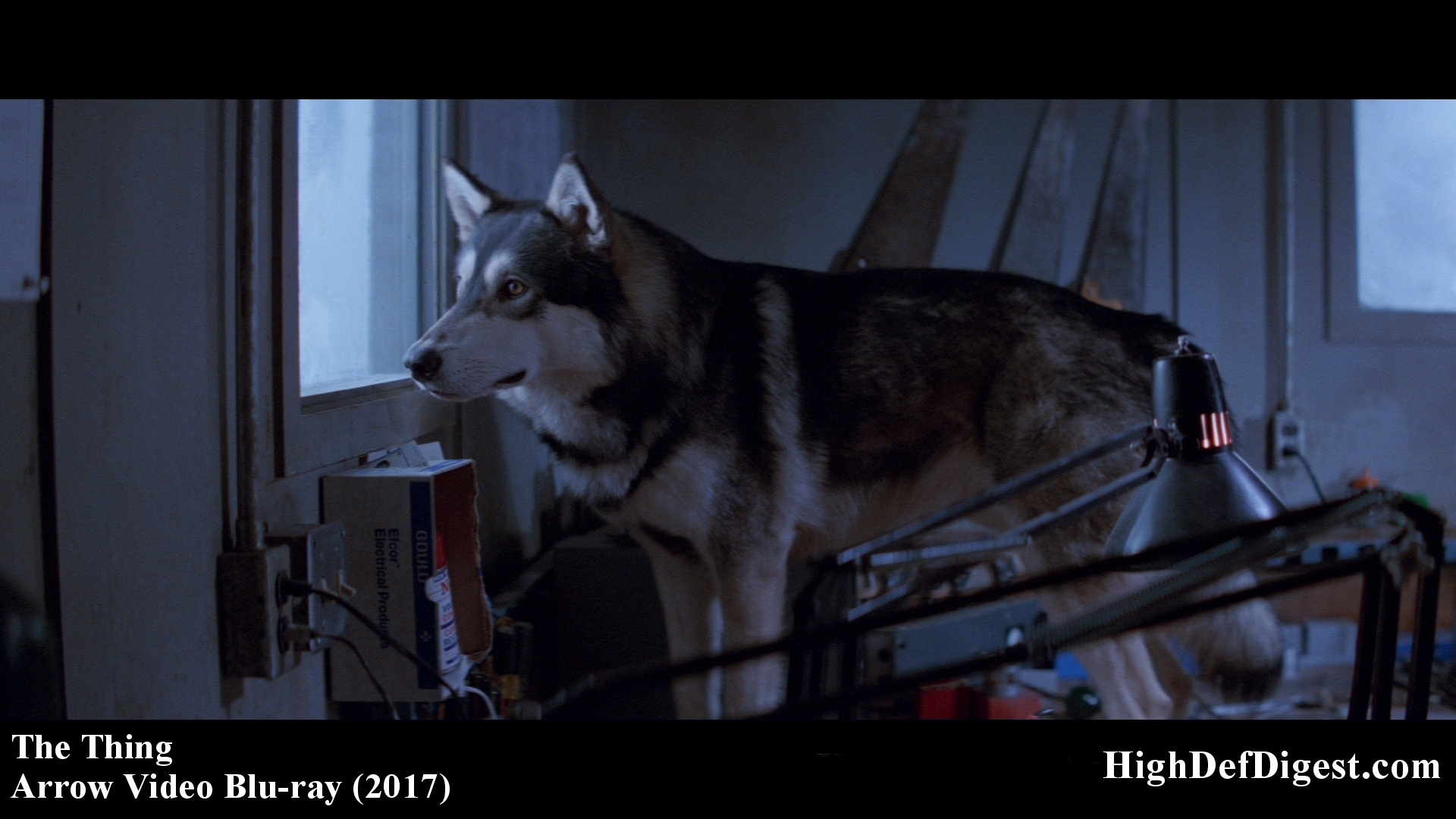 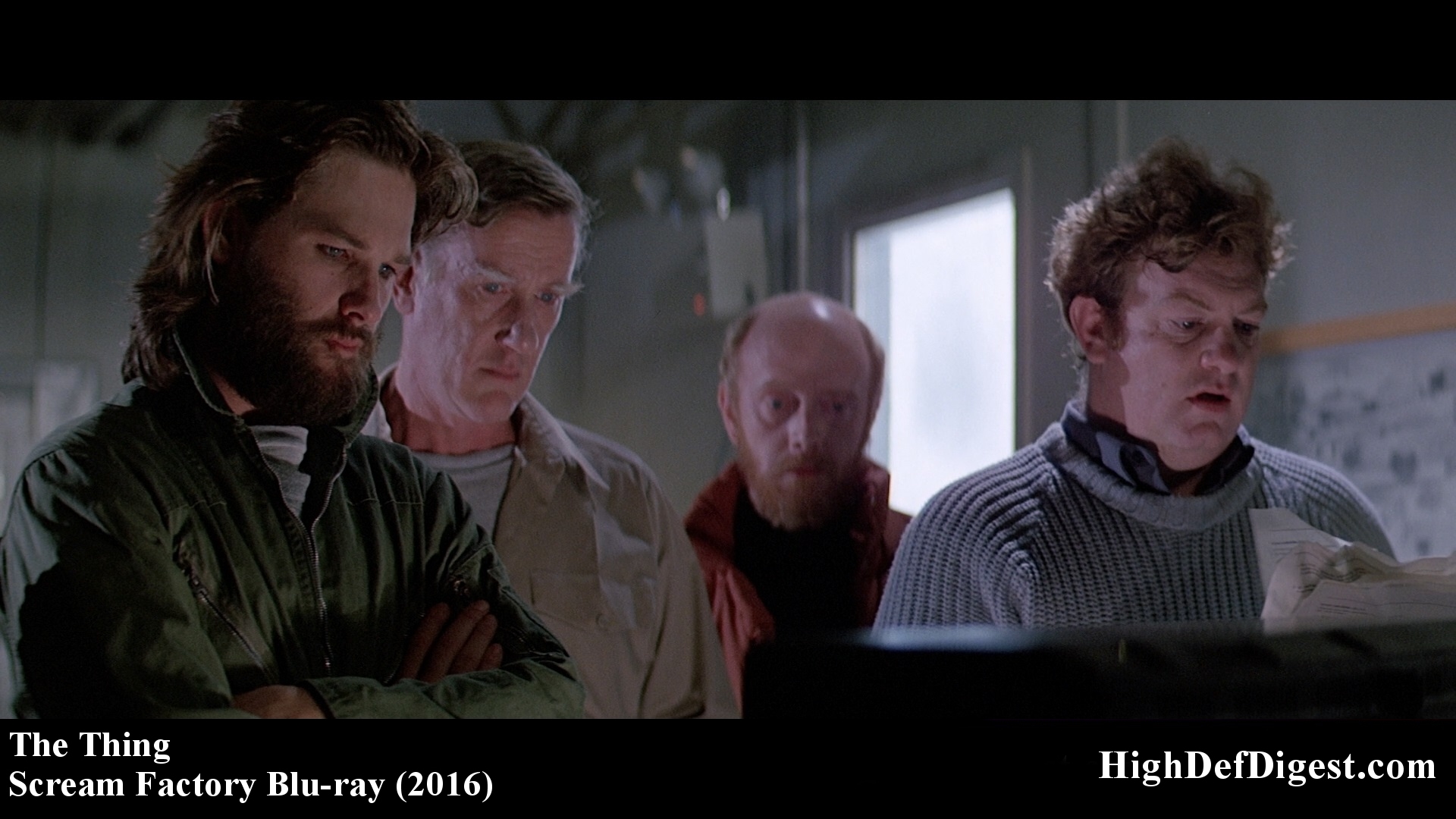 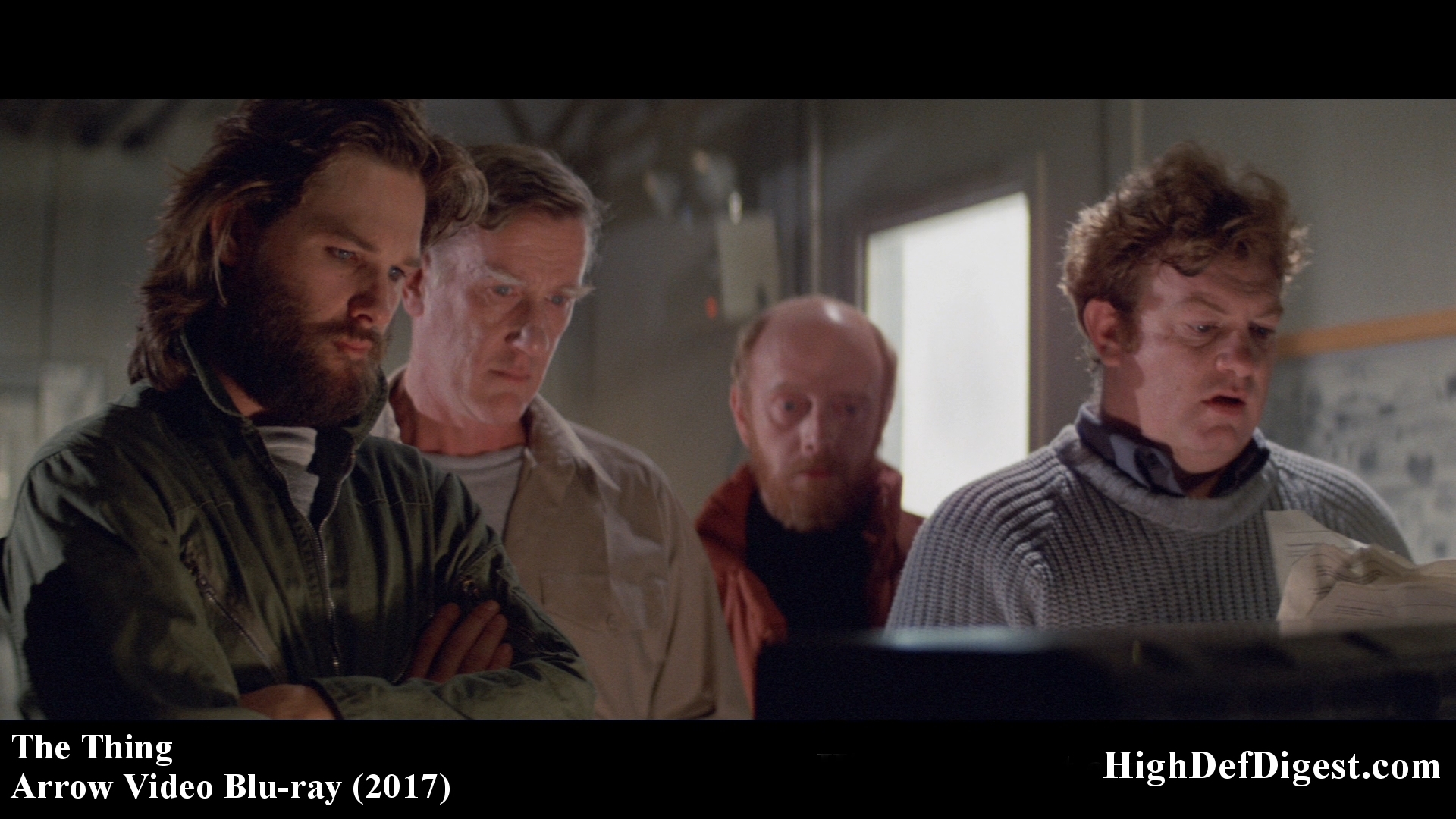 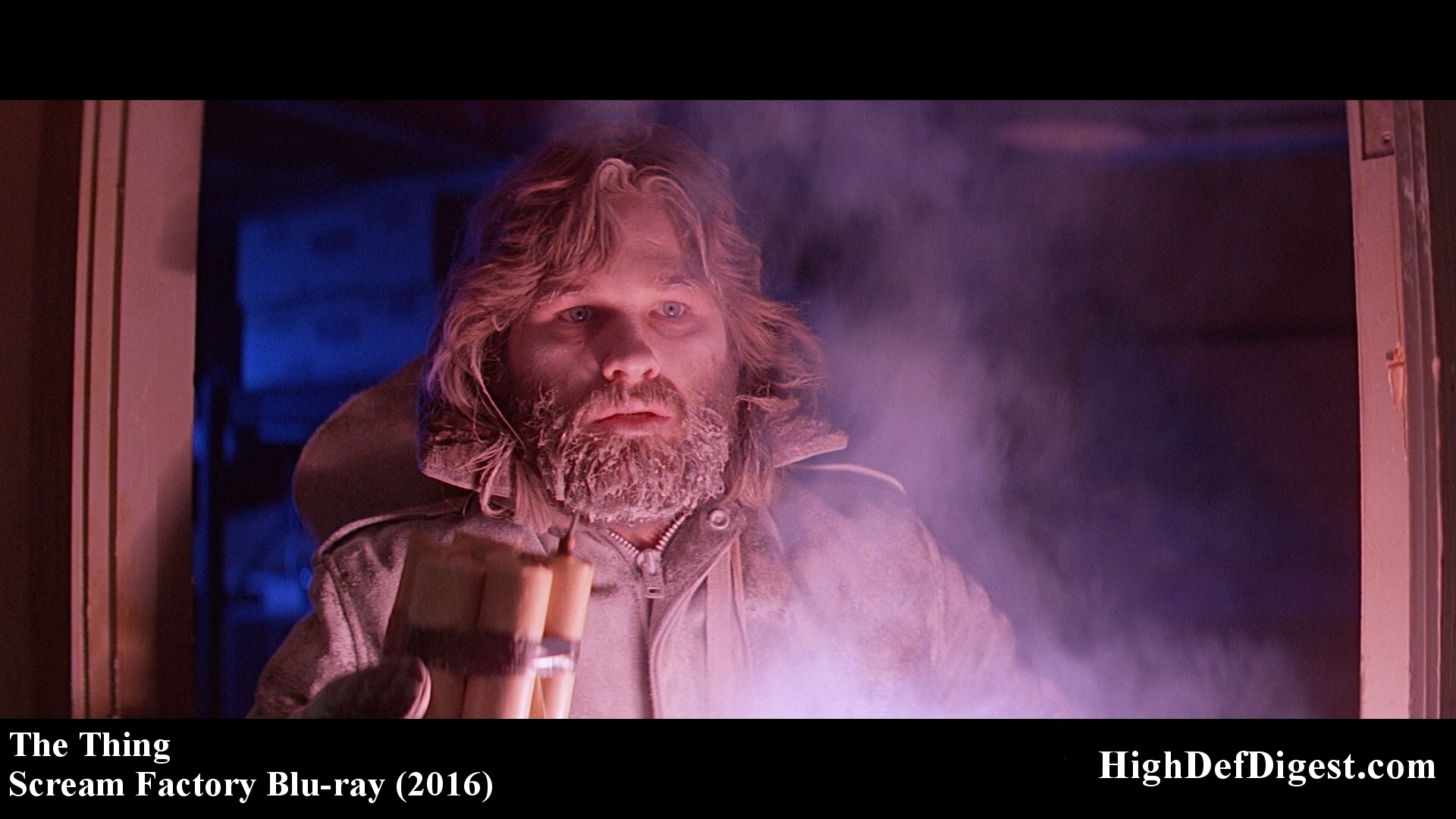 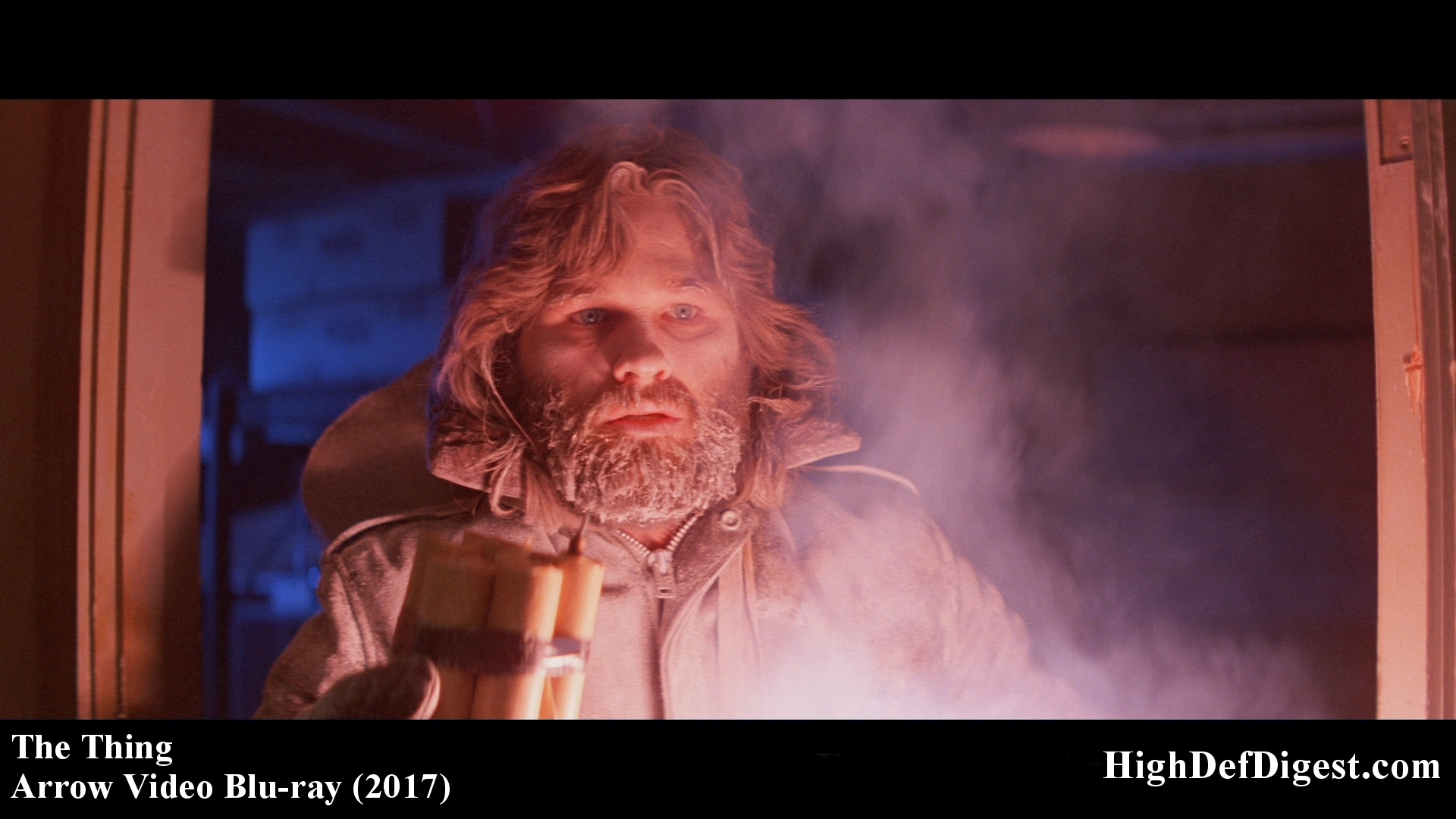 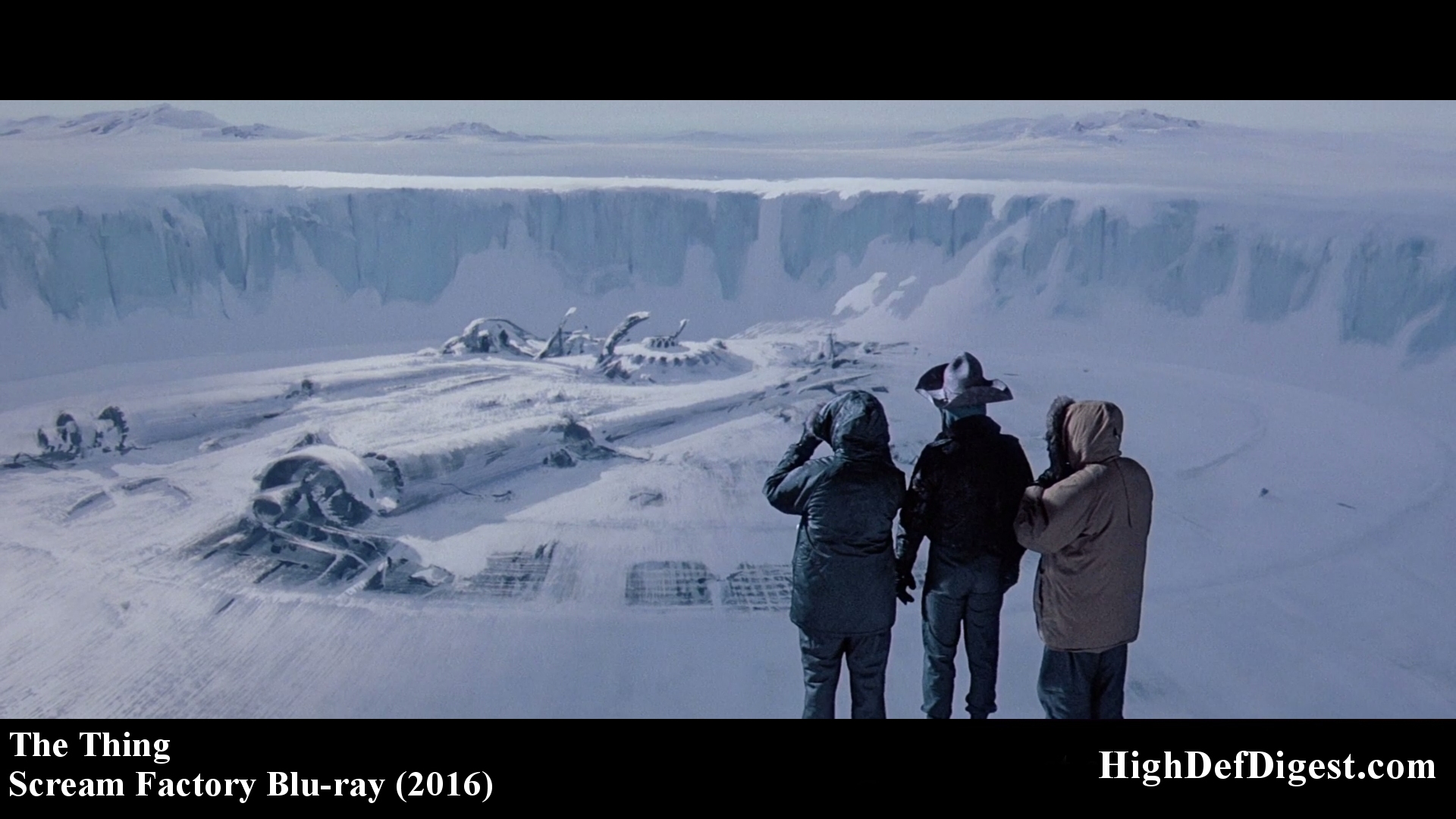 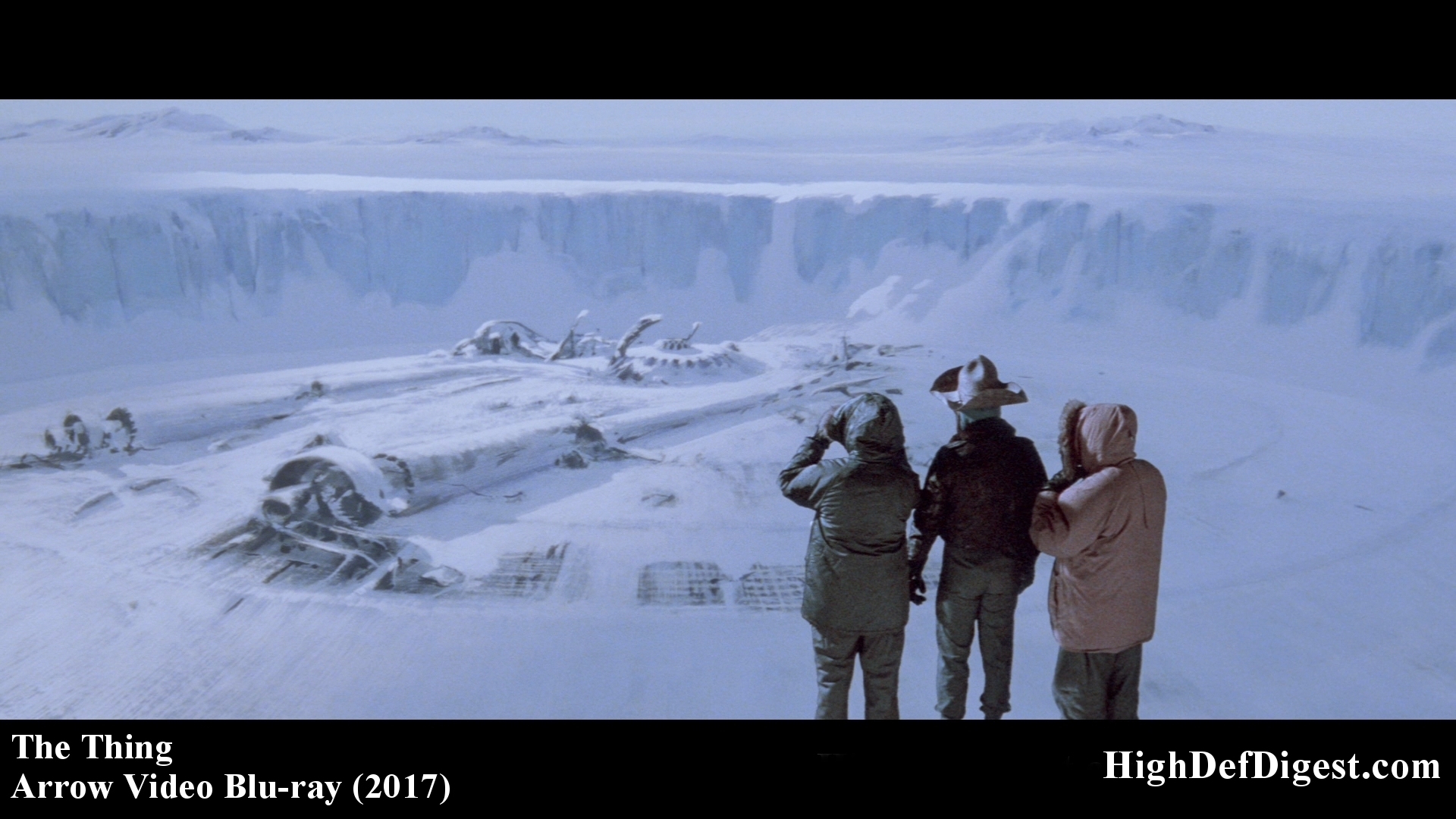 (It’s also worth noting that, despite both transfers claiming supervision and approval by Dean Cundey with barely a year between them, their color grading looks quite different. This really puts the legitimacy of the controversial ‘Halloween: 35th Anniversary Edition‘ Blu-ray into question. My honest feeling here is that every time the guy supervises a video transfer for one of his old movies, he grades it however he feels looks best at the time, without much concern for referencing how the film looked when he originally photographed it.)

Even having just watched the movie, I went out to Best Buy and picked up the Scream Factory Collector’s Edition this weekend. Comparing several scenes, it’s obvious that the Scream Factory Blu-ray has more genuine picture detail all throughout the movie in practically every shot. The difference between the discs looks like one is being projected in tight focus while the other is slightly out of focus. The tradeoff to this is that grain is also more prominent (and it’s a pretty grainy movie). Even so, the benefits outweigh the negatives, and the sharper, clearer image is a lot more appealing and satisfying in the majority of scenes.

Viewed on its own at regular playback speed (rather than obsessing over individual screencaps), the Arrow disc is watchable enough. Some scenes look better than others, but I was never taken out of the movie by lousy picture quality. If I didn’t have anything better to compare it against, I’d think it was perfectly adequate. Nevertheless, the softness is a disappointment when it’s clear that the original photography had a lot more detail available on the film elements that this transfer is simply not picking up or taking advantage of.

How can this be?! The Arrow disc has a 4k scan of the original negative! It has to look better, doesn’t it?

Some possible explanations: The 4k scanner used for this master may have been inferior to the 2k scanner used for Scream Factory’s master. Arrow may have applied Digital Noise Reduction to the transfer after scanning. Softening may have occurred during the downconversion from 4k to 1080p. Perhaps the video was overcompressed in order to squeeze several hours of high-def bonus features onto the same disc. Any or all of these could be responsible.

Whatever the cause, Arrow Video’s Limited Edition of ‘The Thing’ has failed to live up to its promise and hype. The main selling points of the disc are now its exclusive bonus features. Though the Scream Factory disc was no slouch in that area, Arrow has several different documentaries and featurettes. Die-hard fans with region-free capability will probably want to own both copies. Those just looking for the best a/v presentation should stick with Scream Factory’s offering, regardless of its 2k source. This is just another example of how obsessing over technical specs can so frequently lead to the wrong conclusion.

I plan to make the Scream Factory disc my default for viewing this movie going forward… Until somebody does an 8k scan, of course. Because that would have to be amazing, right?