If you love movies, and if you enjoyed the recently reviewed ‘Silhouettes‘ book by Olly Moss, you’ll definitely want to check out this other fun little collection of pop culture art by Scott Campbell. This particular book features Scott’s take on some of the most memorable confrontations in cinematic history.

Since studying illustration at San Francisco’s Academy of Art, Campbell’s insightful and humorous designs have been featured in a variety of comics, videogames, children’s books (such as the hugely popular ‘Zombie in Love‘ by Kelly DiPucchio) and even numerous art galleries around the globe. One of his most sought after series of artwork is ‘The Great Showdowns’, which features simplistic, almost childlike drawings of epic clashes from the movies. Lt. Ripley vs. the Alien Queen, Neo vs. Agent Smith, the Terminator vs. T-1000 and many others are all represented here in minimalist-style humor.

The coffee table book is a hardcover and features 144 pages. The size of the book is about 6.8 inches square, roughly the same size as ‘Silhouettes’. [Click any of the images shown below to enlarge.] 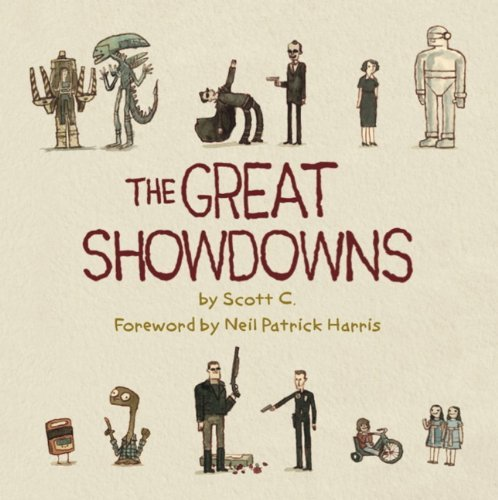 As with ‘Silhouettes’, ‘The Great Showdowns’ doesn’t have a whole lot of text. In fact, the only written words in the entire book are a brief intro by Scott C. and a foreword by one of Scott’s biggest fans, actor Neil Patrick Harris, who has been collecting Scott’s artwork for years and is even immortalized in one of the featured pieces riding a unicorn from the ‘Harold & Kumar’ films.

The rest of the book is composed of Scott’s wonderful imagery. Here are a few examples of what you will find inside this volume: 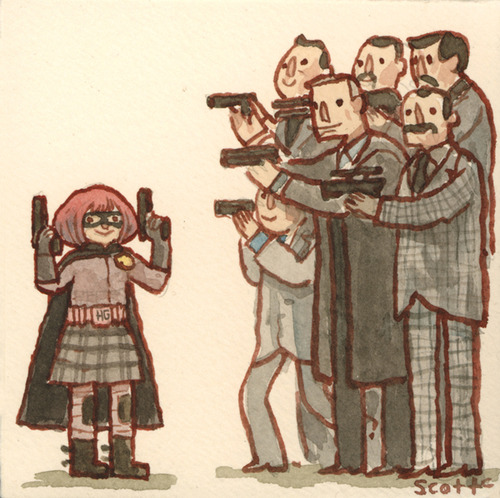 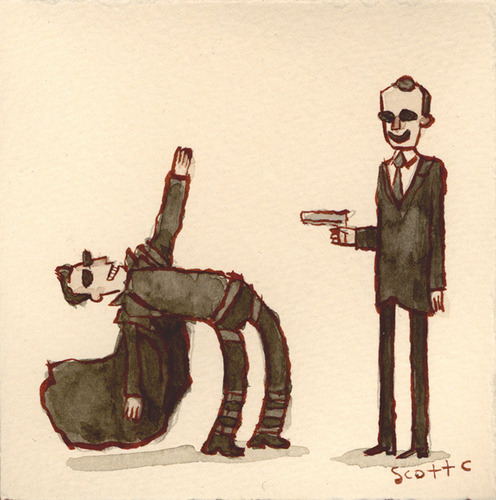 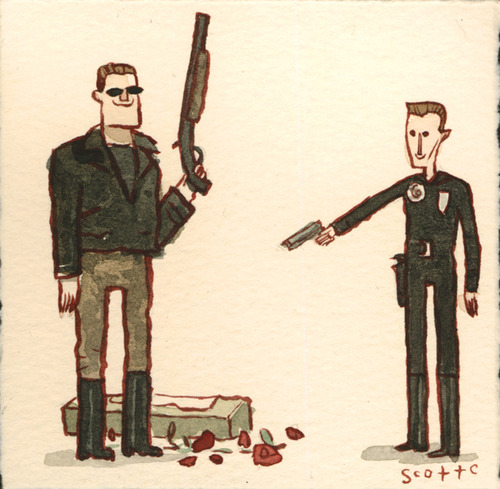 As you can see, the pictures are pretty simple. Despite their simplicity, however, most of these charming drawings are instantly recognizable. Looking through the book will likely bring a huge smile to your face. I know it did mine.

At a suggested list price of only $14.95, ‘The Great Showdowns’ comes highly recommended and would make a great unique gift for any film fan this holiday season. Due to its size, it also makes the perfect companion to ‘Silhouettes’ on any coffee table. Be sure to check it out.

The suggested list price for ‘The Great Showdowns’ is $14.95.