While many other studios have stopped releasing TV shows on Blu-ray at all, HBO has taken the bold step of reissuing the first two seasons of ‘Game of Thrones’ with newly remixed Dolby Atmos soundtracks and swanky SteelBook cases. The disc packaging, unfortunately, turns out to be a mix of some good ideas and some very bad ones.

First off, these aren’t just SteelBooks. Each case is enclosed in a plastic shell. While the shells are handsomely designed, they only open at the top and prying open the lids to get the SteelBooks out is kind of annoying. The shells are also very prone to showing off fingerprint smudges. 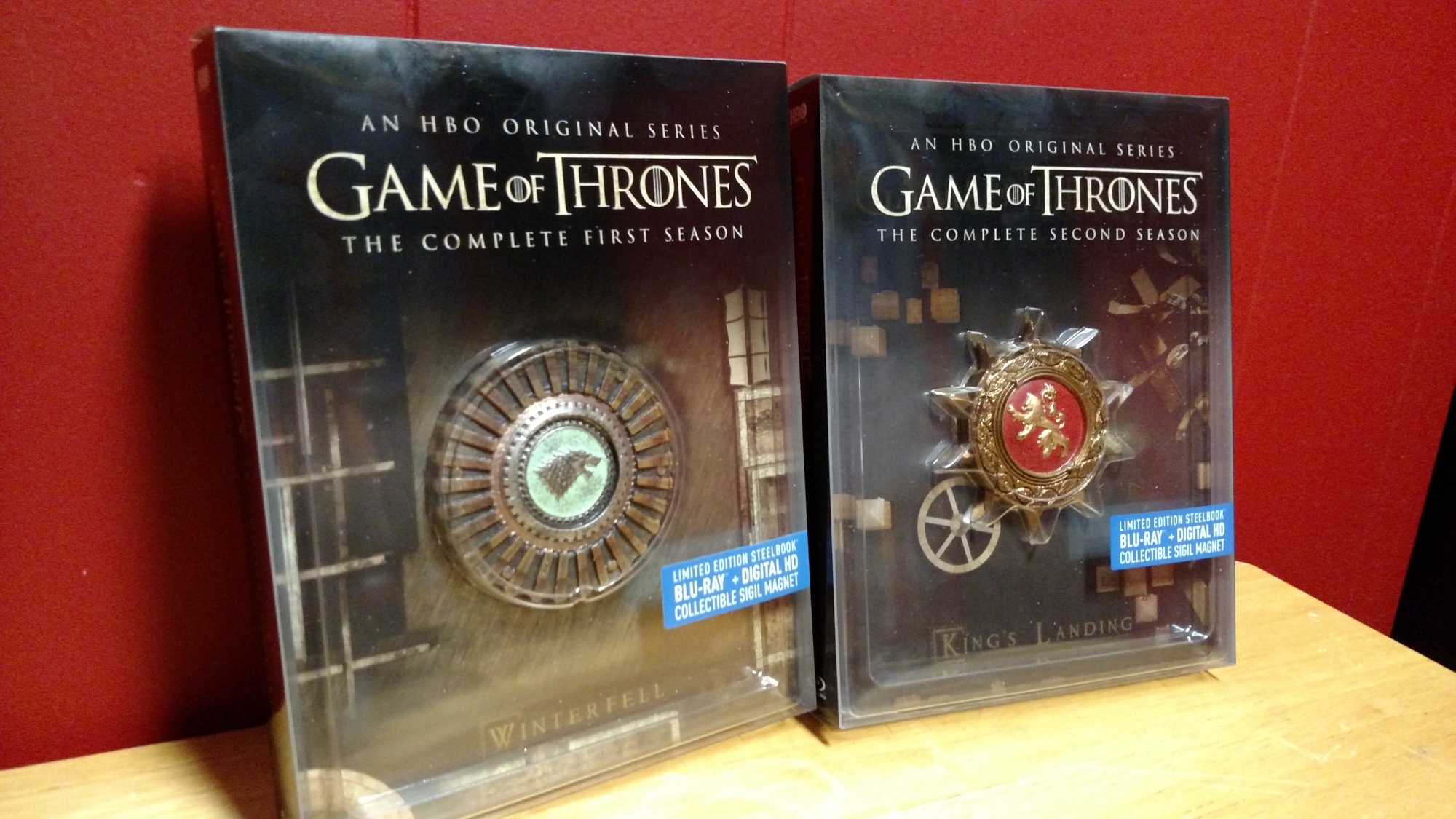 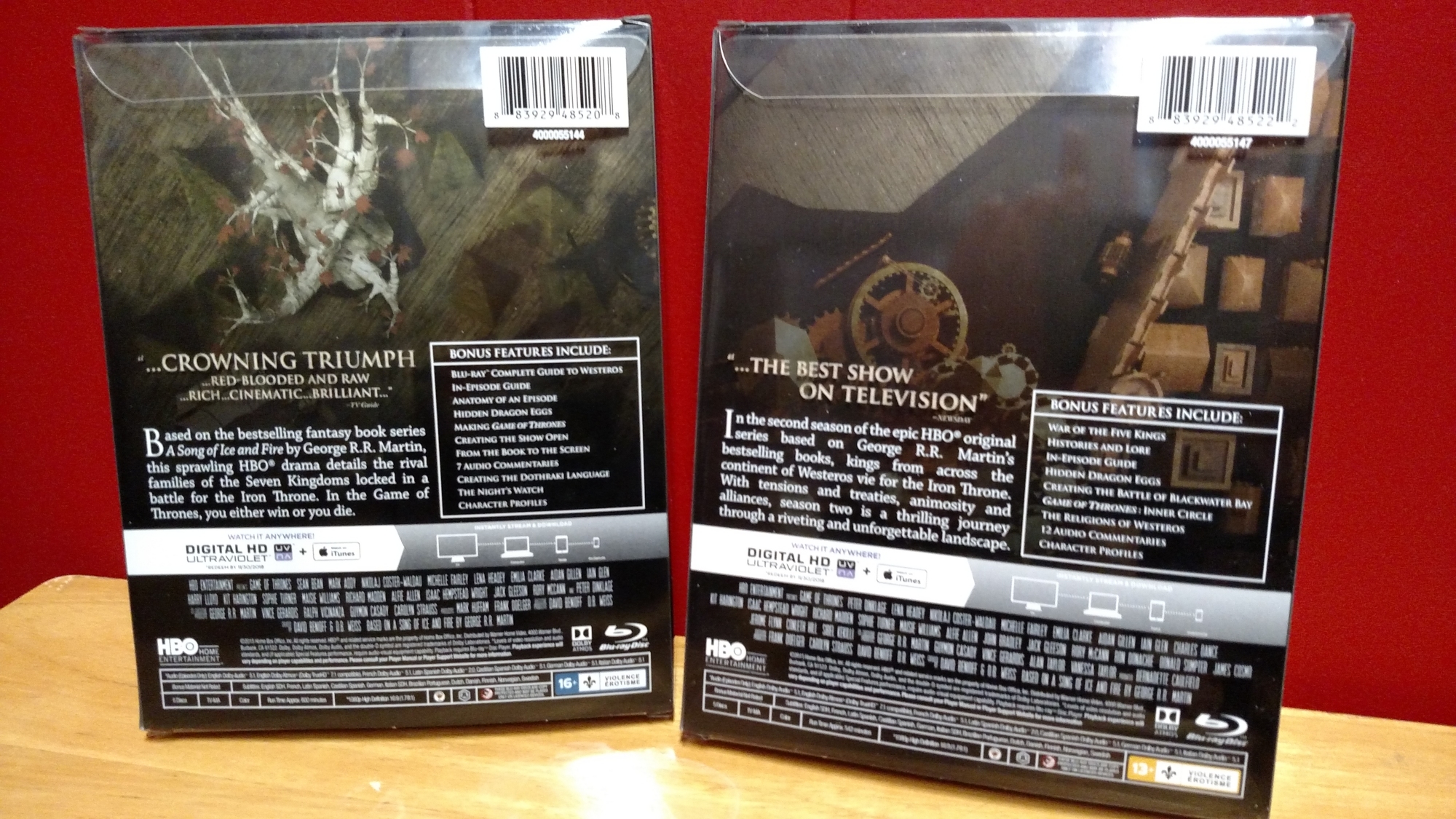 Once you slide the cases out, each still has a plastic tray resting on top of the front cover. This holds the “Collectible Sigil Magnet,” which is obviously based on iconography from the TV show. Each one represents the crest of a prominent family, Season 1 for the Starks and Season 2 for the Lannisters. 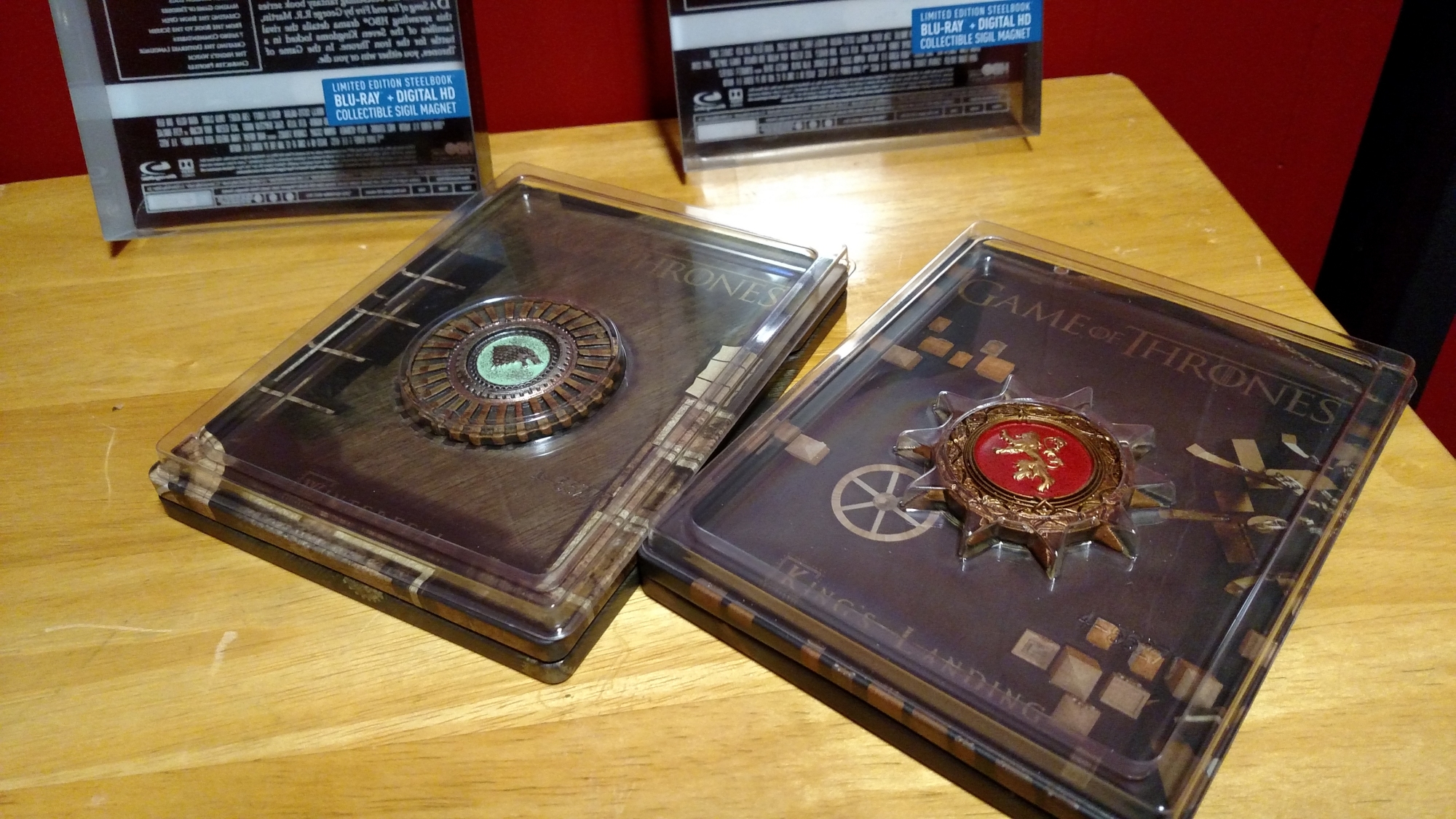 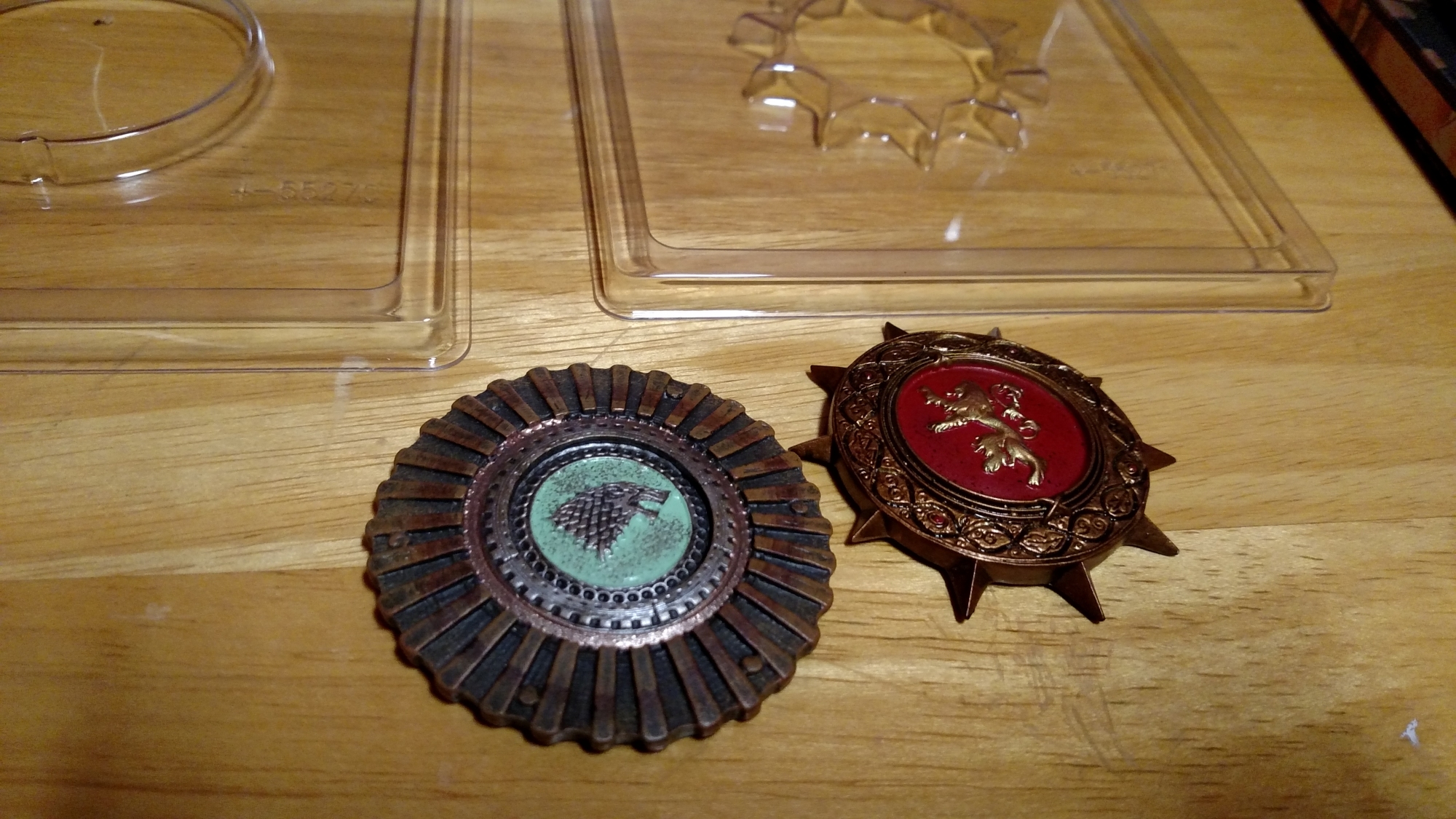 With the trays and magnets removed, the same imagery appears in the center of each front cover. The artwork on the cases was designed by Elastic, the agency that created the show’s opening credits sequences. It’s a clever idea and looks nice. 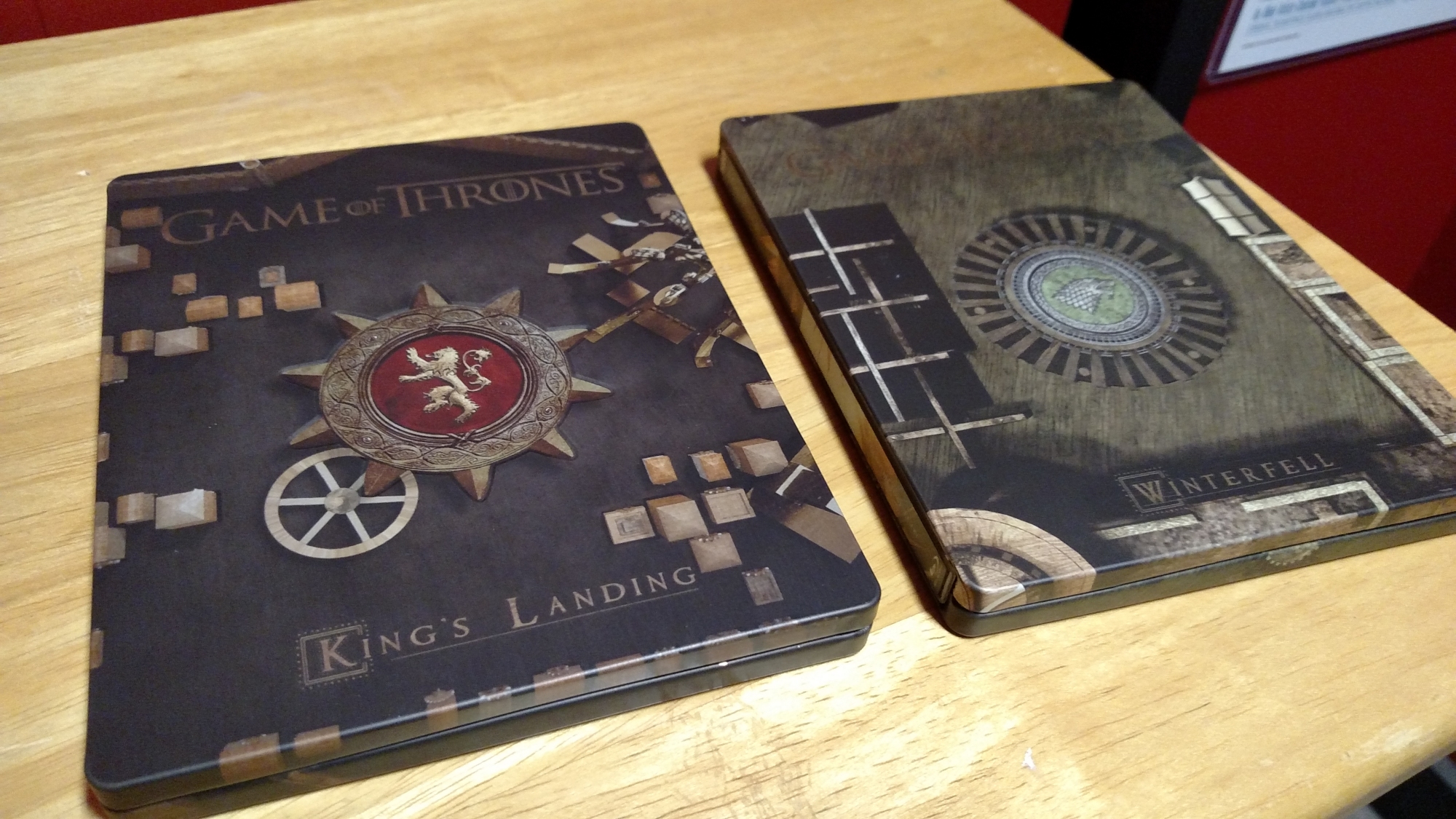 Where we get into trouble is after opening the SteelBooks. From the outside, you can tell that each case is a standard width used for SteelBooks that typically hold only one or two discs. Yet each season of the show comes with five Blu-ray discs worth of episodes. How do they all fit in there?

Sadly, the designers chose to stack the discs one on top of another onto just two hubs per case. Three discs are stacked on the left side and two on the right. 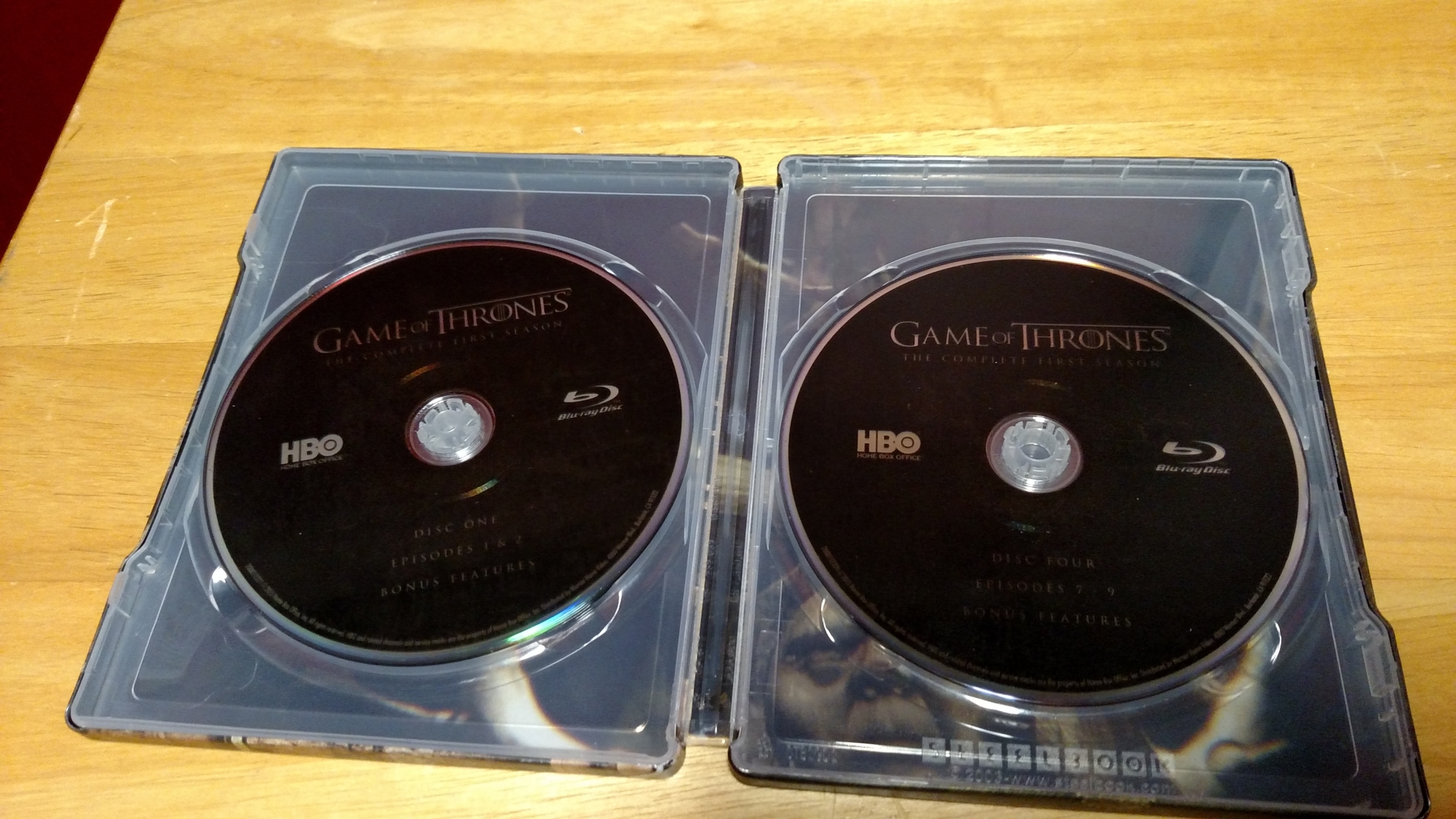 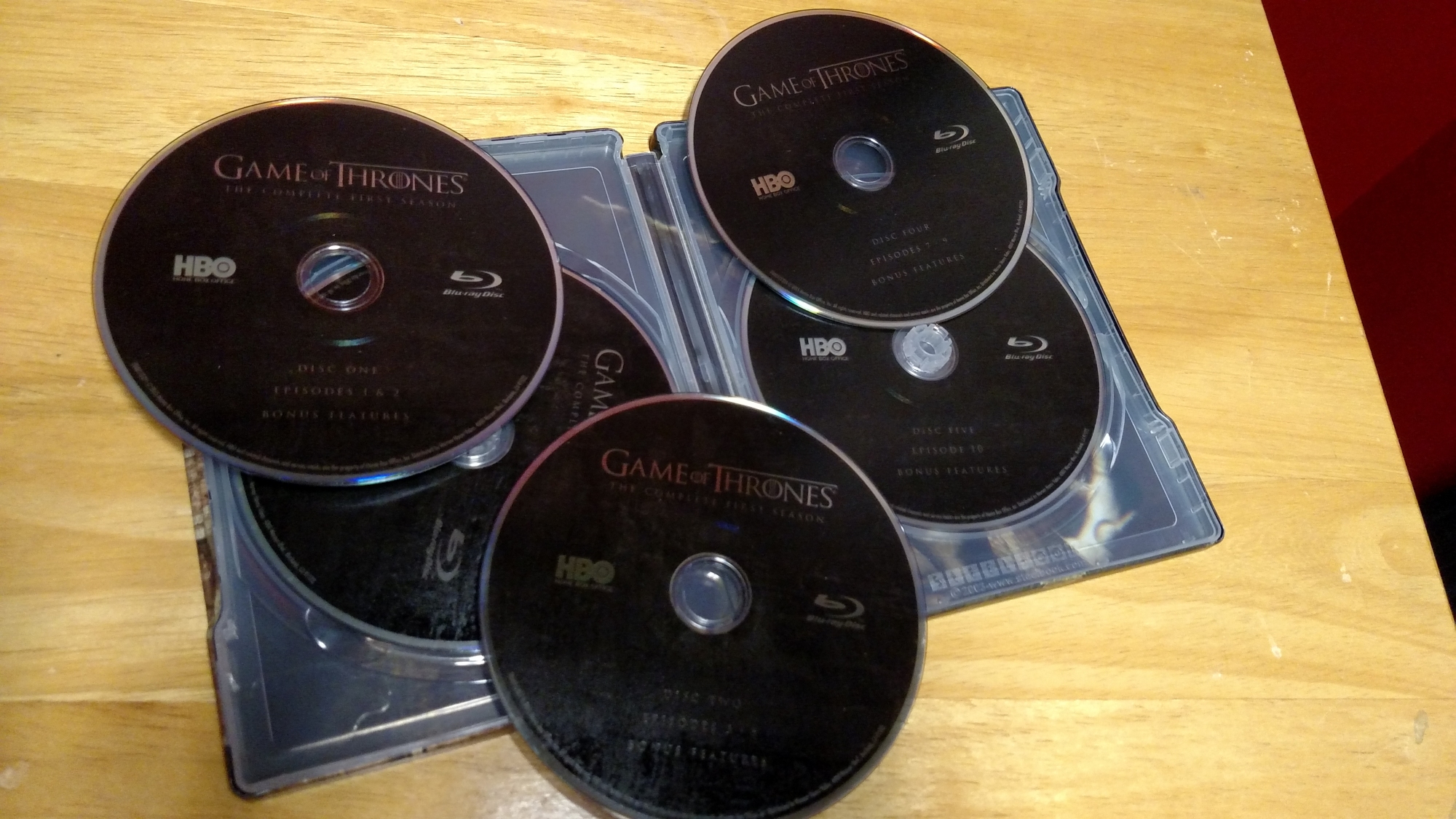 To be blunt, this is a terrible idea. The discs are extremely hard to pry off the hubs. I fear that I’ll snap them as I struggle to remove the discs. I’m also concerned about the bottom surface of each disc getting scratched while resting like this.

My immediate thought was to take most of the discs off the hubs and put them in paper sleeves. Unfortunately, the inside of the case is so tight that there’d be no room to store them that way. Inserting paper sleeves between the SteelBook and the outer plastic shell also looks pretty terrible. I have no choice but to either leave the discs on the hubs or take them completely out and store them somewhere else, which would of course defeat the purpose of this fancy packaging in the first place.

As an Atmos owner and someone who had never gotten around to purchasing the previous Blu-ray editions of ‘Game of Thrones’, I’m glad to have these new copies. However, I’m also very frustrated by the impractical design of the SteelBook cases. A little more thought and effort could have made this a much better product.