This year’s E3 (Electronic Entertainment Expo) conference will run from June 5th to 7th in Los Angeles. In anticipation of that, Nintendo decided to start the party early by introducing some key components of its first high-definition console. These include the redesigned Wii U Gamepad, Pro Controller and the Miiverse.

The Wii was a bit of a Swiss Army Knife with all sorts of control options. The new Wii U raises the stakes by not only supporting the WiiMote, Nunchuck and Wii Fitness board, but also by centering an interface around a new controller, called the Wii U Gamepad. The Gamepad retains all the features introduced last year, but with some notable redesigns and some new features that were revealed during Sunday’s pre-E3 press video.

First off, the Gamepad now has what appear to be industry-standard dual analog sticks that can be depressed as buttons. These sticks are matched with four shoulder buttons and some ergonomics that will hopefully make the Gamepad grip friendly. This should bring Nintendo more in line more with Sony’s and Microsoft’s control schemes.

This announcement was followed by the introduction of an NFC (near field communication) reader/writer to the left of the Wii U Gamepad’s touch screen. As described, the NFC Reader/Writer can “place cards or figures on this… data that can be read or written in your experience.” Considering the success of Activision’s Skylanders figures, and Nintendo’s history of playing cards, ecards and augment cards, the NFC Reader/Writer may wind up with some compelling uses. Nintendo also revealed some interesting universal remote functionality. The TV button on the Gamepad can be pressed to turn the Gamepad into “a fully independent infrared TV remote.” 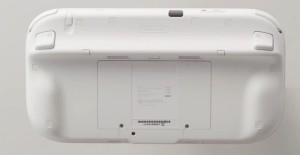 The Wii U and Dual Screens

The press video goes on to show some of the ways that Nintendo sees the combination of Gamepad screen and TV being used in future games. The Wii U has dual-screen potential, just like the Nintendo DS or 3DS. However, with the Wii U, the screen position is not fixed and is therefore subject to changing dynamics. This was illustrated by placing the Gamepad on the floor. The Gamepad displayed a golf ball and tee, and allowed the player to tee off using a Wiimote while looking at both the Gamepad and TV screen. The touch screen was also used to send ninja stars towards the TV screen.

The video hints at “improved hardware specs” for Nintendo’s new device, but no specifics were revealed. Hopefully, more information will come later this week.

Nintendo then harped on the Wii U’s ability to function without a TV. This included an allusion to HD graphics on the Gamepad’s screen, but again no specifics.

The Wii U Pro Controller

Mentioned briefly, the Wii U is claimed to support “all previous forms of control, but also will support the new Wii U Pro Controller.” The “all previous forms” part is further detailed as being the Wiimote, Nunchuck and the Balance Board. As the internet begins to froth over similarities between the design and look of the Wii U Pro Controller and the Xbox 360 controller, it’s important to note that the Pro Controller was specified as a “separate peripheral.” To me, that means it will not be bundled with the system, and will therefore be lacking for support. The Wii’s Classic Controller, classic Controller Pro and 3DS Circle Pad Pro all come to mind. 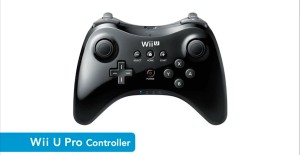 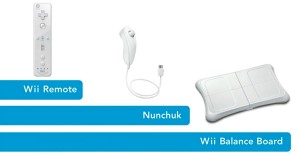 Wii vs Wii U

The video attempts to clarify how Nintendo wants the public to perceive the Wii U and its function in the home. Ultimately, stating that the Wii U is “both a simple evolution of the Wii and something different and new” is another way of saying that it will be, “Everything you enjoy about the Wii, plus new capabilities that we hope will remove what you didn’t love about the Wii.” I have to say that this explanation is very well reasoned, even if the public sees the Wii U (and to some extent the 3DS) as unwanted sequels. It does what Wii did, only better, plus it can do more.

The Miiverse – Because the Internet Does Exist

Fearing that words and graphics could not adequately explain what the Miiverse is, the video presents a fictional Miiverse experience.

The example features an idiot who can’t get past a zombie and is forced to turn to the Wii U’s social networking interface for help. First, he posts a cry for help using the Gamepad. The touch screen facilitates typing, while allowing for some drawing as well. This leads to a phone call from his friend/enemy, who had read the post off of a cell phone. This sequence is followed by a Wii U video call with some older gentleman. Despite the painful way that Nintendo decided to introduce these features, they seem promising, more useful than just having Miis around. Thankfully, there’s no hint of Friend Codes. Oddly absent, however, is anything comparable to the Xbox 360’s in-game voice chat, which might have alleviated the need for a cell phone. 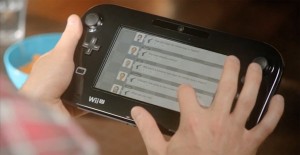 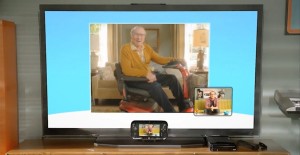 The Miiverse and the Homescreen

The video goes on to show how these Miiverse features will be a part of the Wii U from the moment it’s turned on. Miis from the player’s console, friend list and same language region occupy the new home screen, complete with little messages and drawings. Some Miiverse details include ubiquitous availability. In other words, the player will not have to exit a game to access Miiverse features. In fact, they may be further integrated into game designs as in “The New Super Mario Bros.” example. The Miiverse is expected to expand to the 3DS with interfaces available on PC and other bits of mobile technology, such as smartphones.

One funny thing mentioned about having Miiverse social messages is a desire to regulate out spoilers. One point made was that the Wii U Gamepad’s screen is a social window, with the touchscreen being more integrated than many other living room devices. The Gamepad is also being pitched as device that allows for internet browsing, and entertaining presentations on TV of that internet experience. This feature seems basic with its childish curtains and Power Point-esque similarities, but Nintendo wants you to browse the internet with your family and friends in a fun manner. 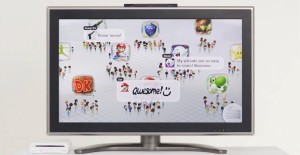 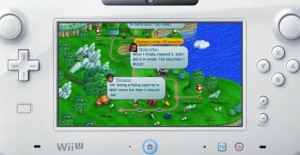 While the basic and debatably useful/useless nature of the Miiverse is a concern, an even bigger issue is the potential performance cost to any games on the Wii U. Developing for the Wii, with its 64 MB of RAM, made supporting something as simple as the Home Screen a constant concern. The Wii U’s various camera, IR ports and other running peripherals could be problematic. Further, the need to pause mid-game and store the entire experience while the player makes a video call is even more troublesome. Hopefully, the specs will make this less of a struggle than aspects of the Wii have been. Really, I wish that console makers would have RAM and a fixed save space for all these features that’s separate from the developer memory.

Here is the video in its entirety: