I recently went to a lot of trouble getting the best bass response from one subwoofer. In theory, adding a second subwoofer could improve my results even further. Not the way I did it, unfortunately.

As I recounted in previous posts, I found the Room EQ Wizard software to be an invaluable tool for seeing exactly what’s going on with the acoustics in my room. After changing the SVS SB-4000 subwoofer’s placement in my home theater and adjusting its phase setting, I was able to obtain a pretty good frequency response that’s fairly flat between 20 Hz to 100 Hz.

I probably should just be happy with this, but since I still have my SB-2000 subwoofer available, I thought it would be worth a shot to at least try a dual-subwoofer setup.

The core ideas behind running two subwoofers are: 1) They should be identical or at least equivalent in performance to each other, and 2) You should place them on direct opposite sides of the room from one another. (If one is in the center of your front wall, the second should be in the center of the back wall; if one is in a corner, the other should be in the opposite diagonal corner.) I was not actually able to meet ether of these criteria. Still, I pushed forward anyway.

The SB-4000 and SB-2000 are not quite equivalent in power specs, but their bass extension is rated the same down to 19 Hz and I’m not using anywhere near the limit of either sub’s amp power, so I didn’t consider that much of a concern. More of an issue is room placement. The opposite-walls theory is based on having a standard rectangular room, preferably with no furniture at all. My home theater is not a perfect rectangle, due to having an alcove on the right side in the front. Additionally, needing to keep the office area in the back means I have nowhere to put a subwoofer there. The only practical place to put the second subwoofer is directly behind my seats in the center of the room. 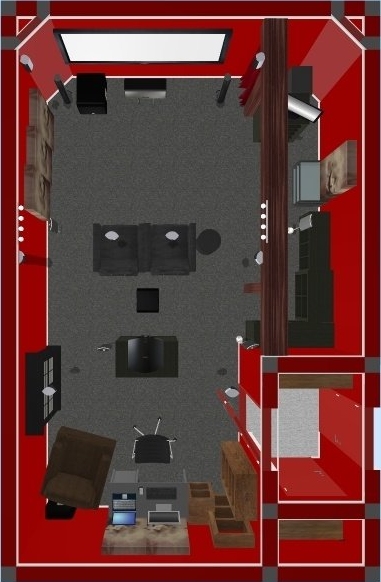 This is problematic both for not being directly opposite the first sub, and also because the center of the home theater is a room mode with a bass null. However, there is a theory that putting a subwoofer right in the middle of a mode can cancel the null. Hoping that was true, I hooked up both subs, re-ran Audyssey, and took some new measurements.

Wisely, the very first thing I did was save a copy of my existing settings and Audyssey calibration to a USB drive so that I could easily re-load it later. It was definitely a relief to have that at the end of all this.

For the first measurement, I left the SB-4000’s phase setting where I had it previously at 90 degrees. The SB-2000 started at its default of 0 degrees. In all of the following graphs, the red trace is the baseline for comparison, representing my original results from having a single subwoofer, while the other colors are each dual-subwoofer measurement.

Right away, this looks bad. The frequency response takes a small dip around 22 Hz and then hits a steep decline between 60-90 Hz. The two subs must be canceling each other out at those frequencies. Using two subwoofers like this was clearly worse than just using a single subwoofer.

I next played around with the phase settings on both subwoofers in various permutations and took numerous measurements. I won’t post them all here but from these examples you can see that some were a little better than the first measurement and some were even worse. The worst result was with both subwoofers at 180 degrees phase. Bass at 70 Hz drops off a cliff in that one.

The best result I got with two subwoofers was setting both for 0 degrees, which came reasonably close to the original measurement of just the SB-4000 alone at 90-degrees. Even so, there’s still a small dip at 22 Hz and this doesn’t look any better than just using a single subwoofer, so what’s the point of doing it this way?

Ultimately, I disconnected the SB-2000 and re-loaded my original Audyssey calibration for just the one subwoofer. In this instance, running two subwoofers had worse results than using just one.

I’m not saying that having a dual-subwoofer setup is never a good idea. In many rooms, with proper placement, it may indeed prove beneficial. If I have the time and the opportunity, I may try this again with the SB-2000 in another part of the room.

In the meantime, I hope this proves once again that finding the right spot in your room to place a subwoofer is the most important decision you can make, and will have a huge impact on your bass results, even when you double up the subwoofers.