Dolby’s groundbreaking Atmos surround sound format is coming to Blu-ray and home theater later this year. Will the home version really be as good as what we hear in cinemas, or will it be watered down for mass market CE consumption? To answer that question, Dolby invited myself and some other home theater journalists to its New York headquarters to listen for ourselves.

First off, I can confirm that home Atmos works and it sounds pretty great. The Dolby reps showed us four Atmos trailers and one movie clip. At least two of the trailers (called ‘Amaze’ and ‘Unfold’) you may have seen if you’ve been to an Atmos theater. For reference, here are the web-friendly versions reduced to underwhelming YouTube quality audio:

The third was called ‘Leaf’, featuring animation by Pixar with sound design by the great Gary Rydstrom. The last trailer was a Red Bull Media ad involving a Formula 1 race car. The movie clip was the opening scene from ‘Star Trek into Darkness‘. We were instructed to be very clear that Paramount provided the ‘Star Trek’ clip for testing and demo purposes only, and this should not be taken as confirmation that ‘Star Trek into Darkness’ will be released on Blu-ray with an Atmos soundtrack. Dolby and its studio partners are not ready to announce specific Blu-ray titles yet.

We watched all of these presentations twice, once in the office’s main screening room that played the Atmos cinema mixes, and then again later in a smaller home theater demo room where we heard the home versions played back through (upcoming) consumer speakers. I’ll be honest; I actually found the cinema screening room a little underwhelming. The sound quality at Dolby’s San Francisco office is much better than the New York office. Although directionality from multiple overhead speakers was good, the audio sounded very bright and flat. This was not a great showcase for Atmos. I’ve heard Atmos sound better than this.

In fact, if anything, the home theater demo had superior sound quality. Some of that may have been due to room characteristics. The home theater room was much smaller than the cinema room, with speakers closer to the listening position, and the Atmos track was rendered for near-field viewing. The room didn’t have nearly as many speakers, and the bass wasn’t quite as powerful, but overall fidelity was superior.

The home theater room was set up in a 7.1.4 configuration. That’s seven speakers on stands at ear level, one subwoofer, and four overhead speakers on the ceiling. The sense of immersiveness and directionality from all the clips we viewed was terrific, with plenty of discrete sounds moving around above our heads.

Next we heard a couple of audio-only demos: a helicopter circling the room and a rainstorm. We listened to these in three variations. First was a standard 7.1 down-render with no Atmos. Next was Atmos utilizing all the speakers in the room (including overheads). Finally was Atmos with the overhead speakers turned off, but Atmos modules on four of the ground speakers firing upwards to bounce sounds off the ceiling. That last one is for people who want Atmos at home but can’t mount speakers above their heads.

Obviously, both versions of Atmos were superior to the basic 7.1, which restricted the helicopter and rain sounds to ground level with a big gaping hole in the soundstage above the listening position. The Atmos mixes were much more convincing and realistic. However, I think this was a little unfair. Most people who install 5.1 or 7.1 surround sound already place their side and rear surround speakers either on the ceiling or high on the walls, not on stands at ear level. I would have liked a comparison to a 9.1 or 11.1 configuration utilizing front height speakers, high surrounds (no ground level), and ProLogic IIz without Atmos (or to DTS Neo:X, but I certainly didn’t expect Dolby to demonstrate a competitor’s product).

Regardless, the Atmos demos were very impressive. I felt that the version using discrete ceiling speakers sounded best, but the upward-firing ground speakers were no slouch either and were a pretty convincing substitute. Depending on your own room characteristics (super-tall cathedral ceilings may pose a significant challenge), most viewers in average-sized rooms should find that option quite satisfying.

The home theater version of Atmos is ready to go, it works as advertised, and HT fans who upgrade to it will no doubt be very pleased with the results.

Before, between and after the demos, we were given the chance to ask questions to several Dolby reps. The main speakers were Craig Eggers (Director of Content Creation and Playback, Home Theater Ecosystem), Brett Crockett (Senior Director, Sound Technology Research), and Joshua Gershman (Public Relations Manager). The following are not direct quotes, and I don’t remember who said what, but this is some of the information I gleaned from the interactions.

What Exactly Will I Need to Upgrade to Atmos?

Won’t I Need a New Blu-ray Player Too?

Most likely not. Any Blu-ray player capable of transmitting a Dolby TrueHD soundtrack in Bitstream format will be compatible with Atmos. Unfortunately, this will rule out first-generation players and the original “fat” PS3, but the PS3 Slim and any standalone model made since mid-2007 or so should be good to go.

Note that you must set the player for Bitstream transmission via HDMI and turn off Secondary Audio.

Do I Need to Buy Special Atmos Speakers or Can I Keep My Current Speakers? 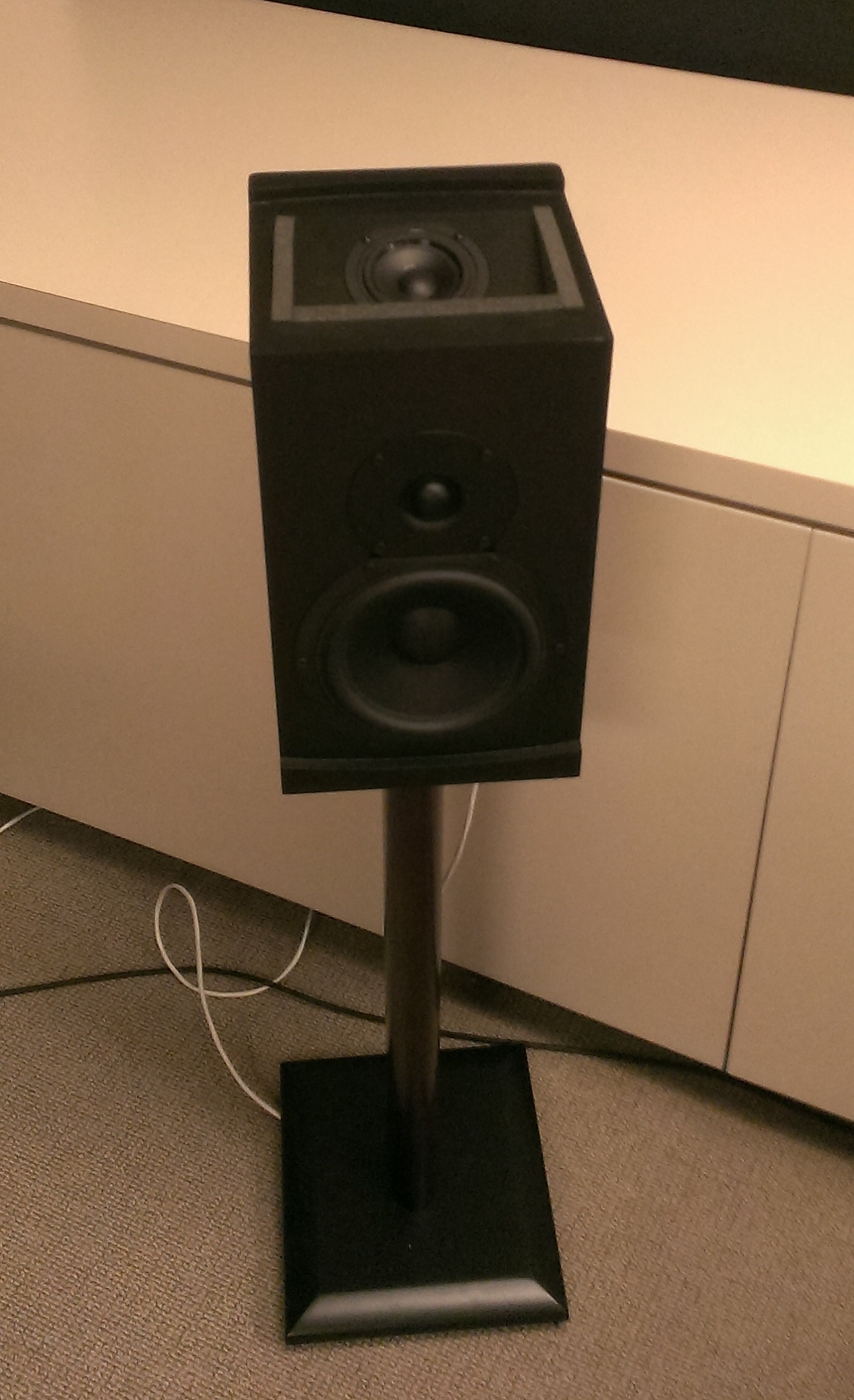 If you plan to use the version of Atmos that fires sounds upwards from ground level to bounce off the ceiling, you will need specific Atmos-enabled speakers. You cannot simply take some old bookshelf speakers and aim them towards the ceiling, for example. The Atmos modules in the speakers need to shape the sound frequency so that it bounces correctly.

Some manufactures will offer add-on modules that can be placed on top of (or next to, on stands) your current floor-standing speakers.

Whether you buy Atmos-enabled mains or add-on modules, the upward-firing portion is technically considered its own speaker and will require a separate run of speaker wire from your receiver/amp.

If you plan to use only direct-firing speakers, with discrete speakers installed in the ceiling, you do not need special Atmos speakers. Your existing mains and surround speakers will work fine. You’ll just need more of them.

Dolby recommends that all of your speakers be timbre matched, so mixing and matching different brands is probably not a good idea. Ideally, you should use identical full-range speakers at all locations, but installing full-range speakers on the ceiling seems impractical to me. I expect that most people will use small surround speakers and bass management for all the height channels.

When Will Home Atmos Be Available?

Atmos titles on Blu-ray are coming, but specific titles and release dates are not ready to be announced yet. Additionally, some streaming platforms (again, not yet announced) will support Atmos via the lossy Dolby Digital Plus codec.

How Do I Calibrate for Atmos?

The Atmos decoder will piggyback off of the receiver’s built-in automatic calibration tools (such as Audyssey, YPAO or MCACC). The calibration may take longer with more speakers, but fortunately you should only need to calibrate once for all formats, Atmos or otherwise.

Can I Watch an Atmos Blu-ray If I Don’t Have Atmos Equipment?

Yes. Atmos will be encoded on Blu-ray in Dolby TrueHD format as a 7.1 base with additional metadata for the Atmos extensions. If you don’t have an Atmos processor, your receiver will still be able to decode in standard 5.1 or 7.1 formats.

Don’t worry, you won’t lose any sound effects when you do this. All the sounds will be folded down to the 5.1 or 7.1 base and redirected to your current speakers.

The primary soundtrack on an Atmos Blu-ray is the Atmos soundtrack. The 7.1 base is a fold-down from Atmos, and may contain differences from a dedicated 7.1 mix. According to Dolby, some Hollywood sound designers were initially concerned about this, but ultimately found that the results were as good or better than dedicated 5.1 or 7.1 mixes. Of course, this is Dolby’s spin on it, so you may have to take that with a grain of salt.

As with a normal TrueHD disc, an Atmos Blu-ray will also contain a companion (lossy) Dolby Digital 5.1 track for backwards compatibility purposes. Discs may also include additional sound options (such as foreign language dubs) at the discretion of the studio. Theoretically, a disc could feature both an Atmos track and a separate TrueHD 5.1 or 7.1 dedicated mix if the studio desires and the disc has enough space available.

Can a Normal Blu-ray Be Upmixed to Atmos?

Yes. The Atmos processor can take a standard 5.1 or 7.1 soundtrack and upmix it to the additional speakers you have installed. This will probably not sound as good as a true Atmos mix, of course.

The Atmos processor uses brand new algorithms to do this, which are not the same as the various varities of ProLogic II you may be using now to upmix stereo to 5.1 (or 5.1 to higher speaker counts). Dolby claims that the Atmos upmixing is superior to ProLogic II upmixing. Again, you may want to take that with a grain of salt until someone has the chance to do a lot of direct comparisons.

[Note: Additional questions about Atmos are addressed in this follow-up post.]