We home theater enthusiasts have a tendency to be obsessive tinkerers, constantly upgrading our equipment, recalibrating and adding new devices to eke just a smidge better performance out of our audio and video gear. Over the years, many companies have attempted to capitalize on this by marketing (typically expensive) gizmos and doodads that claim almost magical abilities to solve problems we may not have even known that we had. My first instinct is to approach such things with inherent skepticism. Recently, a company by the name of Darbee Visual Presence entered the fray with a device called the DarbeeVision Darblet, which is said to instantly and decidedly improve the image quality of any video source on a high-definition display. What’s more, the Darblet is very simple to install and use, and isn’t terribly expensive. Could this be the real deal? I decided to try one and find out.

The DarbeeVision Darblet is an in-line video processor with one HDMI input and one HDMI output. It’s a small device that measures just five inches long and has a stangely-styled translucent case. The input and output are located on the right and left sides of the unit respectively, which may make placement in a signal chain needlessly awkward. (Putting the HDMI connections on the back panel, like almost every other piece of home theater gear, would have made more sense.) The Darblet comes with a power cord and a credit card-sized remote control, but no HDMI cables. You’ll have to supply those yourself.

Aside from the questionable design issues, installation is exceedingly simple. Plug your video source into the HDMI input, and connect the HDMI output to your HDTV or display, then turn it on with the remote. That’s all there is to it. The company recommends that this be the last item in your signal chain prior to the display. If you currently switch multiple video sources through an A/V receiver, for example, you’ll want to connect the receiver’s output to the Darblet, and the Darblet to your TV or projector.

Out of the box, the unit comes programmed with some annoying functions, such as automatically displaying a Darbee logo in the corner of the video screen. You can turn this off in the setup menu. It’s also set by default to 100% strength, which you’ll want to reduce immediately.

The remote has eight intuitive buttons. “On/Off” and “Menu” are self-explanatory. “Up” and “Down” are also labeled as “More Darbee” and “Less Darbee,” because they increase or decrease the processing strength. Finally, there are four pre-programmed video modes: Hi Def, Gaming, Full Pop and Demo. The latter enables side-by-side comparisons.

The Darblet can accept and process any video resolution up to 1080p, including 3D.

According to the literature available on the company’s web site, the Darblet will “embed real depth cues in digital images, causing enhanced perception of object shape and ultra clarity.” That’s a fancy way of saying that it adjusts the contrast, luminance and chrominance in a video signal to make the image appear sharper and more detailed.

As I said earlier, I’m inherently skeptical of most home theater tweaks. Many of these – such as the obscenely-priced power cords and cables, or resonance-absorbing stones sold to self-proclaimed “audiophiles” – are pure snake oil, and can actually make our video and audio quality worse, if they do anything at all (which they usually don’t). We’ve seen what happens when home video studios attempt to digitally manipulate Blu-ray transfers to clean them up with Digital Noise Reduction or sharpen them with Edge Enhancement, and the results are rarely pretty. The detail and contrast boosting features available in most modern HDTVs and projectors (or external video processors) may seem to superficially improve one aspect of picture quality, but always at the expense of adding harmful and unwanted artifacts elsewhere. I make sure to turn all these functions off in my equipment. So, why would I want to add a new device that does some variation on the same concept?

In most cases, I wouldn’t. However, the wave of rave reviews for the Darblet from early adopters caught my attention. I was curious to find out if there was actually something to the hype for this device. 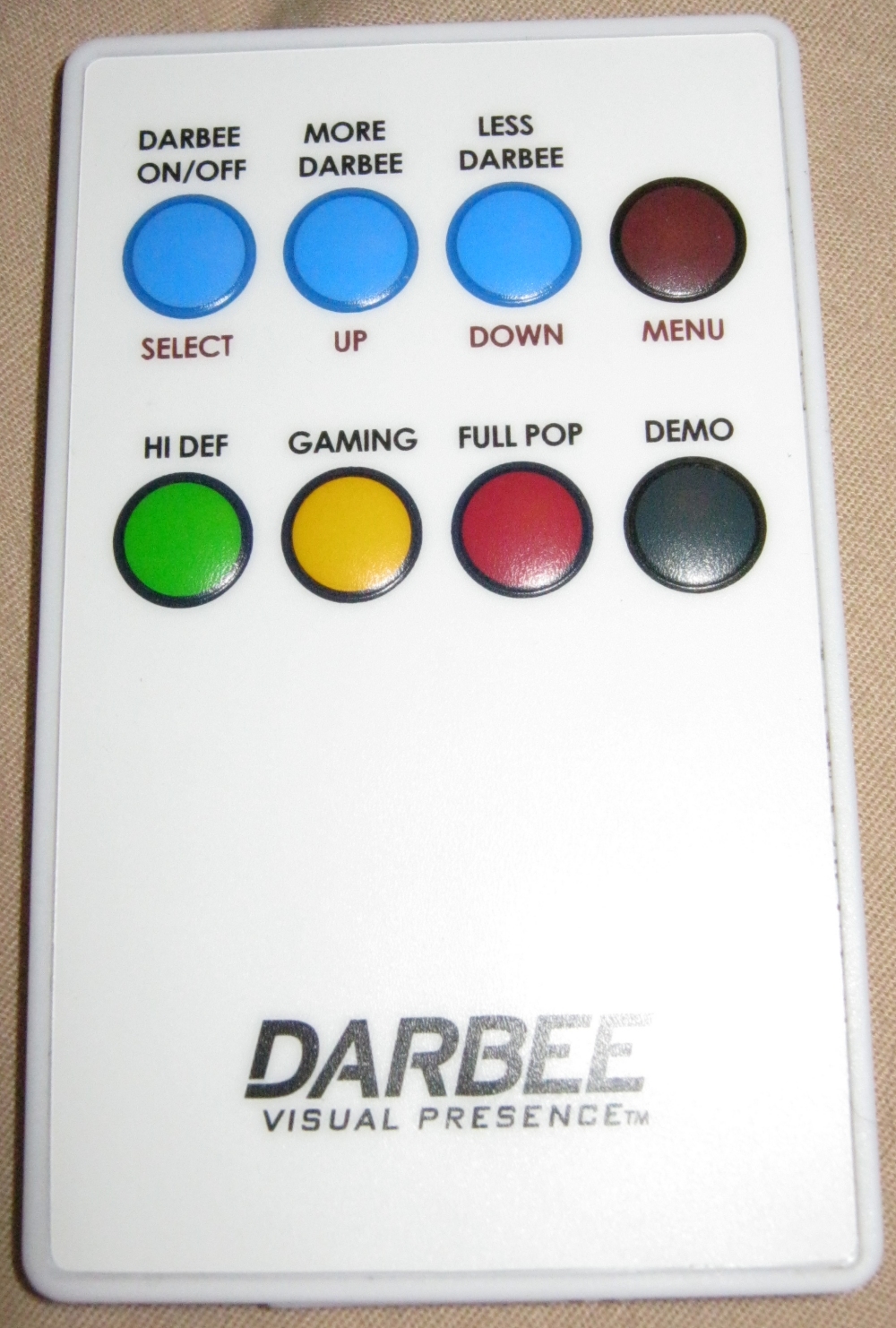 I’ll be honest. Upon first installing the Darblet, I had mixed feelings. A lot of that has to do with the fact that the unit is programmed for the 100% setting out of the box. (Oddly, all of the modes go up to 120%.) While this certainly made the picture on my screen (I currently use a JVC DLA-RS40 D-ILA projector) look sharper, it also gave the image a very “processed” and artificial appearance. This was consistent with most of the before-and-after comparison images on the Darbee web site, which must have been created at high strength settings. I didn’t care much for it at first.

With that said, after finding the right compromise and settling in with the Darblet for a few weeks, I have to say that I’m now a believer. What works for me is the “Hi Def” mode at 45%. (Different equipment may result in different optimal settings.) Depending on the quality of the input signal, I could probably go a little higher than that on some content, but the higher settings are usually too aggressive and harsh-looking, and the “Gaming” and “Full Pop” modes crush some shadow detail. I’ve found that Hi Def 45% is a sweet spot that works for everything.

What’s so good about it? Basically, turning on the Darblet has the effect of lifting a veil from the image and resolving all the fine details better. The Darblet cannot add detail that isn’t present in the source. A soft (or, sadly, DNR’ed) picture will still look soft if that’s its inherent nature. What the Darblet does is make the detail that is there slightly clearer and more distinct. The more high-frequency detail available in the source, the better the results. The picture seems to snap into focus when the Darblet is on, and slip slightly out of focus when it’s off.

Yet, at the right setting, the image doesn’t look unnatural or processed, or have any unwanted artifacts like edge ringing, noise or contrast clipping. It works equally well with color footage, black & white, 2D or 3D – both in paused still frames and in motion. On images with grainy photography, the film grain appears slightly crisper, but not excessively noisy.

To see how the Darblet really works, I ran it through a bevy of test patterns on the ‘Spears & Munsil High Definition Benchmark‘ calibration disc. Unlike Edge Enhancement filters, I found that it added no visible edge ringing. Only on the Luma Zone Plate and Chroma Zone Plate did I find that the Darblet visibly distorted the patterns. These are clearly the parts of the video signal that the unit manipulates during its processing. But this is only visible on the test patterns, and not in any real viewing content.

I’ve left the Darblet engaged in my system for the past three weeks, on everything that I’ve watched: HD cable broadcasts, Blu-ray, VUDU, even DVD. Put simply, the Darblet makes everything look better, and has almost no downside unless you turn it up too high. I know that this sounds like an extraordinary claim. I could hardly believe it myself, but in my experience, the Darblet honestly does what it claims to do.

At present, the first generation of Darblet units have an HDMI handshaking issue that interacts with some equipment (including my own), which will force the device to convert the color space of a video signal to RGB regardless of what’s been input. For example, I’ve placed the Darblet after my Lumagen video processor in my signal chain. The Lumagen is programmed to output color in YCbCr 4:2:2 format. The Darblet changes this to RGB before it goes to my projector. A Darbee representative has confirmed that this is an error. The device is supposed to output the same color format that it takes in, and the company is working on a firmware update to correct this.

Honestly, this has not had any noticeable consequences in the video image on my screen. Still, all things considered, I’d prefer to keep everything in the original YCbCr format.

Unfortunately, the Darblet firmware cannot be upgraded by an end user. When Darbee Visual finishes the new firmware, owners will need to ship their units to the company to be updated. This is a nuisance, to be sure. Interested shoppers may wish to hold off on ordering a new Darblet until the next wave of units with corrected firmware is available. (In fact, this may be a moot point. The unit is currently backordered at all authorized retailers. By the time it comes back in stock, I believe that you should receive the updated version.)

As someone whose job it is to occasionally review Blu-ray discs, a device like the Darblet presents an interesting philosophical dilemma. Is it fair to evaluate the video quality of a Blu-ray disc with something like the Darblet engaged, when the very nature of the device is seemingly to alter the video signal?

After giving this a lot of thought and using the unit extensively, I’ve come to the determination that the Darblet doesn’t actually add anything that isn’t inherently present in whatever video I happen to watch. It simply helps the display to resolve the picture better. I would equate this to upgrading the display to a better model. The Darblet doesn’t change the picture so much as it improves the playback of what’s there.

If I were to upgrade my projector to a newer model with improved contrast specs and higher-quality optics that could focus the image tighter on my screen, would I say that the new projector altered the picture on the Blu-ray disc? Of course not. I should expect a better projector to improve the quality of whatever I watch. From what I’ve seen, that’s the sort of effect that the Darblet provides. I like it, and I’ve decided to leave it on full time.

How Much Will This Set Me Back?

Darbee Visual Presence has set the price of the Darblet at $269 regardless of where you purchase it. A list of authorized retailers can be found on the Darbee web site. I recommend AV Science, which offers free shipping and has a good return policy in case you decide that you don’t like it. (Because the item is currently backordered, it’s better to call a sales rep there. The AV Science web store won’t let you place an order until it comes back in stock, but the sales team will put you on the waiting list.)

Despite my initial skepticism, I was eventually won over by the DarbeeVision Darblet. Considering the amount of money that I’ve spent over the years upgrading my projectors and video processors and other assorted home theater equipment for optimal picture and sound quality, the $269 Darblet is a tremendous bargain for a device that has provided a clearly discernable improvement to the video quality of everything I watch, with no real drawbacks.

You may need to see this thing in action to believe it. But once you do, I bet you’ll be as impressed as I have been.