The desire among studios to create elaborate and gimmicky collector’s edition packaging for movies on disc sometimes hits the point of absurdity – especially when, as I experienced recently with the ‘Close Encounters of the Third Kind‘ Ultra HD Gift Set, the gimmicks built into the package don’t even work.

In this instance, I was very fortunate that I didn’t pay for it. Our reviewer E. received an extra copy of the gift set and was gracious enough to send it my way. I already had the old Blu-ray from 2007 and hadn’t planned to upgrade, but I’m curious to see the updated video transfer, both on the included Blu-ray and UHD discs. (Reportedly, the new Blu-ray suffers some contrast boosting and black crush issues not present on the UHD.) Personally, I would have been fine with just the standard keepcase edition, but I certainly wasn’t going to refuse the deluxe version.

The gift set comes in an oversized box with a translucent “window” across the front, behind which stand a bunch of silhouettes of aliens. 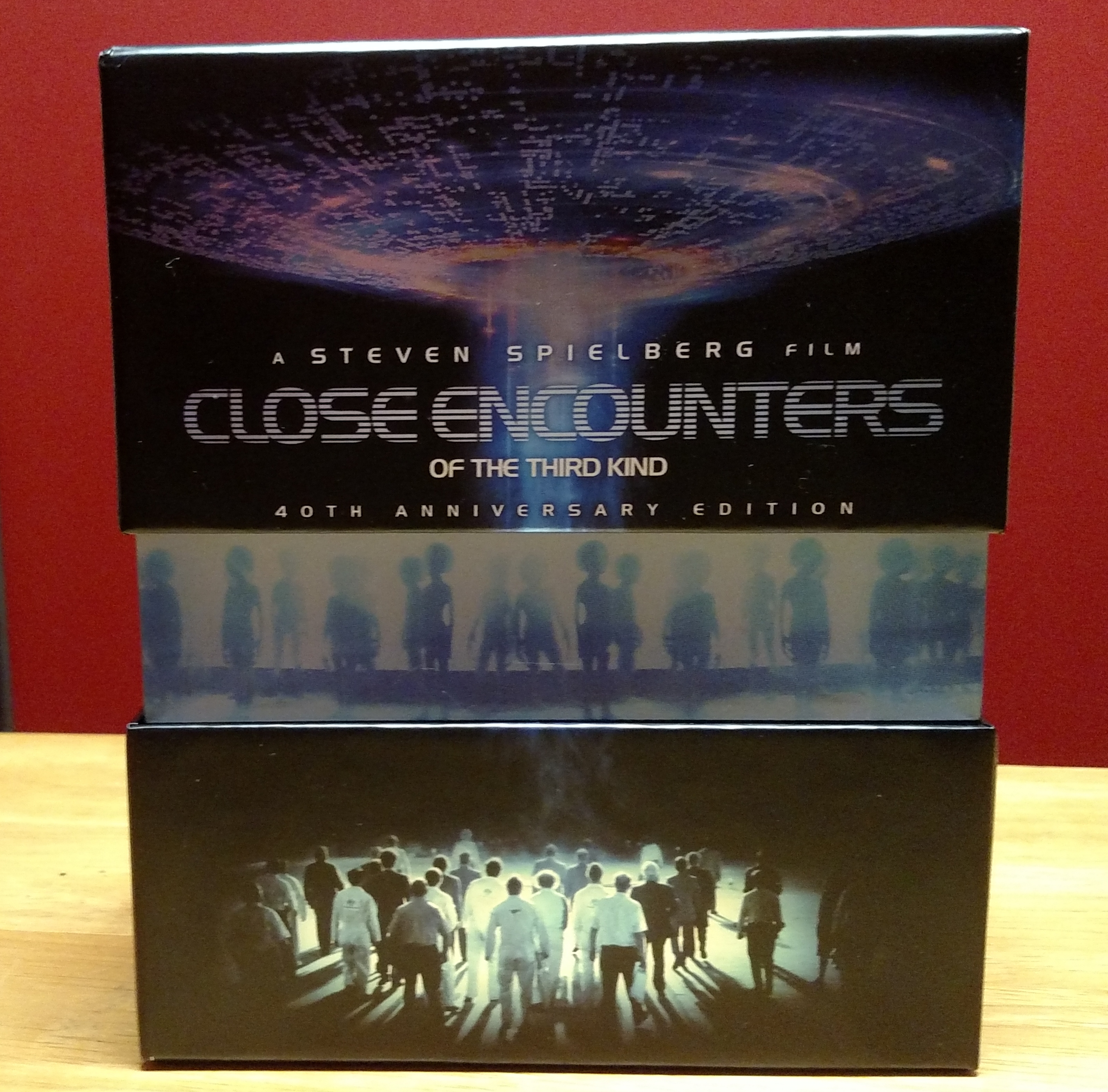 To get to the discs, you remove the top. 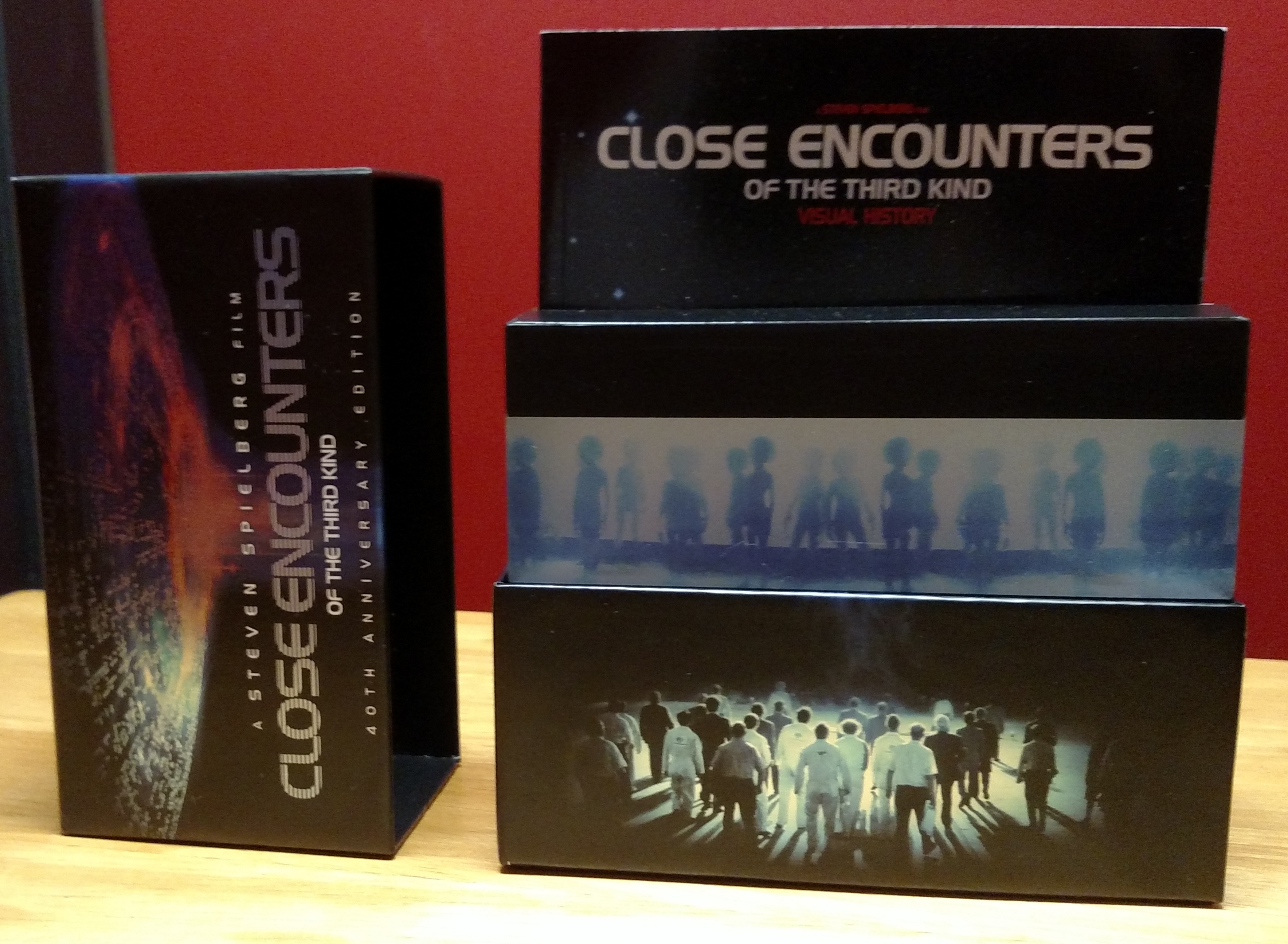 Inside are the Blu-ray/UHD keepcase (in a slipcover) and a photo booklet with images from the film. 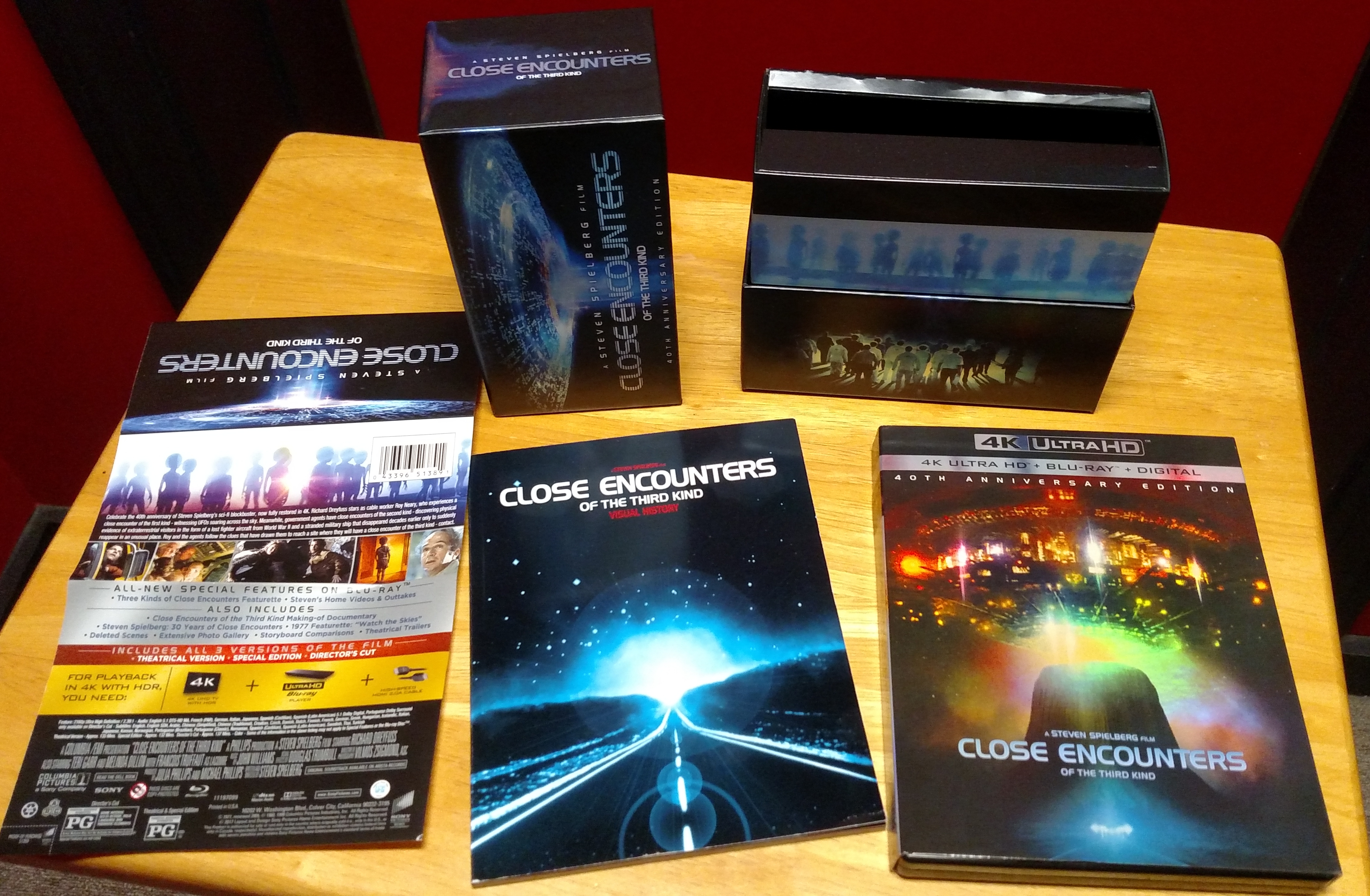 When you press this button on the side of the box, the window is supposed to light up and a speaker will play the famous five-note musical greeting heard at the end of the movie. 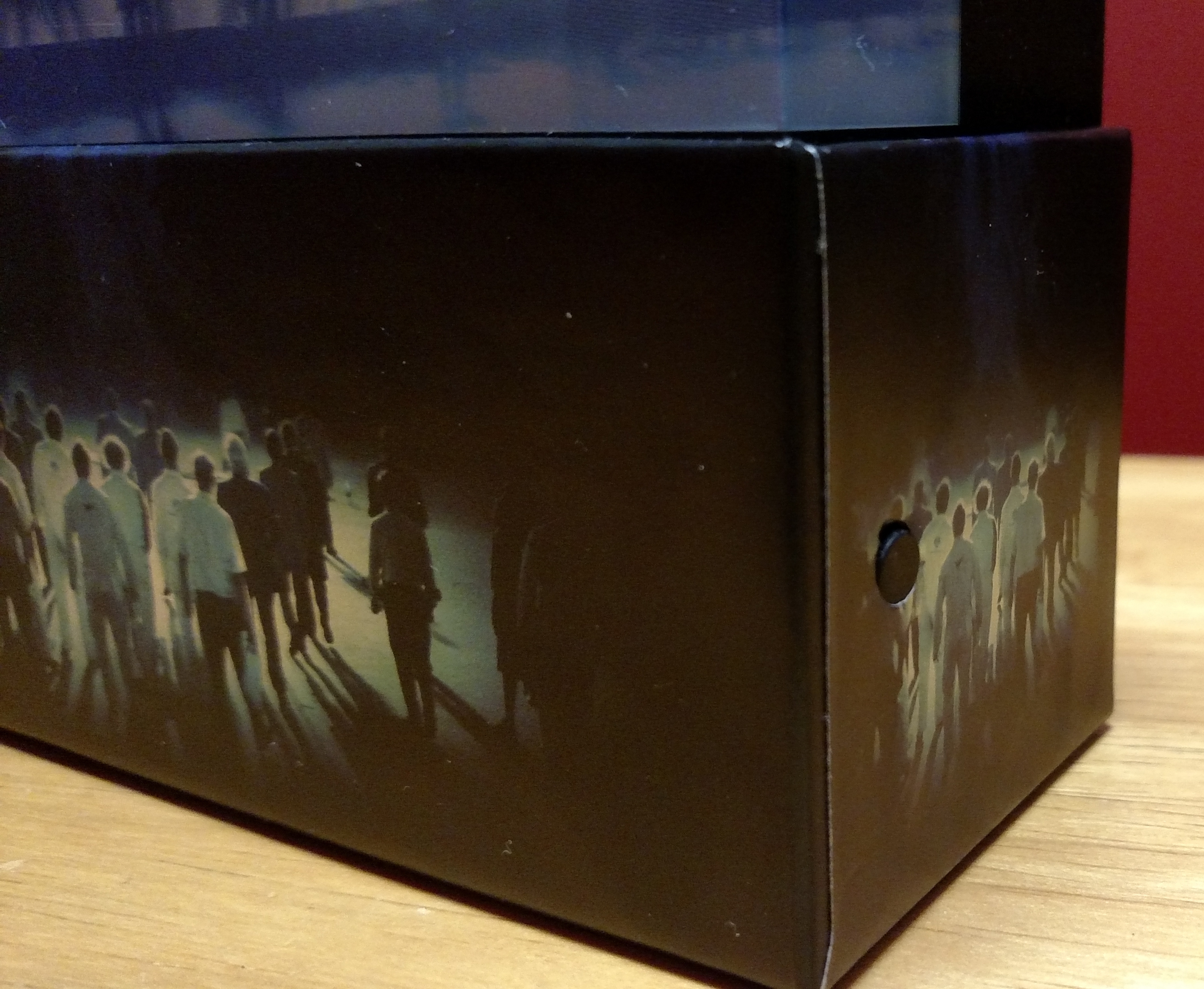 Unfortunately, when I pressed the button, nothing happened! This was a brand new copy fresh out of the shrinkwrap, and it was already dead.

Assuming that the batteries must have drained, I peered inside the box to see if I could replace them.

Not only is nothing visible at first glance, the package is not at all designed to be disassembled. Everything is either taped or glued in place, and I had to peel and pry the cardboard flaps out. Even as careful as I tried to be, this unavoidably caused creases and folds in the carboard which will probably never look right again.

The first thing I was able to access was the speaker, which sits behind the back panel. This did me no good on its own. 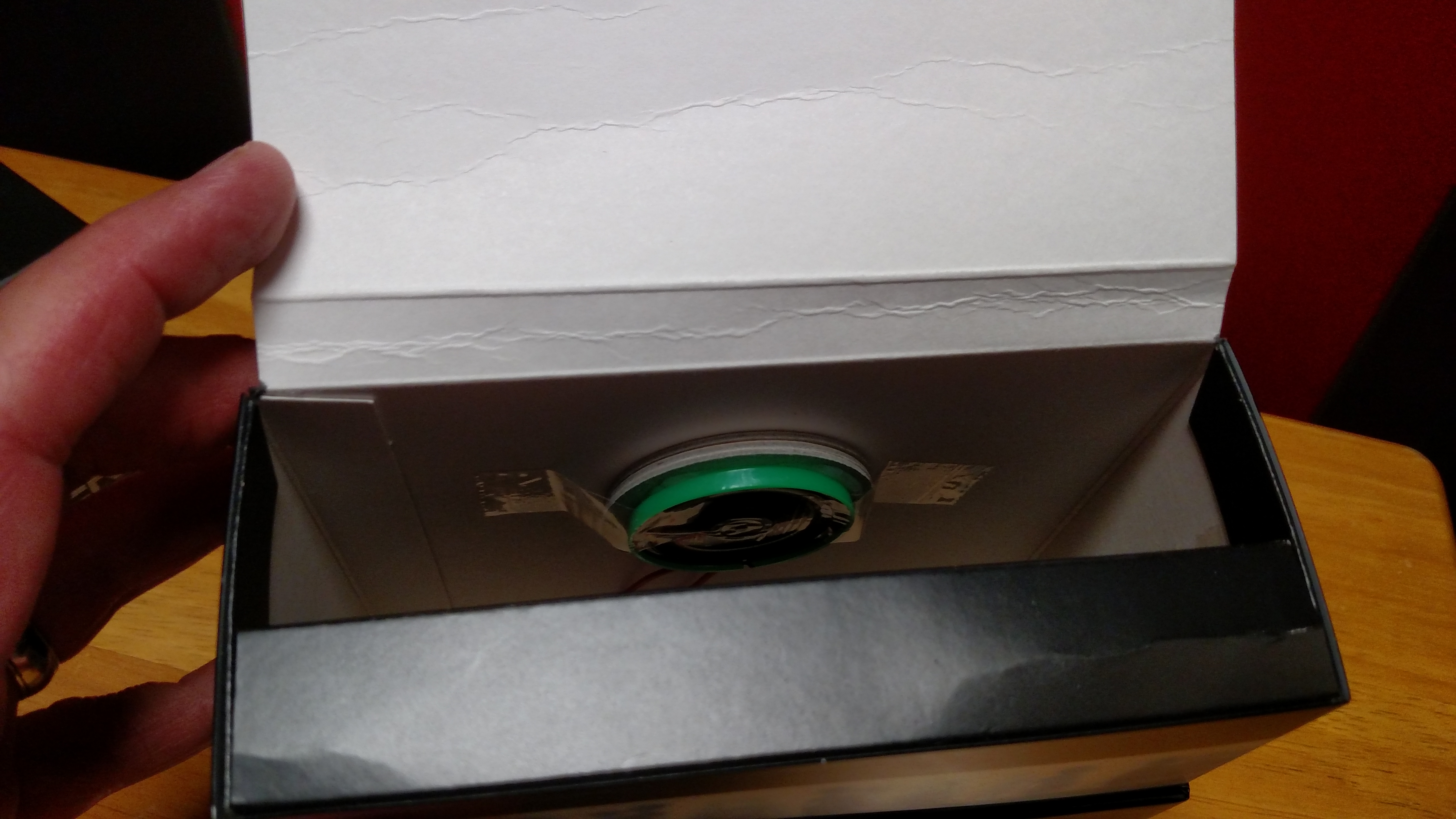 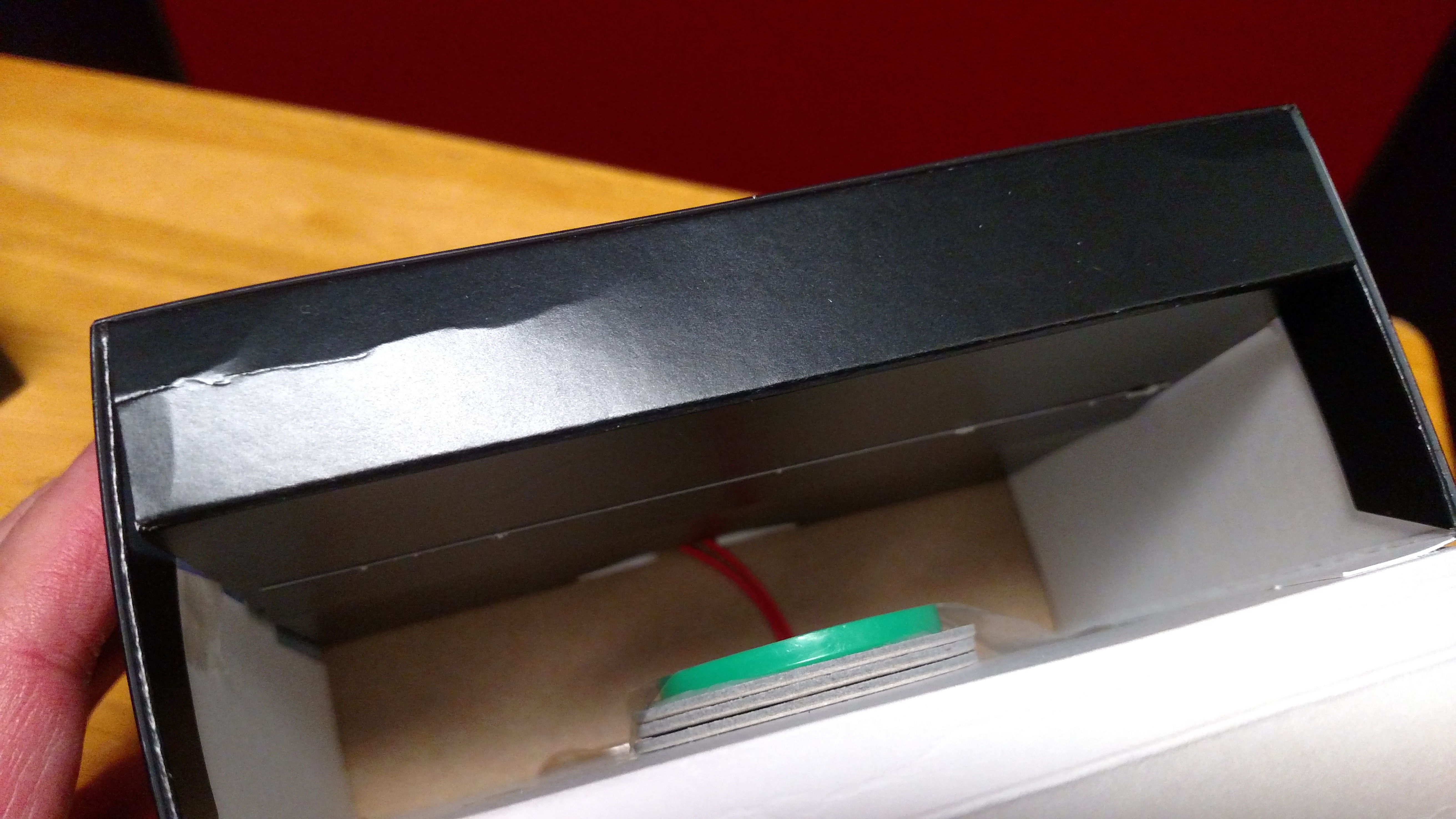 Some more prying got me to the sound and light board. You can see three batteries on it. Frustratingly, the board is glued to the bottom of the box and there’s no way to get it out without totally destroying the package. 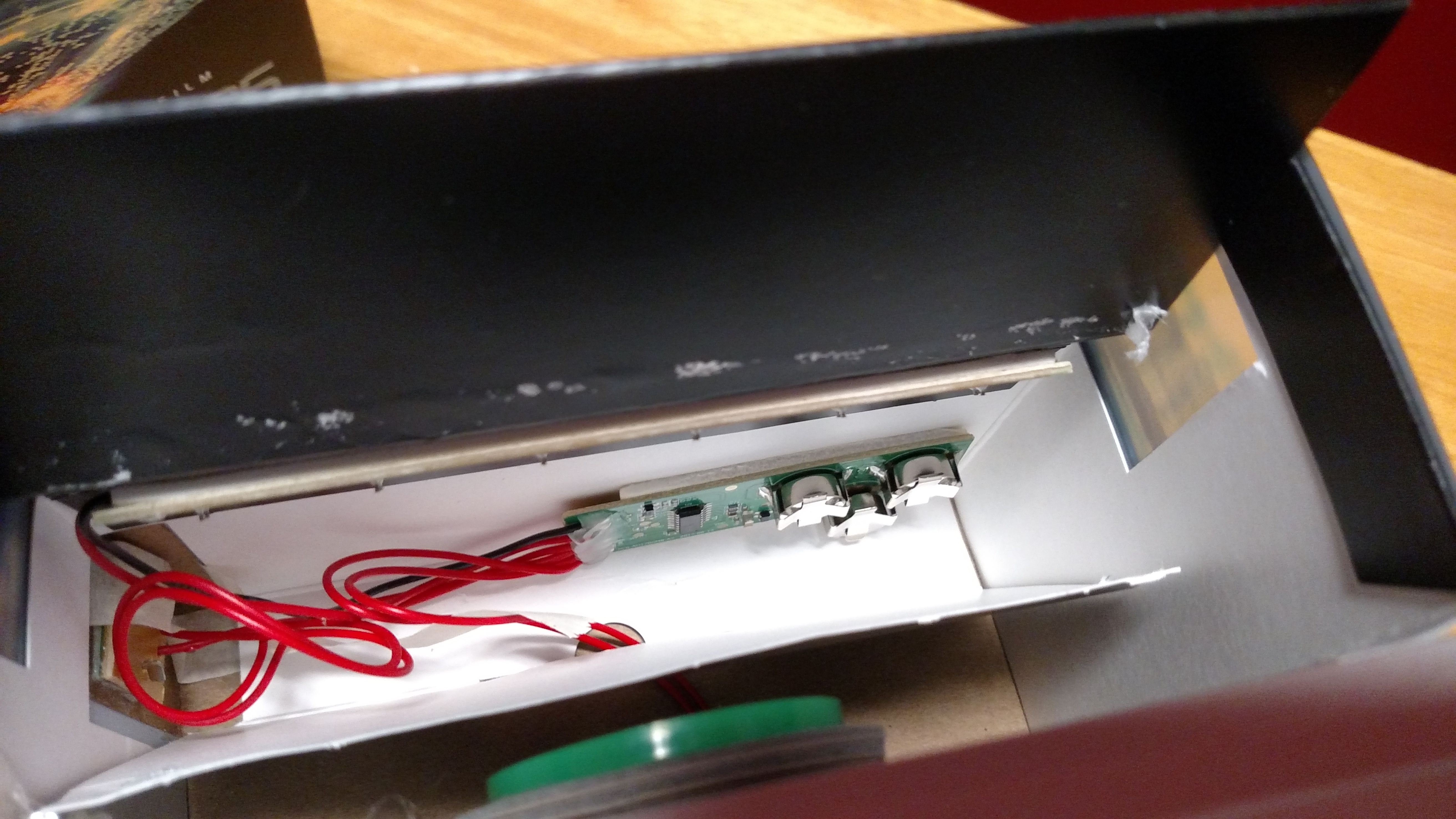 I wasn’t willing to go that far. Luckily, the simple act of jostling the wires around somehow got it working again. Apparently, the batteries weren’t dead after all. One of the wires must have been loose, and I guess I bumped it back into place.

This was very lucky. I was also able to reassemble the box without too much damage visible from an external inspection. A little scotch tape hidden away on the inside of the box holds everything back together again. With the top of the box back in place, it looks almost good as new.

All that work, and this is the amazing result I have to show for it. Sigh…

Now with the peace of mind that everything is working again, I can safely file this box set away on my shelf, never to push the dumb button again.

Someday these batteries will go dead, however, and it’s ridiculous that the package offers no way to get them out or replace them. I feel bad for anyone who actually paid the premium price for this thing.