Ever since the ‘Back to the Future‘ trilogy was released on Blu-ray back in October, the quality of its video transfer has been hotly debated by fans. Some think it looks terrific, while others think it looks too “processed.” One thing most everyone has agreed on is that the Blu-ray packaging that Universal put the discs in was pretty terrible. Fortunately, a modified version of the box set has finally started to trickle out into retail. Now, you just need to be careful that you buy the right one.

What was so bad about the original box set packaging? Primarily, it had an overly-complicated disc hub design that made prying the discs out very difficult. It’s so convoluted, you need instructions (not included with purchase) to use the damn thing. Many owners reported accidentally breaking the hubs off in the attempt. Some copies came damaged right from the factory. A lot of fans were so bothered by this that they went to the extra trouble and expense of importing the UK Blu-ray edition, which had more stable packaging.

Three months have passed, and Universal has apparently listened to complaints. Newer copies hitting the retail stream have been revamped with a more user friendly disc hub design. The problem now is making sure that you buy the right one, because the case art and UPC number are otherwise identical.

How do you tell the difference? Newer cases are slightly taller and slightly thicker. Most noticeably, the slipcover over the case should have a new, giant UPC sticker on top of the original UPC. It’s the same number, but significantly larger. You can’t miss it once you know what to look for. 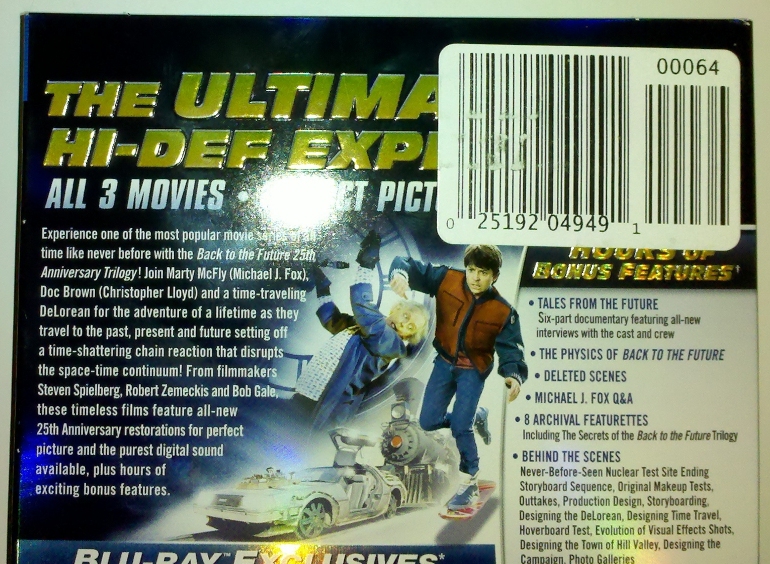 Online shopping is going to be difficult. Reports are that some recent orders from Amazon have shipped the new case, but others have continued to ship the old case. What you get may depend on how they’re stocked and which distribution center they ship from.

Shopping at brick and mortar retail is probably going to be a safer bet, since you can personally inspect the package before you put down any money. I popped into Best Buy last night and found two copies of the new case mixed in with about a dozen copies of the old version. Unfortunately, Best Buy charges $15 more for the box set than Amazon’s current price. (Luckily, I still had a gift card left over from Christmas.)

Buyer beware on this, but at least a better package is available for those willing to seek it out.