By the time this post is published, I should be on a plane back home from Los Angeles, where I attended the Blu-Con conference on Tuesday. No, not just attended. I spoke at the conference. On a stage. In front of people. With cameras pointed at me… Gulp.

Like most writers, I spend my days behind a desk carefully crafting eloquent diatribes about this subject or that. The beauty of putting these thoughts to paper or computer screen is the ability to revise and edit, to rearrange the words and hone the text until it says exactly what I want it to say. I’m going to be honest here, public speaking isn’t my thing. That’s putting it lightly. I’m kind of terrified of it. Have you ever taken the Myers-Briggs personality profile questionnaire? I’ve had to do it about a half dozen times over the years. It’s a favorite lazy management tool at the some of the companies I’ve worked for. Each time, I’ve always rated an off-the-charts “I” for introvert. In other words, I’m a nerd who’d rather not ever leave his own home if he could help it.

So you can just imagine my absolute mortal terror as I walked onto the stage at the ballroom in the Beverly Hilton, the same stage where the Golden Globes are broadcast. My job was to moderate a discussion panel on the ever-so-exciting topic of Blu-ray interactivity. Fortunately (for me), my panel was late in the day, after a lot of the crowd had already filtered out. Most people came to see James Cameron speak early in the day, or maybe the studio Presidents’ panel (which was a hardcore business discussion). I’m not going to pretend my topic was compelling enough to make large crowds of people stick around after lunch.

That’s fine by me. Less people staring at me equals less stress. Also in my favor is the fact that, once on stage with the lights blaring down on me, I couldn’t see the audience at all. Thank God for that! I shifted my attention to the panelists and tried to pretend no one else was in the room.

Our site’s Michael Palmer was also at the conference, and will be providing more comprehensive coverage of the whole event. I don’t think I could possibly be objective about what happened this day. A lot of it is just a blur to me. I think it went OK. And by that, I mean that I didn’t pass out or develop horrible flop sweats. I’m sure (no, I know) that I came across as nervous, but I powered through, and don’t believe that I stammered or fumbled too embarrassingly.

I got out most of the questions I wanted to ask. The tone of the conference as a whole was, “Rah rah! Blu-ray is the greatest thing ever!” It wasn’t my place or the purpose of the panel to upset that. And frankly, I do love Blu-ray, and find great potential in its interactive abilities – even if that potential hasn’t really been tapped yet. So, yeah, I tossed out some softball questions. But I also managed to get in some pointed questions about whether BD-Live is being used appropriately, and whether its direction needs to be re-thought.

Anyway, the 45 minutes on stage flew by amazingly quickly. Right now, I’m just glad it’s over. My nerves are still on edge. So, as I write this, I’m treating myself to a ridiculously expensive room service meal here at the Hilton. 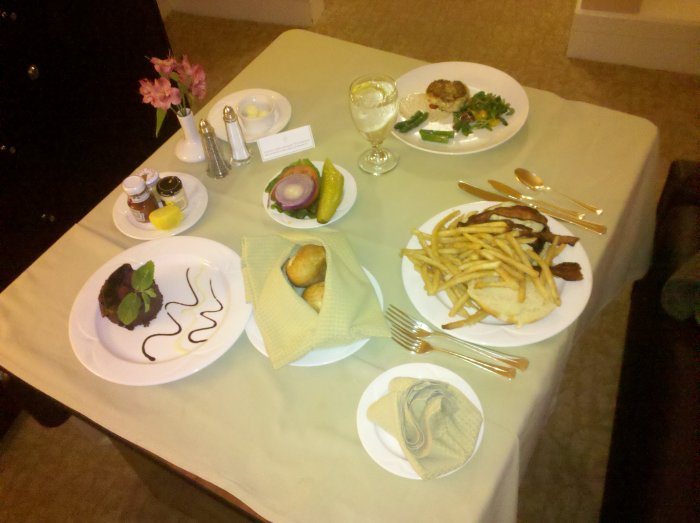 After that, I’m going to crash hard.

For the record, I did not speak to James Cameron. Not that I ever expected to. He took a small handful of questions after his speech, and then bolted from the place.

As part of his presentation, Cameron showed clips from the new extended version of ‘Avatar‘ – one of which was, I swear to God, a buffalo hunt. Well, it’s an alien buffalo hunt, but it’s still virtually the exact same scene from ‘Dances with Wolves’. As if his movie weren’t already enough of a carbon copy of that one.

[Here’s Palmer’s write-up of the event, and here are some photos from my panel.]