On April 22, 2010, the highest grossing movie of all time was released on DVD, Blu-ray, and on a few video on demand services.  It’s too early to tell right now, but it’s almost certain that ‘Avatar’ sold like crazy.  But who is it that’s really going out to buy it?

I’ll admit I’m not a big fan of the movie.  It’s not the predictable plot, because I think that’s an unfair criticism.  Was the plot of ‘Titanic’ a huge surprise?  Did we expect Luke Skywalker to lose at the end of the ‘Star Wars’ trilogy?  For that matter, are the countless reproductions of ‘Romeo and Juliet’ any less interesting because we already know what’s going to happen?

The problem with the movie, for me, was that it didn’t feel like a movie.  It felt like an event, or a ride.  It was something to go and experience.  Compare it to something like Star Tours, the ‘Star Wars’ themed ride at Disney’s MGM park.  It’s cheesy, the acting is pretty bad and, as a movie, it just wouldn’t work. 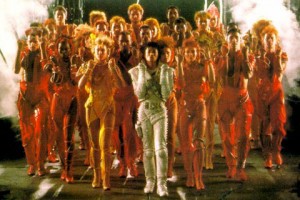 But it’s not a movie, it’s a ride, and it delivered on providing me with exactly what I expected – a few minutes of ‘Star Wars’ themed fun.  And to that end, ‘Avatar’ did what it was supposed to.  I got to see cutting edge 3-D and plenty of neat alien landscapes.  I’m not going to complain about the writing in Star Tours or the acting in ‘Captain EO,’ and so there’s no reason to complain about those things in ‘Avatar.’

If the comparison seems demeaning, think about all the press surrounding the film’s release.  ‘Avatar’ was marketed as an experience, not a movie.  James Cameron may have talked about the world and the characters, but what really fascinated people was the 3-D experience.  It worked too; over 70 percent of the film’s opening weekend gross was from 3-D ticket sales.

But that makes me think.  It’s clear that the main reason to see ‘Avatar’ in theaters or at all was the 3-D experience, but you’re not going to get that with the Blu-ray that’s out now.  You won’t get that same immersion, and it won’t be an event.  ‘Avatar’ on Blu-ray will just be a movie, but that’s not much draw.

So who are the people buying ‘Avatar’ right now?  It’s not 3-D enthusiasts, though it will be when the 3-D version finally comes out.  It’s probably not film buffs, because they’ll wait for the special edition, just like they did for the ‘Lord of the Rings’ DVDs. They don’t want a disc without special features.

And I really doubt it’s the same crowd that went to see the movie because it was an event.  Seeing ‘Avatar’ on the big screen in 3-D and seeing it at home are two very different

It seems like the only people that should really be rushing out to pick up the ‘Avatar’ Blu-ray are those that need something to show off their home theater system, and those that really and truly enjoyed the film.

I wouldn’t be surprised to see Blu-ray and DVD sales come in at lower numbers than for comparable films over the course of its lifespan.  Then again, when the numbers come in I may be forced to eat my words.