Due to a lack of suitable prizes, we took a couple weeks off from holding contests. Lest you think that we no longer love giving away free stuff to our readers, we’re back with a vengeance this week. Enter our new contest for your chance to win the creepily spectacular ‘American Horror Story: Asylum‘ on Blu-ray!

In the show’s second season, ‘American Horror Story’ made the bold decision not to continue any of the storylines from the first season. Instead, the series has established itself as an anthology with a recurring cast of actors playing new roles in new storylines each year. Even if you didn’t catch the first season, you should have no trouble jumping right in here.

‘Asylum’ takes us back in time to the 1960s with a new setting in the world’s dankest, darkest, altogether ickiest loony bin, where all sorts of crazy things happen to both the patients and the staff – from unethical medical experiments to demonic possession to alien probing and more. You just never know what sort of fresh lunacy the show will deliver from episode to episode. In addition to returning star Jessica Lange, this season brings in guest roles from a great cast of actors including James Cromwell, Ian McShane and Joseph Fiennes.

To win a copy of the Blu-ray box set, all you have to do is participate in our photo caption contest by giving us a funny or clever caption for the following image: 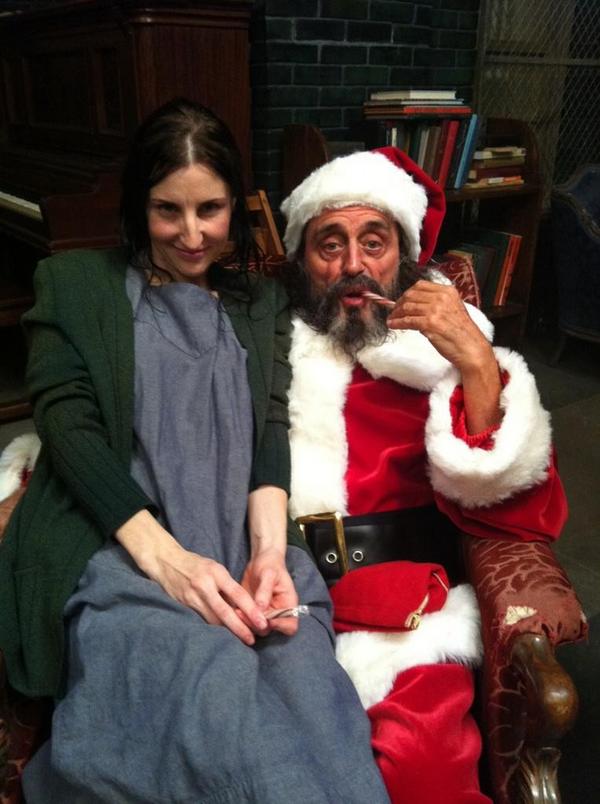 For example: “It’s more fun to be on Santa’s naughty list.”

We have one copy of the box set to give away. The winner will be chosen at our own subjective discretion based on whichever responses we enjoy the most. Entries are limited to 10 per person. That should give you plenty of opportunity to craft a good submission, but will also help us to avoid any potential appearance of awarding prizes based on volume rather than quality. (Please heed this limit. You will be taken out of consideration if you submit more than 10 entries.) All entries must be submitted in the Comments section of this blog post. Please do not attempt to email them to me.

The deadline for entry is Friday, October 11th. The winners will be announced the following week. Good luck!