Arriving in an attractively sturdy cardboard slipcase that safeguards a 176-page hardcover book, ‘Alien Vault: The Definitive Story of the Making of the Film’ is true to its name. The book allows readers to dig through a treasure-trove of information, photos, concept art, storyboards and firsthand accounts of the production of Ridley Scott’s seminal vision of sci-fi terror, ‘Alien’.

Taking a short break from his editorial and review duties at Empire magazine, Ian Nathan gives fans and neophytes alike the definitive making-of story behind of one of the greatest horror films ever made. He approaches the exhaustive wealth of material in a friendly and easily-accessible narrative form, recounting small, individual events as if they happened just recently. He tells the history of the production as a significant event that will be with us forever.

The various pictures and original artwork on each page reinforce this thought. ‘Alien‘ made film history not just at the box office or in popular appeal. The 1979 movie changed how we look at film, pushing the symbolic potential of what can be done with imagery, no matter how grotesque or monstrous. It also introduced audiences to cinema’s first fully-developed, independent female action hero. Nathan explores some of these areas and offers plenty of interesting analysis, most of which can be found in the closing chapter, aptly named “Legacy.” 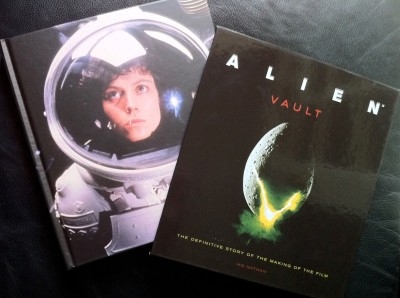 The book is an intimately-detailed and comprehensive account of how the film came to be, and how close it came to never being made at all. Understandably, it commences with Dan O’Bannon, who was frustrated by the demise of Alejandro Jodorowsky’s attempt at filming Frank Herbert’s ‘Dune’. Completely broke and sleeping on Ron Shusett’s couch, O’Bannon struggled with a screenplay idea then-titled ‘Memory’. He was stuck on one scene where an alien creature bursts through the chest of a human crewmember aboard a spaceship. After meeting artists H.R. Giger and Jean “Moebius” Giraud on Jodorowsky’s set, O’Bannon was inspired to complete his script with Shusett’s help. Of course, they had to wait until the enormous success of ‘Star Wars’ before their film could finally be greenlit.

The following chapters then trace the rewrites, which disappointed O’Bannon and Shusett, and Ridley Scott’s eventual involvement after several other filmmakers turned down the assignment. Scott was the only director to see the story’s potential beyond its B-movie trappings. He had endless battles on set with producers over budget concerns and fears of the film’s freakishly perverse imagery, especially when Giger was tasked with designing the alien and the crashed derelict spacecraft. The chapter on production design is probably one of the more fascinating sections of the book. It reveals to fans just how incredibly supportive Scott was of Giger’s intended imagery. The book also has a section dedicated to Sigourney Weaver and her iconic portrayal of Ripley.

Some of the best aspects of this handsome book – aside from Nathan’s telling of the film’s production, of course – are the wonderful on-set stills and artwork reproductions, including detailed schematics of the Nostromo and Scott’s storyboards, which were famously dubbed “Ridleygrams.” These come in separate, envelope-type pages with brief descriptions. They make an excellent addition to any fan’s collection. In fact, the hardcover alone is a must-own for collectors of film memorabilia and those fascinated by film history. It stands proudly alongside several other detailed books about movies in my library. It’s a definite keeper, and one of the best accounts I’ve read concerning Ridley Scott sci-fi horror masterpiece.