Those of us who collect movies tend to have obsessive personalities that compel us to collect other things as well. Beyond Blu-rays or DVDs, what other items do you collect, or have you collected in the past?

I’m not much of a “stuff” or “clutter” person (I’ve done two 500+ mile moves within the past two years), so aside from books and DVDs I don’t collect much. The two exceptions to this rule have been shot glasses and pins. My sister and her husband give me shot glasses from all of their travel destinations, and I return the favor, but the rule is that we need to find the ugliest, most offensive glass we can. Some of these are truly terrible. The only two shot glasses I have in that collection that aren’t from their travels are a pair of Dawn of the Dead glasses I got from the producer of that movie, Richard Rubinstein. 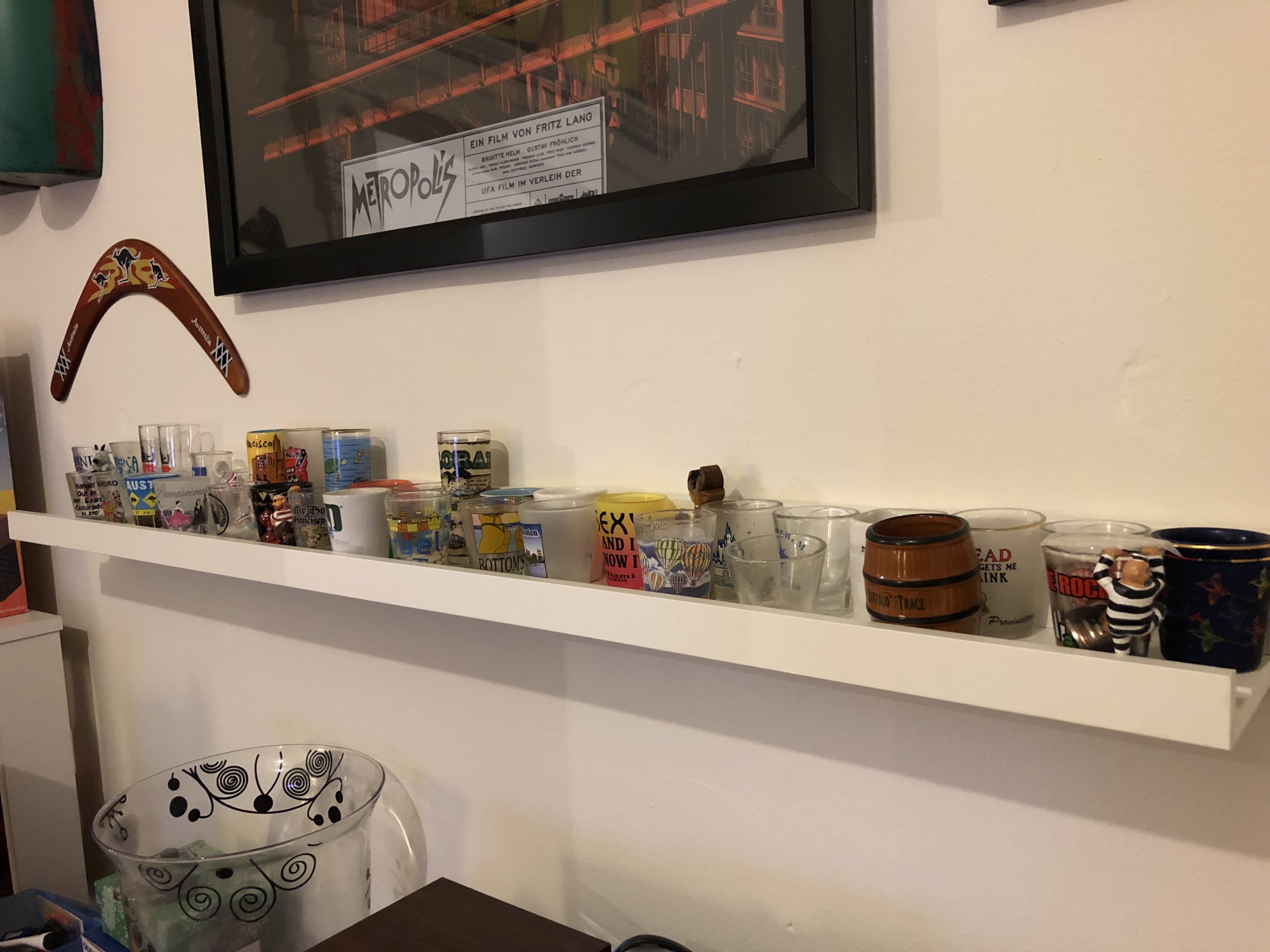 The pins are a collection of random things I love, which means that they’re mostly of TV and movies and film festivals over the years. If you’ve never looked into the world of enamel pins, guard your wallet before you do your investigation. There are so many amazing designers who love all the same things you love and they will sell you the perfect way to express that fandom for only $10-15. It adds up! Bonus points for naming all the movies. 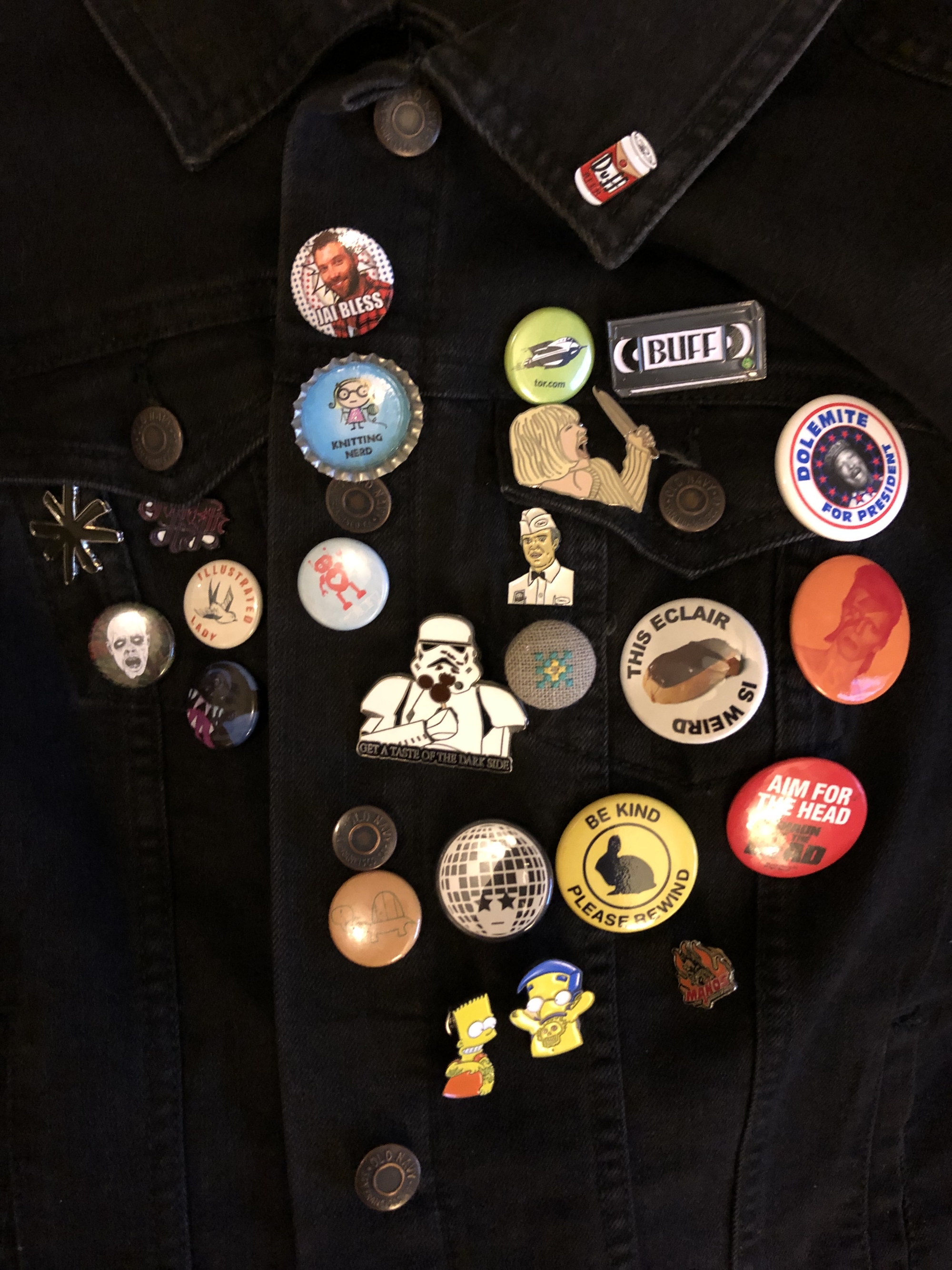 I became obsessed with film around the age of 12, especially the period known as Hollywood’s Golden Age. (I have That’s Entertainment! to thank for that!) Back then, I watched every old movie I could find, but as much as I loved watching classic films, I loved reading about them just as much. That voracious craving for knowledge spawned a movie book collection that now encompasses about 500 volumes ranging from biographies of stars, directors, and moguls to studio histories, critical assessments of genres and themes, glossy portrait compendiums, collections of fan magazine articles, and salutes to iconic films. I can’t say I’ve read all of them, but my library has proved to be an invaluable research source over the years and allowed me to add historical tidbits and anecdotes to many of my classic Blu-ray reviews. The accompanying picture displays just a portion of the collection. 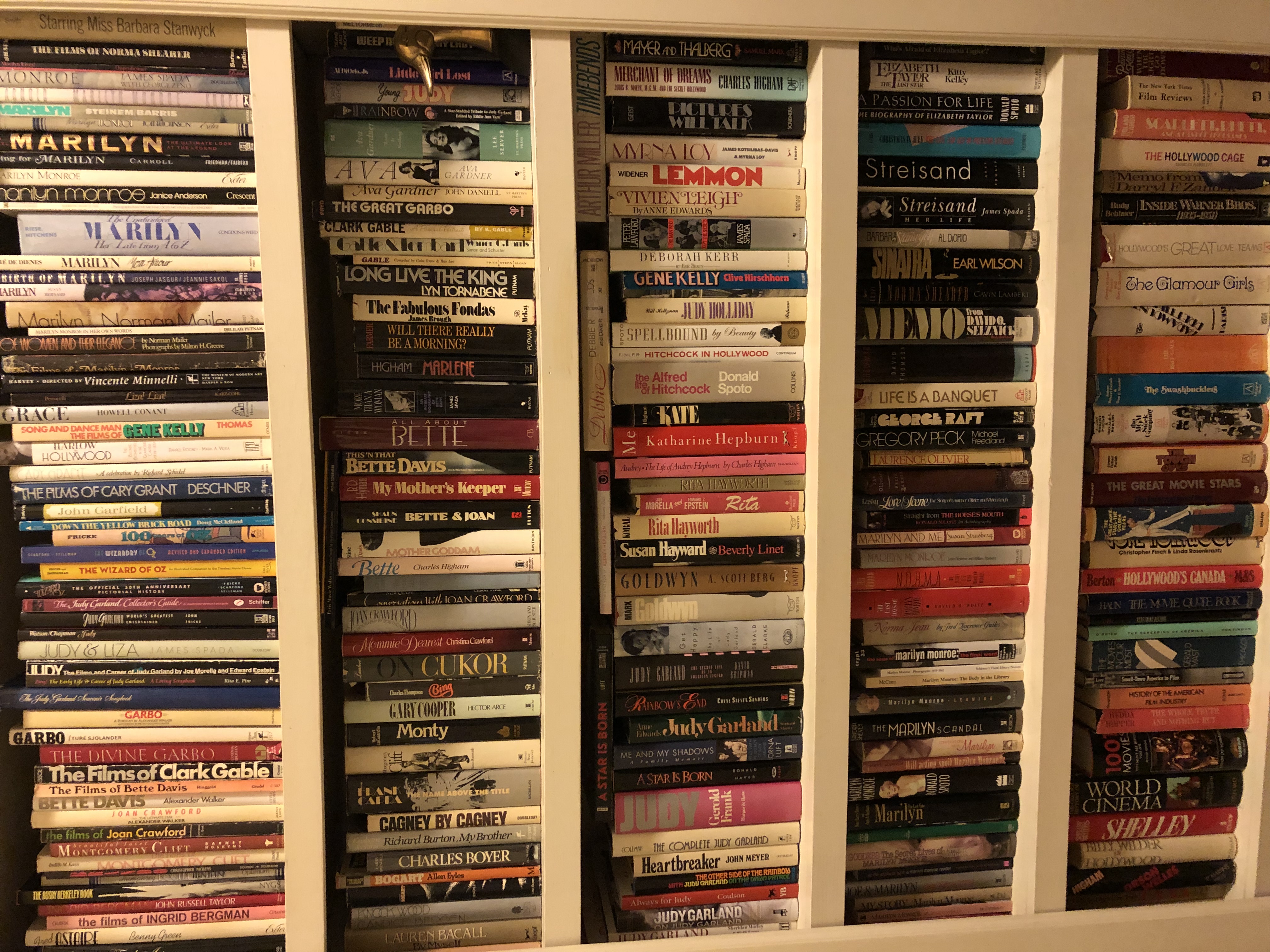 When I was a kid, I had a furious two years of collecting comics. Eventually, I had to admit that it was too much. I only collected X-Men series comic books, but the constant addition of new titles, one-offs, and special editions (never mind the expensive back catalog) had turned the hobby/passion into a frustrating money pit. I quit cold turkey, but subsequent collectathons have stuck with me. (I do still have the two boxes of comics which seem especially archaic as the paper ages.)

Now I have a toddler son and am one year into an enveloping Lego collection. In part, I blame Walmart clearance prices and the Lego Store gift-with-purchase promotions. It’s an evolving hobby. I collected the entire Lego Batman Movie line, most of which is way too complicated to put together for now, but I have no plans to collect an entire theme/sub-theme again. Lego puts out a crazy amount of everything multiple times a year, thus the clearance. I have no illusions about ever re-selling this stuff, and as a family hobby, it’s been great. I just need to find the right balance. 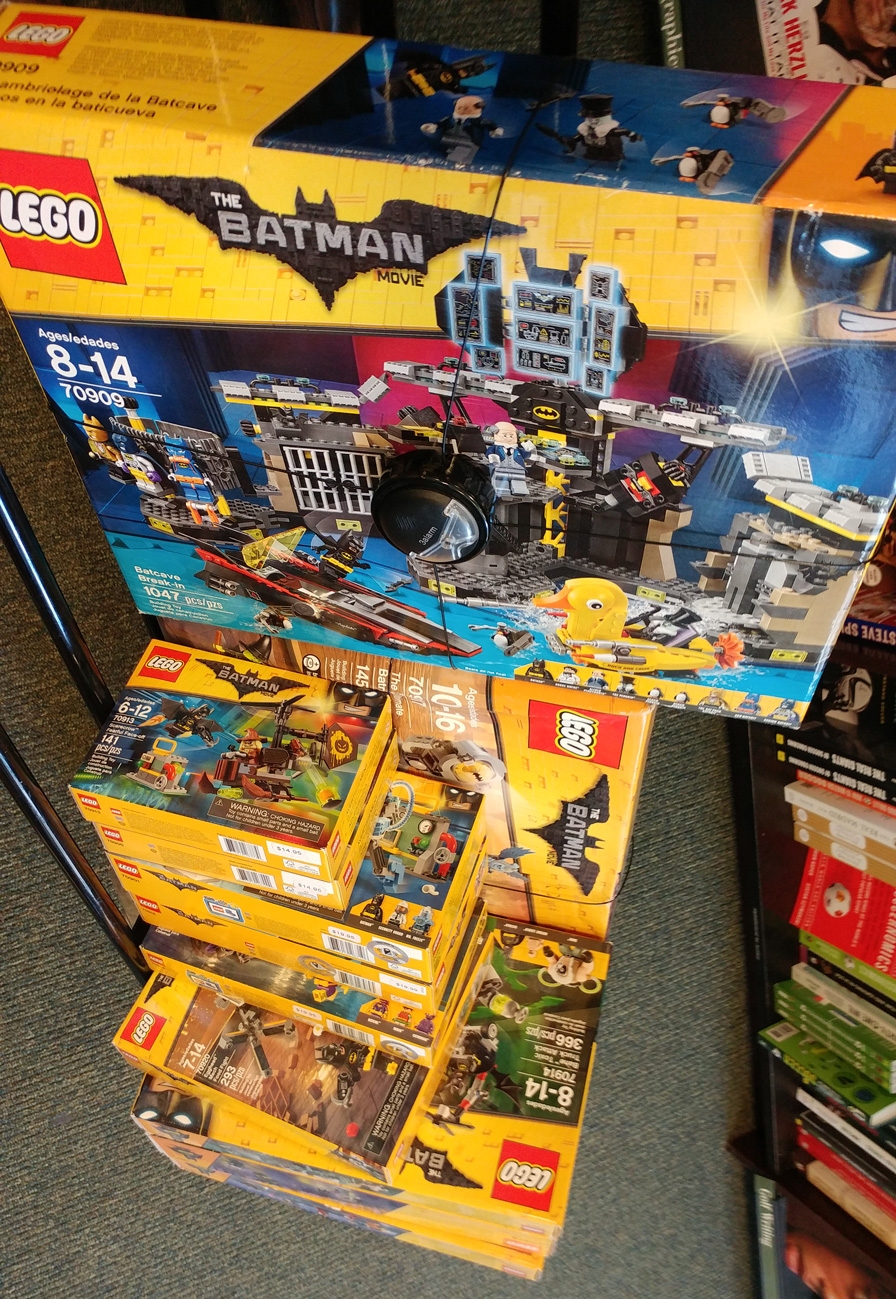 Comic books were my first love, and I genuinely can’t remember a time in my life before them. Comics are a fixture of my very earliest memories: buying a Peter Porker, The Spectacular Spider-Ham one-shot off a spinner rack in a convenience store, gawking at Snake Eyes’ secret origin in G.I. Joe #27 after raiding a used bookstore, listening to an adaptation of Fantastic Four #126 on a 12″ record, and my father handing me a crisp paper bag with a Superman comic inside. I’d struggle to recall what I had for lunch yesterday if you were to ask me, but I can still vividly remember 35 years later the opening page with a prison guard telling Lex Luthor to keep his nose clean.

I’ll never forget my first comic book convention, held at a hotel in Valdosta, GA in early 1989. My father made the grave mistake of not giving me a budget to work with, and I spent around $100 raiding the dime and quarter bins. I only had a handful of comics before that day, but I left with a collection. Not too long afterwards, I was astonished that I owned comic books from the 1960s, like The Amazing Spider-Man #54 and Fantastic Four #50 – relics from an era I couldn’t even imagine. And, of course, the brand new comics I was buying back then are older now than those ’60s comics were then.

Admittedly, it’s been a while since I last stepped foot in my favorite local comic shop. There was a point where I was renovating my house and planning a wedding, so comics fell by the wayside for a bit. At first, I had every intention of picking up where I left off once I could finally go up for air, but after a few months away, I realized that I didn’t really miss them. The constant turnover of writer and artist teams, storylines being interrupted by one lousy crossover after another, the obnoxious number of spinoffs, and the lackluster creative directions soured me too much. I know I should just focus on creator-owned comics instead, but without Spider-Man, the Fantastic Four, and the Legion of Super-Heroes in the mix as well, I had a hard time mustering the enthusiasm I ought to have. I still pick up trade paperbacks and graphic novels every so often, though, such as The Vision, The Unbeatable Squirrel Girl, and My Boyfriend Is a Bear.

Somewhere around ten years ago, I wondered how many comics I actually had. I estimated somewhere around 750. The final tally was north of 3,500. (I am clearly terrible at estimating.) I have no idea what it’s up to now. The closet in my office is packed floor to ceiling with longboxes and collected volumes. I have more framed sketches and pages of original artwork than I know what to do with. I even have a Nintendo DS with a sketch of Scott Pilgrim as Tanooki Mario on it! My collection is not particularly photogenic right now, but one of these days, I’ll figure out how to store and display all this stuff once again.

While comics aren’t directly a big part of my life at the moment, it’s hard to imagine what things would be like without them. I’m still obsessed with superheroes on the big screen, and I watch as many comic-based TV series as I can. So many lifelong friendships have in some way revolved around comics, and a fair number of my friends indeed wound up working in the industry. I still have stacks of homemade comics that my best friend and I doodled in junior high and high school. Heck, for me, it wasn’t a childhood dream that I’d one day draw comics for Marvel; it was an absolute certainty. Hopefully middle-school-aged Adam wouldn’t be too disappointed that I wound up being a coder like Cypher from The New Mutants.

I’ve collected many things over the years. Factoring out the Laserdiscs, DVDs, and Blu-rays, my first and most important obsession is with G.I. Joe: A Real American Hero action figures – specifically, the original run of figures from 1982 to 1994. Short of a few paint or body part variations that have been hard to track down (or seem insignificant to me), I have a complete set from that period arranged in chronological order in a cabinet in my theater room, from Clutch the V.A.M.P. jeep driver (my first and still favorite figure) to unreleased prototypes of the canceled Manimal space aliens. 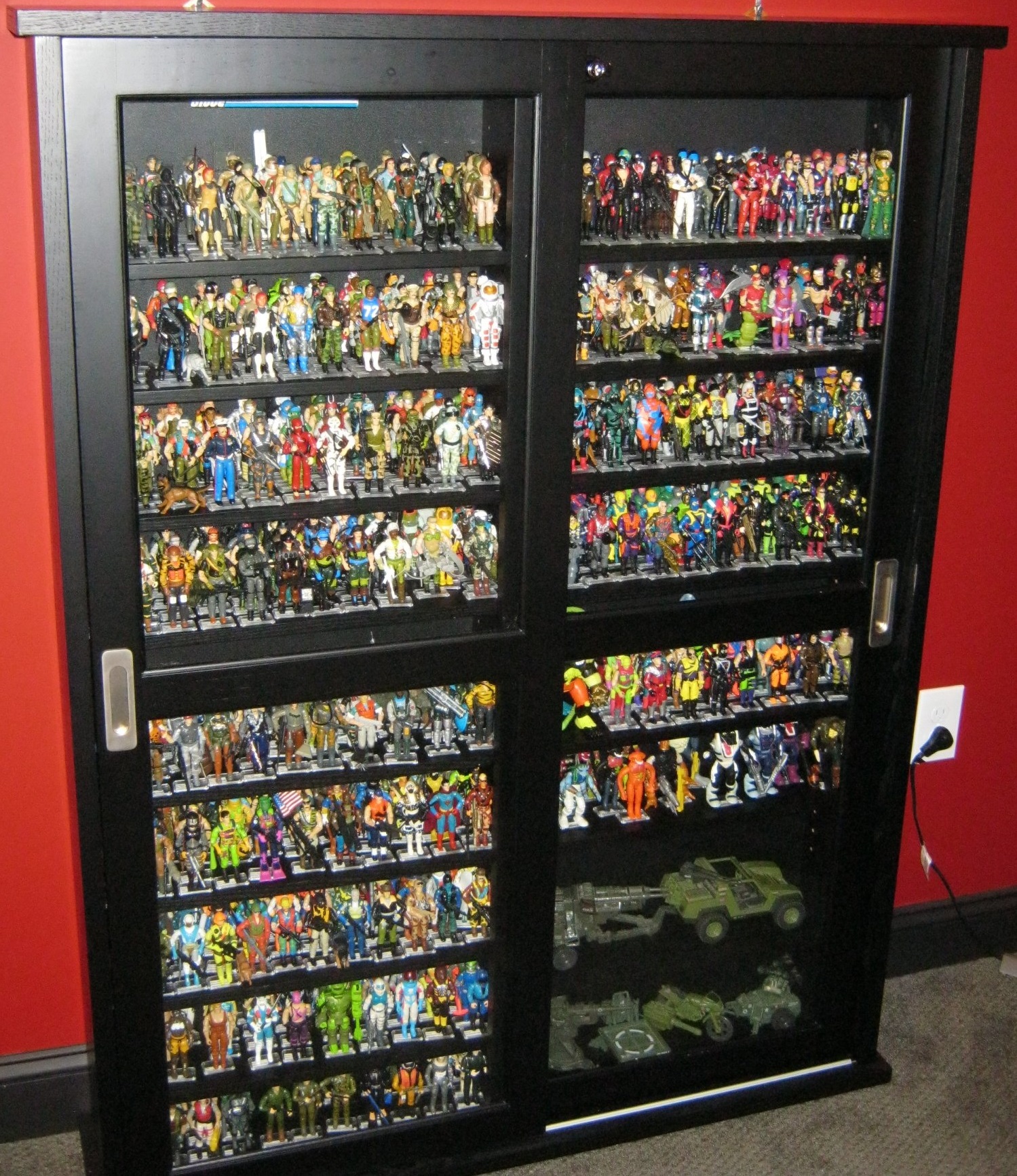 My one regret is that I didn’t have the foresight to buy a second, identical cabinet. I managed to get all the figures into this one, but only by squeezing them into rows three or four deep, which makes it difficult to see many of them, especially those on the lower shelves. Unfortunately, the manufacturer later stopped making this cabinet and it’s not possible to get another one that matches.

Separate from that, I’ve also amassed a signficiant collection of Dune movie merchandise, a portion of which is on display in a corner of my home theater that I’ve turned into a Dune shrine. One of the things that most fascinates me about this movie is how badly the studio misjudged its target audience. Certain that they had the next Star Wars on their hands, the suits at Universal licensed merchandizing rights to every vendor imaginable. As anyone who’s seen it should realize, Dune is not a movie made for children. Nevertheless, among the many products with its branding are toys, games, coloring and activity books, party favors, and even kid-sized bed sheets. The more tonally inappropriate a piece of merchandise, the more I love it! 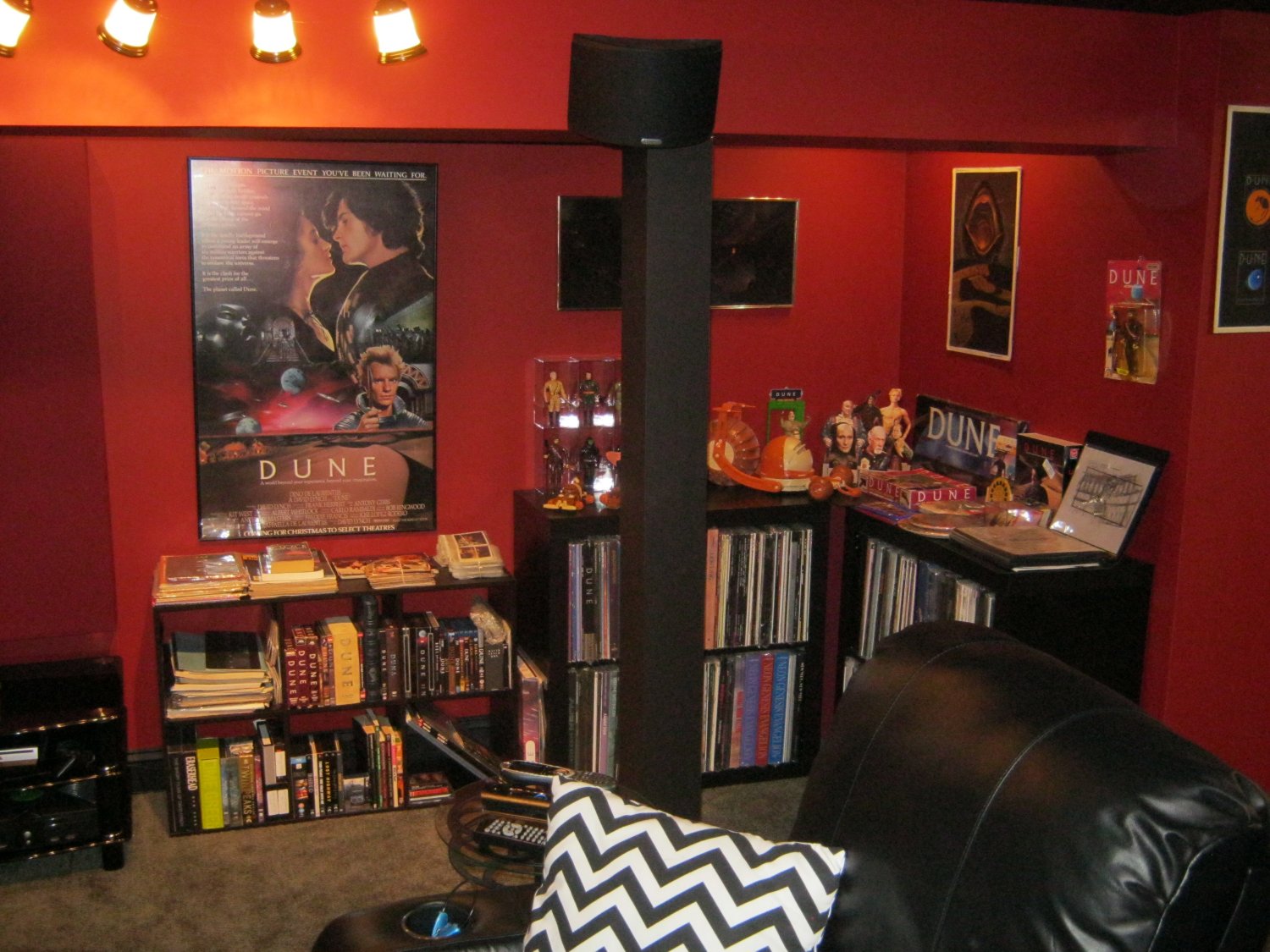 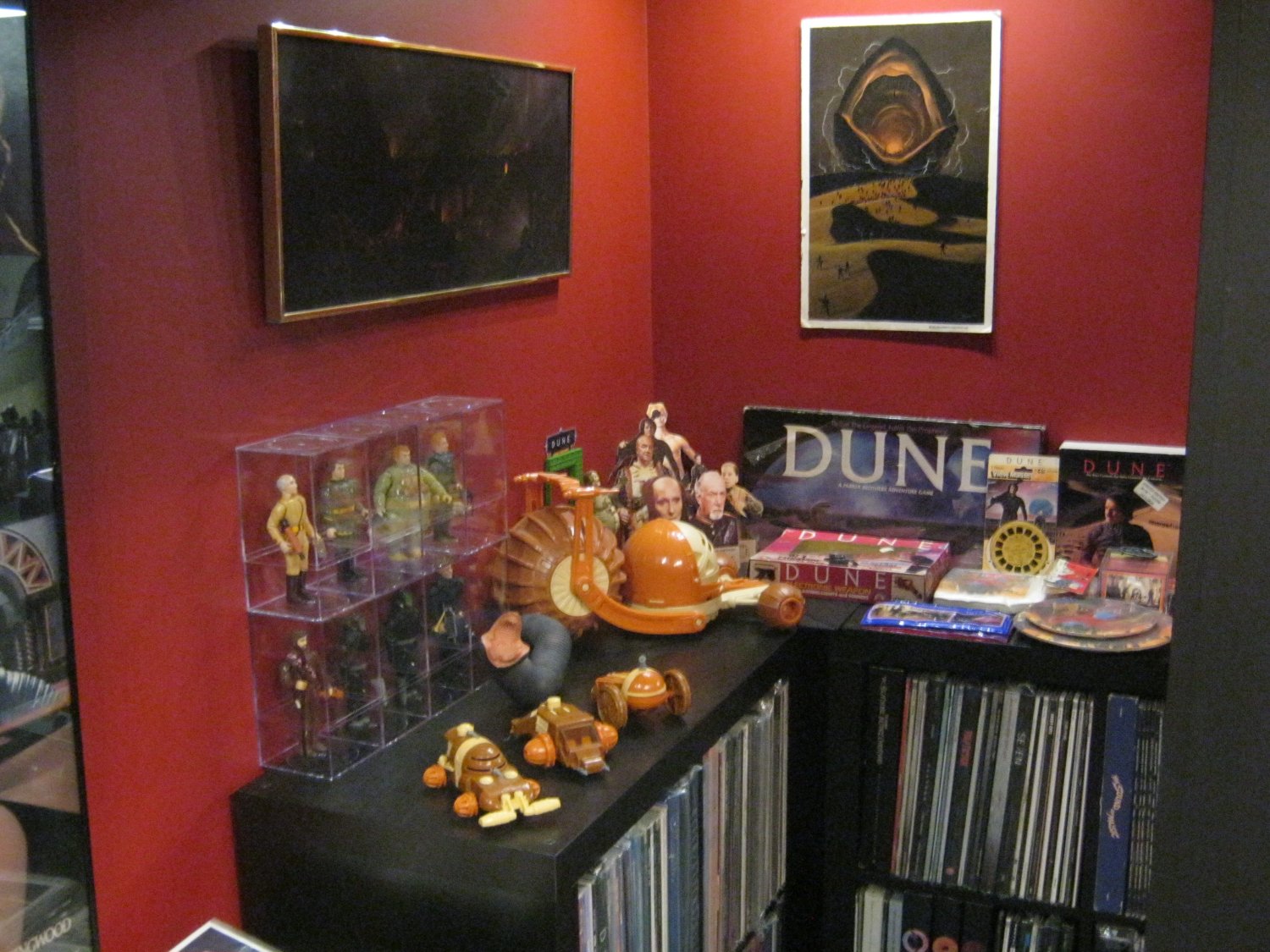 Tell us about some of the things you collect.