Isn’t it about time for another contest around here? It sure is! Thanks to the generosity of Universal Studios Home Entertainment, we have two copies of ‘The Adjustment Bureau’ on Blu-ray to give away to our readers. How do you win? Read on to find out.

For this contest, two lucky winners will each receive one Blu-ray + DVD Combo Pack copy of ‘The Adjustment Bureau‘ starring Matt Damon and Emily Blunt. Here’s the studio boilerplate:

A rising politician finds himself caught up in a pulse-pounding, mind-bending conspiracy in The Adjustment Bureau, the acclaimed film coming to Blu-ray™ Combo Pack and DVD on June 21, 2011 from Universal Studios Home Entertainment. Academy Award® winner Matt Damon (the Bourne series, True Grit) and Golden Globe® winner Emily Blunt (The Devil Wears Prada, The Wolfman) are the star-crossed lovers chased by mysterious forces that threaten to destroy their futures unless they abandon one another. Deleted and extended scenes, filmmaker commentary and exclusive bonus features offer behind-the-scenes looks at the making of the film. Plus, for a limited time only, the Blu-ray™ Combo Pack of The Adjustment Bureau includes a downloadable digital copy of the film that can be viewed anytime, anywhere, on an array of digital devices. 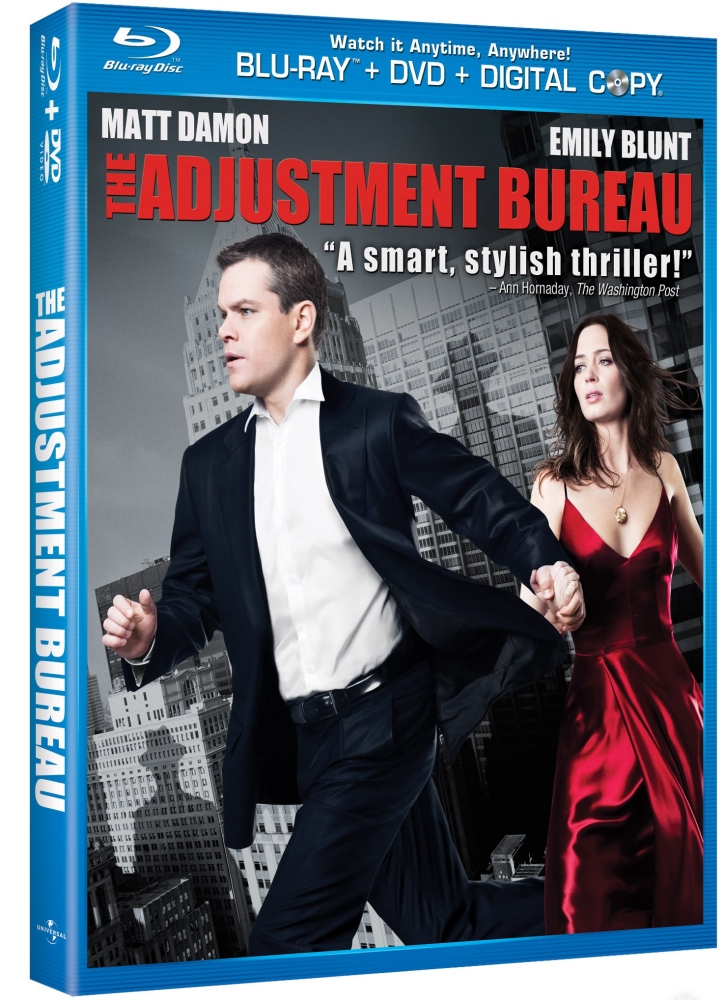 The theme of this contest is adjustments. For your chance to win, we want you to post in the Comments section below your answer to this question: What one element or aspect of an existing movie do you wish you could adjust? Even the best of movies typically have something wrong with them. Maybe it’s a miscast actor, or a bad musical score, or shoddy visual effects, or just one bad scene that stands out and derails an otherwise good movie. If you had the power to go back in time and alter the course of one movie, what would you fix?

For example: If I had this power, I’d like to replace Keanu Reeeves in ‘Bram Stoker’s Dracula‘ with… I don’t know… anybody, really. Reeves is terribly miscast in that movie, and his wooden performance stands out badly among an otherwise stellar cast. How about we take Carey Elwes (who has another part in the movie now) and put him in the Jonathan Harker role, and then grab Tim Roth and put him in the smaller role that Elwes currently plays? That would do. That’s what I would fix.

I’ll allow up to three entries per person, but please keep them short. (Less than 200 words would be good.)