CES 2016 is done and in the books, but damn if I haven't come down from that new tech high. I've already talked about some highlights here and here, but there is more. More Star Wars, more VR, more incredible sound systems, and more peeks into the future of accessible tech. 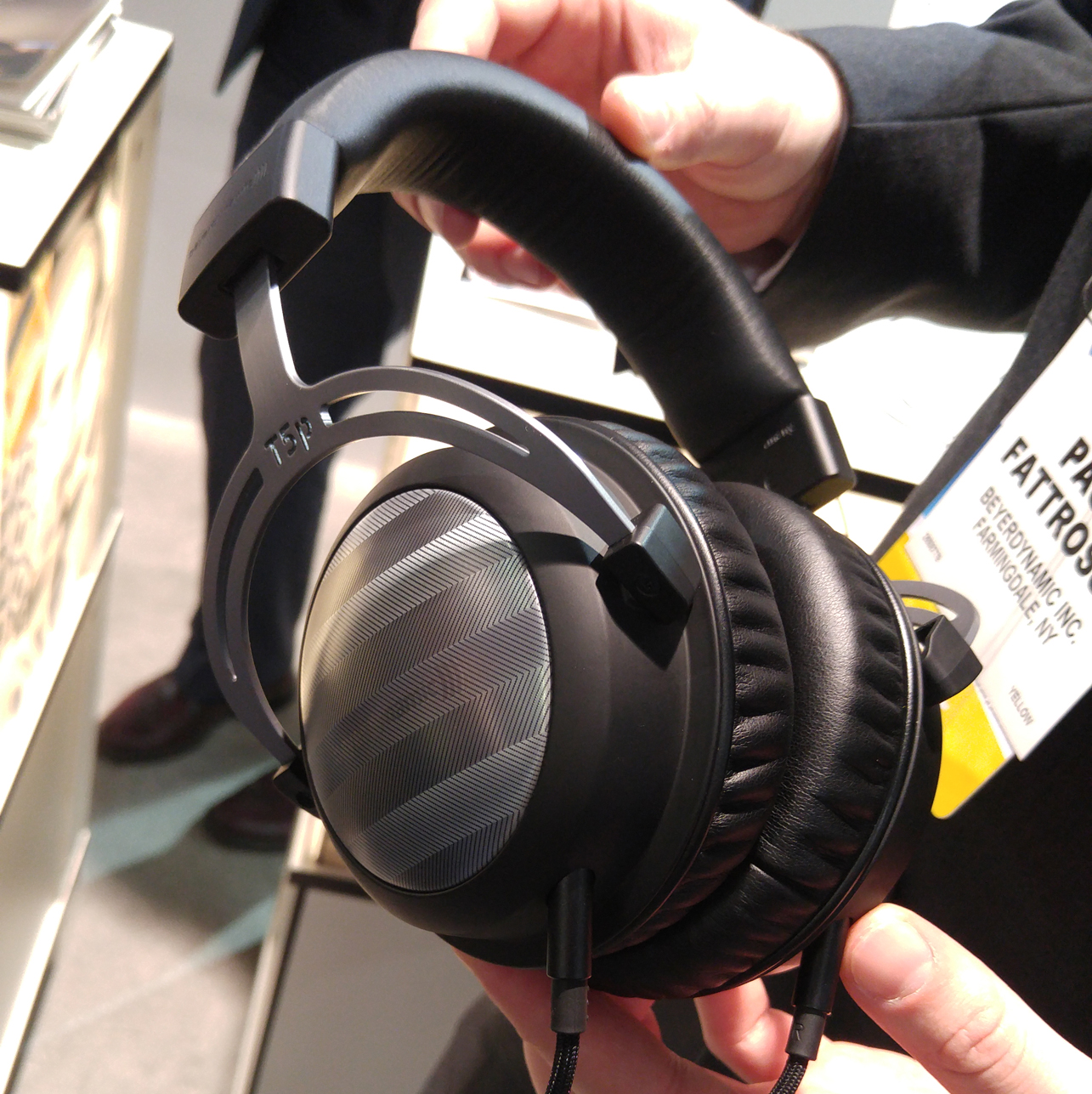 A refresh of a 5-year old design? That's not what people want to see at CES, so why I am highlighting the beyerdynamic T5p Second Generation? It's simple really. Over the course of the week, I tried and used around two dozen different headphones and headsets across all kinds of design extremes. Of every headphone I tried and saw, it was only the new T5p that I instantly wanted to whisk back to the hotel room for a long private demonstration. (To be clear, I kept this desire to myself.) But again, why the instant infatuation? Even at CES, the T5p was low-key, and beyerdynamic had the new T1 on hand to serve as the flagship example of their Tesla transducer-based sound. The T1 of course is open and, requires plenty of power, and no doubt, coupled with the A2 amp, is refined indulgence.

And yet, while shuffling around Vegas for a week from meeting to meeting, to event, to meals, to writing, and to sleep without stopping, coming face-to-face with the highly efficient, closed T5p, left me with a soothing resonance in the midst of frenetic activity. Audiophiles and would-be audiophiles want equipment that is waiting at home, ready for those cerebral moments of calm, distraction-free listening. At the same time, everyone, even audiophiles, needs a headset that can pull road warrior duty. This T5p can do both.

With the new T5p, the sonic signature has been further refined (much to my liking), and a detachable cable design gives the user some badly-needed options. Considerable effort has been put into giving the headset an open feel in terms of sound, and this is appreciated. Right off, the new T5p should be a strong candidate for any user's first dance with beyerdynamic's Tesla technology; especially as the T5p allows for a large variety of amp options. Finally, along with the T1 and DT 770, I think this dual-function product offering is a good sign of what we can expect from beyerdynamic in the future. 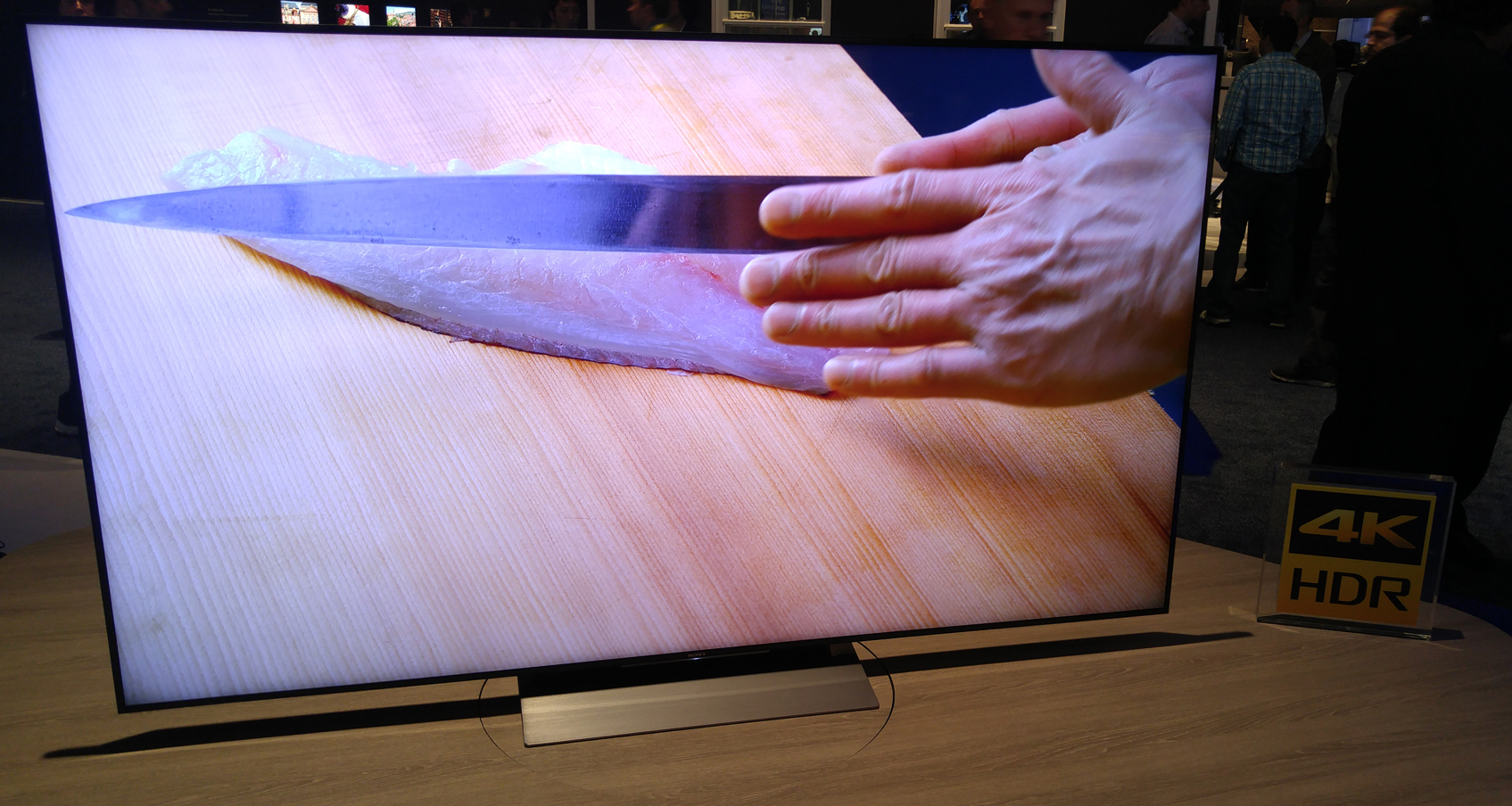 We are in a different era, wherein Sony is comfortable announcing a few products at a time, and even taking a laissez-faire, wait and see approach to things such as Atmos and Ultra HD Blu-ray. And yet, the X93D series TV, which has been introduced as the hallmark of Sony's 4K HDR branding, was a stunner at the show. The set itself bears an impressive less is more approach to not just the bezel but the whole body of the TV. This extends to the thinness and the cable routing system, but more than that, the TV has a friendly shape which can be reduced to three strokes. 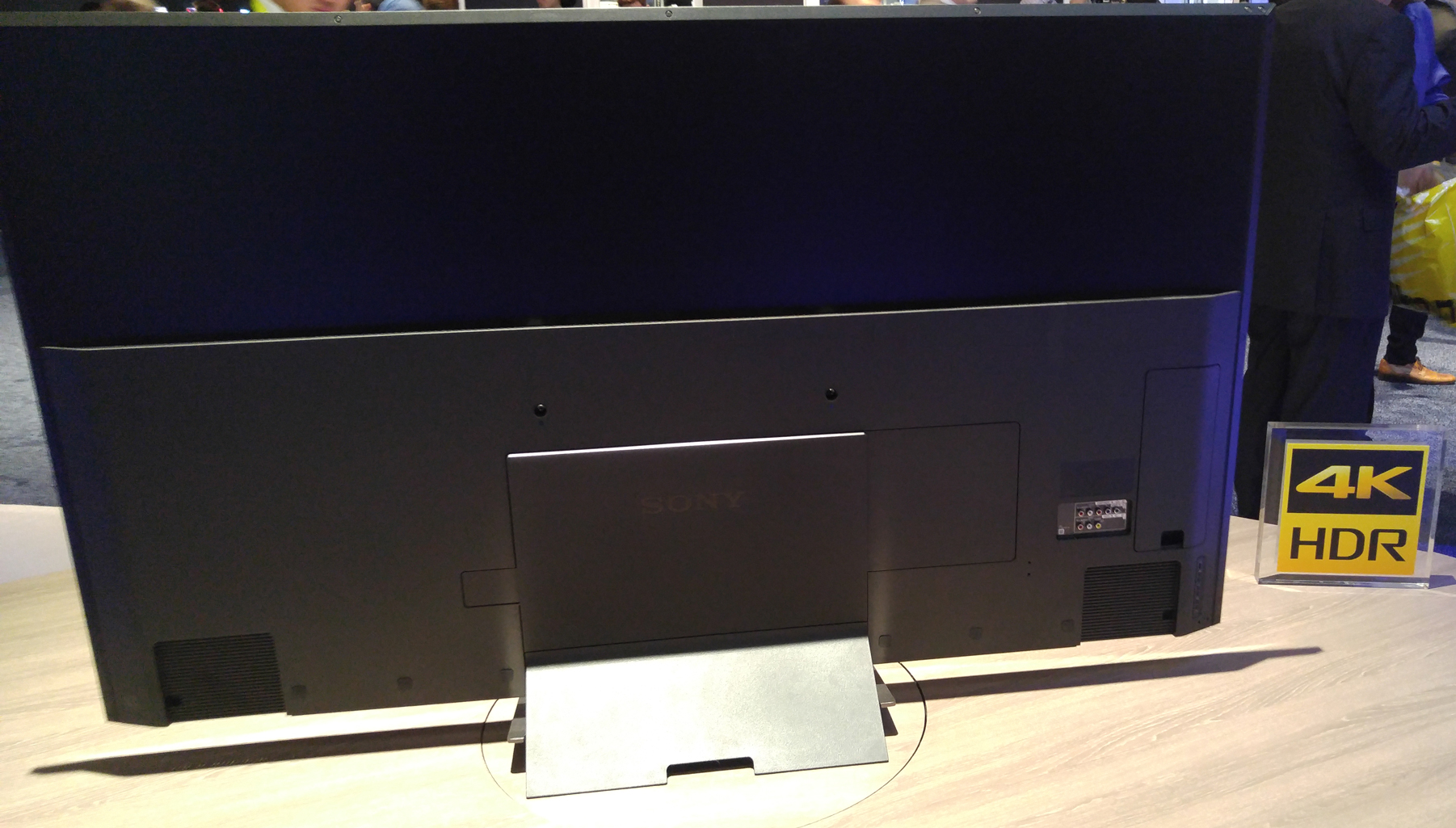 I'm almost shocked to say this, but Sony has made strides with backlighting. 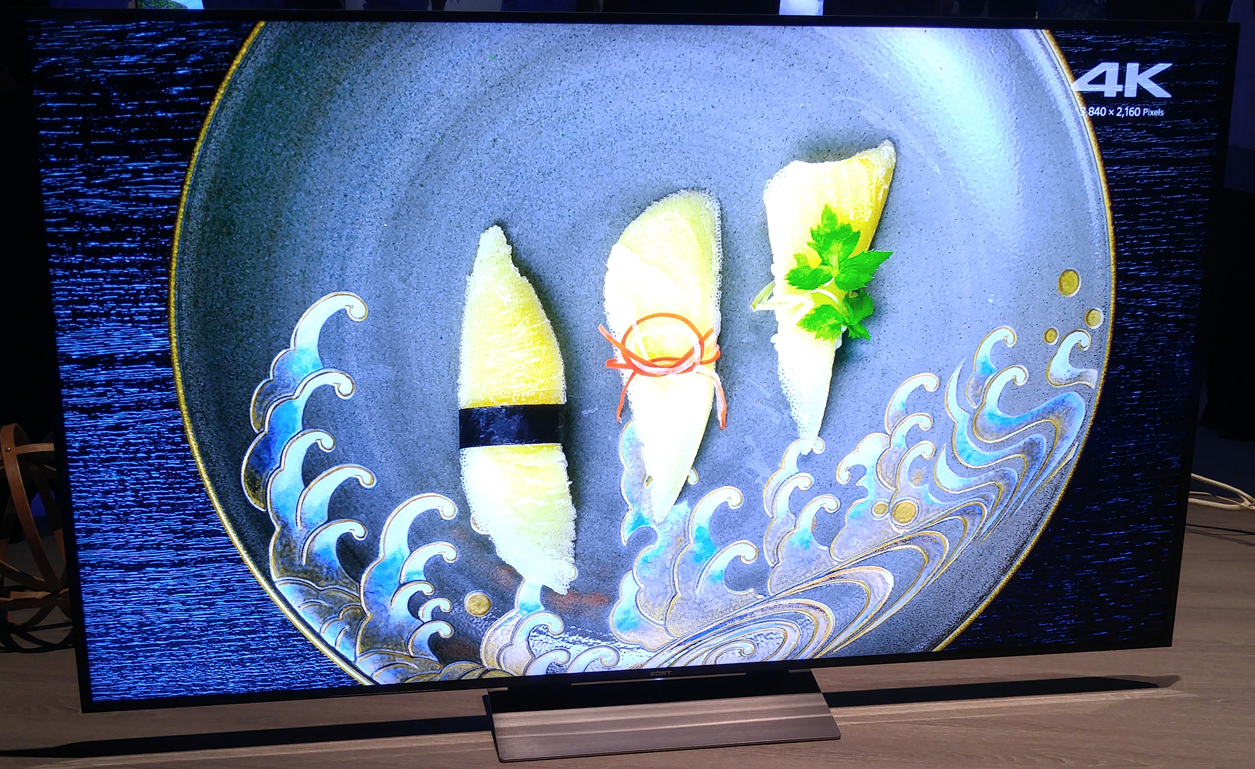 Even without considering price, this X93D series is dramatically more palatable than both the XBR-75X940C and the XBR75X850C. As much as I would prefer to do my own intensive contrast testing, I've seen enough to know that this particular series is a winner. It will sell big, and owners will be happy. 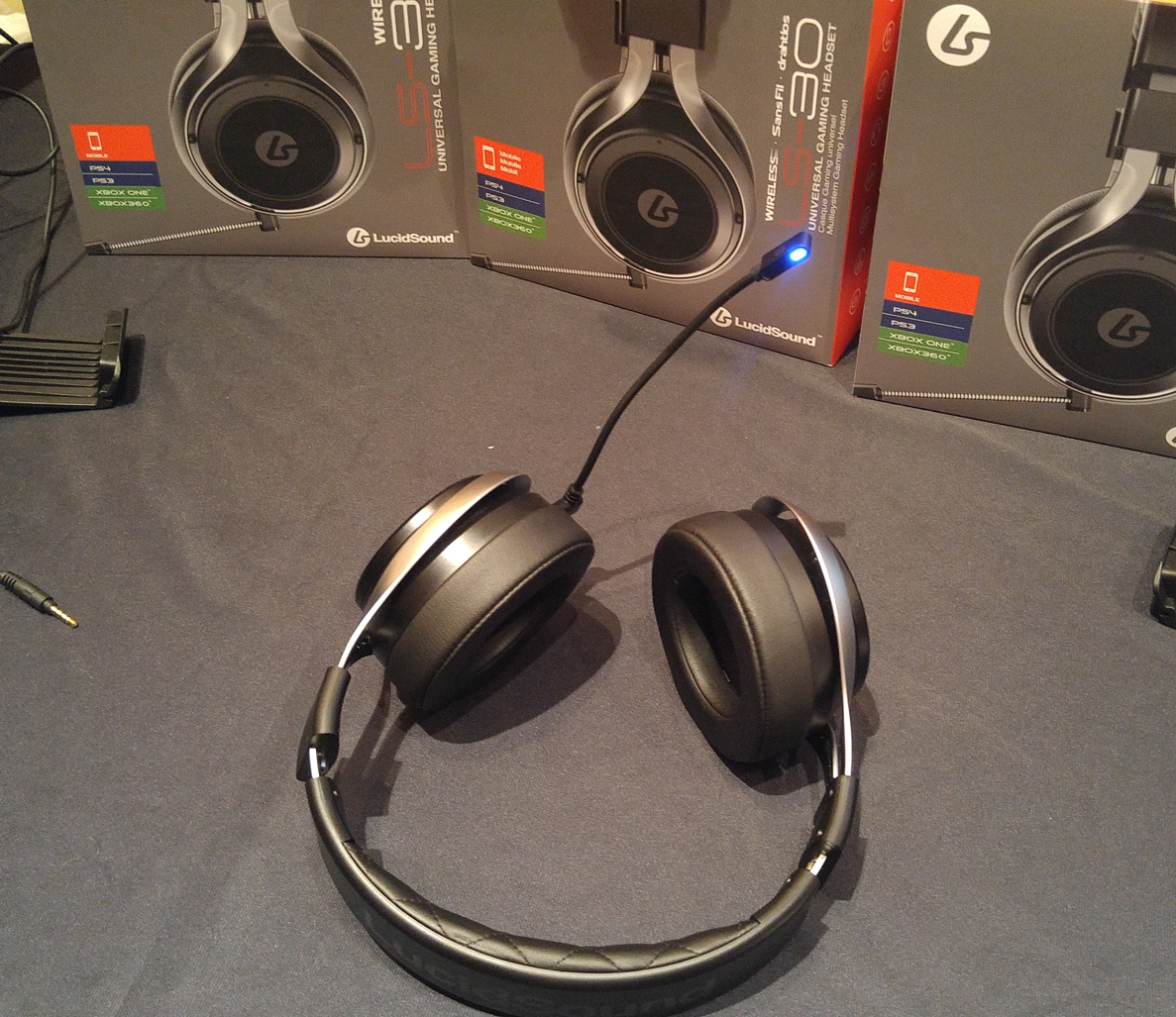 Some of the guys behind Tritton are at it again with the LucidSound LS-30. This is a wireless gaming headset that has several important features that I look for. It uses the PS4 and Xbox One's optical ports to get both high quality sound and independent game volume and chat volume controls. It's rechargeable and powered, but it also works passively for mobile use and even has a built-in mic for on the go. I particularly like that it works wirelessly with both PlayStation and Xbox systems (even the 360). Beyond that, it has a nice, non-gamer look to it, and the two volume controls have been made into easy to use volume wheels that circle the outer section of each can. Finally, my favorite feature is in the removable boom mic. The LS-30 has a top-facing blue LED that lights up whenever the mic is muted. Thus, if you are wondering if the mic is live, just glance down. 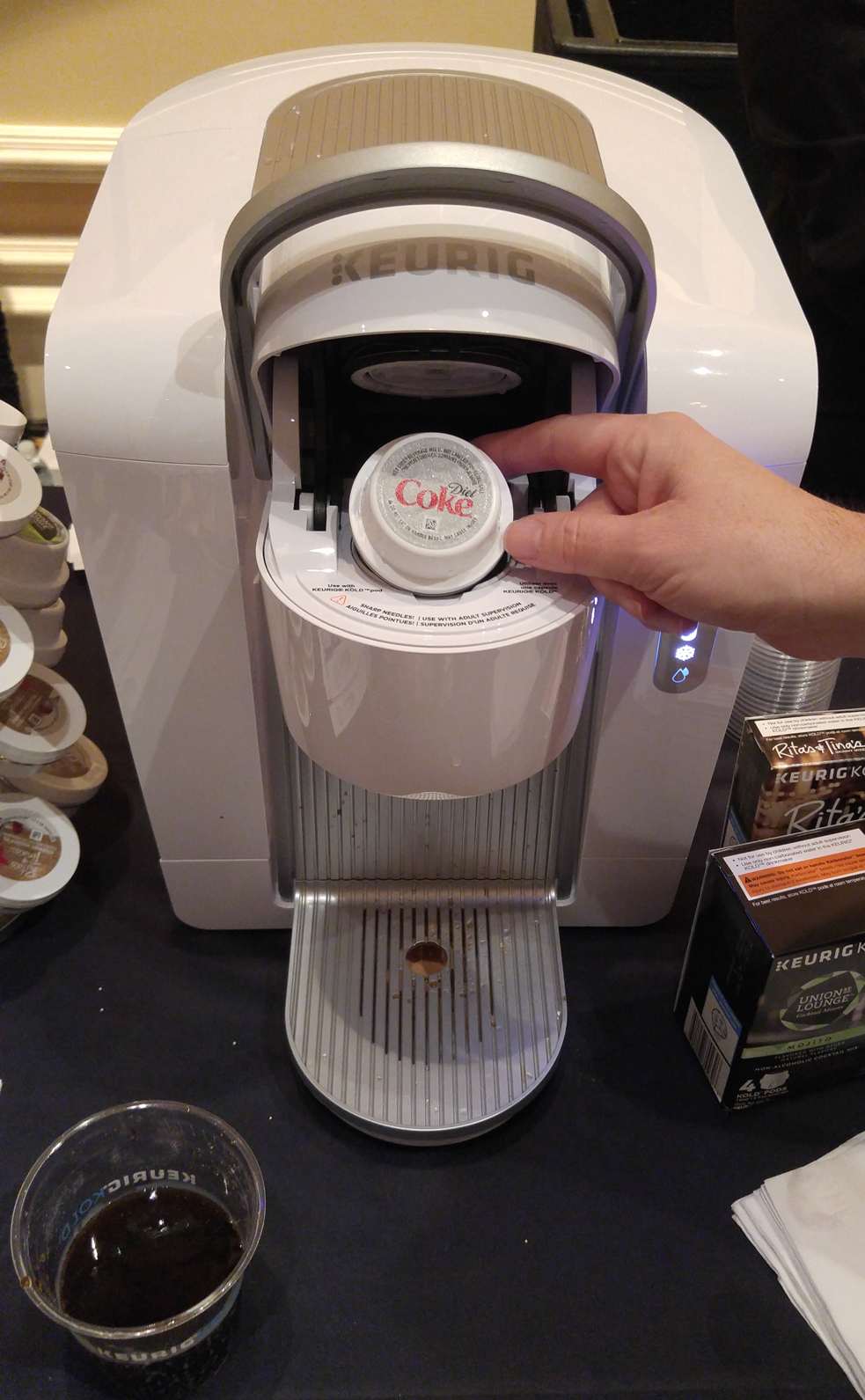 I'm going way off my CES 2016 focus here, but that should tell you something. The Keurig KOLD is a pod-based on-demand cold drink system. While it can make some fun things like Mojito mix, the key for me is soda, and more to the point, Coke products. As a soda-drinker for life, I'm often amazed at how lousy the everyday soda fountain is. Even some fancy new designs still can't get that mix of water, carbonation, and flavor right. (Don't even get me started on those wretched soda guns they use in bars.) Even worse, I've seen all kinds of terrible home solutions. Whether it's with seltzer or CO2 cartridges, the results and hassle just haven't worked well. 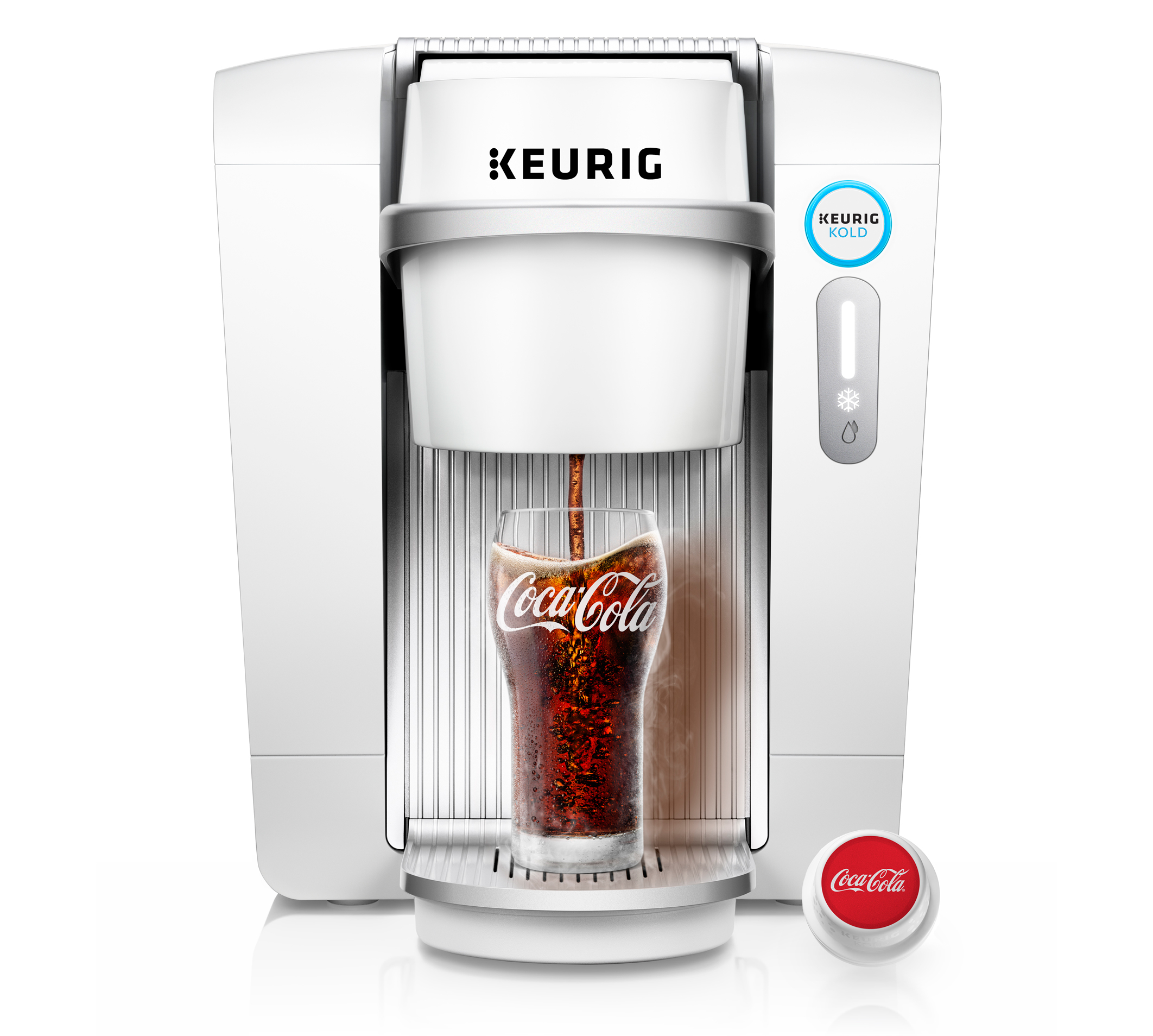 The Keurig KOLD does away with all of that fail with some very Keurig-like thinking. For one thing, the carbonation comes in with the soda pod. It doesn't touch liquid until it's time. Equally as smart, the little machine instantly makes water cold when the drink is made. When the 8oz. of soda is being created before your eyes, it's all being combined with Keurig precession. Based off of the Diet Coke I had, it was perfect, I wouldn't change a thing. It was fresh, fizzy, and cold, but not too cold. It didn't need ice, and the flavoring was exact. No matter how niche it seems, I expect the Keurig KOLD to take over offices in the next few years, and in some cases, homes. 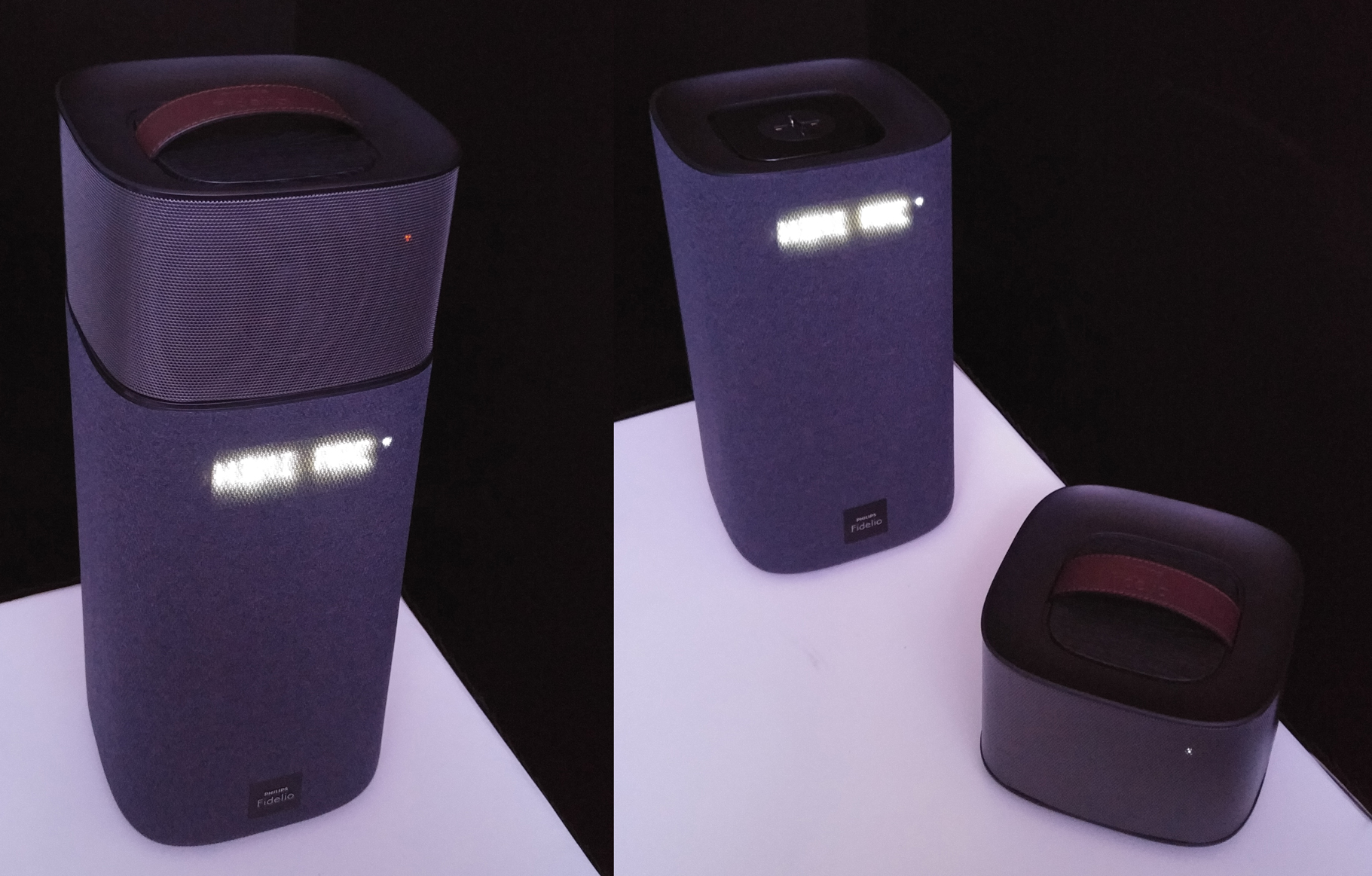 I've already said that the diminutive Philips Fidelio Atmos Soundbar was not demoed well. What Philips did demo well was the Fidelio E6. The E6 is one of Philip's designs which feature a transforming, multi-purpose speaker array. That probably sounds complicated, but it's meant to be easy to use and attractive for those who want to have home theater surround sound but without running speaker wires. The system consists of a sub unit and small left and right tower speakers. The thinking is that during most of the week, proper movie watching (or other surround format listening) is not possible. But when movie night comes, the two top modules on the left and right towers can be detached and placed as the back surround left and right. These surround speakers are wireless and have a ten hour battery life, and they are charged whenever they are back in place on top of the towers. These little satellites have leather carry handles, and they double as Bluetooth speakers.

This might sound counterproductive to always have to deploy surround speakers, but it means that the user doesn't have to dedicate space to the two surrounds. When deploying, the user first places a satellite in the ideal listening position (like the middle of the couch), and then hits calibrate on the remote. After that, the two satellites go to their temporary surround spots, and the user hits calibrate again. After that, it's time to enjoy surround sound. Philips has been using this design in Europe for a while, but this new E6 version has another smart feature. The astute reader will have concluded that two mini towers, two satellites, and a sub make for 4.1 surround sound, but there is a wrinkle. In lieu of a center speaker, the E6 has two special drivers in the mini towers that project sound towards the center channel spot. The E6 then is a 5.1 solution that helps with both tricky surround and center issues. Overall, it's a stylish package, and a welcome alternative to the typical speaker bar.

The E6 supports Google Cast and Spotify as well, and I have to think that the satellites' combination Bluetooth/wireless offering would fit in well with some families. It's not a system that I would trade one of my home theater set-ups for, but for friends and family who struggle with the idea of running a speaker wire across the living room/den (typically, even wireless speakers require power cables), the Fidelio E6 removes just about any excuse.

Glancing at my shortlist of highlights, and I have plenty left to share. More VR, a luxury sounding car, and a memorable phone are just some of what's to come.