We had a deal.

Here in Sin City, it's become quite clear to me that CES 2016 has become a playground, one that is full of beautiful displays and damn near wireless everything. As I continue presenting my highlights from the show, I'm still struck by the plethora of amazing home theater options that have been realized here. I can't see it all, but I will be seeing more tomorrow. In the meantime, let's continue to talk about not just amazing things at CES 2016, but real products that to one degree or another ought to come under actual purchase consideration. 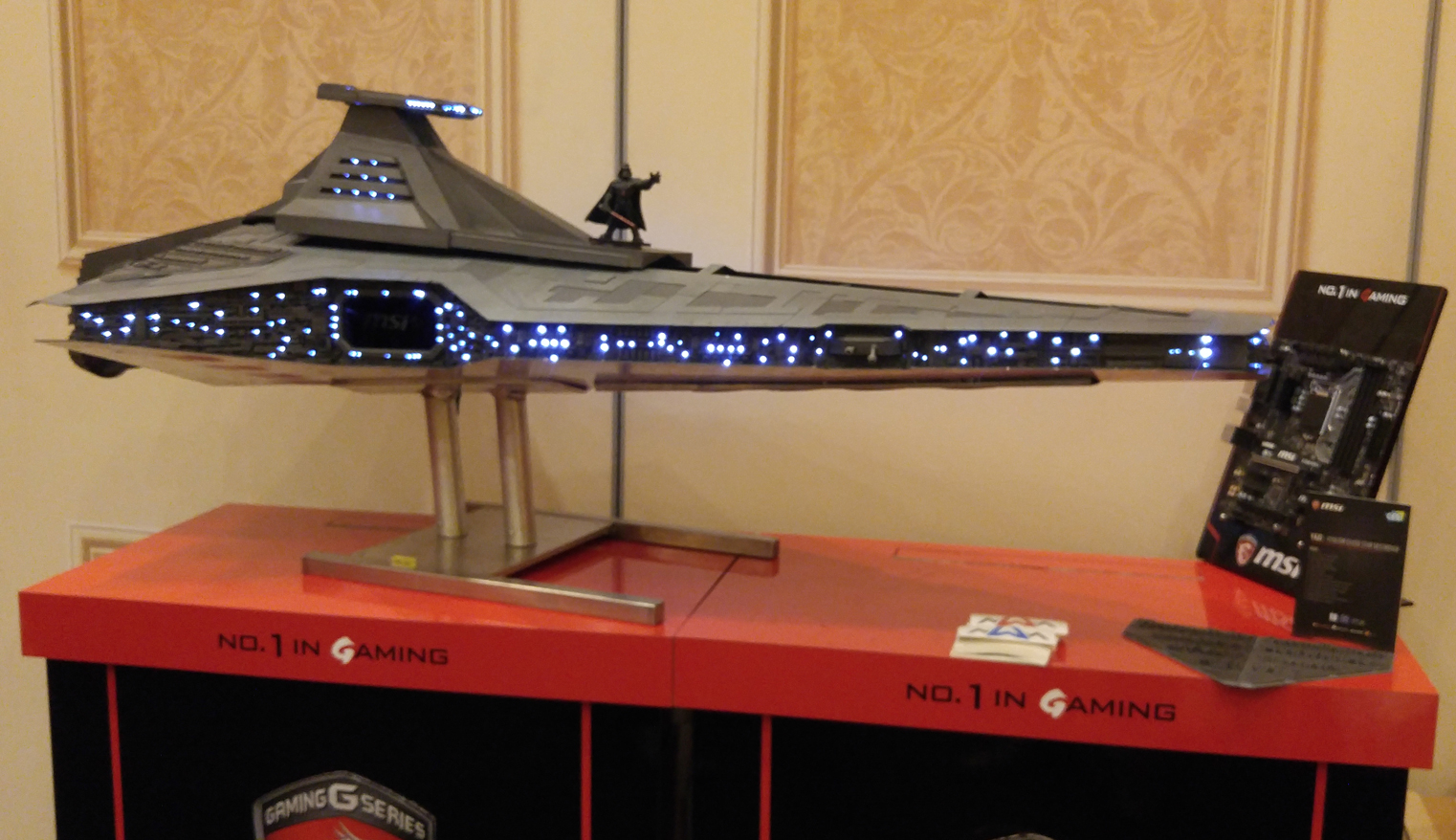 When I mentioned accessible, affordable, and attainable products, I was definitely not talking about the custom laser aluminum Star Destroyer PC case mod. It's currently being shown behind closed doors by MSI, and indeed the hardware that can be spied at its heart is MSI. But this stunning work, which can't be done justice in pictures, is a competitive build from the community. Before anyone gets too worried about what will happen to this dark ark after the show, my understanding is that it will be joining its new owner who elected to purchase via some big private bucks. You could say this is just a case mod, or just another example of fan-made 'Star Wars' stuff, but when you look at each facet up close, and then again move back and see how the lights mark the outline, you'll know that this beast will still be awing in 50 years' time.

Not far from the Star Destroyer is a phalanx of kitted out PCs assembled by various important MSI partners like Origin and ABS. They even have a Pro shaking, twin card, silently cooled Vortex. And yet, while MSI had several sexy gaming PCs, notebooks, and PC components spread throughout the room, one item in particular really spoke to me. It was in fact, an All-in-One PC. If you know what an All-in-One is, then you would expect that a decent sized display like 27" had been surrounded by laptop parts and a normal mouse keyboard to make some kind of un-upgradable and ultimately disposable PC with a small foot print. Right -- but not this time. The MSI Gaming 27XT 6QE not only features a 144 khz touch display, but it also has a i7-6700 desktop class processor. What it doesn't have is a built-in video card. Instead, the rear module houses a slot ready for any serious card, even a Titan X. With a card in place, the HDMI in and twin Display Port out become pretty nice bonus features. Thus, this all-in-one has a serious processor, display, upgradable hard drive, RAM, and full-on video card. Its existence is in complete defiance of the all-in-one concept. 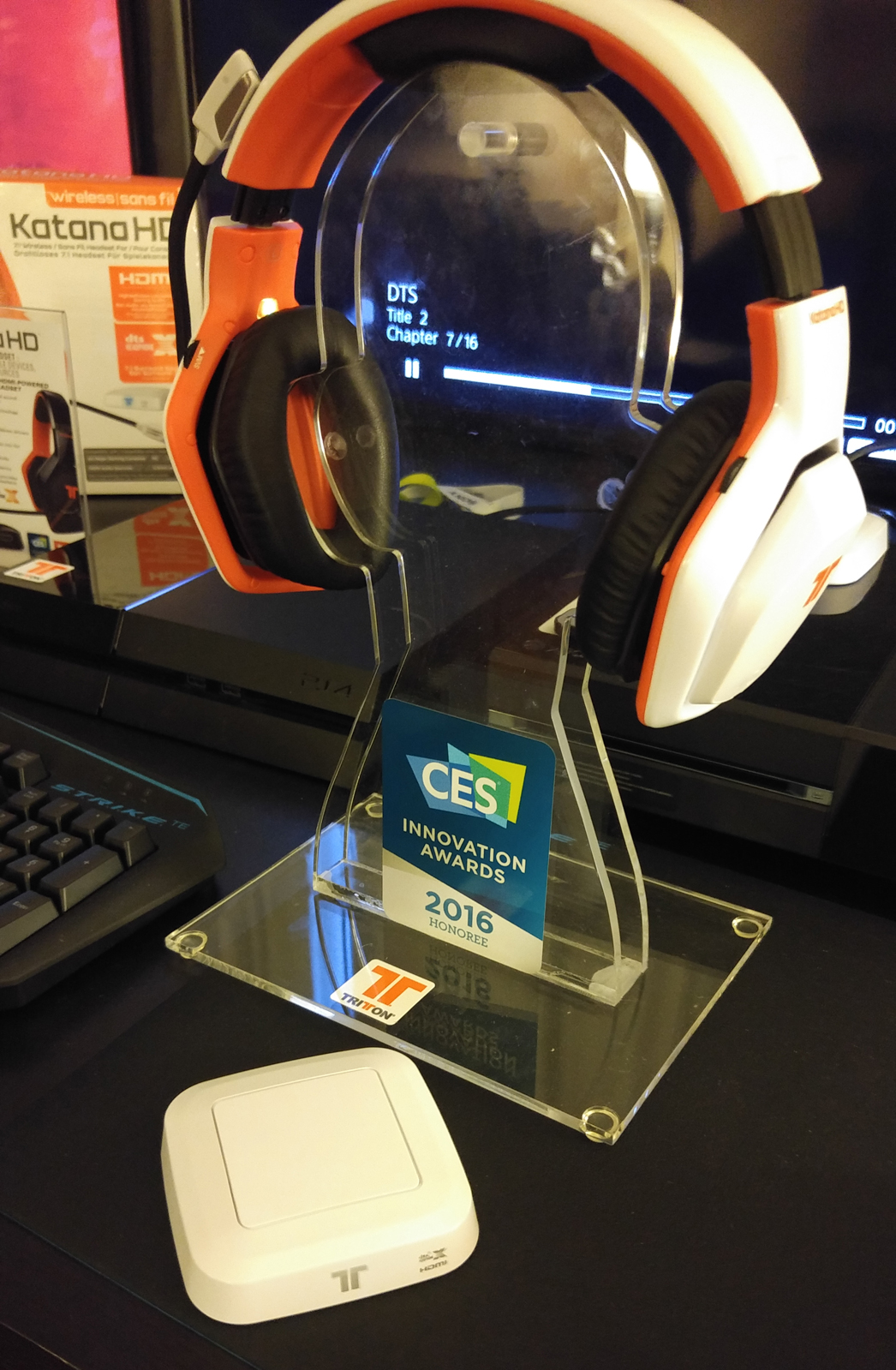 Yesterday, I was teasing the 2016 DTS Demo Disc, and today, I got to hear it through the Mad Catz Tritton Katana HD Wireless. We're talking about 'Gravity' in DTS:X uncompressed coming to the wireless base station via an HDMI 1.4a pass-through and transmitted in 2.4Ghz to the Katana HD headset. (DTS:X virtual surround sound that is.) This is a wireless gaming headset, but it's also the only way in the world that I know of to get Blu-ray quality audio to a wireless headset. On top of that, the two driver reproduction has been designed with DTS:X 7.1 surround sound in mind.

One big key to this HDMI passthrough -- it works even when the headset is off.

The Katana HD set I used isn't quite the final build, so I'm not ready to swear to its audio quality. Having the pre-prod in my hands, however, has me looking towards the March launch with heavy anticipation. The comfort level seemed good, and the headset is frankly nicer to hold and wear than to look at. I have little doubt that this is the wireless headset of 2016 to watch and consider for both gaming and for watching Blu-ray quality movies. Having both the 2016 and 2015 DTS demo discs on-hand was just a wonderful excuse to exercise the Katana HD. 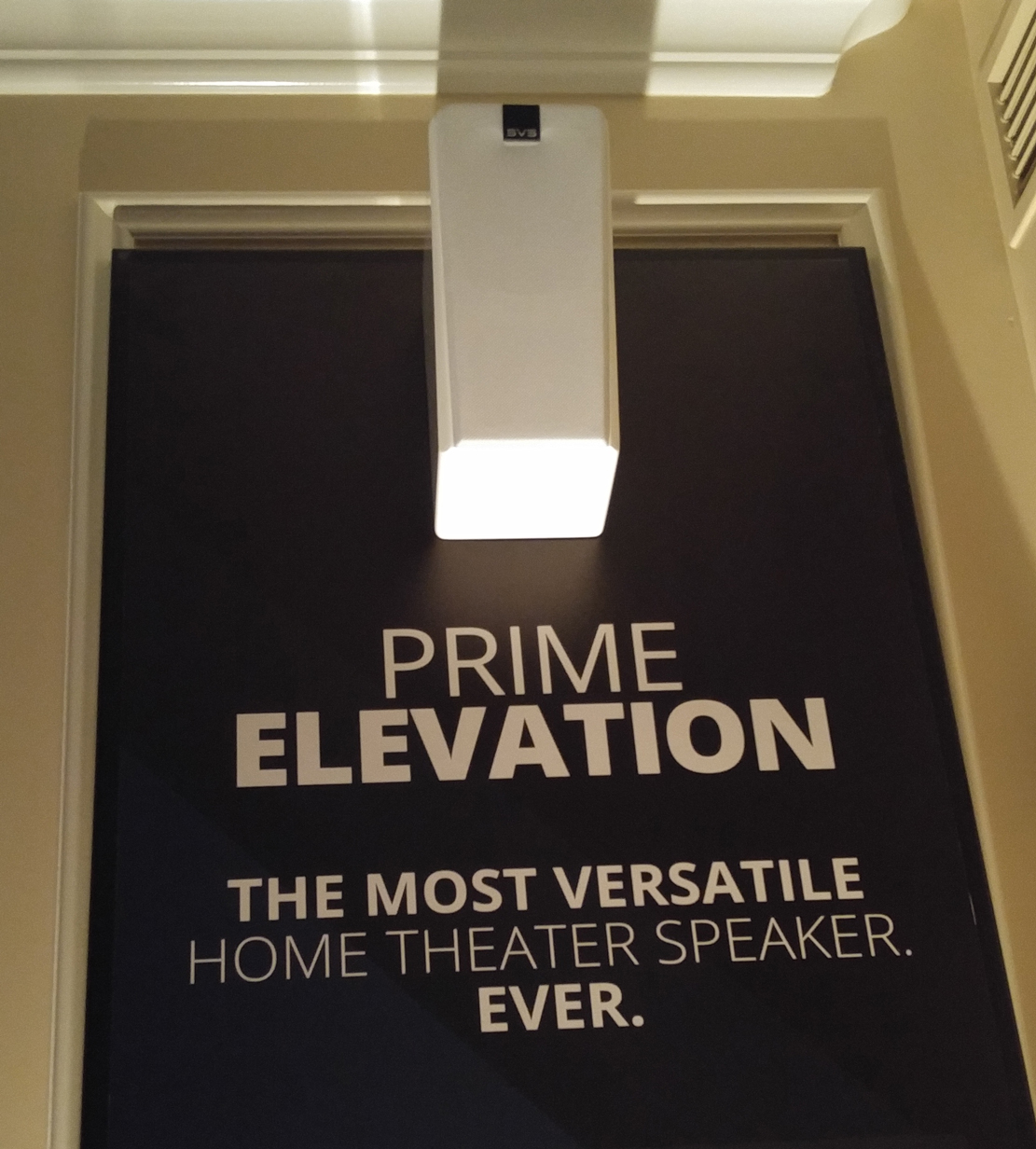 While I continue to be impressed with the strides being made in wireless home theater, I have no plans to pull up any speaker wires in my main home theater. Today, in concord with a 5.4 channel SVS Ultra set-up, I listened to two Prime Elevation speakers produce their Atmos-sourced signal from high up on the walls to the left and right of the main listening position. With the Prime Elevation, SVS figures that users can choose exactly how to add in the immersive sound formats. High up on the wall is ideal, and loads more practical than directly overhead, but Atmos bounce style is supported in the very same speaker. Much of what makes the Prime Elevation is shared with the Prime Satellite, which I'm on record as loving, but with a different enclosure. The screen even has a magnetic logo to accommodate the speaker's versatile functionality and positioning ability. Here I heard Furiosa attempt to trade gas for a covered escape, fail, and then be left with the other motley war rig occupants to fight their way out. I also heard the pounding heart beat resulting from Bullock and Clooney's extended spacewalk. I can't wait to hear more. 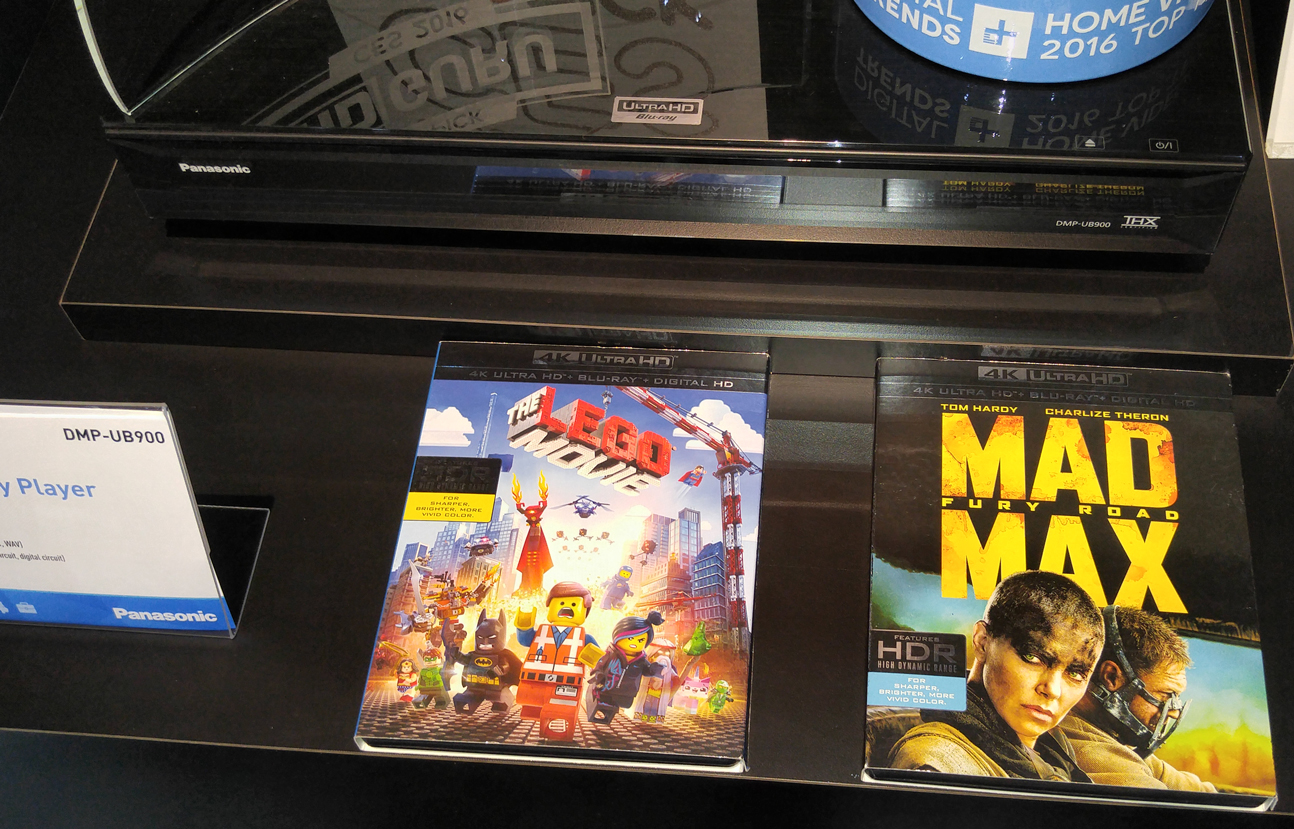 Without even having to exaggerate, I could do an entire CES 2016 highlight article with just what Panasonic has brought to the show. For now, I'll restrict my description to two products, the Ultra HD Blu-ray player, and the TX-65CZ950 OLED 65" 4K HDR display. Have you seen 'Mad Max: Fury Road' in Ultra HD Premium? Well I have, at least part of it. I've been hearing rumors about this presentation since at least last summer. I think it's safe to say that our readers here are fans of the film, and have gotten to know its sights and sounds well. But within that world there is even more to experience visually and that is thanks to HDR playback. I expect side-by-sides of this footage to find its way into places like Best Buy. That is, if the HDR push felt here makes it to the consumer level in full force. 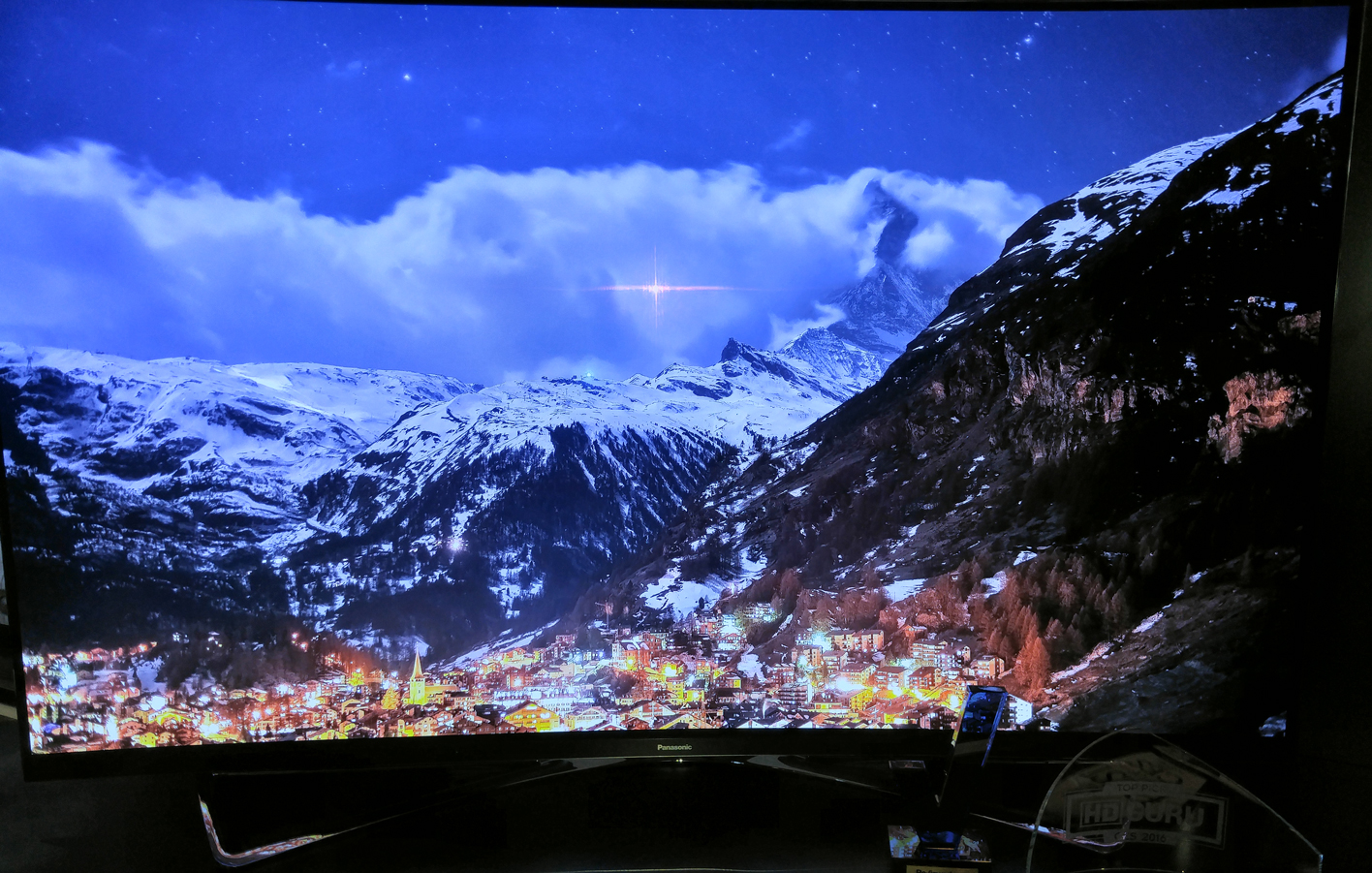 Now for the TX-65CZ950. Without trying to put down any other new TV this year, including the lovely DX900, the gently curved, ink black, and luminescent OLED display presents both color and fine detail (even in the show environment) to a standard that will make many prospective buyers want to throw their current display down a flight of stairs. 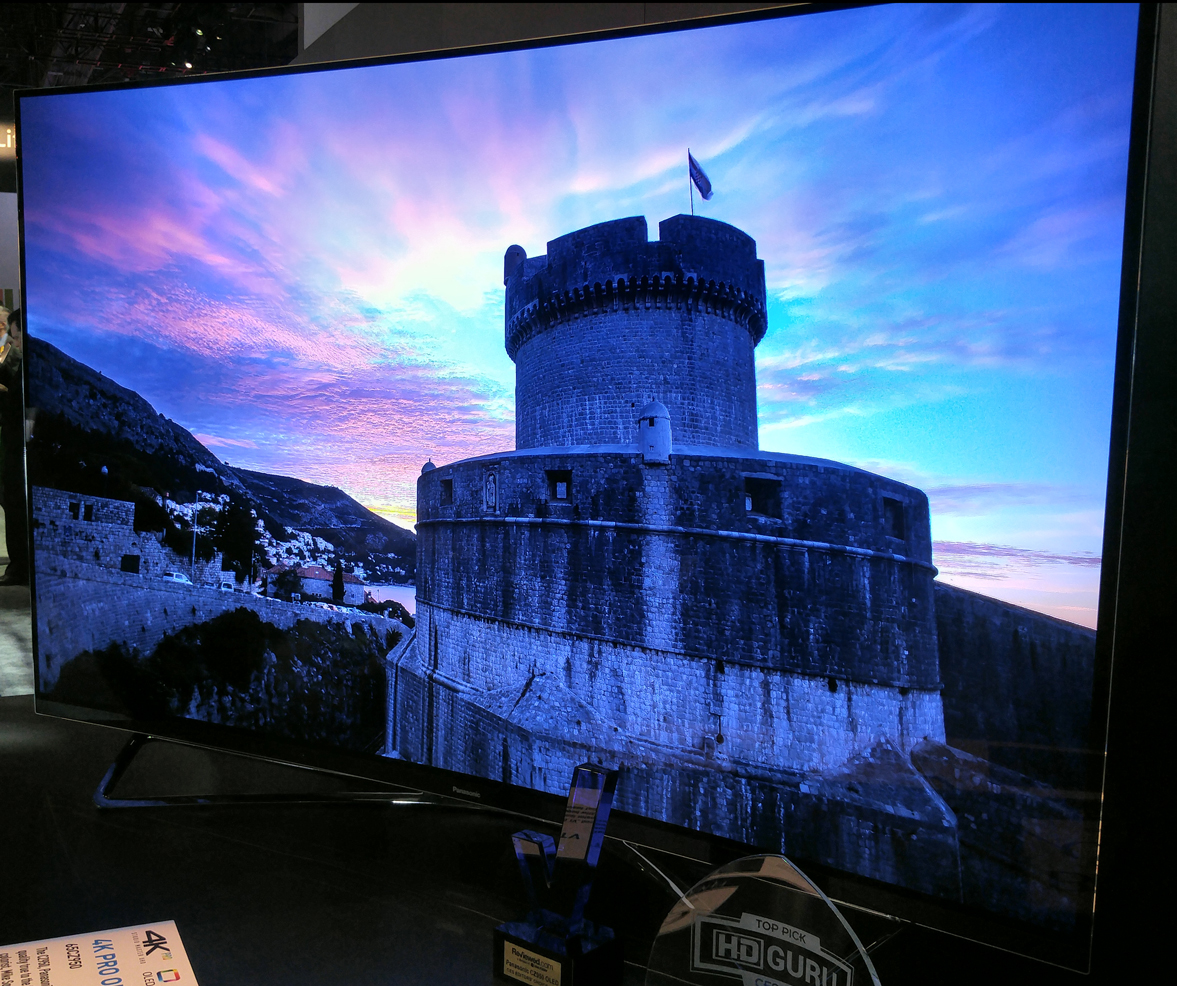 Once more, I must try to get a little rest. Stay tuned for more tales of CES 2016 wonder; did I mention my trip to Aperture Science?