THEY WILL RISE TO SUCK THE BLOOD OF THE LIVING!

An abandoned boat in New York Harbour unleashes a deadly flesh crazed Zombie cargo… A Young American woman and a journalist investigate a tropical island where a deadly disease is making the dead walk… Soon, thoughts of getting to the bottom of the murderous curse will be forgotten, as Fulci’s walking corpses overwhelm the living and reports come in that the Big Apple is swarming with the living dead…

After over thirty years, Zombie Flesh Eaters still has the power to shock and offend the unwilling… Check out this classic ‘sadist video’ and revel in a wonderfully offensive movie that once helped usher in a moral panic!

The SteelBook features limited edition artwork by Graham Humphreys. The zombie fan in me is seriously considering ordering this one. Here’s a closer look. (Click the image below to enlarge.) 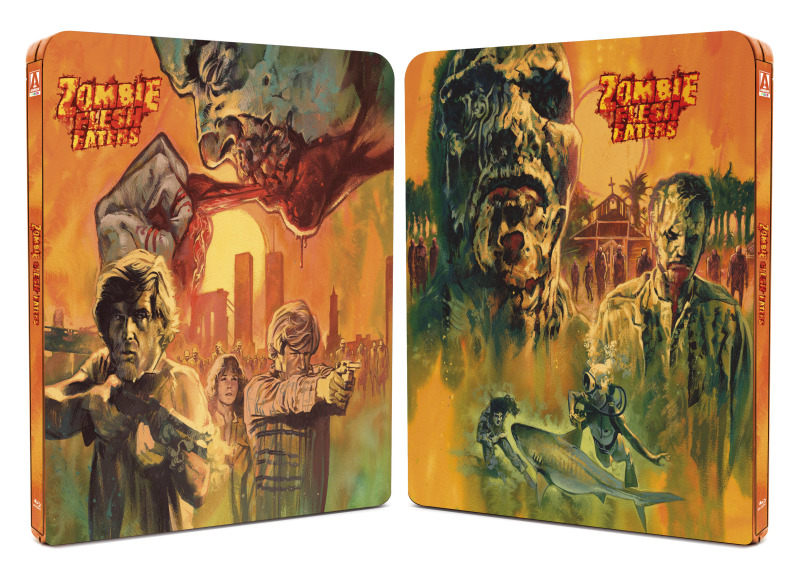 Supplements for this particular release will include:

The ‘Zombie Flesh Eaters’ SteelBook packaging release will be available on November 26th. The Blu-ray is apparently region-free. However, the press materials also mention PAL, so note that the disc still may not play properly on North American equipment. This SteelBook can be pre-ordered directly from Arrow Video for £17.99 (approximately $28 USD).