James Franco’s new bio-pic ‘The Disaster Artist’ celebrates one of the most infamous “So bad it’s good” movies ever made. In that spirit, what are some of your other guilty pleasure bad movies that you can’t help loving?

I’m a huge Superman fan, so I’ve probably watched ‘Superman IV: The Quest for Peace‘ more than some of the people involved with the movie itself.

A horrible miscalculation by all involved, it’s hard to figure out what’s worse, the movie’s incomprehensible plotting or its awful F/X. The movie has Superman (Chris Reeve, in his final appearance as the character) addressing the nuclear arms race, which almost certainly must have sounded like a good idea, but the screenplay (if there ever was one) fumbles the concept and has the film’s best scene – Superman addressing the U.N. and declaring that he’s getting rid of Earth’s nuclear weapons – near the beginning of the movie, when it would have worked much better as the conclusion.

I hope Gene Hackman got a nice check for reprising his role as Lex Luthor, because he’s totally wasted here, given a moronic nephew (Jon Cryer) and an equally idiotic super-villain creation, Nuclear Man (Mark Pillow), to deal with. The movie only gives Hackman a couple scenes with Reeve, which is a true disgrace.

After being absent for all but a couple short scenes in ‘Superman III’, Margot Kidder returns as Lois Lane, but the movie doesn’t know what to do with her either, so it repeats the ‘Superman II’ storyline of Lois discovering who Superman is, only to fly around the world with him and then once again get a super-kiss that results in her forgetting everything.

Still, I can’t help watching ‘Superman IV’ every time I revisit the original films. To me, it had its heart in the right place but could never figure out a second or third act for its original premise, and the actors involved probably had no idea how awful the visuals would turn out.

I don’t know of any bad movies more fun to watch than 1983’s ‘Yor, the Hunter from the Future‘. This movie has everything: action, adventure, romance, cavewomen, spacemen, dinosaurs, robots, a well-greased Reb Brown (in his Razzie-nominated role), and one of the cheesiest yet catchiest title intros you’ll ever hear. I’m not kidding, this song is a thing of absolute wonder and is sure to get stuck in your head:

Fact: ‘Yor, the Hunter from the Future’ will actually hit Blu-ray soon, and oh yes, it will be mine.

With a rotten 19% score (out of 157 reviews), I’m going with Cameron Crowe’s disasterpiece ‘Aloha‘. I am fully aware of how much hateful criticism the film has received. I’m also fully aware of how messy it is. I understand the criticisms and I can’t even argue that they’re not valid because I absolutely agree with them. Even so, I see two things in ‘Aloha’ that only 19% of the critics tracked on Rotten Tomatoes saw:

1. The studio screwed it up. Now, you may say, “Luke, the studio didn’t screw up ‘Vanilla Sky’ or ‘Elizabethtown’, so what makes you think Cameron Crowe didn’t simply make another bad movie?” My first response would be, “You’re crazy. Both of those are excellent films!” And my second response, which would actually answer your question, would be: “Because Sony’s leaked emails show that Amy Pascal hated ‘Aloha’ and wanted to bury it before it even started shooting.” Crowe has never come out and said how much control Sony took with the final cut, but as a student of his films, it’s pretty obvious that the cut we have most definitely isn’t his.

2. A whole lot of content actually works extremely well in ‘Aloha’ if you can manage to look past its flaws. Crowe is known for creating wonderful characters, the most charming, smart and witty dialogue that you’ve ever heard, and using music in the most perfect ways. ‘Aloha’ is loaded with all of that. In case you ever happen to give it a second chance (or see it for the first time), I recommend paying attention to the aesthetics of the following scenes: the time that Bradley Cooper and Emma Stone spend in the Hawaiian village; the awkward dinner scene at the home that belongs to Rachel McAdams and John Krasinski’s characters; and the scene with Bradley Cooper watching Rachel McAdams’ daughter at the dance studio. While the movie itself is a complete mess, those three scenes are beautiful.

I’m tempted to go with recent sci-fi bombs like ‘Chappie’ or ‘Passengers,’ but I may guiltily enjoy something more basic. I’ve previously mentioned some of my favorite Jean-Claude Van Dame movies, but I have to say that I’m really missing the Jet Li vehicles. One that pops to mind here is ‘The One‘, which has multiple Jet Lis traveling across the multiverse in order to kill each other and, not unlike the Highlander, become more powerful. Fortunately, there aren’t very many different parallel universes to visit, so becoming “The One” is pretty feasible. In addition to Li, the extended cast for the movie is tops, with Delroy Lindo and Jason Statham almost wasted in secondary roles.

‘Tis the season and all that, so my Facebook feed is hopelessly cluttered with posts ranking the all-time greatest Christmas movies. Meanwhile, I’m still hung up on Thanksgiving. When conversation turns towards Turkey Day, people typically think of poultry, mashed potatoes, and stuffing. My mind, on the other hand, veers towards ‘Blood Rage‘. That’s the title of a movie, by the way, not red-eyed fury at the prospect of sitting down with my extended family for a meal. (OK, maybe that too.)

Just about every conceivable holiday was strip-mined for slasher fodder in the early 1980s. It was only a matter of time until some visionary combined stalk-and-slash with Thanksgiving, and, oh, what a bountiful feast it is. Thrill to longstanding confusion about which twin is the evil one. The cigarette-ravaged star of ‘Mary Hartman, Mary Hartman’, when she’s not busting out of her top, is spread-eagle on the kitchen floor stuffing her face full of leftovers and misdialing frantic calls for help for half the movie. Never before have you seen a slice of pumpkin pie mushed into a ball and thrown at a nuthouse wall this dramatically. Ted Raimi has a bit part selling condoms at the drive-in where the obligatory, grisly childhood prologue takes place.

I could keep droning on and on about how bonkers ‘Blood Rage’ is and why it’s perched near the top spot of my favorite guilty pleasures, but I think I’d rather show you instead. 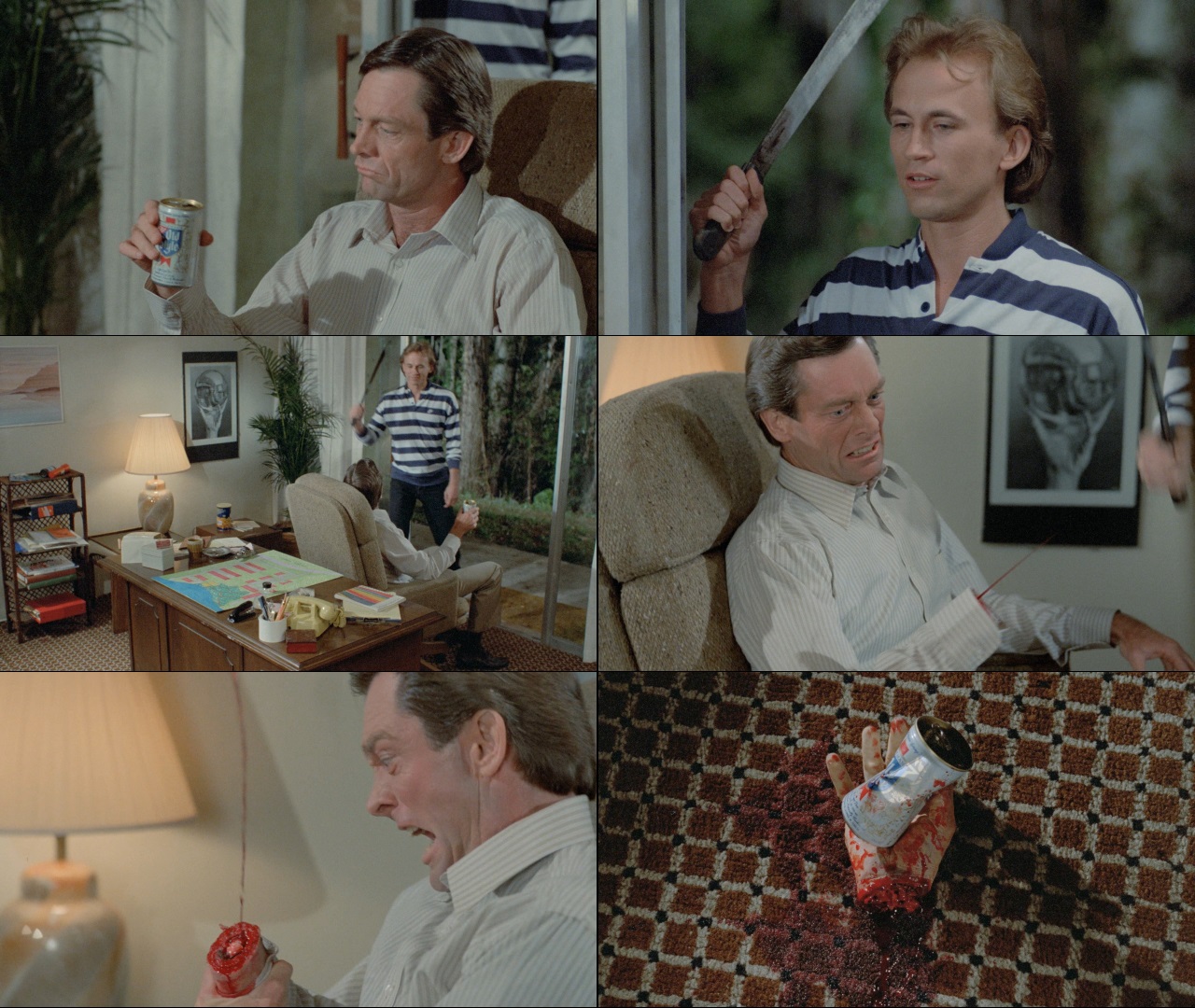 The fingers are still twitching too! Ridiculous from its first frame to the last, howlingly funny (sometimes intentionally!), drenched in imaginative splatter, and fat-packed with all the gratuitous sex and nudity you’d expect from the Golden Age of Slashers, ‘Blood Rage’ is what I’m thankful for this and every year. If you’re a cineschlock enthusiast who hasn’t gotten around to witnessing the awe and glory of ‘Blood Rage’ (under that or its seemingly dozens of alternate titles), you owe it to yourself to pick up Arrow Video’s outstanding Blu-ray release.

With so many possibilities to choose from, I hardly know where to begin. ‘Showgirls‘ is my usual go-to answer for this question, but I think I’ll take a different tack this time.

I was 16-years-old when ‘Predator 2‘ was originally released. As a big fan of the first film from innumerable viewings on VHS and HBO, I was very excited for the sequel. For some reason, I got to the theater a few minutes late and missed the entire opening action sequence which set up the new movie’s premise and storyline. Instead, I stepped into the screening room exactly as a gratuitous bit of nudity filled the screen. That left quite an impression on my adolescent mind.

It’s more than fair to admit that ‘Predator 2’ is nowhere near as good as the original. The movie is very corny and dumb, and Danny Glover isn’t a particularly convincing action hero. However, it’s plenty entertaining as sci-fi horror schlock, serving up lots of bloody gore and another memorable creature from the Stan Winston Studio. The sequel holds no pretensions of being anything more than it is. I enjoy the hell out of it every time I watch.

Tell us all about your favorite guilty pleasure flicks in the Comments.