Clowns seem to be having a bit of a moment this year. A few weeks after Pennywise terrorized audiences, the Clown Prince of Crime gets an origin story in theaters this weekend. Our latest Roundtable topic looks at some of our other favorite fictional clowns.

It feels like I’ve been talking about clowns for months now. From Gags to Pennywise to Joker to the clown roaming the streets of Chicago a few blocks north of me, there’s something in the air, and that air is filling balloon animals. For this, I want to celebrate a great clown who has gotten lost in the shuffle: Krusty the Clown. Yes, that’s Herschel Shmoikel Pinchas Yerucham Krustofsky to loved ones. Krusty is a staple in The Simpsons and it seems like there isn’t an aspect of the characters’ lives he hasn’t touched. He’s Bart’s on screen idol. He’s an occasional pet project for personal development. He also serves as a strong dosage of religious diversity to Springfield. He’s gruff but vulnerable, egotistical but insecure. Krusty has a big personality and an impossibly tiny bicycle, and is a clown palate cleanser. Just when it feels like everywhere we turn are clowns, good ol’ Krusty will still bring a smile to my face, without face paint.

First off, you won’t find my favorite clown scene (or favorite anything else) in the movie Octopussy, in which Roger Moore as James Bond has never looked worse in my eyes. Acouple of favorite clown scenes do come to mind, however, and yes, they stick pretty close to the great big bat. I’ll never forget the first time I saw the cold open of The Dark Knight. I was with a group of people with various interest levels in Batman, but I don’t think anyone was expecting anything like that mob bank robbery sequence. It remains a potent scene to this day, and even stands up well on its own despite being much imitated. Introducing a series of anonymous characters who then exit quickly while being secure in a false confidence plays nicely on the idea of clowns that are tragically humorous. These players meet a demise fit for the clown masks they wear.

Another humorous clown I like is from The Opera episode of Seinfeld. The scene in Crazy Joe Davola’s stalker apartment wherein he relates the plot of Pagliacci to Elaine while calling her Nedda is funny, but it becomes funnier when Davola later dons the clown outfit.

Finally, a scene that makes everyone in my family crack up is from the direct-to-video movie Lego DC Super Heroes: The Flash. After Flash and the Justice League foil the Joker’s Metropolis corruption scheme (in the first of a series of Groundhog Day time loops), the Flash is confronted with the results of the damage that the Joker inflicted, including turning Batman (visually) into the Bat Clown. It makes my kiddo laugh, and in turn that me me laugh. 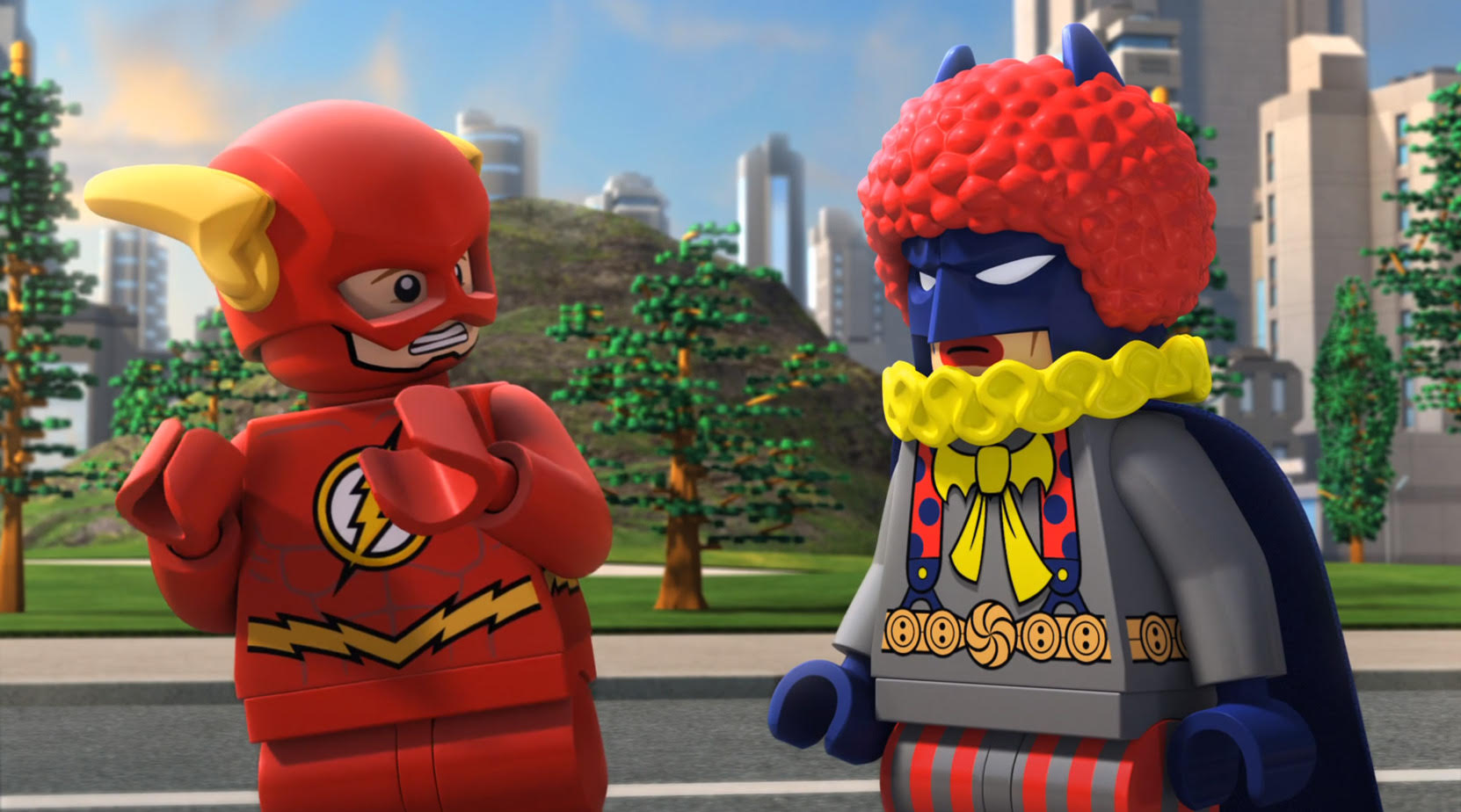 With so many evil clowns populating movies these days and scaring the baggy pants off of audiences, it’s easy to forget that clowns, much like court jesters, once personified joy and silliness. That’s the type of clown I prefer, thank you very much. Two of the most buoyant buffoons ever to put on the makeup and garish, ill-fitting outfits are Gene Kelly and Judy Garland in the 1948 Vincente Minnelli musical The Pirate. Though the movie was a flop when first released, it’s now a cult classic, and the broad, slapstick humor sprinkled throughout culminates in a fitting finale that defines the film.

“Be a Clown” remains the single standout song in a subpar score by legendary tunesmith Cole Porter, and his clever lyrics coupled with the stellar vocals, bouncy dance moves, and delightful… well… clowning of Kelly and Garland make the number both the highlight of the picture and an iconic MGM musical moment. (A snippet of the sequence is featured in That’s Entertainment, Part 2.) If the melody sounds a bit familiar, it might be because the songwriters Arthur Freed and Nacio Herb Brown shamelessly ripped it off when the duo needed a new comic number for Donald O’Connor to complement their slew of old standards in Singin’ in the Rain. “Make ‘Em Laugh” was the copycat result, and though that uproarious tour de force has long eclipsed “Be a Clown” in popularity, it can’t tarnish the reputation of its inspiration. Porter’s song extols the many virtues of the clown profession: “Why be a great composer with your rent in arrears. Why be a major poet and you’ll owe it for years. When crowds’ll pay to giggle if you wiggle your ears, be a clown, be a clown, be a clown!” Gene and Judy, with their delightful, fun-loving performance, make us all want to be one, at least for a little while.

When I think of prime clown scenes, Anne Archer’s tragicomic character in Robert Altman’s Short Cuts is first to mind. The film itself is a minor miracle, and the way this character is tied to so much of the intertwined narrative is indicative of Altman’s gift to make the entire world feel connected, spanning everything from laughter to sadness, loneliness to love, and the kindness of strangers versus the frustration of families. It’s all there in this wonderful film.

When I was but a wee little thing, my parents rented Poltergeist on VHS. It was storming that night, appropriately enough. At the precise moment when the possessed tree burst into the kids’ bedroom onscreen, an all-too-real limb fell off a tree outside and banged up my mom’s car.

For my folks, that’s far and away the most memorable moment in the film. If you ask me, it’s always been that creepy toy clown: from that first viewing when I was around six all the way to the present day. Beyond preying on the fears so many of us had as children, this is just a masterfully executed sequence.

So many other filmmakers wouldn’t have been able to resist the urge of having blurry flashes of the clown as he skitters around in the background or toss in some kind of clanging sound effects to suggest movement. Instead, Tobe Hooper (and/or Steven Spielberg, depending on whom you ask) embraces its silent disappearance. We look on with breathless anticipation as Robbie slowly peeks under his bed, only to be caught off-guard as we learn this monstrosity is truly lurking. The swift attack that follows is easily the film’s most impactful scare, from the doll’s tendril-like limbs to its nightmarish face. Hmmm, what would you call a clown doll possessed by a poltergeist? A Clowntergeist, perhaps?

Predictably, the remake from a few years back tried to up the ante. If one clown doll gets that kind of reaction, try to fathom how terrifying a closetful of ’em would be! The answer is, of course, not the least bit.

Quick Change is one of Bill Murray’s most underrated movies. Despite being hilarious, it flew under the radar in 1990 and still isn’t even available on Blu-ray. Murray, who co-directed the film (his only directing credit), plays a small-time criminal who comes up with the ingenious idea of robbing a bank wearing a head-to-toe, outlandish clown costume, using the logic that nobody’ll recognize him once he changes out of it. The plan works beautifully, and he and his co-conspirators (Randy Quaid and Geena Davis) slip away unnoticed. What they didn’t foresee, unfortunately, is what a pain in the ass the seemingly simple act of getting out of New York City would prove to be, especially with a determined cop (Jason Robards) on their tails. The movie is great fun and deserves more recognition as a minor classic.

Some honorable mentions go to Bobcat Goldthwait’s delirious dark comedy Shakes the Clown and the many clowns celebrated throughout the films of Federico Fellini – in particular Guilietta Masina in La strada.

Which clowns from movies, TV, or other media get your vote?