The award-winning 2011 Korean epic ‘The War of the Arrows’ is on target for a limited edition Blu-ray SteelBook in Asia.

The plot synopsis states: “Raised by his late father’s friend, Nam Yi (Park Hae Il) has no hope for a better station in life due to his family background, and spends most of his time in the mountains hunting and honing his archery skills. On the day of his younger sister Ja In’s (Moon Chae Won) wedding, a Manchurian legion raids the village and captures many of the villagers as slaves, including Ja In. With his bow in hand, Nam Yi sets out into no man’s land to take down the Manchurian archers and rescue his sister.”

The Korean SteelBook release will be available on March 14, while a standard American Blu-ray of the film from Well Go USA hits stores a few weeks earlier on February 21st. As for the SteelBook version, I personally think that it’s quite attractive and definitely worth both the wait and the heftier price tag. The artwork is simple yet elegant. Check it out: 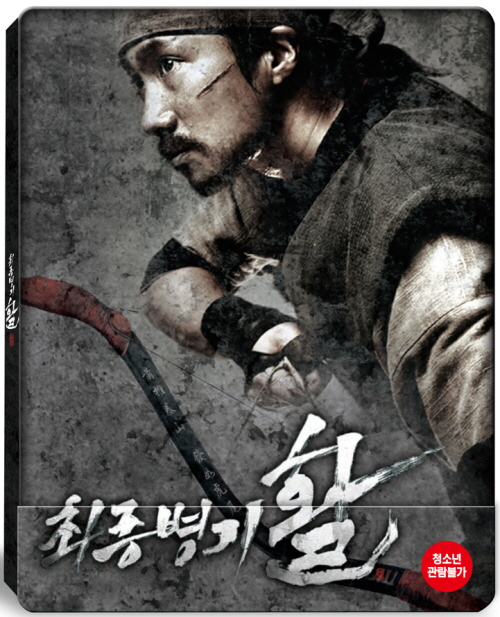 The release will include the theatrical cut of the film (122 minutes) on Blu-ray and the extended cut (128 minutes) on a bonus DVD. Note that while the Blu-ray is Region A (the same as North America), the DVD is Region 3 and will not be compatible here without a region-free player.

The Blu-ray will also feature 1080p video, a DTS-HD Master Audio soundtrack, and the following supplements:

The SteelBook for ‘The War of the Arrows’ is a First Press Limited Edition and can be pre-ordered at YesAsia for $37.99 in U.S. funds.