This week’s new videogame releases feature a sequel, a prequel and a reboot to longtime popular franchises. If those don’t break your budget, Disney has plans to drain the rest of the money from your wallet.

The year is 1962 and XCOM is being formed in response to an apparent alien menace. That means that it’s time to put on your hat and fight those aliens like they’re the Red Menace – or a bunch of hippies. In ‘The Bureau: XCOM Declassified‘, gone is the FPS view of early builds. The game’s combat occurs in real-time or slowed real-time (“Battle Focus”), unlike franchise brethren such as ‘XCOM: Enemy Unknown’. In the beginning, players have access to the basic weapons of the era, but can upgrade swiftly all the way to super badass energy weapons.

2K is really pushing the game’s fusion of 1962 era G-men and recent science fiction tropes like HUD overlays. The result is promising, and a far cry from when the project was originally billed as an ‘XCOM’ FPS.

From the ashes of THQ and the modest success of ‘Saints Row III’ comes ‘Saints Row IV‘. Originally intended as an expansion pack, the game is now a full-blown title of its own. In this one, the leader of the Saints ascends to Presidency of the United States, an office that gives him the power to dispatch pedestrians with the dubstep gun before getting actual superpowers.

This re-donk-ulous story easily amuses as frivolous entertainment. On the other hand, the series’ ongoing attempts to raise eyebrows with its shock value has been very divisive. Most hardcore ‘Saints Rows’ fans couldn’t give a damn that ‘Grand Theft Auto V’ is on the way. For myself, I’m happy that the game exists and will do well, especially after the THQ debacle. Otherwise, I can wait until it shows up in a Steam sale.

Hey ‘Splinter Cell’, time for a reboot! The reboot is likely to displease not only fans of the series, but also fans of Michael Ironside, the longtime former voice of Sam Fisher. In some ways, that’s OK. The fan base for ‘Splinter Cell’ has long not measured up to Ubisoft’s hopes for the series. And yet, ‘Tom Clancy’s Splinter Cell: Blacklist‘ still tries to keep stealth savvy players happy, while at the same time allowing for ‘Splinter Cell: Conviction’ levels of killing dudes. The story of the Blacklist can seem a little played out, but frankly, ‘Splinter Cell’ games usually feel that way. The franchise is unable to surprise like its ‘Metal Gear’ cousin.

It looks like the game’s extra development time has helped it to get a whole host of content usually unheard of in a quasi-stealth title with a single player campaign, multiple co-op sub campaigns and a horde of versus modes. No single element in the game rates as importantly as the return of “Spies vs. Mercs,” the truly inspired versus mode first seen in ‘Splinter Cell: Pandora Tomorrow’. The presence of both a classic 3v3 and new 4-on-4 versions of “Spies vs. Mercs” is nearly enough to get me to recommend trying the game, but my bias against recent ‘Splinter Cell’ titles keeps that recommendation in check.

Uh-oh, that giant sucking sound you hear is the vacuum coming for your wallet, purse or retirement fund, should you have children who are at all interested in collecting Disney character actions figures that unlock entire 3D worlds.

Where Activision has managed to take ‘Skylanders’ from an unknown license with questionable gameplay to the tune of generating $1.5 Billion in sales over the past two years, Disney plans to overtake and eliminate that competition with its bigger budget, sexier portal, and entire stable of characters ranging from ‘Pirates of the Caribbean’ to ‘Cars’ to Marvel, Star Wars, and – oh yeah, right – classic rodent-esque characters. Even marginal duds like ‘The Lone Ranger’ are set to catch-’em-all in ‘Disney Infinity‘.

Disney has long said that this is really the launching of a new platform, and has been quietly killing many other game projects (or just licensing them out). Be forewarned, the $75 starter pack will not allow children to tackle one of the game’s themed worlds, because players need to be separate in-theme characters, no set of which comes in that box. Nope, nothing short of $300 worth of currently available figures, playset pieces and power discs will prevent kids from feeling like there’s more content that they just can’t get.

Such an obviously imitative product that exploits children’s need to collect is bound to rub many people the wrong way, even while others may be pleased with the opportunity to collect and play. The $100 million in development costs suggests that Disney expects huge sales successes, but unless a given family is ready to commit some big bucks over the next year at least, I’d stay away.

And here’s ‘Disney Infinity’ out in the wild world… hide your wallet. 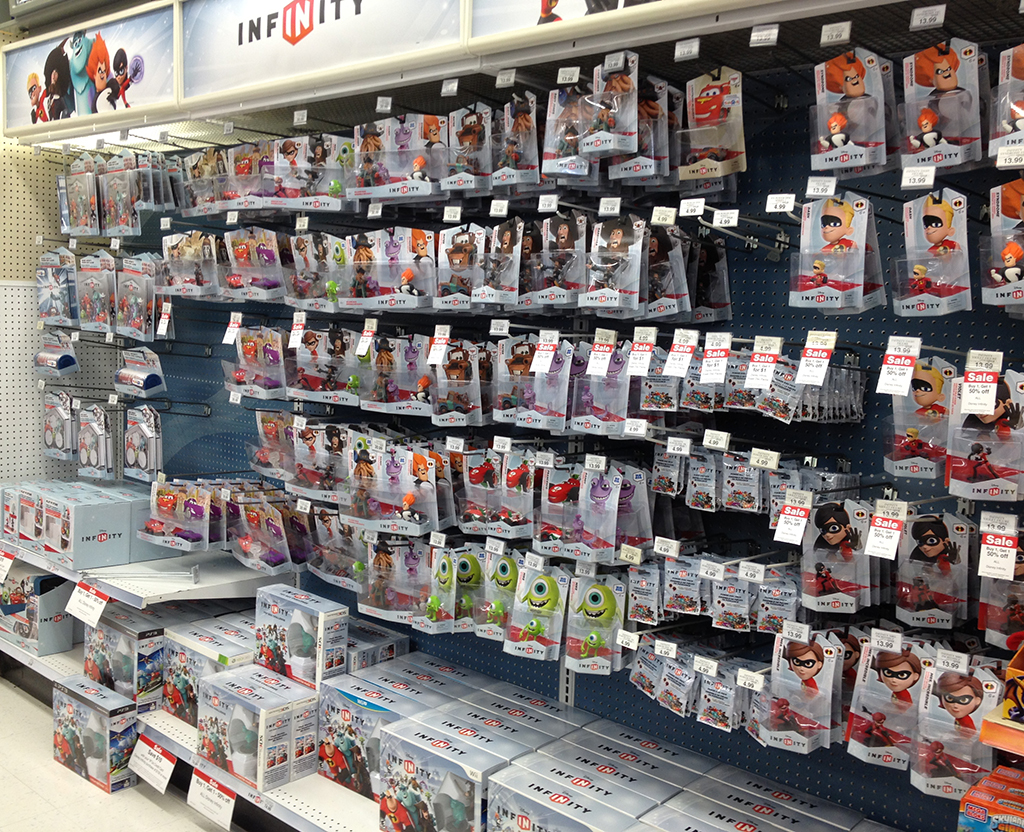