It seems that the summer lull that yearly affects the videogame industry is upon us already.  Only lackluster titles await this week, and things don’t seem like they’ll be improving any time soon.  It’s time to catch up on some of those games you’ve been neglecting.  Or go outside, if you’re into that sort of thing.

When I first saw ‘Alpha Protocol’ at E3 back in 2008, I was excited.  Sure it’s a little stealthy for my tastes, but the designers kept name-dropping ‘Deus Ex’ in a very promising way.  And 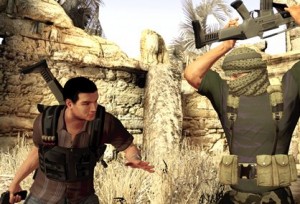 ‘Alpha Protocol’ does pull from ‘Deus Ex’ quite a bit.  Though it’s commonplace now, RPG elements in a shooter were once a novelty, and ‘Alpha Protocol’ uses them nicely.  You’ve even got the ability to approach the game however you like.  Sure, you can sneak around, but if you prefer to go in guns a-blazin’, then you’re welcome to.

‘Alpha Protocol’ has also mixed in plenty of ‘Mass Effect’ for good measure, and you’ll have plenty of dialog tree options that affect the story.  But dialog and character customization only count if the gameplay works, and that’s one part you’ll have to judge for yourself.  It’s glitchy and it’s a bit clumsy at times. If you’re willing to deal with that, there’s some pretty interesting stuff buried underneath it all.

Well, the jury’s still out on this one as far as reviews go, but ‘Backbreaker’ is definitely an interesting case.  It was developed by NaturalMotion, a company known for animation technologies like the ones used in ‘Force Unleashed.’  As you might expect, ‘Backbreaker’ uses that technology to create more realistic looking motion, including the much tauted tackle system.

There doesn’t seem to be a lot more than that, though.  Nothing that you wouldn’t find in ‘Madden,’ anyway. Unlike the ‘Madden’ franchise, you’re without an NFL roster.  It looks like plenty of fun, but if you’re a rabid football fan, this might not satisfy you.  Either way, grab the demo before shelling out the cash for this one.

Also coming out this week