As I found myself digging through my collection of old ‘Twin Peaks’ merchandise for my ongoing David Lynch marathon, I stumbled upon an interesting piece of memorabilia that I’d forgotten that I had – an audio cassette recording known as ‘Diane… The Twin Peaks Tapes of Agent Cooper’. The fact that I no longer own a tape player that I might use to listen to the cassette presented a small but fortunately not insurmountable obstacle to my nostalgic enjoyment.

As mentioned in another recent article, the Cooper character in ‘Twin Peaks’ often dictated his thoughts into a tape recorder. Most of these recordings were addressed to “Diane,” his presumed (but never seen) secretary at the Bureau. Much as the ‘Autobiography of F.B.I. Special Agent Dale Cooper’ book made use of this trait as a storytelling conceit, so too does this audio recording, narrated by Kyle MacLachlan in character. 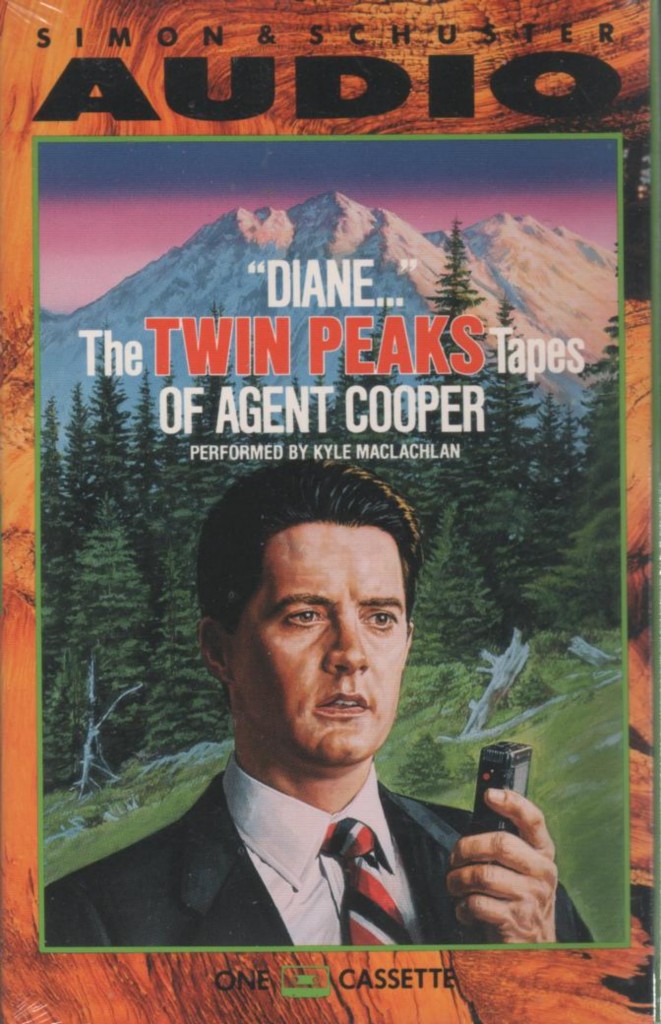 ‘The Twin Peaks Tapes’ consist of 42 tracks, most much less than a minute in length. (Some are only a few seconds.) The first and last are songs from Angelo Badalamenti’s soundtrack album. The rest are a mixture of actual audio clips from the TV show (“Diane, I’m holding in my hand a small box of chocolate bunnies”) and original material in the same vein. The difference between the two is quite obvious, both in recording quality and performance. The new content all blatantly sounds like it was recorded in a studio, complete with some cheesy stock sound effects. Worse, MacLachlan sounds bored, like he phoned this one in. He very likely read the script for the first time as he recorded it in one take.

Released by Simon & Schuster in the fall of 1990, the tape’s entries start with Cooper en route to Twin Peaks just before the show’s pilot episode, and span to the early part of the second season, after Cooper recovered from his gunshot injury but before Laura’s killer was identified. Assuming that you’ve watched the TV show, the tape doesn’t contain any new or particularly interesting information. Many of the entries are jokey in tone, and most simply reiterate things we saw in the series. (“Diane, never drink coffee that has been anywhere near a fish.”) Further, as a narrative unto its own self, the ‘Twin Peaks Tapes’ are too fragmented to tell a consistent or compelling story. You need to have seen the show to understand most of what Cooper talks about, and the entries end without resolution to the mystery.

Mostly, the tape is just a silly gimmick. With that said, if (like me) you haven’t watched the series in full in a while, the ‘Diane…’ recordings offer a reasonably fun (and quick) refresher of the plot points in the first and early second seasons. I enjoyed listening to them again.

As far as I’m aware, this content was only ever officially released in audio cassette form, and is obviously long out of print. The internet being a wonderful thing, I found the recordings converted to m4a files on this blog. The experience of listening to Cooper’s analog cassette recordings in digital form strikes me as wrong on several levels. On the other hand, once I loaded them onto my phone and played them back while holding the phone up like Cooper’s tape recorder, I felt a lot better about it.

Of course, I also advocate owning the original cassette, as a collectible if nothing else. While out of print, it can still be easily found on the secondary market.