Maybe the timing was right. Maybe we did a really good job promoting this one. Maybe this was a great prize that a lot of people wanted. Maybe the photo I chose for our caption contest simply inspired your creativity. Or perhaps all of the above. Whatever the case, we had a big turnout for our ‘Tucker and Dale vs. Evil’ Blu-ray giveaway last week, and received a ton of hilarious entries. It’s taken me a few days to sort through all of them, but the time has finally come to announce the results.

As explained in the original contest post, we challenged you to come up with a funny or clever caption for the following photo: 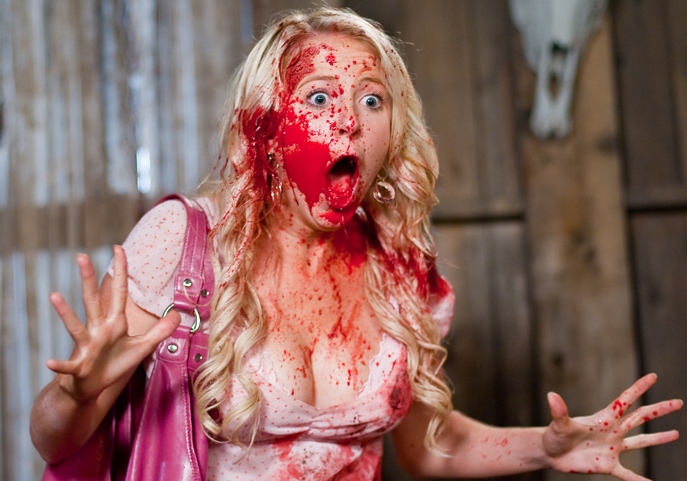 You guys really rose to this challenge. I feel like everyone who entered deserves an honorable mention, but that might be counter-productive. So, I had to work really hard to whittle the results down to a manageable number. I encourage everyone to read through the rest of the comments on the original post for a lot of hilarity that I just don’t have space to highlight here.

“Aww man I just shot Marvin in the face!”

Just out of frame Shayne receives an Honorable Mention.

C’mon, Shayne. You had to see this one coming.

Becky had a terrible first day at the Crayola Factory.

Somehow, Kool-Aid Man dirty sex jokes became a running meme in the contest. This one from jftx was my favorite of those:

besch64 gave us these:

Jennifer was shocked and aroused by her trip to the McRib production line.

When asked to note what stands out most about this picture, nine in ten straight males will list “blood spatter” at #3.

Boobs and blood? This movie is awesome already.

This is nothing like those commercials with the blue liquid and the girls smiling and playing tennis!

Soda and Pop Rocks is just an urban legend, honey, I’ll prove it to you.

(It is the rabbit)

“How many times have I told you? BOTH hands carrying grandma’s tea set, Steve — BOTH HANDS!!”

That’s right, I said “winners,” plural. When I posted the contest, I may have said that we only had one copy of the Blu-ray to give away. Well, it turns out that we have three. I’m pleased to announce that all three of the following entries have won:

The “Free Puppy” giveaway at Wal-Mart on Black Friday was a terrible idea.

Dominique M. gave us a bunch of good ones:

That’s what you get for being in Good Luck Chuck!

Don’t worry, your face wasn’t what the boys were looking at anyway.

If you experience an erection lasting longer than 4 hours, see medical help immediately.

I don’t know; they just made me laugh.

Oh, we’re not done yet. Remember our ‘Super 8’ contest from the previous week? I gave away one copy of that disc at the time. It turns out that our friends at Dolby Labs sent me an extra copy, so I’m giving that one away to Joe C., who scored an honorable mention the first time around, and also gave us a great entry in this contest too:

Goldilocks learns that you don’t f**k with the three bears.

This was a blast. Thanks to everyone who participated. We hope to do this again soon.