Today, I’d like to shine a spotlight onto one of the many independent PC games that are currently classing up the videogame world – and doing so pretty inexpensively, at that.

‘To the Moon’ tells the story of two technicians who, in their latest assignment, seek to fulfill the last wish of an old man just before he shuffles off this mortal coil. I was given this game as a gift, along with a challenge: Could I play through its four-hour length and not be moved by the story?

To be clear, ‘To the Moon’ is ostensibly an adventure game. Its gameplay consists mainly of clicking to move the character around and to locate interactive objects in the environment. All of this is done from a bird’s eye view, which when combined with the game’s pixel art, is visually reminiscent of a Super Nintendo-era RPG. The presentation of the game’s story is paramount, followed by the charming visuals, and that leaves gameplay a distant third. The de-emphasis on gameplay (even for an adventure game) invites the question: Why even bother making ‘To the Moon’ a game at all? Why not pick another medium such as video to tell the story?

As the game begins, the two player characters (and de facto protagonists) arrive at the estate of one deathbed-bound Johnny Wiles. The characters, Dr. Eva Rosalene and Dr. Neil Watts, are in the employ of Sigmund Corp, a company that specializes in granting those near death with new memories that are tailored to the customer’s greatest unfulfilled ambition. Quickly, the game introduces one of its go-to themes: extreme sentimentality.

The player is given enough freedom to traipse through the terminally ill gentleman’s estate, poke around his mementos and curiosities, and see the gravesite of his late wife, just adjacent to a derelict lighthouse. Fortunately, the game is also quick to introduce another one of its themes, an ever-present and often juvenile humor that’s used as a coping mechanism for the aforementioned sentimentality. To this point, the game has been mostly a tutorial and an introduction to the characters. Once it’s revealed that in order to manufacture and gift their customer a new set of memories, Dr. Rosalene and Dr. Watts must enter the dying man’s memories, the game’s hook has been clearly baited. 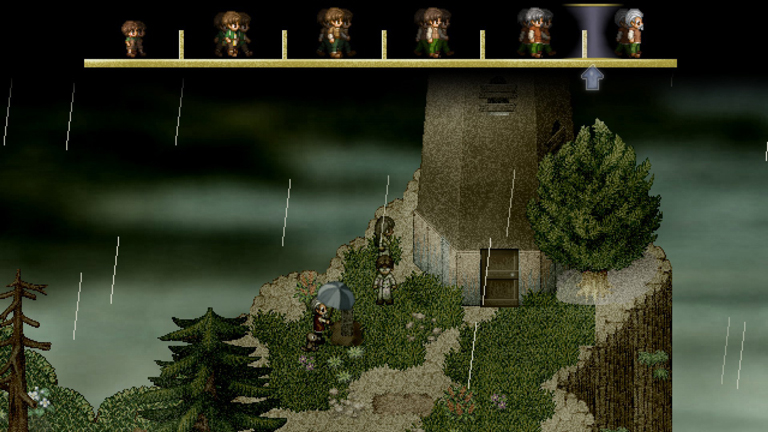 The client, who is alive but not lucid, states that his wish is to, “Go to the Moon.” As the doctor’s try to ascertain the best way to navigate his memories, they also begin to take more pointed note of his strange estate. Specifically disturbing are the mysterious rooms full of paper rabbits, which are clearly meant to be kept secret. Facing the mystery, the two doctors decide to visit the client’s most recent memory. Their plan is to use the memories fed from the client into their computer to create virtual worlds they can explore. In his most recent accessible memory, they question the computer’s recreation of their client, wanting to understand how best to reconcile the devoted husband and lighthouse owner with would-be astronaut and lunatic. 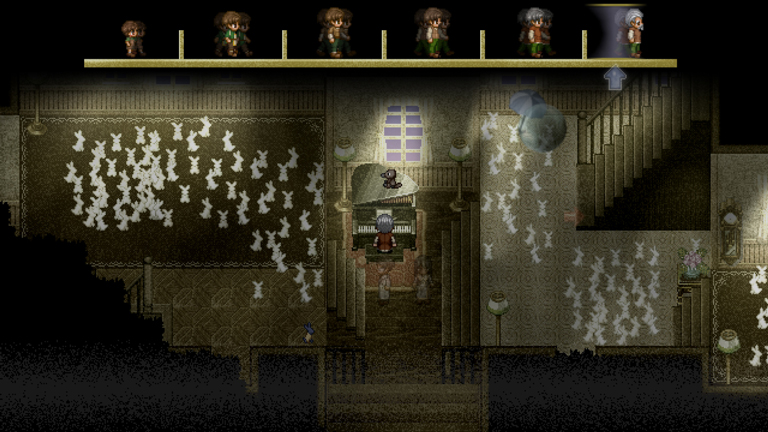 Quickly, a gameplay trend forms. The player enters a memory and witnesses key scenes from the client’s life in order to understand how relatively mundane objects, such as a favorite backpack, can be the link to another older memory or could link to the new false memories. While several complications arise as various characters demonstrate their motivations through the course of years between memory jumps, navigating the game is different from, say, reading a thriller. The player is responsible for moving the story along. That is, if the story stops, or the two doctors’ mission is thwarted, the client dies, or the secrets are not brought to light, that’s the player’s fault.

I have some quibbles with the game. The tempo is uneven, the dialogue is awkward in places, collision detection is less than perfect, etc. Yet the game achieves much that’s worthy of discussion. ‘To the Moon’ is so difficult to explain, because trying to express where the story takes you is a poor substitute for going there. While the content might be more expected and thereby less significant in a novel or film, the level of interaction that the game gives you whenever the plot twists or thickens is something those other mediums couldn’t achieve.

By railing against the commercial confines that shackle games with multi-million dollar budgets, indie PC titles like ‘To the Moon’ buoy the horizon of game expectations. Now, if only a sequel were in the works…

TagsPC To the Moon Video Games