I love movies. I love videogames. But some things just shouldn’t be combined.

Before I even begin to make the argument that videogame movies just shouldn’t be made, let’s take a stroll on over to Rotten Tomatoes, the movie review aggregator. They’ve done most of the heavy lifting already.

Check out the coundown they’ve got for the best videogame adaptations. It’s not their opinion, but the general consensus of the critics on the site, based on the score of the movie. It’s a pretty funny list at first, but it starts to get depressing as you go higher up. At number three, we’ve got Paul Anderson’s (not Paul Thomas Anderson, mind you) ‘Resident Evil,’ which was a bad movie by all accounts, even though it got away without too much internet abuse. I’m willing to venture that putting Leeloo Dallas Multipass (aka Milla Jovovich) in there made a lot of people – who would otherwise be damning the film – really happy.

Number two on the list, ‘Final Fantasy: The Spirits Within,’ is a surprise, and you can bet it’s only on there for the technical achievements. It’s sure not for the unclear story, lack of a real enemy, or the awful script.

Number one on the list and the best reviewed videogame movie of all time is ‘Prince of Persia: The Sands of Time.’ It makes new ground for videogame movies by being the first with a score of over 51 percent. Yikes.

Now, I haven’t seen ‘Prince of Persia’ yet, so I can’t really comment on the film. The previews made it look like ‘Pirates of the Caribbean’ in the desert and without all the charm. And that’s the absolute best movie we’ve got.

I don’t know exactly why game movies don’t work. It could be because games don’t rely on story for entertainment. I’m not saying they don’t have stories, and sometimes even good ones, but the most exciting narrative is the one you create yourself. It’s not what the boss says before the fight that’s exciting; it’s how you go about beating him, and the thrill of conquest.

Multiplayer games like ‘Modern Warfare’ are perfect examples of this. There’s no story at all. Players spend far more time playing competitively than they do in the single player campaign. You can’t make that experience into a movie. It’s an interactive experience, not a passive one.

Sure, there will be exceptions. I’m generally not a fan of coconut. I can’t stand it in candy, a 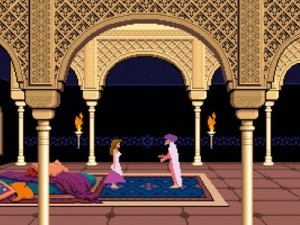 nd it’s unacceptable in drinks. It overrides every other flavor, and when I should be eating a chocolate bar with some coconut in it, I feel like I’m eating a coconut bar with shredded coconut surrounded by coconut nougat. When it’s freshly shredded on my chicken though, I love it.

When the ‘World of Warcraft’ movie comes out, I have no doubts that it’ll be coconut chicken. That’s because Blizzard is intense about its properties, and knows what could happen if the ‘WoW’ movie ends up being as bad as the ‘Dungeons & Dragons’ movie.

Unless other companies are willing to step up their game and actually work with the movie studios to produce a worthwhile experience for their fans, we’re going to get more flicks like ‘Wing Commander,’ ‘Double Dragon,’ and the Uwe Boll catalog. If that’s the case, which it likely is, then let’s just stop altogether.