Just in time for the 2012 remake with Colin Farrell, Paul Verhoeven’s 1990 sci-fi thriller ‘Total Recall‘ starring Arnold Schwarzenegger will get a Blu-ray SteelBook in the UK next month. Both films are adapted from Philip K. Dick’s short story ‘We Can Remember It for You Wholesale’, but will they both feature three-breasted hookers?

The year is 2084. Douglas Quaid, a construction worker on Earth, is haunted by a recurring dream. He buys an implanted memory from Rekall Inc. to try and make sense of it, but something goes wrong. He finds himself as a secret agent fighting against the evil Mars administrator Cohaagen.

The SteelBook design is decent, but I personally would have preferred some artwork a little more eye-catching that we haven’t already seen before. Click the image below to enlarge: 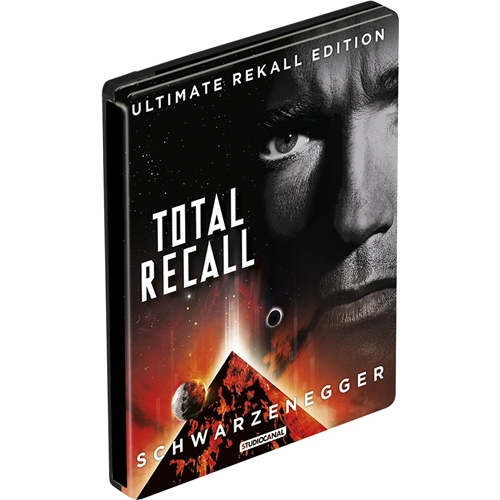 Special features for this release will include:

While we’re on the topic of ‘Total Recall’, I found this “Total Ripoff” comparison of scenes from the 1990 movie and the new 2012 remake to be pretty amusing:

After watching the video, it really makes me wonder why the remake was necessary at all. Judge for yourself.

The SteelBook for ‘Total Recall – Ultimate Rekall Edition’ will be available on July 16th. The title can be pre-ordered at Amazon UK, which will ship to North America. Unfortunately, there’s no confirmation about region coding status at this time.