The acclaimed non-stop action film ‘The Raid: Redemption‘ will get a shiny exclusive Blu-ray SteelBook in the UK.

Deep in the heart of one of Jakarta’s most deprived slums stands an impenetrable high-rise apartment block. To most, it is 30 floors of Hell to be avoided at all costs and is considered a no-go area by even the bravest and most experienced police officers.

In a desperate bid to flush these violent criminals and their leader from their haven once and for all, an elite SWAT team is tasked with infiltrating the building and raiding the apartments floor by floor, taking out anyone who stands in their way. Once inside, it soon becomes terrifyingly apparent that the real problem at hand is surviving long enough to be able to get out again.

The artwork for the limited edition SteelBook is based on designs by award-winning comic book artist Mark Simpson, a.k.a. Jock. The anime-style design is quite nice on this one. Click the image below to enlarge: 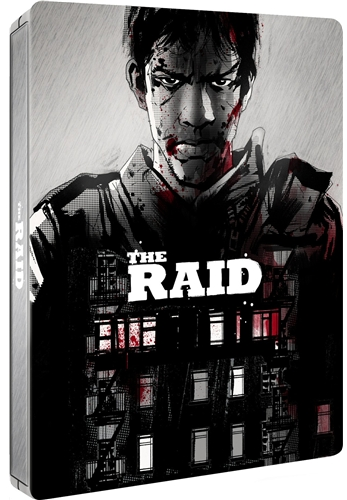 The release will feature the U.S. and the original UNCUT versions of the film. Special features for this release will include:

The SteelBook for ‘The Raid’ will be available on September 24th exclusively at Play.com for £14.99. Unfortunately, Play will not ship to North America and there’s no confirmation about region coding status at this time.