According to the plot synopsis: “Power-mad King Hyperion (Mickey Rourke) threatens to destroy all of humanity on his maniacal quest to obtain the ultimate weapon – the legendary Epirus Bow that gives the power to unleash war on both Heaven and Earth. But Theseus (Henry Cavill), a heroic young villager chosen by the gods, rises up to stop Hyperion’s brutal rampage. With supernatural help from the beautiful oracle Phaedra (Freida Pinto), Theseus embraces his destiny and leads a fierce band of warriors in a desperate fight for the future of mankind.”

The SteelBook release comes out swinging on March 3rd. Part of me really likes the design, but I must say that it’s very disappointing that a 3D option isn’t included. Plus, the French text on the spine really ruins it. Seriously, was that really necessary? 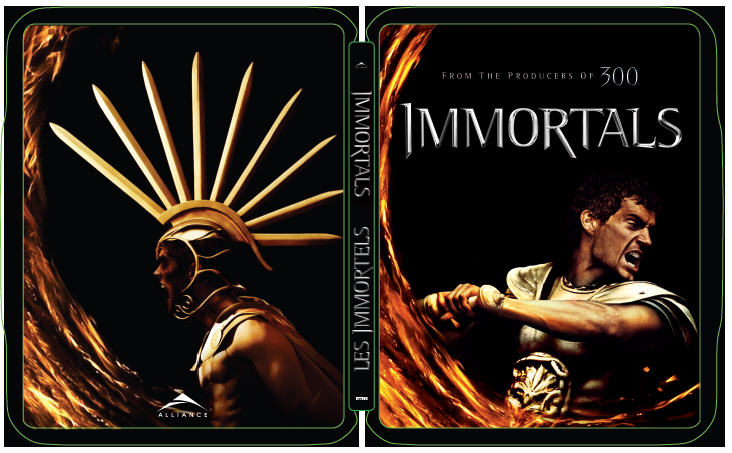 The Blu-ray/DVD combo pack will feature 1080p video and a DTS-HD Master Audio 5.1 soundtrack. Supplements will include:

Region coding is still undetermined. The SteelBook for ‘Immortals’ can be pre-ordered directly from Future Shop. It’s currently $32.99 in Canadian funds. Unfortunately, Future Shop does not ship outside of Canada.