Ridley Scott’s divisive ‘Alien’ prequel ‘Prometheus‘ will get an exclusive Blu-ray 3D SteelBook at Play this fall in the United Kingdom.

The ‘Prometheus’ Blu-ray SteelBook (both 3D and 2D included) will be exclusively available at Play in Europe on October 1st.

From the official synopsis:

Returning to the genre he helped define, Sir Ridley Scott has crafted the most unforgettable experience of 2012 in ‘Prometheus’. This gripping, thought-provoking and often terrifying masterpiece features a stellar ensemble cast including Charlize Theron, Michael Fassbender, Guy Pearce, Noomi Rapace, Logan Marshall-Green and Idris Elba and is a must-have for any self-respecting film fan.

After scientists Elizabeth Shaw (Rapace – ‘The Girl With The Dragon Tattoo’) and Charlie Holloway (Marshall-Green – ‘Devil’) discover mysterious cave drawings that point to the origins of mankind, they soon find themselves aboard the spaceship Prometheus, sponsored by Weyland Industries and on a journey to uncover the secrets of humanity. Overseen by the imperious Meredith Vickers (Theron – ‘Snow White & The Huntsman’), looked after by the android David (Fassbender – ‘X-Men: First Clas’s), and backed up by a team of scientists, Shaw and Holloway arrive on the isolated moon LV-223 to discover an abandoned alien spaceship and the truth… that not all is as it seems…

This is certainly a slick-looking case, but to be honest, I had mixed feelings about the movie and seeing it once was enough for me.

The front cover sports an image of the massive face carving that the research team comes across inside the cave in the movie. Here’s a closer look at the front. (Click the images below to enlarge.) 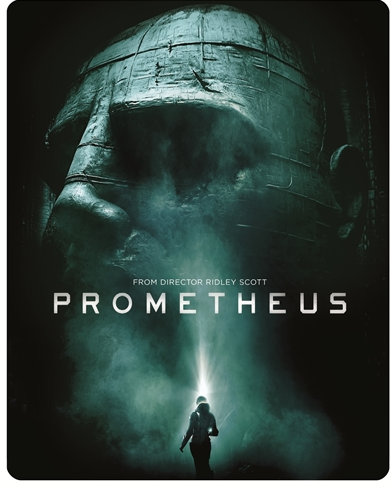 The back design features a picture of the alien ship: 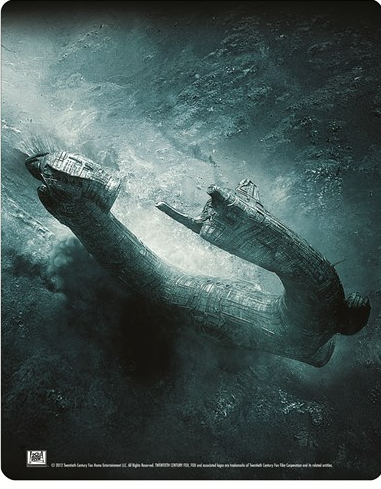 Not much else is currently known about this release, but the SteelBook for ‘Prometheus – 3D’ will cost £23.99 and can be pre-ordered from Play. Note that Play does not currently ship to the U.S. or Canada.