Listen up, grunts. New orders have just come down from the PITT. Our mission is to obtain a SteelBook collectible Blu-ray edition of our new movie, ‘G.I. Joe: Retaliation’, before Cobra forces scoop them all up and sell them on eBay for three times the price to fund their latest diabolical world domination scheme. There’s only one place to get it, so let’s gear up and move out on the double. Yo, Joe!!

As a movie, this year’s ‘G.I. Joe: Retaliation‘ benefited greatly from reduced expectations. Its predecessor, the execrable ‘The Rise of Cobra’, was an unwatchable disaster on every level. While it doesn’t officially reboot the franchise, the sequel wisely dumps almost the entirety of the original cast and crew to start over with a new batch of characters. Its director is also much less of a bumbling idiot, who had actually heard of G.I. Joe before being hired for the job and at least attempted to respect the material. All in all, ‘Retaliation’ is vastly better than the prior movie. Even so, unfortunately, it merely rises to the level of “Just OK.” Admittedly, that’s a big improvement from “Major Shitstorm of Incompetence.”

After a decently successful theatrical run, the film will come to Blu-ray on July 30th in both 2D and 3D editions. (The 3D is a post-conversion. I felt the results were mixed in the theater, but it might look better on disc.)

In addition to those, Walmart will offer an exclusive SteelBook version that contains 2D, 3D, DVD and Digital Copy all in one package. 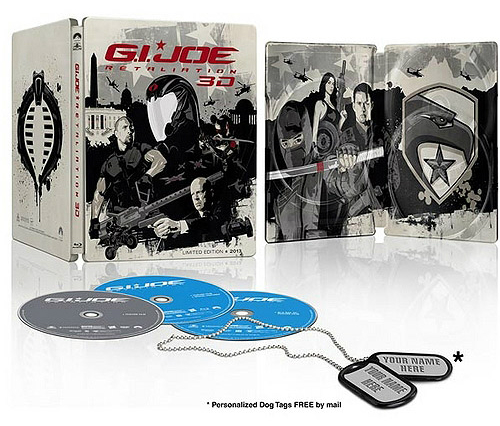 I kind of like the comic book style artwork, which is fitting for the content, though I don’t know why it’s in black & white. It would look better in color.

The SteelBook is priced at $29.96 and can be preordered from Walmart.

Now you know, and that’s totally half the battle right there.