Only a SteelBook is strong enough to contain all the muscle packed into ‘The Expendables 2‘. Future Shop in Canada is now taking pre-orders for the exclusive Alliance Blu-ray release.

The Expendables are back and this time it’s personal… Barney Ross, Lee Christmas, Yin Yang, Gunnar Jensen, Toll Road and Hale Caesar – with newest members Billy the Kid and Maggie aboard – are reunited when Mr. Church enlists the Expendables to take on a seemingly simple job.

The task looks like an easy paycheck for Barney and his band of old-school mercenaries. But when things go wrong and one of their own is viciously killed, the Expendables are compelled to seek revenge in hostile territory where the odds are stacked against them. Hell-bent on payback, the crew cuts a swath of destruction through opposing forces, wreaking havoc and shutting down an unexpected threat in the nick of time – six pounds of weapons-grade plutonium; enough to change the balance of power in the world. But that’s nothing compared to the justice they serve against the villainous adversary who savagely murdered their brother. That is done the Expendables way…

The SteelBook design features the slick ‘Expendables’ skull emblem with “Back for War” emblazoned at the bottom. I really like the design of this one, personally. Click the image below to enlarge: 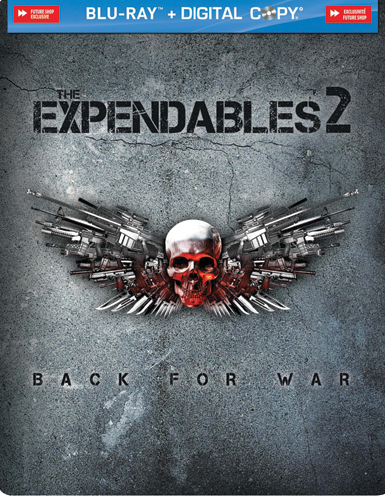 The Blu-ray/Digital Copy combo pack will feature 1080p video and a DTS-HD Master Audio 7.1 soundtrack. Supplements will include:

The exclusive packaging exclusive for ‘The Expendables 2’ will arrive in stores on November 20th. It can be pre-ordered at Future Shop, currently for $29.99 CAD. Unfortunately, Future Shop still doesn’t ship outside the country.