News has been awfully quiet on the SteelBook front lately. Collectors haven’t seen much of note to look forward to beyond that UK import of ‘Skyfall‘ that should be released in the near future. Fortunately, the Future Shop retail chain in Canada has come through with new metal case editions of a couple of this year’s Oscar nominees… if you can get them.

The more appealing of the two (from my perspective) is Ben Affleck’s based on a true story thriller ‘Argo’. I intended to see this in theaters, but never got around to it, so I’ve been looking forward to the Blu-ray.

(A college friend of Mrs. Z has a small role in the movie, but all of his dialogue was cut during post-production. I’m told that you can see him milling around the background of a few scenes with a big ’70s Jewfro wig.) 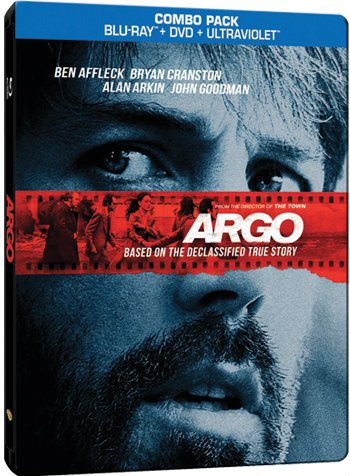 Future Shop also has a listing for the musical ‘Les Miserables’, scheduled for March 22nd and also priced at $26.99 CAD. However, no finalized artwork has been revealed for that one yet. I’d consider this one tentative until more details are officially unveiled.

As is sadly still the case, Future Shop will not ship outside of Canada. American collectors will need to arrange for someone in the country to purchase and mail the discs across the border. In some cases, Best Buy has been known to acquire American distribution rights to the same SteelBooks that Future Shop sells in Canada, but I haven’t heard anything about these two titles yet. Of course, Best Buy is so poorly managed that we probably won’t hear any announcements for something like that until the last minute. Keep your fingers crossed.