“There’s only one bullet wound!” screamed ‘Skyfall’ detractors. This alleged continuity mistake seemed to be the catalyst for countless criticisms thrown at the movie. So, how many times was James Bond really shot, once or twice? (Some plot spoilers to follow.)

‘Skyfall’ isn’t my favorite Bond movie, but it’s close. After the dismal display of shaky-cam in ‘Quantum of Solace’, which transformed the once-smooth espionage operator into a Jason Bourne lookalike, ‘Skyfall’ felt like a return to form, like we’d finally gotten back to who James Bond is.

After walking out of the theater, I remember being happy with what I’d seen. Fellow Bonus View writer Luke Hickman walked out right behind me. I was surprised that he didn’t like the movie at all.

“Then where was the other bullet hole?”

“Did the bullet from the rifle go through the same hole?”

Clearly, this gaffe was a big deal to Luke. It didn’t matter too much to me. I’ve seen so many action movies that I’ve learned not to question the finer points of reality. I mean, Bond fell hundreds of feet into what appeared to be a shallow rocky river and survived. That seemed more unbelievable to me, but I went with it.

The bullet controversy is all over the web. Explanations range from “He was faking so he could run away and retire” to “He was shot in the ribs, but he was wearing a bullet-proof vest.”

After Luke made mention of the wound, this issue did bug me a little, mainly because I’d have to wait for the Blu-ray to find out if he was right. With all the problems that people had with ‘Skyfall’, the bullet wound seemed to be the jumping-off point. How could we be expected to like a movie if the filmmakers can’t be bothered to get tiny details right?

When the Blu-ray was finally released, I promptly took it home and backed it up on my hard drive. Then I queued up my media player, hoping to get a perfect shot of Bond with two bullet holes. I skipped through the first part of the movie to get to the part where Bond digs the shrapnel from his shoulder with a knife.

The evidence is below. I’ve added arrows for emphasis. What do you think? Does Bond have one bullet wound or two? I clearly see two entry wounds. The one on the left is where he was shot in the excavator on the train (because that’s where he digs out the bullet shards), and the one on the right is from Eve’s rifle. 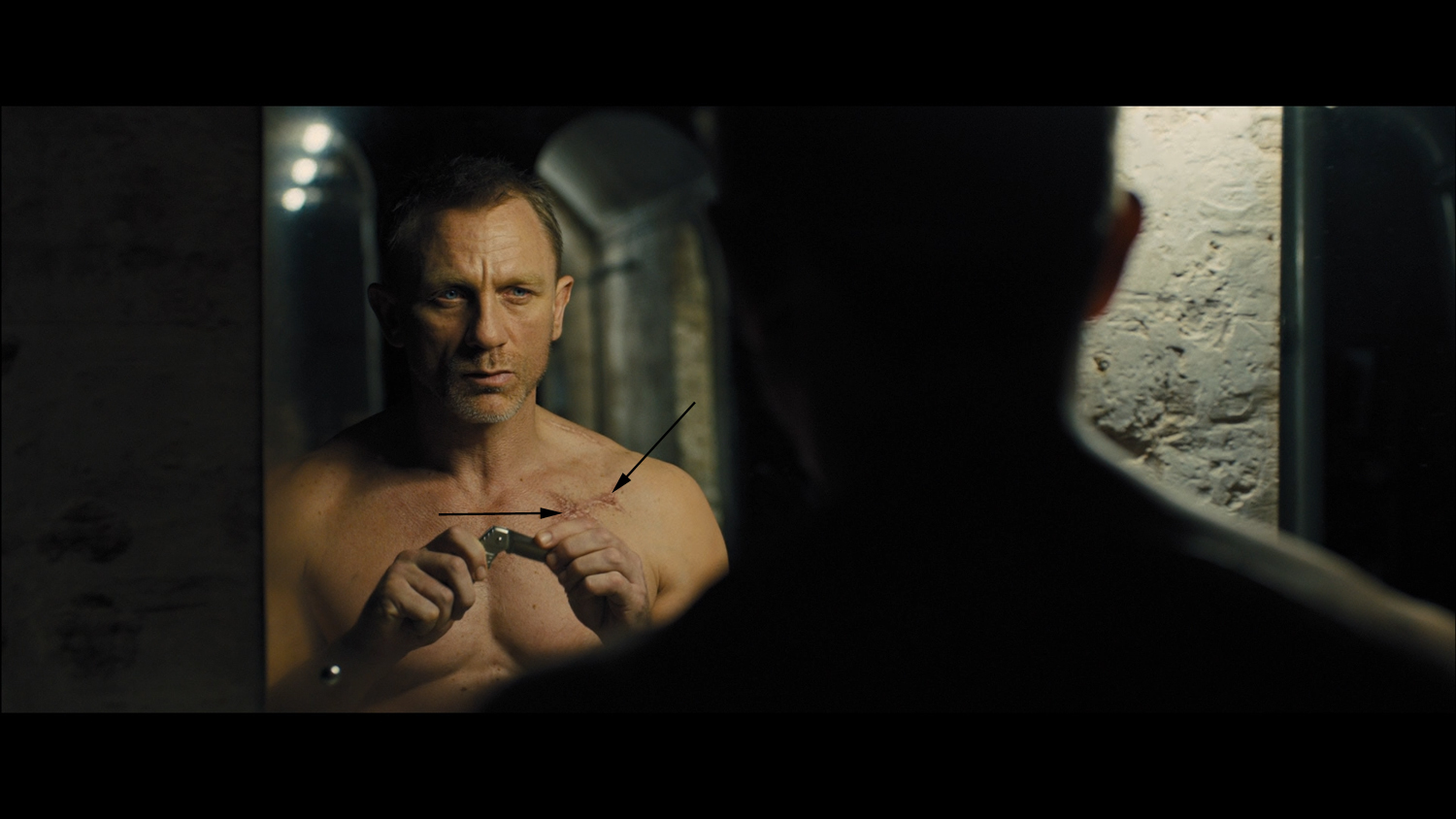