Laughs, thrills, drama, and a doppelgänger, too! The Whole Town’s Talking has got it all, and this early gem from director John Ford and actor Edward G. Robinson will surely have you crowing as well.

A few weeks ago, we did a Roundtable column focusing on memorable movie doppelgängers and evil twins. It was a fun topic, but it’s too bad I hadn’t yet seen The Whole Town’s Talking, because this rip-roaring comedy-drama from master director John Ford features one of the cleverest doppelgänger plots I’ve yet seen. In addition, the 1935 film boasts impressive special effects for its period and remains a terrific showcase for the esteemed talents of legendary screen tough guy Edward G. Robinson. With so much good stuff going for it, I’m surprised there hasn’t there been more talk about The Whole Town’s Talking over the years.

The enormous success of Little Caesar in 1931 proved to be a double-edged sword for Robinson. While it catapulted the 37-year-old actor to the top of Hollywood’s heap, it also instantly typecast him as a pugnacious gangster. The role may have suited the stocky, homely-looking star, but after a couple years he longed to bust out of the mold. It took some time, but after finagling a loan-out from Warner Bros., John Ford at last gave Robinson a chance – or at least half a chance – to expand his range. The Whole Town’s Talking would allow Robinson to play two plum parts: a mild-mannered, persnickety account clerk and his ruthless mobster doppelgänger, in a frenetic farce that morphs into a thriller in the last couple of reels.

Arthur Ferguson Jones (Robinson) is a fastidious, unassuming clerk at a New York corporation. He methodically plies his trade, keeping his mouth shut and head down while quietly pining for comely coworker Cymbaline Clark (Jean Arthur), a boisterous sparkplug who’s not afraid to stand up to the boss. Miss Clark barely notices Jones, but that all changes when a case of mistaken identity turns his meticulously ordered, by-the-book life upside down. Jones is a dead ringer for notorious heist-meister “Killer” Mannion (also Robinson), who’s just escaped from prison. When the overzealous NYPD arrest Jones for Mannion’s crimes, a front page furor ensues. Panic-stricken and frightened beyond belief, Jones vociferously proclaims his innocence, but it takes a while for him to prove that he’s not a violent crook.

Once he’s freed from custody, Jones receives an ID letter from the police to protect him if he’s ever mistaken for Mannion again. Yet when he returns home, who should be lying in wait but Mannion himself. It seems that Jones’ notoriety has given Mannion a diabolically good idea. The thug allows Jones to carry the ID letter by day, but at night, Mannion takes possession of it, so he can commit more crimes without any fear of getting caught. The plan works like a charm at first, but complications soon arise that raise the stakes of the charade and make it even tougher for everyone to figure out who’s who!

The inspired script by Jo Swerling and Robert Riskin (based on a story by W.R. Burnett, who wrote Little Caesar as well) zips along at a brisk pace, deftly mixing laughs with thrills and producing a perfectly pitched climax. The pointed comedy tickles the funny bone but never goes too far. When tension and drama creep into the tale during the last half hour, the shift in tone seems natural. The rapid-fire repartee also keeps us engaged, fueling a breathless narrative that doesn’t quit until the satisfying fade-out. Juggling moods while also weaving a tightly knit plot is no easy task, but both Swerling (who would later receive an Oscar nomination for the Lou Gehrig bio-pic The Pride of the Yankees as well as pen the book for the classic Broadway musical Guys and Dolls) and Riskin, director Frank Capra’s screenwriter of choice, make it look easy. Over the next few years, Riskin (who won an Oscar the previous year for It Happened One Night) would perfect this formula, churning out several similarly constructed scripts, including Mr. Deeds Goes to Town and Meet John Doe. As in those films, events beyond the main character’s control thrust him into the big, scary world he has tried so hard to avoid and force him to mature.

We all associate Ford with Westerns, so it’s easy to forget what a versatile director he was. The same year The Whole Town’s Talking was released, he also helmed The Informer, a dark political drama that would win him his first Oscar. Though The Informer stands on its own as a compelling and artistic film, I wonder whether Ford’s superior work on The Whole Town’s Talking contributed to and helped seal his Best Director victory. In this virtuoso effort, his impeccable sense of comic timing, brilliant editing ability, supreme technical prowess, and talent for quietly building dramatic tension are all on full display. Economy defines the film, and there’s nary a wasted frame in it.

Best of all, the special effects that allow two Edward G. Robinsons to seamlessly share the screen multiple times are simply mind-boggling, especially when you consider just how old this movie is. Only one shot of Robinson crossing in front of himself was obviously photographed in front of a rear projection screen. All the other side-by-side and angled shots show no signs of any crude technical doctoring. Maybe during the Blu-ray restoration process some obvious optical artifacts were smoothed out, but I’m hoping that wasn’t the case. I choose to believe that Ford and his crew were just that good constructing these complex images. More than a decade later, the Bette Davis vehicle A Stolen Life would receive a visual effects Oscar nomination for doing far less of the same thing. It’s too bad that award wasn’t around in 1935, because The Whole Town’s Talking surely would have taken it home.

Ford, Swerling, and Riskin all impress, but Robinson truly amazes in his dual role. He could play the gangster part in his sleep (although he beautifully underplays here, adopting a tone of quiet menace instead of the guns a-blazing, loudmouth approach patented and preferred by Warner Bros.), but he’s especially good as the milquetoast clerk who fosters a secret admiration for his tough guy twin. He delineates both parts so well, there’s no mistaking which character he’s playing at any given time, even when he’s impersonating the other. (Twenty-eight years later, Robinson would do the doppelgänger thing again in Mark Robson’s The Prize [reviewed in this space several weeks ago], but to a lesser degree.) Though his stature as one of the finest actors of Hollywood’s Golden Age remains intact, Robinson – quite shockingly – not only never won an Oscar, he was never even nominated for one, despite crafting several worthy portrayals. You’d think the Academy would have at least given him an honorary award at some point, but that never happened either.

Jean Arthur is a breath of fresh air as the peppy, sharp-tongued Miss Clark, who’s never afraid to speak her mind. While she hadn’t yet attained major stardom – that would come the following year with Mr. Deeds Goes to Town – the actress’ beauty, warmth, gumption, lack of guile, and distinctive voice all combine to create an intoxicating screen persona that would delight audiences for the next two decades. It’s not easy to create romantic chemistry with Robinson, but somehow Arthur does, and the two enjoy a comfortable rapport. The supporting actors, with the exception of Wallace Ford and Donald Meek, aren’t particularly recognizable, but they all perform with appropriate zest.

Well, I guess I’ve talked enough about The Whole Town’s Talking, but it’s easy to palaver about such a satisfying and entertaining film. I’m pretty sure once you see it, you’ll want to spread the word, too.

The Whole Town’s Talking may be 84-years-old, but thanks to Twilight Time’s superior 1080p/AVC MPEG-4 transfer, it looks much younger. Presented in its original aspect ratio of 1.37:1, the film looks vibrant and clean, with just a few isolated specks and marks dotting the print. Grain is fairly faint, though some scenes exhibit more texture and softness than others. Despite the fluctuations, the image appears very film-like throughout. Blacks are deep, grays are nicely varied, and shadow delineation is quite good. Transitions can be a bit rough, but the special effects that allow the two Robinsons to share the screen are seamless. Overall, this is a very fine effort that will certainly please classics fans.

The DTS-HD Master Audio mono track supplies clear, well-modulated sound with a minimum of age-related surface noise. Effects like gunfire and squeaky footsteps are crisp and distinct, all the dialogue is easy to comprehend, and the musical score fills the room with ease. Unfortunately, the disc includes no supplements. 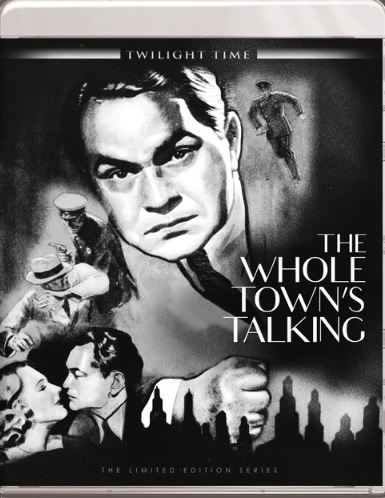