You thought he only directed musicals, right? Well, there’s a lot more to Vincente Minnelli than An American in Paris and Gigi. The father of Liza and ex-husband of Judy Garland also excelled at comedies and melodramas, and we’ll look at one film from each of those genres in this two-part post, as Warner Archive salutes the Oscar-winning director with a pair of recent Blu-ray releases.

Home from the Hill

Most people associate Vincente Minnelli with musicals… and with good reason. The man directed some of the greatest in Hollywood history, including Meet Me in St. Louis, The Band Wagon, and the Best Picture Oscar winners An American in Paris and Gigi (which earned him a Best Director award as well). Though he was brought to MGM in the early 1940s with musicals in mind, Minnelli quickly branched out into other genres. With equal aplomb, if not renown, he directed comedies (the original – and best – Father of the Bride in 1950), melodramas (who could forget Lana Turner’s psychedelic wild ride in The Bad and the Beautiful?), and bio-pics (the gorgeous Vincent van Gogh tribute Lust for Life).

Home from the Hill, based on a novel by William Humphrey, is one of Minnelli’s lesser known works, yet this textured chronicle of a dysfunctional Southern family ripped apart by infidelity, illegitimacy, and insatiable greed arguably ranks as his finest melodrama. I know, it sounds an awful lot like Cat on a Hot Tin Roof and The Long, Hot Summer (coincidentally or not, the film was released just a couple of years after those two very popular films), but while Home from the Hill traverses much the same territory, its soapy plot, large canvas of characters, and small town setting more closely resemble Peyton Place.

The Texas locale also recalls Edna Ferber’s Giant, but the men of Home from the Hill are hunters, not oil barons, and the issues the film addresses don’t go beyond family strife. Robert Mitchum gives one of his best performances as the macho, womanizing Wade Hunnicutt, the richest man in a backwoods town and a guy who takes what he wants without caring who gets hurt. His wife, Hannah (Eleanor Parker), can barely stand the sight of him, and his naïve, “soft” son Theron (George Hamilton) badly needs some testosterone injections. Studly hired hand Rafe Copley (George Peppard) is unerringly loyal, and we soon discover why. He’s Wade’s illegitimate son from a fling with a Spanish housemaid. Much to Rafe’s frustration, the cold-hearted Wade refuses to recognize him. When the ugly secret comes out, Theron turns against the dad he worships, and the lives of all the Hunnicutts – and several townspeople – change forever.

Though he was often guilty of wielding a heavy hand when it came to drama, Minnelli shows admirable restraint here. He wrings sensitive portrayals from everyone in the cast. Aside from Mitchum, who walks the tough-and-tender tightrope well, the two Georges – Peppard and Hamilton – impress the most. In later years, Hamilton became more famous for his omnipresent tan and obsequious charm than any acting ability, but his work in Home from the Hill proves just how good he could be in the hands of an A-list director. (Hamilton was just 21 at the time and appearing in only his second feature film.) The strapping Peppard was a decade older, but also just starting out (Home from the Hill was his third film), and his dashing good looks and natural, sincere air undoubtedly led to his casting in what would be his breakout film, Breakfast at Tiffany’s, a year later. I usually love Eleanor Parker, but she’s the weakest link here. The three-time Best Actress Oscar nominee (who’s probably best known as the hoity-toity, somewhat bitchy baroness in The Sound of Music) seems like she’s gunning for another nod, but in the process goes overboard in several scenes and sports one of strangest Southern accents I’ve ever heard.

Home from the Hill was a pleasant surprise for me, and hopefully this Blu-ray will give it the second look it so richly deserves. The film starts slowly, but the screenplay by Harriet Frank, Jr. and Irving Ravetch (Hud, Norma Rae) builds to a startling climax, and a couple of loose plot strands at the end help Home from the Hill resonate far more than others in its genre. Minnelli may not have been as masculine a director as John Ford or Raoul Walsh, but he attacks this material with appropriate vigor and proves without doubt that he’s far more than a musicals man.

Warner Archive brings Home from the Hill to Blu-ray with an attractive 1080p/AVC MPEG-4 transfer that looks beautiful on a large-screen display. Contrast and clarity are quite good. Colors are bright, if not especially lush. Only a few errant marks dot the pristine source material. A bit of noise appears on solid backgrounds now and then, and transitions are grainy, but close-ups are quite sharp, flesh tones appear natural, and background details are crisp.

The DTS-HD Master Audio 2.0 track enjoys a fine stereo presence, with lots of separation across the front channels, lending this widescreen movie an appropriately expansive feel. Dialogue is clear and easy to understand. The music score by Bronislau Kaper sounds rich and full, and no age-related surface noise intrudes. Sadly, the only supplement is the film’s original theatrical trailer. 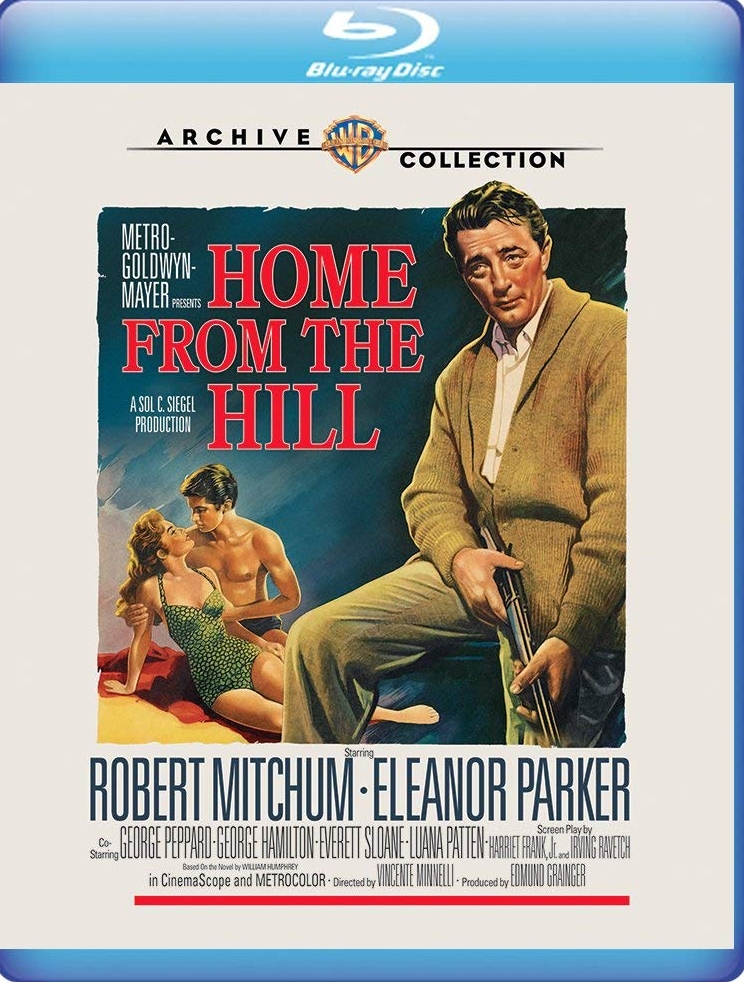 Home from the Hill Blu-ray – Buy at Amazon